As is typical for December here in Central Texas, our roller-coaster weather has delivered a couple of light freezes, but also record warm temperatures.   Native plants and their companion critters have evolved to roll with that coaster, continuing the blooming and the pollinating actions well into late autumn.

On a windy afternoon, I watched this tiny Common Checkered Skipper, Pyrgus communis, flit near to the ground while visiting the remaining open blue blossoms of Gregg’s Mistflower, Conoclinium greggii, and sometimes alighting on the driveway, wings spread to catch the rays of the sun. 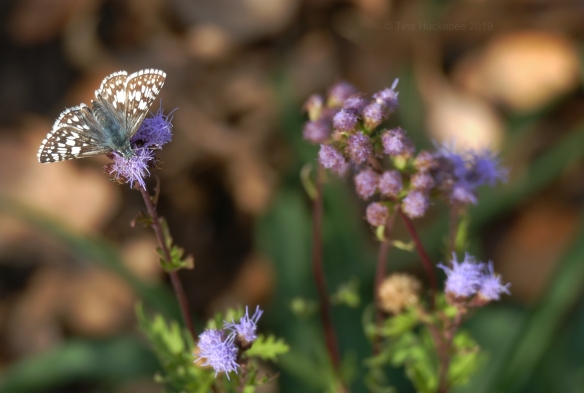 This particular mistflower is a relatively new addition to my garden.  Gregg’s has grown in my back garden and there are still sprigs which pop up, but with increasing shade,  those individual mistflower stems are growing less and blooming only sporadically with each passing season.  I was determined to find a place in my shady garden to grow Gregg’s Mistflower and with some rearrangement of the garden furniture, I opened a spot in my front garden for the perennial groundcover, alongside the driveway and adjacent to the street, where full sun and reflective heat will be a boon to this tough, lovely native Texas plant.

Gregg’s Mistflower is a powerhouse pollinator plant.  All sorts of butterflies, big and small, colorful and plain, love this sweet-nectared pretty.  The original Gregg’s in my back garden–a passalong plant from a friend–blooms a paler blue flower and with brighter green foliage.  This new plant–purchased from my favorite local nursery–sports deeper blue-purple blooms and a richer green foliage. I bought a new plant because I didn’t want to transplant the sprigs, with their bits of root, from the back garden so close to winter and possible killing frosts.  Those stems of plant-with-roots might have survived winter, but I didn’t want to take the chance on their succumbing to a freeze, delaying growing Gregg’s in the front garden.  The gallon pot of Gregg’s Mistflower will go dormant with a hard freeze, but its full, lush root system will allow the perennial to reemerge with strength in spring, ready for a new year of blossoms and food for bees and butterflies.

Despite the strong breezes, the Common Checkered-Skipper seemed besotted with its choice of meal.  The host plants of this skipper species are several in the Malvaceae family, but adults nectar from a wider variety of blooms, including many in the Asteraceae family–like Gregg’s Mistflower. 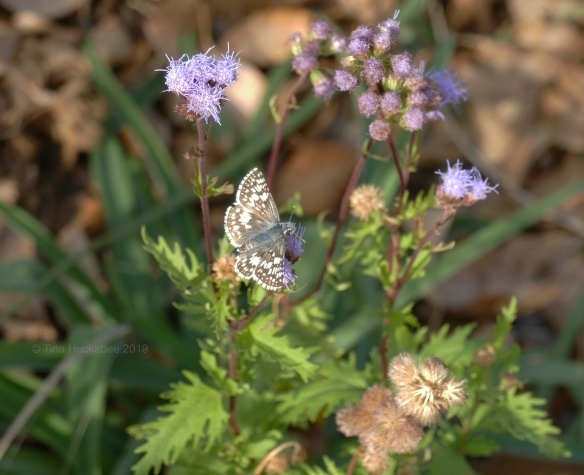 The skipper’s blue-tinged hairy topside suggests a male; female Common Checkered Skippers’ hairy parts are black. This fella spent a minute or two on the fuzzy blooms it visited, working each in full before moving on.   I was pleased (and surprised!) with these shots, as the wind was challenging to catching the skipper in something other than a blur. 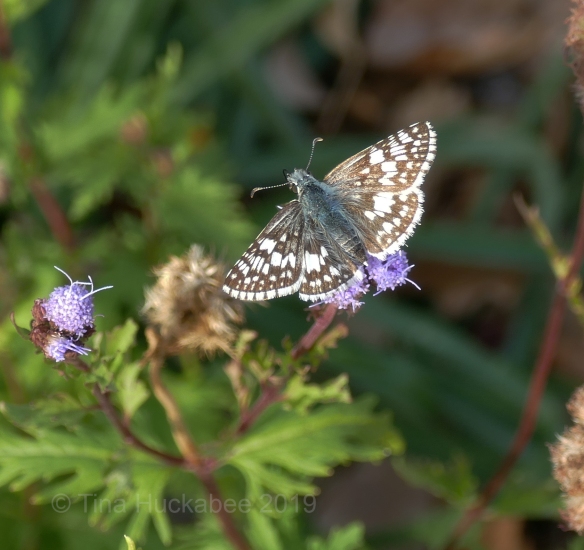 Native plants and their critter companions are vital for a healthy environment.  In this garden vignette, both the bloom and the butterfly were hard at work, doing their jobs:  the blooms, providing nutrients and sustenance for the insect; the insect, partaking from a food source for its own benefit, but also, providing the impetus for the production of more mistflower by the action of pollination.  The plant and its insect continue a time-honored cycle and add beauty to the world.

And isn’t that what gardening is all about?

The rare August cool fronts which have stalled over Central Texas in the past week or so have brought welcomed rain to the hot August days…and nights, (with apologies to 1972 Neil Diamond). Between the drips, drops, and gushes of rain, coupled with sparkles of Texas sun which has filtered through from time-to-time, foliage in my Austin, Texas garden is washed clean of summer’s dust and birds’ poop.

Purple heart plant, Setcreasea pallida, is a native to Mexico, but a naturalized plant throughout much of the southern United States.

The foliage is of this shade and sun groundcover is purple, but other subtle coloring imbues the plant with opalescence.

It’s a great ground cover for this area, one that withstands the capriciousness of our climate–drought, heat, flood, and freeze.  Once established, it spreads with glee and requires reining in on a seasonal basis.  It seeds out sometimes, like in this container of Texas beargrass, Nolina texana.

I’m pleased that the Purple heart chose a purple pot to settle in.

Purple heart is one of the few non-spiky, non-green, hardy perennial choices available for this region and adds purple pizzazz to any garden. 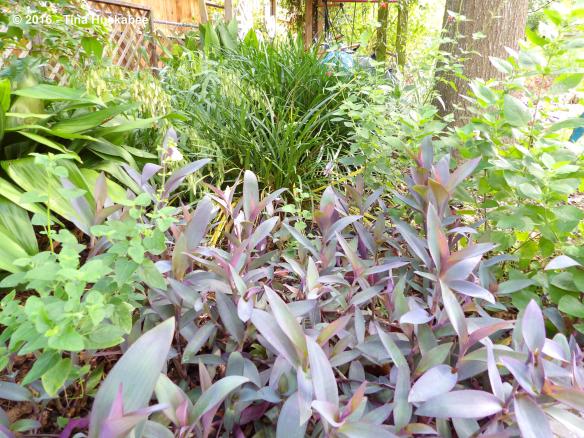 Dianella’s snazzy green and white foliage stripes cheer several spots in my garden and bring needed structure to predominately shrubby plant combinations.  I usually plant three or four together for a dramatic effect.

Dianella is water-wise and low-maintenance during our hot summers, though it needs covering during winter freezes.  I find this plant well-worth winter babying because it’s light and bright and complements other plants. Dianella also produces flower stalks with tiny blooms atop, though most gardeners plant it for its foliage. 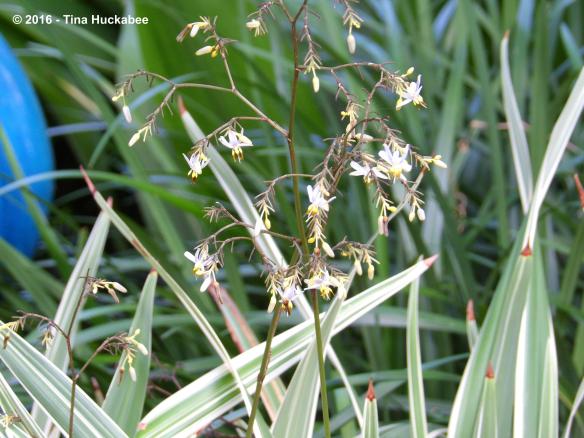 A native member of the Liliaceae family, Texas Craglily, Echeandia texensis, is about to begin its blooming cycle, but the foliage is lush from late spring until frost. 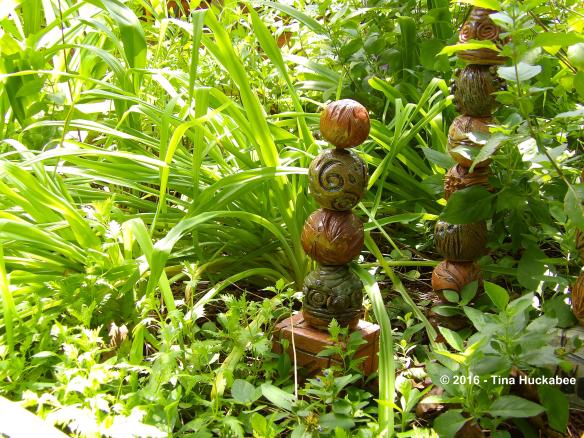 I’ve planted a number of these over the years and enjoy their contribution to my garden.

One group of Texas craglily is situated with the also fall-blooming Gregg’s mistflower, Conoclinium greggii, whose foliage inspires common names such as Palm-leaf mistflower and Palm-leaf thoroughwort because of the palmate shaped leaves.

Pink-n-green-n-white is always a winning color combo, but especially so  in this recent impulse-purchased and potted Sedum spurium ‘Tricolor’. 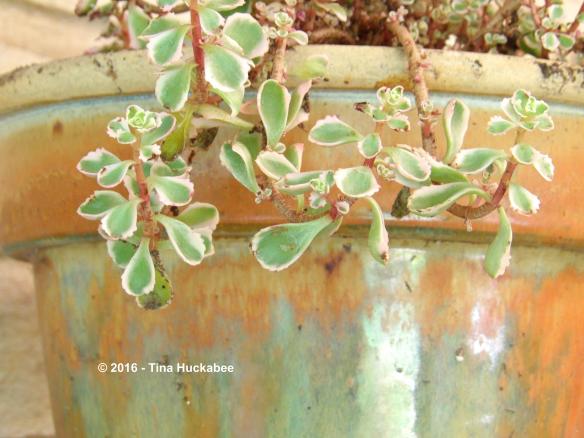 I’m hoping for a glorious draping here and to not over-water the pot.

Finally, a capture of the harbinger of November’s autumn leaf change floating in a bird and bee bath.

In November, foliage change in my garden will be about the less direct sunlight and cool temperatures. But this American sycamore, Platanus occidentalis leaf is probably a victim of the pre-rain Texas summer sun and heat.

Thanking Christina and her lovely Creating my own garden of the Hesperides for hosting, check out her Garden Bloggers’ Foliage Day post for a look at foliage in many gardens , from many places, and then share your leafy loveliness.

It’s that time of year again:  Monarch butterflies, Danaus plexippus, are migrating through Texas on their way to winter in Mexico.  And what nectar delights do they partake of in their nutritional pit-stops?  Many blooming things, but they prefer sipping from native flowers and high on a list of favorites is the Gregg’s Mistflower, Conoclinium greggii.

As part of the 2015 celebratory edition of Texas Native Plant Week, let’s take A Seasonal Look at this gorgeous native ground cover–friend to gardener and pollinator alike.

It’s October and even in my part-shade garden, the Gregg’s Mistflower blooms up in fuzzy, lavender-blue gorgeousness. 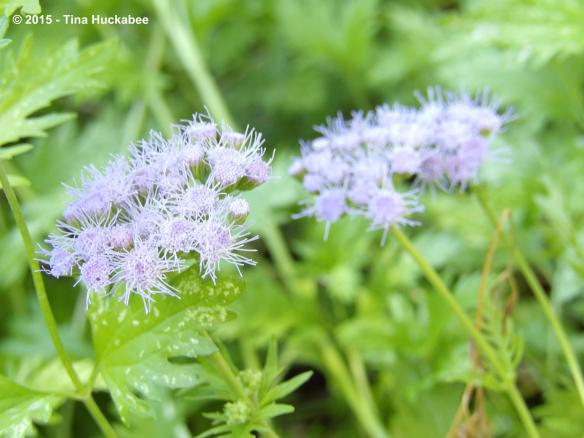 Mid-September through Mid-November hosts the peak flowering for this tough and lovely native Texas-to-Arizona plant.  In its native range,  Gregg’s Mistflower is perennial and acts as a ground cover in the garden, reaching a height of only about 12 inches during its blooming period and spreading to cover as much or little space as the gardener will tolerate or encourage.

A member of the Asteraceae family,  the flowers are gorgeous, showy, 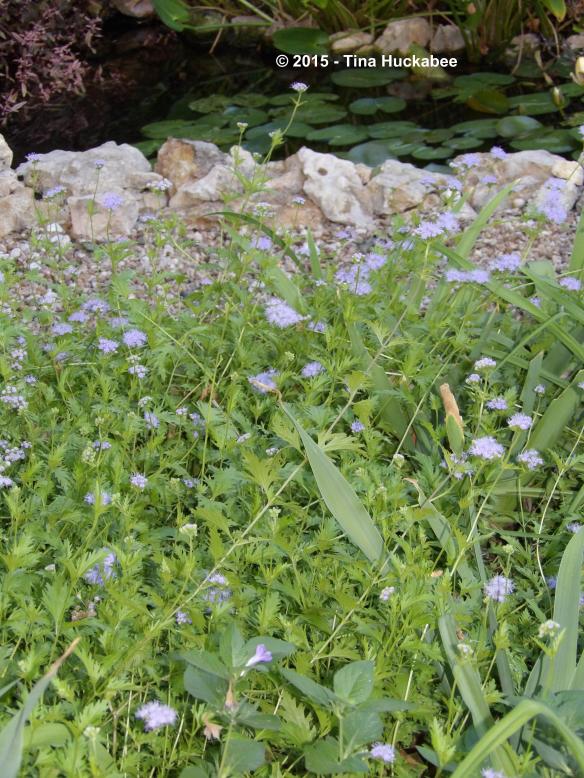 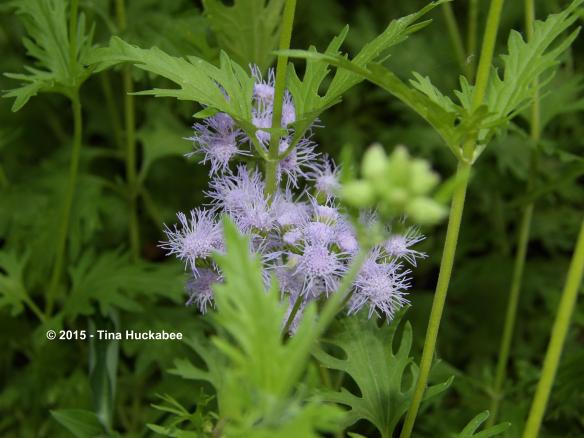 …and unusual. Additionally, they are constantly visited by many a pollinating critter. 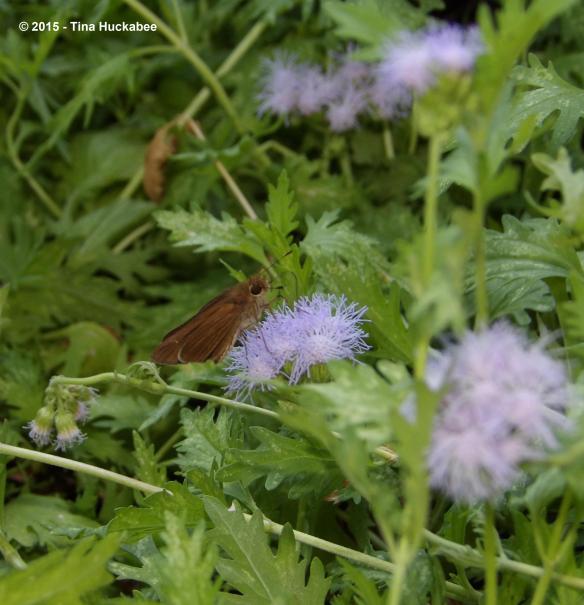 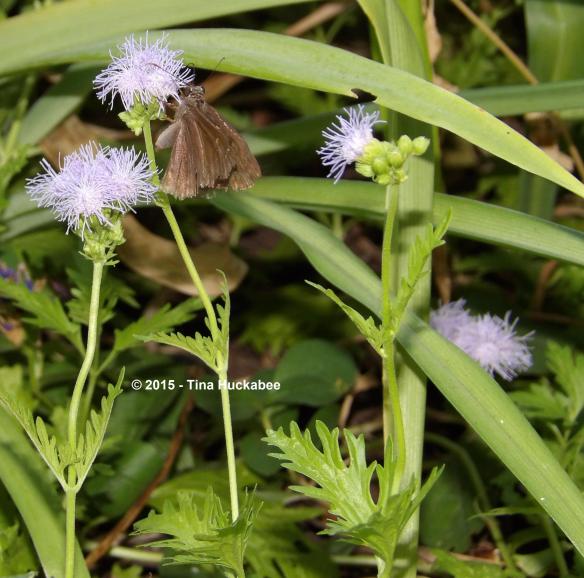 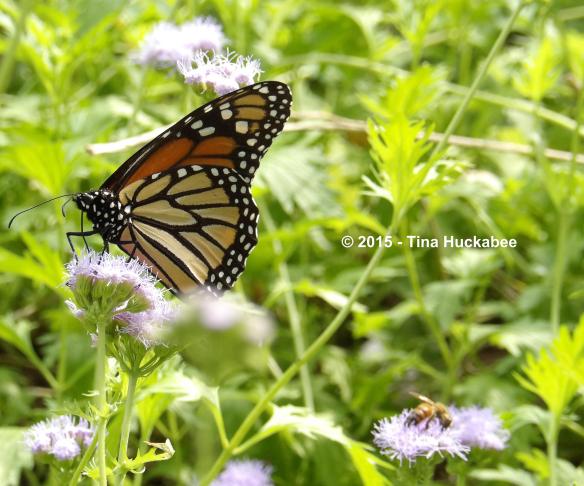 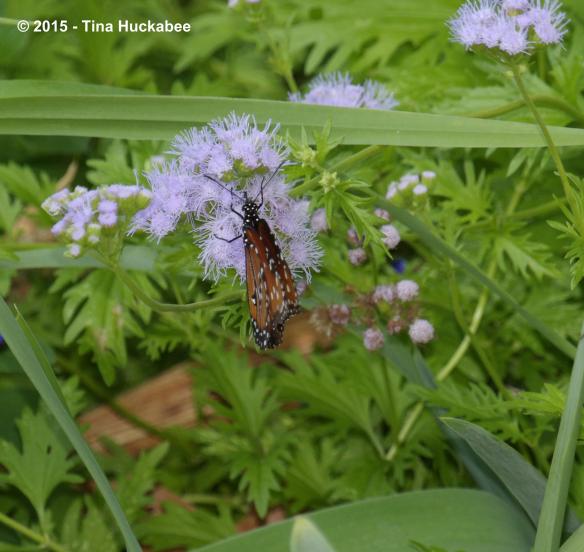 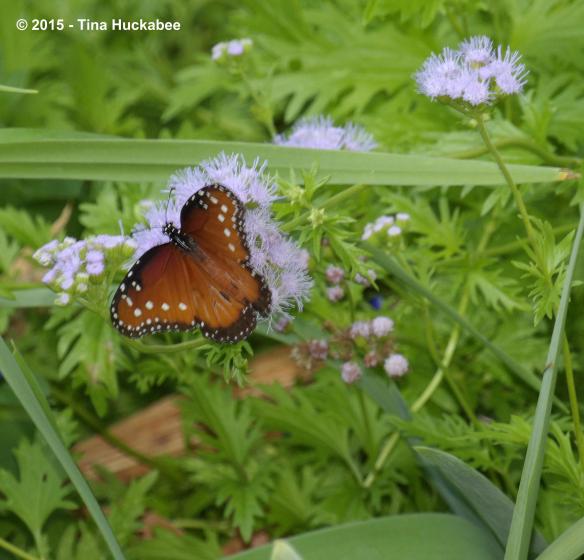 I planted my G. Mistflower group from passed along sprigs with healthy roots attached, and have, in turned, gifted to other enthralled gardeners seeking beauty in botanic and pollinator form.  The flowers are what most gardeners prize the Gregg’s for, but it is generally a no-fuss plant–it carries no disease problems and is a water-wise addition to any Texas-tough garden. 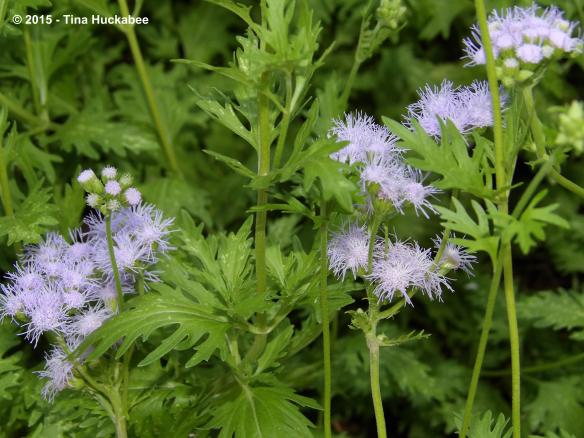 Once its flowering has peaked, the fuzzy blooms fade to a tawny beige.

I find the spent blooms quite attractive and I have witnessed finches sneaking snacks from the seed heads. 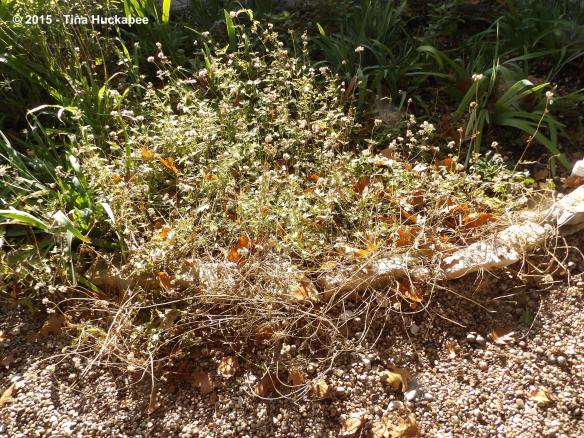 After the first hard freeze and subsequent foliage drop, the color of the spent blooms lighten just a bit.

Through December and January, the seed heads become more fragile and begin dispersal.  I’ve never experienced Gregg’s Mistflower re-seeding into other parts of my garden, or elsewhere for that matter.  In my garden it spreads primarily by the roots in the immediate vicinity of the mother plant.  Due to lazy-gardener syndrome,  I usually leave the thin and fragile remains of Gregg’s Mistflower, seed heads and stems, mingling with the fallen foliage from deciduous trees through the course of winter. 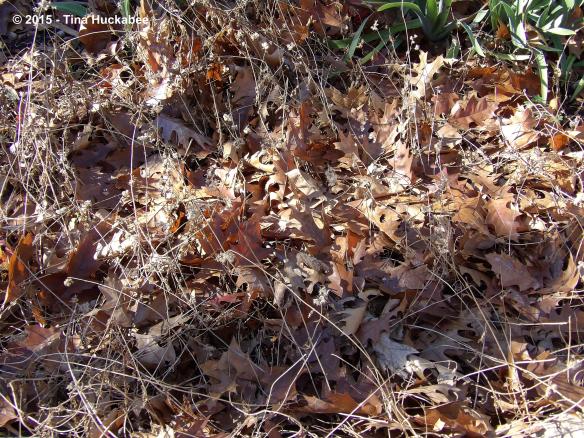 I become serious about clean-up only upon arrival of the first spring growth.

Since Gregg’s Mistflower is dormant during winter, you might want to plant companions of non-native, but evergreen Iris, or native and evergreen Cedar Sage, Salvia roemeriana, Lyre-leaf Sage, Salvia lyrata, or Gulf Coast Penstemon, Penstemon tenuis–all which are spring bloomers–allowing for seasonal interest when Mistflower is dormant.  Additionally, by planting evergreens along the edges where you want to limit the spread of Gregg’s Mistflower, you can give a sense of structure to the garden.

Once the warmer temperatures return and spring growth is well-underway, Gregg’s Mistflower grows quickly–adding plenty of filler foliage to augment spring’s beauty. It is a plant that requires some tidying around the edges so that it doesn’t insinuate itself too much out of its desired range, but is easily controlled by simply weeding out the wayward growth and passing along to other native plants gardeners! 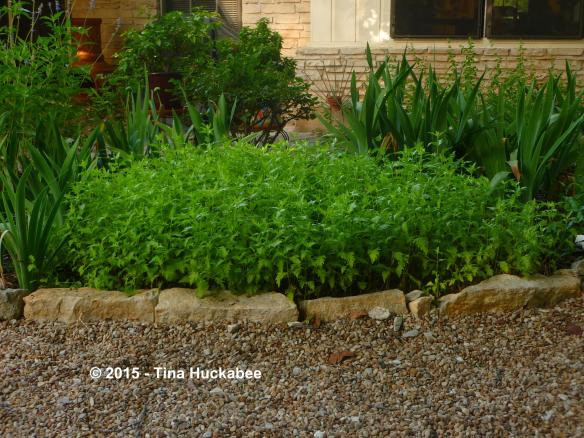 The foliage is a stunning bright green and is lobed, or palmate, in shape.

Its other common names (aside from Gregg’s Mistflower) pay homage to the palmate foliage. Names like Palm-leaf Mistflower, Palm-leaf Thoroughwort, Purple Palmleaf Mistflower, Purple Palm Leaf Eupatorium are certainly descriptive, though I’m personally fond of the “Gregg’s”.  Named after Josiah Gregg , who was one of the 19th century naturalists who traveled throughout Texas and catalogued  plants (and other things as well), Gregg’s Mistflower is one of many plants named in his honor.

Gregg’s returns from dormancy rapidly and usually there are smatterings of blooms during spring and summer, but the real flower-power show begins in August, picking up blooming steam during September and October, with a slacking off as November strolls through the garden. 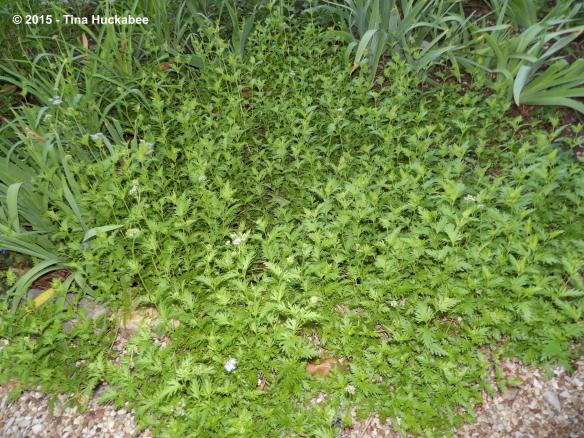 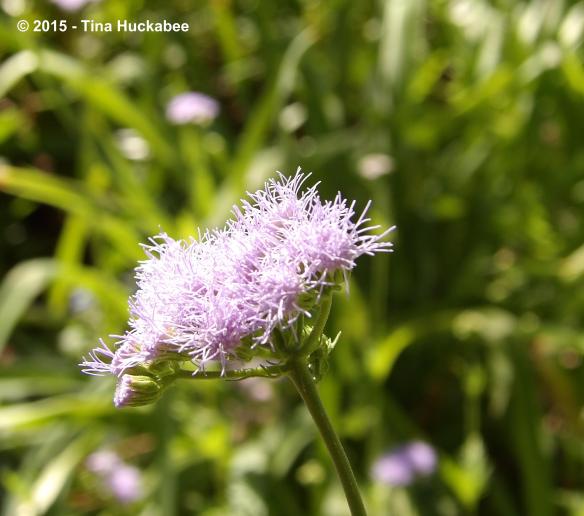 Gregg’s Mistflower is not only an excellent pollinator plant, but also the host plant for the Rawson’s Metalmark Butterfly, Calephelis rawsoni.

Gregg’s Mistflower grow and bloom best in full to part sun, but will take shade.  In a garden that I once managed at Zilker Botanical Garden, one group of Gregg’s Mistflower grew in light shade–it received no direct sun throughout the day.  The foliage was lanky, but still attractive, and the blooms appeared, less abundantly, but on schedule during the autumn months, just like its brethren growing in more sun. In decent soil, this hardy plant only takes about two years to cover a 4×4 foot area. With rockier soil or a shadier spot, the Gregg’s Mistflower covers a similar patch more slowly.

If you enjoy (snort!) deer visiting your garden, be aware that they’re likely to nibble your Mistflower, so if you can grow it in a spot where the ungulate beasties can’t get to the plant, you’ll be a satisfied gardener, even if you’re frustrating your deer visitors

Gregg’s Mistflower, Conoclinium greggii, is a plant that works in any Texas garden, sun or shade, rocky or clayey, formal or casual, and is coveted by pollinators and gardeners. 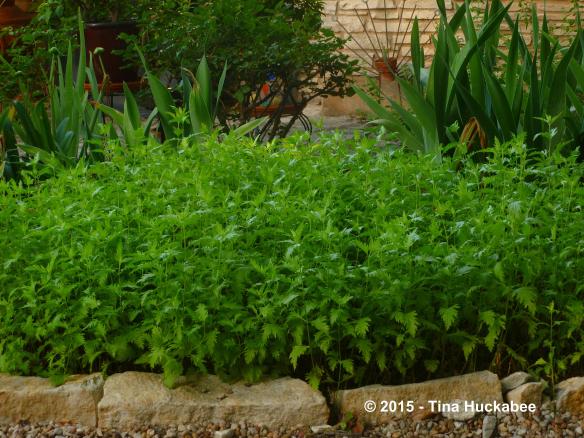 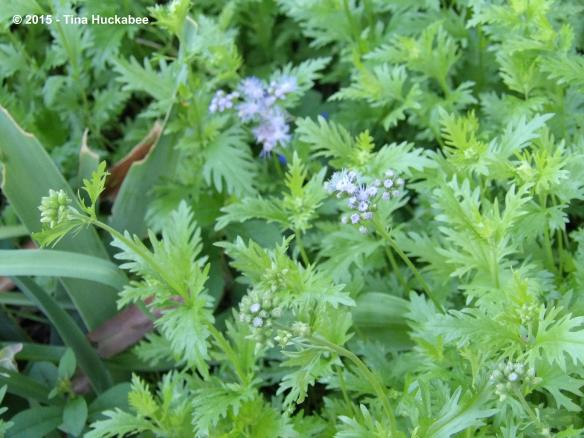 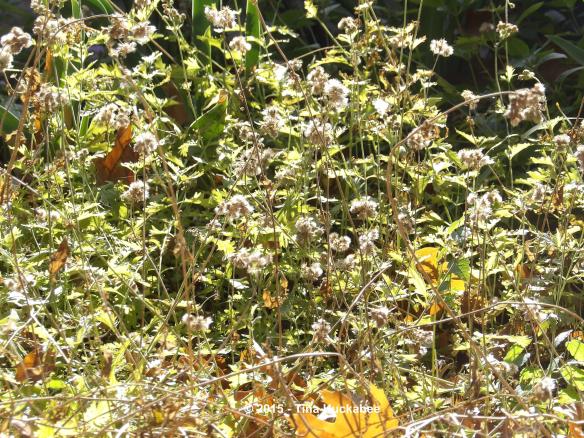