With apologies to Billy Wilder and his silly romcom, Some Like It Hot,  I can’t think of a more appropriate title for this edition of Wildlife Wednesday.  Here in Austin, Texas we’ve sweltered through 15 consecutive days of over 100°F (37.7°C) temperatures, with 20 some-odd days over 100º in total for the summer.  On one of those days, the temperature reached 110ºF (43ºC).  Sadly, that’s not a record breaker, (it’s 112F in 2011) but it was oven-like nonetheless.  And, August is just beginning.

These days in Austin, it’s not unusual to experience many days reaching over 100ºF and while that’s concerning, so far this summer the wild critters in my garden are weathering the blistering heat just fine–they thrive with available water sources, cover in the guise of trees and shrubs, foods in the form of seeds on perennials (and some in a bird feeder), and places to nest.

I lost my main passion vine (Passiflora caerulea) during some hard freezes this past winter, so I haven’t enjoyed viewing as many Gulf Fritillary butterflies,  Agraulis vanillae,  as I usually see. Passion vines are the host plant for these orange beauties. Recently though, one or two Fritillaries have appeared and are laying eggs on a few sprigs of a second, and different, passion vine which volunteers in an open area of my back garden.  This Purple passion-flower, Passiflora incarnata, doesn’t bloom in my garden, but boasts enough foliage for the caterpillars to partake of on their way to adulthood. 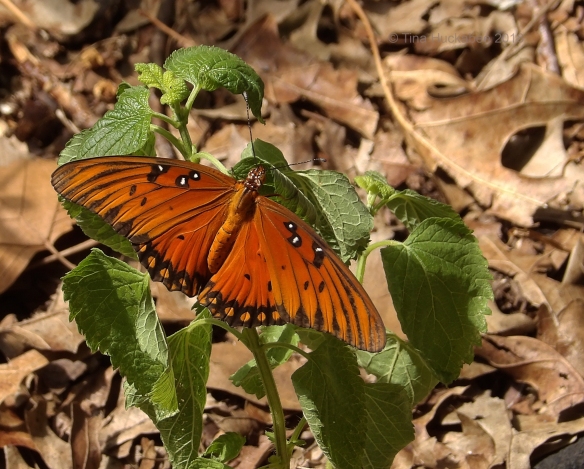 This Gulf Fritillary rested on a plant near to where the passion vine grows. Had it just emerged from its chrysalis?

I’m fairly sure this plain little thing is a Dun skipper, Euphyes vestris, but I’m not positive.

It worked the blooms of a salvia and stopped just long enough for me to snap a shot.

I don’t see American Snout butterflies, Libytheana carinenta, very often, so it was a treat to see this one on the foliage of one of my Softleaf yuccas.

I kept my distance and never successfully captured the butterfly with wings spread because it flitted away warily from the weird woman stalking it through the garden.  Snouts’ host plant is the Common hackberry, Celtis occidentalis, which is a tree that many modern Texans hate. Hackberry trees seed out everywhere and often in less-than-desirable spots, but they’re an important wildlife food source.  Along with the Snout, Hackberry trees also feed the Question Mark and Mourning Cloak butterflies, as well as providing fruit and shelter for birds.  Native Americans didn’t hate the Hackberry and used it for medicine and food.

The bits of missing wing didn’t slow down its nectaring and pollinating mission.   It favored the sunflowers which are still in bloom.

I’ve had a difficult time identifying this petite pollinator, but I think it’s a Eufala skipper, Lerodea euflala. 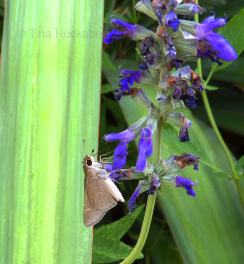 Eufala skippers are considered “grass” skippers, as their host plants are grasses like Johnson grass, Bermuda grass, and sugarcane.  Both Johnson and Bermuda are common in Central Texas, but I don’t grow either in my garden.

Here’s yet another I dunno what this is, but firmly in the native bee category.  I thought she was one of my ubiquitous Horsefly-like carpenter bees, but she’s not quite that big.  She buzzed around the very pink Rock rose flowers, snuggling in to the reproductive parts of the flowers and covering herself with pollen,

…and showing me her backside. 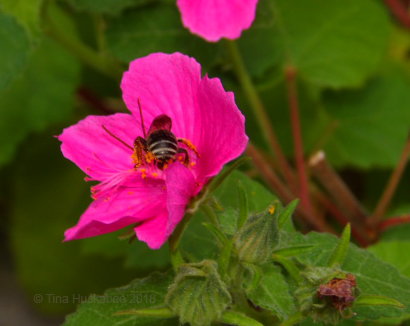 I think she’s in the Melittidae family which collect pollen on the hairs of their bodies and nest in the ground.  She was fast flyer and a busy, busy bee.

This diminutive, metallic-green sweat bee sported loaded pollen baskets, full-to-bursting with creamy white pollen.  As I watched her, I think she was resting and not collecting pollen, on the end of the Mexican Orchid bloom stamen.

I’ve been privileged to observe a couple of big, beautiful Southern Carpenter bees, Sylocopa micans,  in the last couple of weeks.

Stunning black with a blue sheen on their wings and bodies, these bees have moved with intention through the Turk’s cap shrub, from red bloom to red bloom.  At least in my garden, the Turk’s is the clear favorite of these bees.  This bee species utilizes buzz pollination–a particularly efficient form of pollination–and as I observed the two visiting, I could see and hear that buzzing on the flower.

Hummingbirds are not bees (duh!), but they sure are buzzy as they zoom through the garden, and this summer, they’ve been in abundance.  This female, probably Black-chinned hummingbird, also worked Turk’s cap blooms.

Have I mentioned that Turk’s cap is a fabulous wildlife plant?

I don’t typically hang a sugar water feeder out for the hummers.  I have nothing against hummer feeders and they’re great for attracting and supplementing the tiny birds’ diet, but I’ve found that hummers prefer what I’ve planted in my gardens and don’t visit the feeders when I’ve placed them.  That said, the sugar water is important for hummingbirds, especially as they ramp up for their fall migration southward.

Volunteer sunflowers are still blooming, but the spent blooms are also setting seed.  A variety of birds feed on these seeds including ones like this female House Finch, Haemorhous mexicanus, 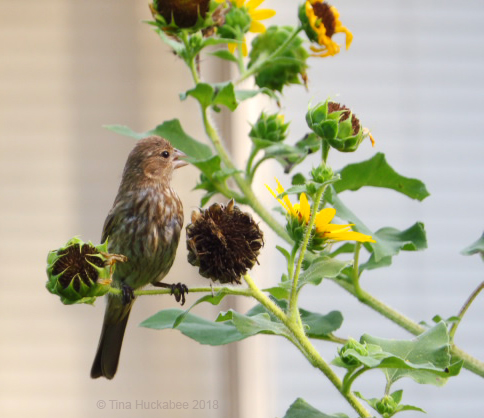 I’ll leave the stalks up until all the blooms are done and the seeds eaten.  Then I’ll cut back the stalks to about 2-3 feet tall and leave some on the ground, so that insects (native bees, primarily) can utilize the hollow stems for nesting through fall, winter, and next year’s growing season.

A pair of Carolina wrens, Thryothorus ludovicianus, nested nearby and are teaching their 2(?) chicks how to manuever through the neighborhood.

I’m confident this cutey is junior, baring his belly in birdly pride as mom and dad wren perched close by, chchchhching at me, while I snapped this shot.

This Green anole lizard, Anolis carolinensis, can’t decide whether to dress for the heat in green or brown.

I didn’t hang around long enough to observe, but I’ll bet it chose the green outfit to fit in with the surroundings.

No matter if your garden is deep in the dog days of summer or chilling in the depths of winter, what wildlife happenings did you share in or observe this past month?  Please post about your wild happenings and leave a link when you comment here–and happy wildlife gardening!