I’ve long thought that naming wildlife an unwise practice.  When I first installed a water fountain at my back patio, we purchased three “feeder” goldfish which the kids and I named.  The fish didn’t last long, as one of our dogs decided that sushi was something he enjoyed.  Once our pond was built and we had even more fish we could name–at first, koi, and later, goldfish and gobs of gambusia (mosquito fish), I’ve steadfastly refused to name even one of the swimmers.  Herons, plain bad luck, as well as old age, all end the fish and I don’t want to lament their loss by name.

The same is true for my regular bird visitors.  I’m fond of the pairs of Carolina Chickadees and Wrens, and Black-crested Titmice, and many others, who I see in my garden.  I’m charmed when they bring their babies to visit and feed in late spring and summer, enjoying the this is how you survive lessons imparted by the excellent parents to their eager and darling offspring.  But I dare not name any one of them.  Ditto for the wintering warblers who daily flit in the garden from November through May.  I already miss them when they leave to wing northward for summer;  how much more would I regret their flying the garden nest if I called them Joe or Rufus or Abigail?

So why name the Eastern Screech-Owl couple who, it appears, are (perhaps?) in the process of choosing to raise a family in my garden?

In a word: weakness.  And, maybe a second word: affirmation. 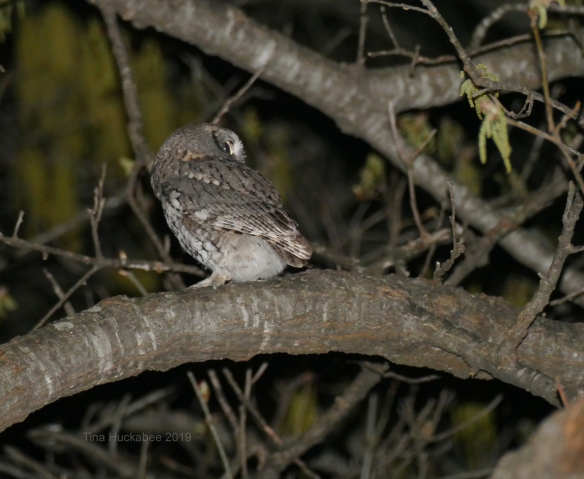 The male, Hoot, guarding the nest box.  He wasn’t interested in showing me his pretty face, but I can share his beautiful wing plumage pattern with you.

Annie, trying the nest box on for size. She was tolerant at my photo taking, but I didn’t bother her much–just enough to get this shot.

Here’s a look from our owl cam. What you’re looking at are her tail feathers–her head is looking out the nest box hole.

There are several problems with the conferring of these names, notwithstanding the stupidity of  perceived control.   Firstly, Eastern Screech owls don’t hoot, they trill (in varying forms), and they also make bill claps and low chuckling sounds.  Check out this link to Cornell Lab’s Eastern Screech-Owl sounds to understand what we’ve been hearing for a few weeks now and why “Hoot” is a goofy–and erroneous–name.  Secondly, the life of Screech-Owls is fraught with danger.  Of course that’s true of all wildlife, thus the wisdom of not naming the wild critters in my garden.  We can provide the right habitat,  day and night, but we have little influence over their destiny.  Cars, bigger owls (there’s a Great Horned Owl pair in our neighborhood), and maybe rat poison, are all hazards to Screech-Owls.  Also, Screech-Owls are risks to the smaller birds, toads, and insects in and near my garden.

And so it goes with the wildlife food web.

But I have hope and a sense of reassurance with this particular canoodling pair of owls.  It’s been a few years since we’ve enjoyed the privilege of intimately observing the shy, elusive night birds–more about that at another time. The previous owl pairs were always Mama Owl and Daddy Owl, and except for the last clutch of Screech-Owl fledglings, I never named the babies.  But the dearth of owl watching and owl learning in the last two years renders me sentimental and hopeful about their recent presence in the garden. The strong bond between adults, their focused and shared care of chicks, and their important contribution to diversity of the wild community (of which my garden is a small part) is heartwarming and affirming.  Appreciation of the natural order continues, as (selfishly) does my own education and enjoyment.

If the Screechies move in and raise their family, a kind of avian hootenanny in celebration of life’s dance of diversity and songs of progress will be in place, at least for a specific time and type.

I’m glad to join in today with Anna’s Flutter and Hum and her wonderful Wednesday Vignette.  Please pop over for garden, nature, and other musings.

Addendum:  It appeared as if Hoot and Annie were settled in and comfortable in the owl house.  But one evening in early March, I strolled the garden;  Annie was in the box and looking out. She saw me and immediately took flight.  From that point forward, the owls didn’t inhabit the house, though on a couple of occasions, I saw an owl before dawn perched just outside the box and from time-to-time we’ve continued to hear at least one of the owls trilling.

It’s now three years since an Eastern Screech couple has successfully raised a brood of babies.