I have no idea if this little fella is actually sweet, but he’s definitely cute.

This is a Black-crested Titmouse, Baeolophus atricristatus, and these charming birds are residents in Central Texas;  several are daily visitors to my garden.  Black-crested Titmice range from Central Texas to northern Mexico and are comfortable and common in urban settings.  Tiny song birds with loud and melodious voices, their diet consists of insects, especially caterpillars, but they’ll also favor feeders. 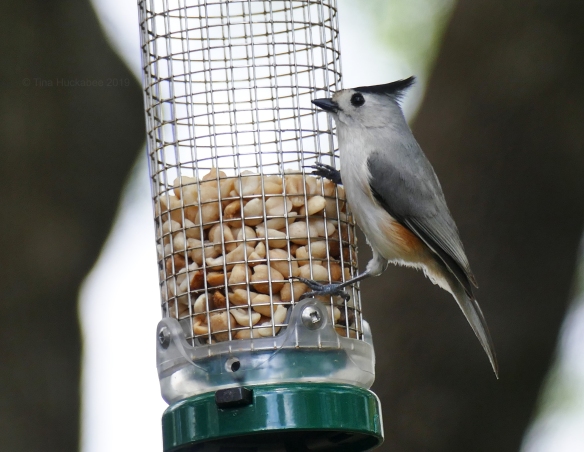 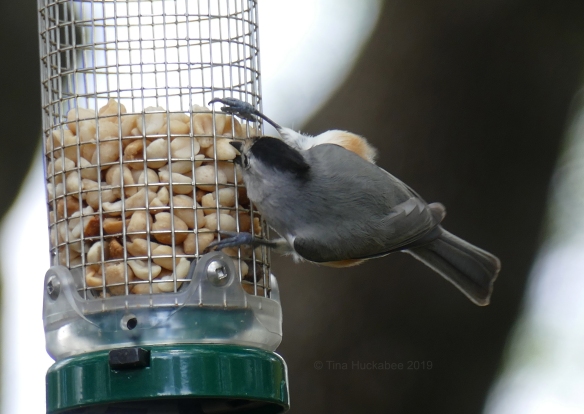 Titmice in my garden enjoy the black-oiled sunflowers, but recently I purchased a peanut feeder and it’s become the premier dining choice of titmice customers. 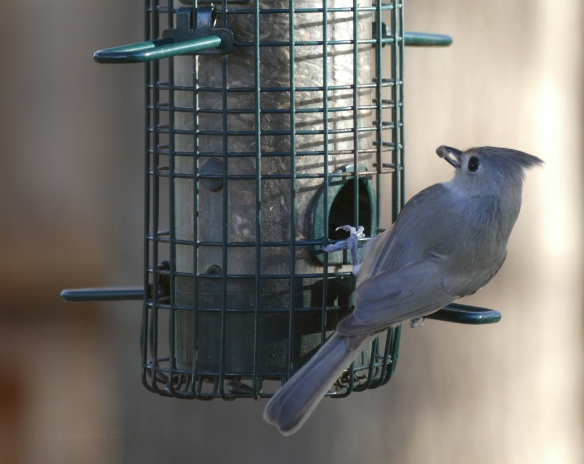 You’ll notice that the bird in this photo looks slightly different from the one in the previous photos; notably, this titmouse doesn’t have a black crest.  As there’s some color differentiations between the two and that I’ve observed courting behavior, I assume the two are mates.  I figured that this not black-crested titmouse is female and the other one–sporting the jaunty, black crest–is male.  After researching both Audubon and Cornell Lab of Ornithology sources, I now think that the presumed female is in fact, a Tufted Titmouse, Baeolophus bicolor, or possibly a hybrid between the Black-crested and Tufted. The Tufted Titmice spans a greater range in North America than does the more geographically limited Black-crested Titmice, but these two distinct species share overlapping territory in Texas and breed successfully, creating hybrid offspring.  In past years, the titmice in my neighborhood that I’ve observed have all been of the Black-crested sort, so I think that this bit of Tufted Titmouse is a new thing in my garden.

Aside from the lack of black crest, the Tufted also show black coloring above their beaks, whereas on the Black-crested, the same area is white to cream-colored.  In this series of shots, the female is a bit darker above the beak than is her male partner. 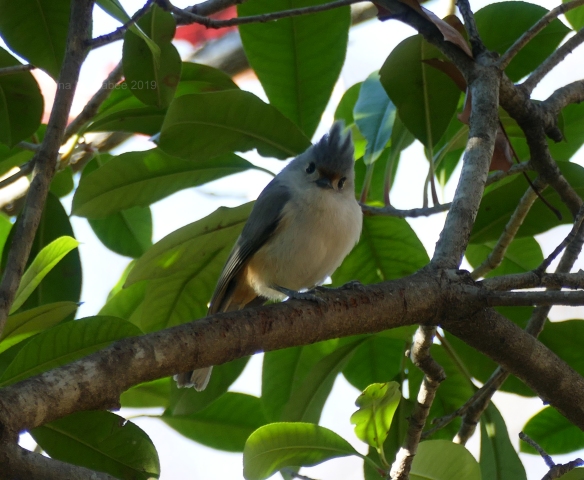 What’s not to love about that face?

Even without the black crest, she’s darling!  In these shots, she was resting in a shrub just above where the black-oiled sunflower feeder hangs, biding her time and keeping watch for a safe foray to pop down and snatch a seed. 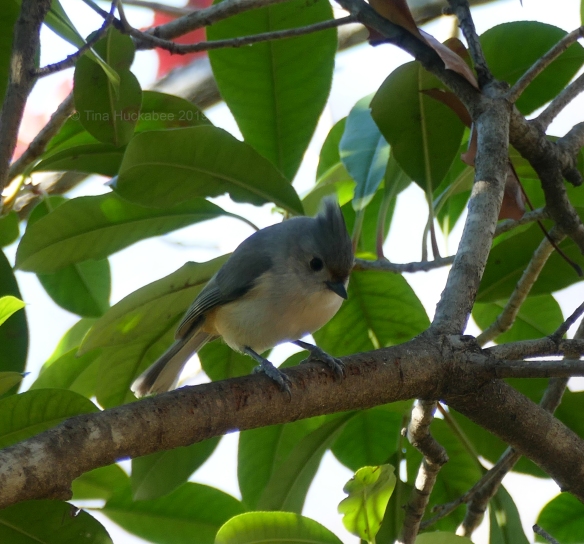 Success! She flew to the feeder, grabbed a seed, and flew back again to foliaged safety, pounding the seed open, then gobbling the meat inside. 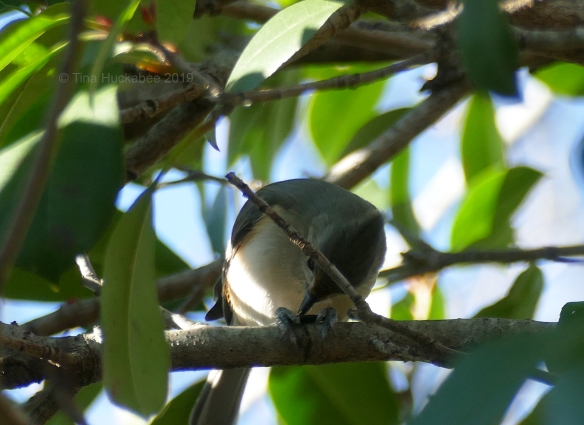 Aside from partaking of seeds and peanuts, titmice hop along the branches of trees–right side up and upside down–eating a variety of insects.  When I spot that, I usually forgo the camera and grab the binoculars, as their acrobatics are quite fun to watch, even when they are partly hidden by foliage.

Last spring, I wrote about a pair of Titmice who built a nest in a nest box in my front garden.  Alas, the local House Sparrows bullied and harassed them until they abandoned that nest.  Late in spring, I cleaned out the nest box and there were three little speckled eggs.  Sniff. 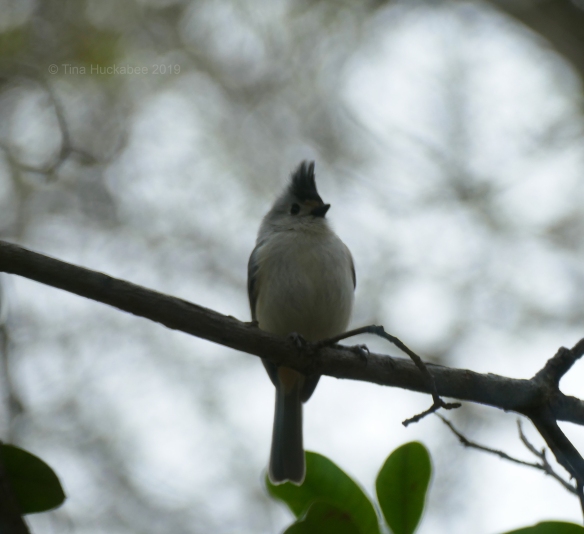 A rare, quiet moment for this titmouse. They’re always on the move–hopping and fluttering from place to place. They are busy birds. 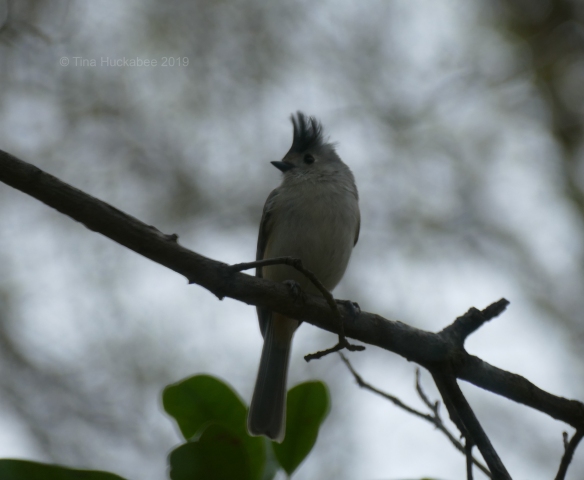 A puff of wind ruffles the crest, but it’s still a good feather day!

This spring, I haven’t witnessed any birds who are interested in that nest box, but I’m sure the pair who visit my garden are nesting somewhere in the neighborhood.  They typically choose tree holes, or empty woodpecker holes, as well as settling in nest boxes–except mine, it seems.  Grrr!

One of the hallmarks of titmice nests is that they use animal fur for lining.  There are videos of titmice pulling fur from wild animals and dogs and it’s adorable to watch these wee scamps raiding mammals’ coats!  Relatives of the Titmice, Black-capped Chickadees and Carolina Chickadees, also use fur in their nests.  Many backyard birders, myself included, place pets’ fur in our gardens (I use a suet feeder filled with some of my cats’ fur) for songbird nest-building.

Consider the irony of a cat’s fur serving as a nursery bed for a baby bird!

Only use animal fur though; never, ever put out human hair or yarn for birds’ nest-building.  The hair and yarn can wrap around birds’ legs, tangling the afflicted in trees or shrubbery.  Yarn and human hair have are also blamed for causing accidental amputation of birds’ legs, with obviously poor outcomes for the victims.

The adult titmice and their offspring are year-round residents and in the coming weeks and months, I’ll see the parents and juveniles engage in how-to-be-a-titmouse lessons.  By autumn, the babies will be grown and off on their own, searching for a mate to usher in the next generation.

Black-crested, Tufted, or hybrid, I’m glad these darling birds are around.  Their morning songs are often the first thing I hear upon waking and their beauty graces my garden. 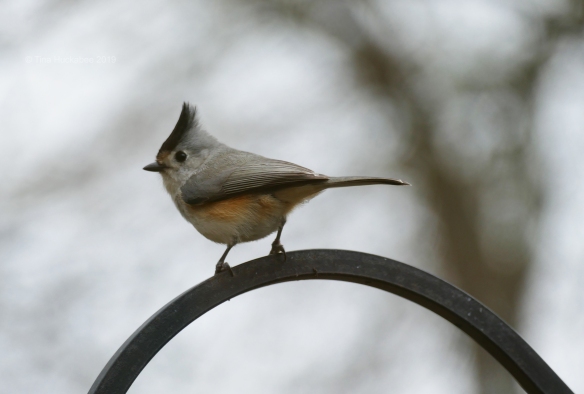