In my recent post, Dummy, I wrote about an intrepid pair of Black-crested Titmouse,  Baeolophus atricristatus, building a nest in a hanging bird house that Bee/Bird Daddy built some time ago.  It was the first avian interest shown in this house, and I was tickled that Titmice chose this bit of bird real estate.  Some of the cutest birds around, Black-crested Titmice are frequent visitors to my birdbaths and black-oiled sunflower feeders, and are year-round resident songbirds in Central Texas.  Over the course a few days, I enjoyed observing their nesting preparations, as I’ve never been privileged to see those activities up-close.

Throughout nest-building project, I noticed House Sparrows, Passer domesticus,    harassing the Titmice at every turn. House Sparrows are invasive birds, ubiquitous in urban areas.  I’ve mostly tolerated them, not necessarily considering them particularly destructive, and enjoying their chatter–and there’s plenty to be had of that!  They are piggy at the feeders, but they never appeared to displace other birds.  I’ve read that they bully and even kill native songbirds, but never witnessed those heinous acts.  But since the Titmice began prepping the house for their own offspring, I’ve observed intimately the House Sparrows’  nasty behavior toward another bird species. While no direct songbird murder occurred (that I saw), the Sparrows certainly impeded the Titmice family planning.

When at home, I’d chase the Sparrows off–yelling at them as I bolted out the front door.  (My neighbors are accustomed to my, er, eccentricities in that way).  While the Titmice continued bringing bits of nesting material to the house, singing and calling at one another as they worked, the House Sparrows proved persistent oppressors.

My concern about the Sparrow activities increased as I observed their determination to tyrannize the Titmice.  I researched about various methods of discouraging them from successfully driving off native songbirds, especially during nesting season.  One of the articles discussed affixing monofilament or fishing line around the bird house, because House Sparrows are inexplicably spooked by the fishing line, though it apparently doesn’t stop native birds from building.  I also removed the rain chain, hanging directly in front of the house, so that the Sparrows couldn’t perch on it as they were bullying the titmice. 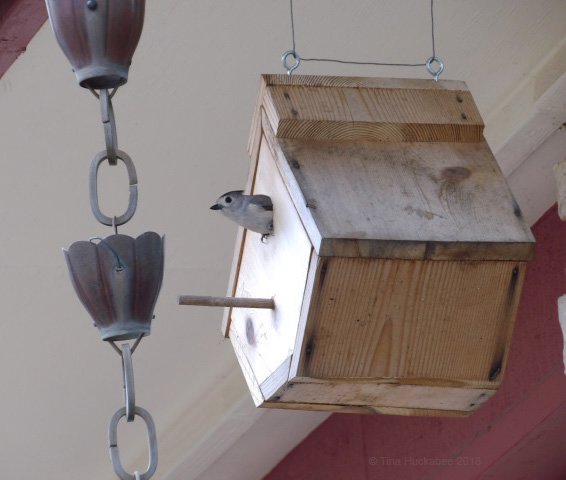 My focus was to photograph the Titmice, but the House Sparrows would perch on the rain chain and the house perch.

Alas, all measures were too little, too late, and too lame.  I realized last weekend that the Titmice were no longer working at the house.  As well, the Sparrows were scarce–they’d intimidated the titmice successfully and after rendering their competition moot, they moved on.

After a few days of quiet at the bird house, I wanted to see exactly what the Titmice had used to build their nest, so opened up the bird house and discovered that they’d made far more progress than I’d realized. 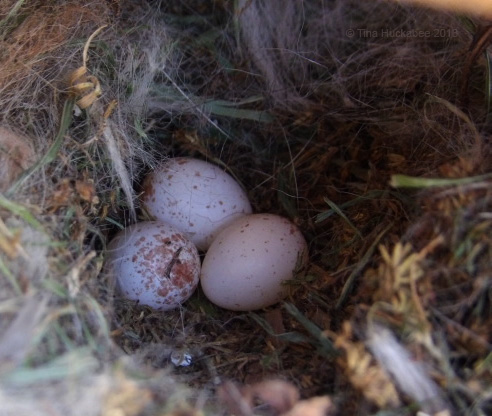 Pretty, speckled eggs. Each egg was about one-half inch in diameter.

Sniff.  Three lonesome little eggs that will never become charming Titmice chicks. True to the literature on Titmice nesting, the nest was full of animal fur, soft pollen, and bits of cut grass.

Lots of fur in this nest. I recognized the coloring common to Virginia opossums.

I’ve learned some things with this experience.  Next spring, early in the season, I’ll remove the rain chain and will also re-string the fishing line around the nest box.  I’m also planning to saw off the house perch.  It’ll limit the Titmice from landing, but as I observed  the Titmice entering the house, they mostly flew directly to the entrance, without a perch-stop.  However, the House Sparrows perched on the perch, blocking the Titmice from entering the house.

I hear Titmice song everyday–though not in my garden–especially in early morning and near sundown,  so I hope they found a safer spot to raise their babies.  There are significantly more House Sparrows than Black-crested Titmice in my neighborhood and I imagine there’s fierce competition for nesting spots.

I’m sure I’ll see Titmice, but I’ll have to wait until next year for any possibility of hosting a family of these darlings.

19 thoughts on “Not Such a Dummy After All”