We recently realized that our pond was leaking–not too much, just enough.  The pond leak isn’t a first, it’s happened before.  The most likely place for a pond to spring a leak is at, near, or around the waterfall, so unplugging the pump and dismantling the rocks which make up the waterfall are steps one and two for diagnosing a disappearing water act.

A slight slippage of pond liner, coupled with inappropriate rock placement, allowed for some (well, more than some) water diversion into the bordering soil and away from the pond.  We repaired the liner, re-stacked the rocks, and the pond is back in action and holding a constant level of water.  The fish are happy and swimming, the pond flowers are lovely and blooming, and the pond is no longer wasting water. After we turned off the pump and removed the rock around the waterfall to watch for  water level change, I observed this Blue Jay, Cyanocitta cristata, hopping around the disassembled rocks, pulling up bits of moss from those that had been in water. 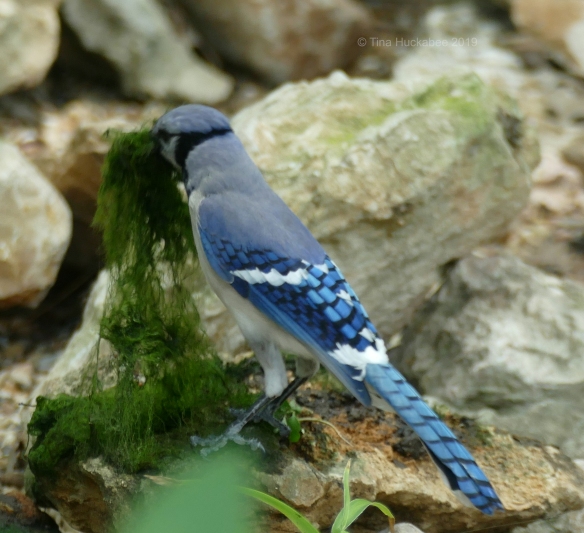 That the jay was interested in the moss is a curiosity.  Blue Jays are omnivores and eat a variety of things:  seeds, nuts, grains, insects are all on their favorite foods list, but they sometimes steal nestling birds and dine on small animals (mammals and invertebrates).  As well, they’re known to occasionally scavenge dead birds and animals.  I don’t know that Blue Jays like salads, but this jay wasn’t eating the moss, nor can I find information that Blue Jays partake of this particular green in their diets. 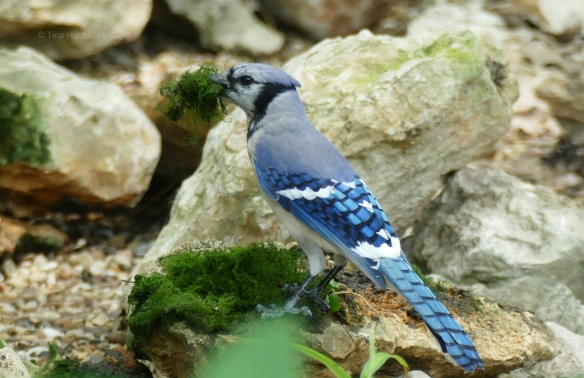 Blue Jays do use grass for nesting, though;  might they also use moss?  Males are typically the gatherers of nesting material, while females are the builders of the nests.  Could the jay be in the process of gathering nesting material?  Yes, that’s certainly a possibility, though it seems a bit late in the season for family planning and house building.  Blue Jays only produce one brood per year and when I’ve observed Blue Jays and their nests, the babies fledge in May, or early June at the latest.  That said, Jays will abandon nests if a predator attacks or if some other calamity befalls the eggs or nestlings.  This spring has seen some spectacular thunderstorms with high winds and driving rains, perfect for dislodging nests–and nestlings–from trees.  Additionally, owls and hawks live and hunt in our neighborhood, so it’s reasonable to think that this bird’s first brood didn’t fledge successfully and he and his partner are in the family way again. 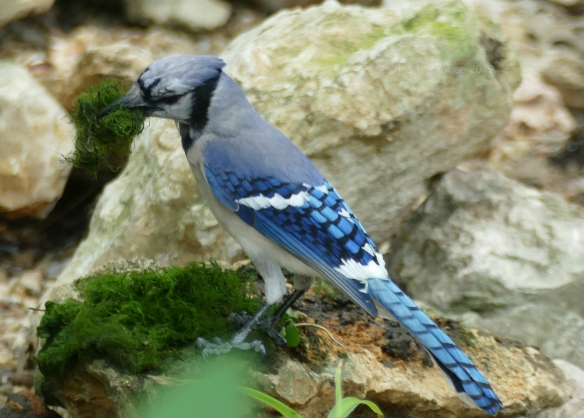 Mr. Jay was choosy about his moss.   He plucked moss from a rock, then dropped some of it. He bounded around to other moss rocks, snagging more in his beak, dropping that, then gathering other bits.  He acted as if he was looking for just the right sort of moss.

After a time and done with the moss-work, he flew away.

My best guess is that he was helping his mate build a nest–maybe their first, probably their second. There are no occupied Blue Jay homes in my trees, so I’ll never know for certain if the plucked moss is destined to feather a nest.  Maybe in a month or two I’ll see a fledgling Blue Jay, nearly as big as her parents, ruffling her feathers, squawking impatiently, and begging for food.

How is your wildlife?  Are they foraging in your foliage or feasting at your feeders?  Are the wild things in your garden chasing competitors, wooing mates, or raising families?  Please share your wildlife garden stories and remember to leave a link when you comment here–happy wildlife gardening!