Tis the season to owl watch and at least one owl is providing a bit of show.  I’ve heard occasional territorial trilling and have seen an Eastern Screech Owl, Megascops asio, in our nest box on and off for a few weeks now.  At this writing, it’s been about 6 days since Mr. Screech snoozed during the day in Tina’s Owl Chateau, but owls are like that: they show up, hang out, disappear and don’t say where they’re going, and then, maybe, show up again.

Who knows what an owl thinks or how he makes plans?

This is the Screech, resting comfortably in the nest box one afternoon.   What you see is his back and tail feathers.

As well as seeing him peek out at the hole of the nest box (sorry, no photo of that as I didn’t want to spook him!) and observing his daily rests through the lens of the owl camera, I spied him in my neighbor’s tree last week.

Isn’t he cute as he glares menacingly at me?  On second glance, maybe it’s more of an annoyed stare. 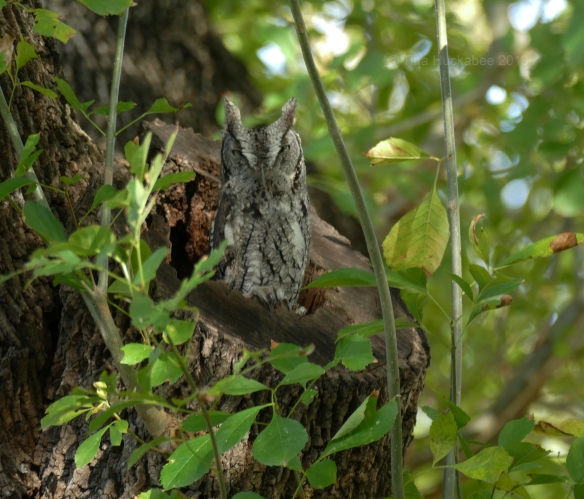 Tree holes are the traditional, preferred spot for owl nesting, though in all my years, I’ve never seen an owl in this particular hole (just feet from my front garden) and wouldn’t have observed him, except for the alarm calls of Blue Jays, Carolina Chickadees, and Lesser Goldfinches.  Our nest box, which resides in a tree in our back garden, has attracted Eastern Screech Owls for most of the past decade, with varying degrees of familial owl production.  The nest box is a human affectation for attracting the darling predators and it’s mostly proved a snugly spot for chick rearing.

I don’t know with certainty that this tree owl is the same as my nest box owl, but it’s probably the same little dude. Am I sure it’s a male?  More than likely, because it’s typically the male who checks out suitable digs as he works to attract a mate for the upcoming breeding season.

Our owl luck has lacked in the past three years, so while I’m tickled that there is at least one Eastern Screech Owl experimenting with the local real estate market, it’s no guarantee of a settling down, a mating pair, or the creating and caring for chicks.  Time will tell and wildlife gardener patience is a must.

Appreciative of the quirks of wildlife, I’m marking Wildlife Wednesday and also joining in with Anna and her Wednesday Vignette.   Check out her beautiful Flutter and Hum for musings of various sorts.