Summer wanes, but heat persists.  The days grow shorter, nights are longer; all are cooler.   Rain falls, gently, but also in sheets and deluges. Here in Central Texas, September weather conditions tend to the transitional and this past month certainly bolstered that weather paradigm. Summer 2017 is now in the history books and autumn will write its own story.  But no matter the conditions, garden wildlife continue their activities:  eating, dying, growing, defending, migrating.  Today is the first Wednesday of the month and time to appreciate those with whom we share space in the wilds of our gardens and neighborhoods.

I’ve been watching this beauty, 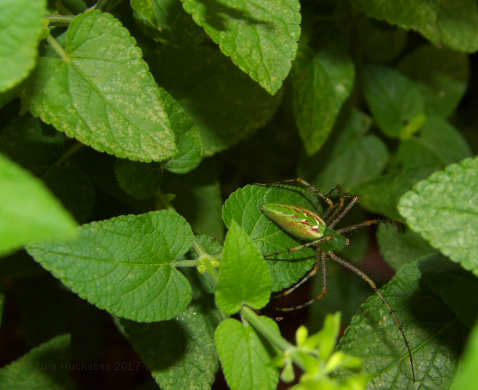 …a Green Lynx Spider, Peucetia viridans, for a couple of weeks.  She perched atop a White tropical sage, Salvia coccinea, successfully hunting various pollinators who happen her way while going about their own feeding business. She snagged a Horsefly-like Carpenter bee, Xylocopa tabaniformis, and while I angled for a photo, the startled spider dropped the bee onto a leaf below the spider’s lair. 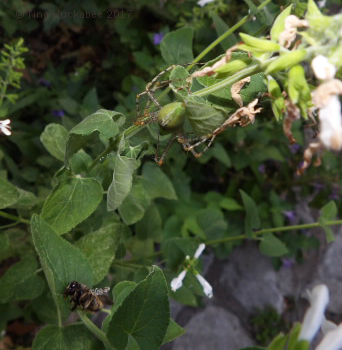 Not willing to lose out on a juicy bee, Ms. Spider makes her way along the stem to her repast. 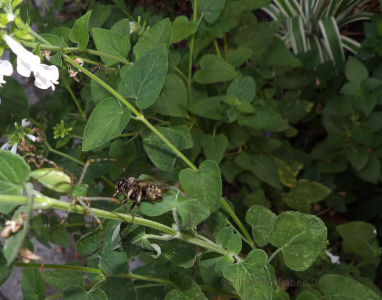 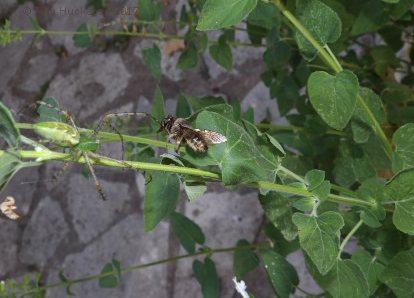 Sniff–the X. tabaniformis bees are my favorite bee species and I hate to see one of them become someone’s meal.  But everyone must eat, including garden spiders, and that’s the way of wildlife–and wildlife gardening.

This little bee, perhaps a Sweat bee, Halictus tripartitus, and another common native bee in my garden, also fell victim to the spider’s appetite and hunting skills. 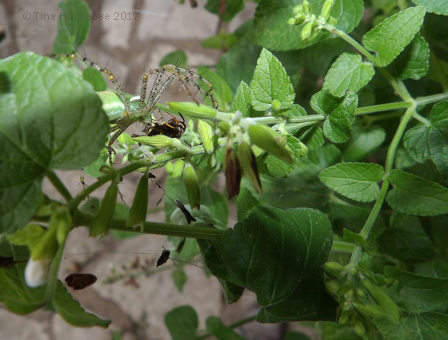 Another sniff by me.  Well, it can’t always be bad insects that are eaten.  I had words with Ms. Spider about expanding her food repertoire, but she remains on the Tropical sage, hunting and eating her fill.

On this Frostweed, Verbesina virginica, a Milkweed Assasin Bug,  Zelus longipes, demonstrates its hunting prowess. The snared snack is yet another Horsefly-like Carpenter bee.  There are lots of these bees in my garden, so it makes sense that some are going to become prey for hunters. 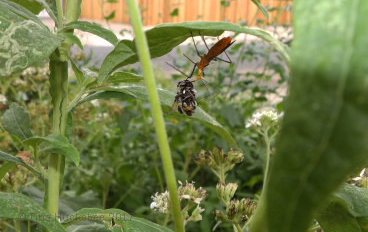 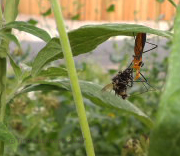 I wish I could warn the bees about the impending danger lurking amongst the flowers, but they’re on their own in the big, bad, dangerous garden-world.

Frostweed, V. virginica is the best, THE BEST,  pollinator plant in my garden.   When it blooms each autumn, I’m always amazed at the variety of insects partaking of its bounty. Each blooming season I see and learn about new-to-me pollinators by watching what visits the Frostweed flowers.

I observed this handsome critter on some Frostweed blooms: 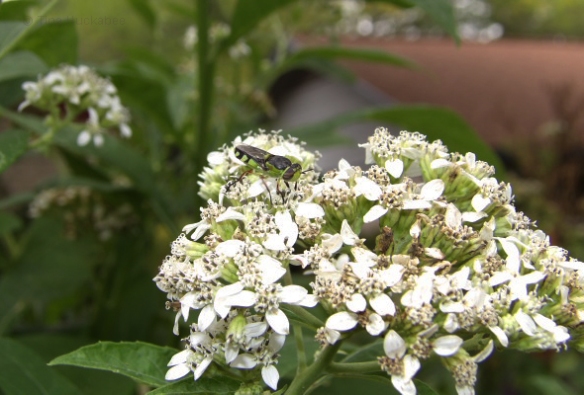 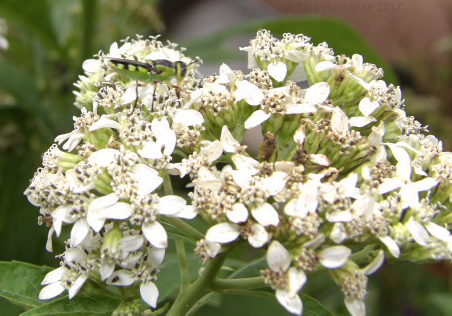 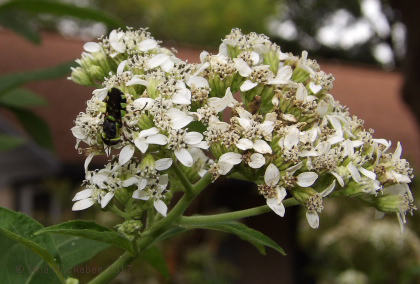 I can’t decide if its coloring is akin to the loud clothing combos of a golfer or the eye-popping garb of a disco dancer, but I’m sure glad this one came by for a sip so that I could admire its kelly green-and-black striped costume and deep maroon eyes. 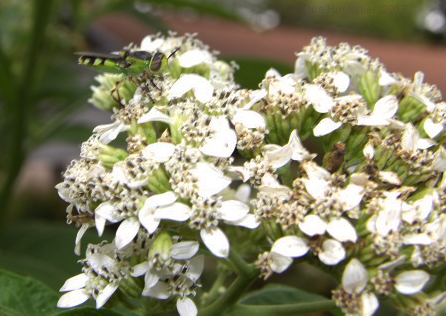 This Largus Bug, Largus succcinctus, may not be as beautiful as a butterfly or as industrious as a bee, but it dines on the Barbie-doll pink blossoms of the Coral Vine, Antigonon leptopus, pollinating with the best of them

Another stellar autumn pollinator plant, the Coral Vine is beloved by honeybees.  The vine is currently in motion with the buzzing activity of huge numbers of honeybees working these sweet blooms.

I haven’t posted recently about the resident Green Anole, Anolis carolinensis, lizards in my garden, but there are plenty of them around, eating anything smaller than themselves. 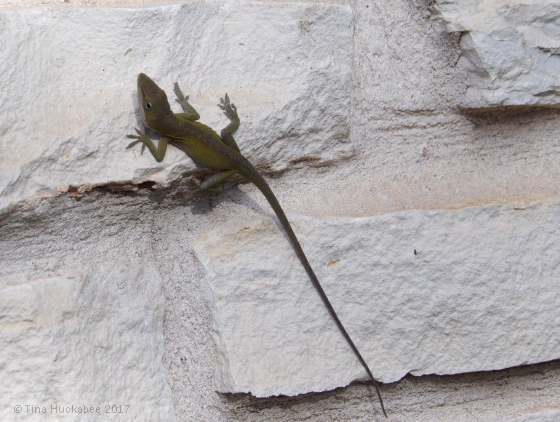 Hanging out on the front wall of the house, neither green nor brown is particularly effective camouflage.

This one was in brown-to-green transition as he looked warily at me, assuming some invasion of his territory. He has nothing to fear from me–I love these little ones and am happy they like my gardens.

This very little one is obviously a juvenile, at only about 2.5 inches in length, compared to the 6 or 7 inches for adults.  In late summer and early fall, it’s common to spot these teenage anoles.  They’re even cuter than the adults. 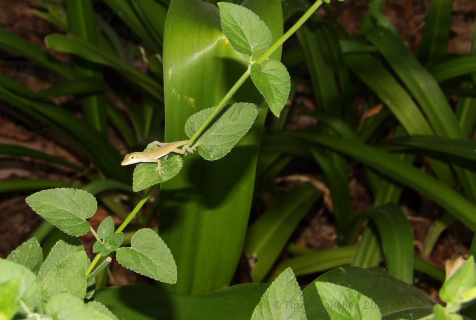 Bird migration was a big win in my garden during spring, but there has been little migratory movement through my garden this past month.  I spotted what I think was an Eastern Phoebe and another bird who was yellow with wing bars–that describes quite a few migratory birds, but that’s the extent of bird migration action. This juvenile (?) Wilson Warbler, Cardenllina pusilla, enjoyed the pond and also picked insects from the Yellow bells, Tacoma stans and the Autumn sage, Salvia greggii. 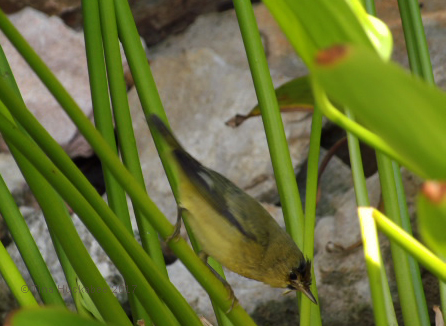 I hope the migrating song birds are simply finding more amenable conditions west or east of my garden.

Hummingbirds were a constant this summer and there are still a couple of them around, chasing one another and fueling up for migration to Mexico and Central America on their favorite nectar plants. 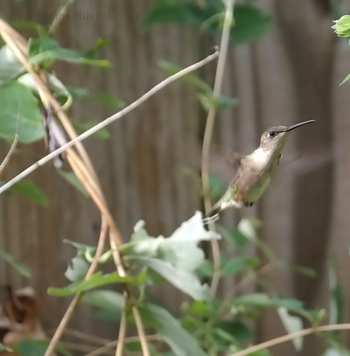 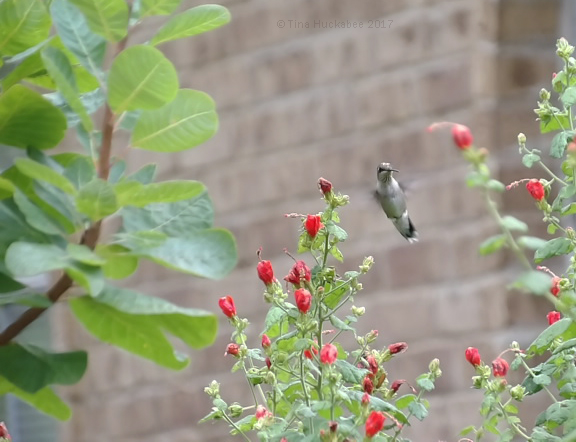 She can’t decide which Turk’s cap blooms (Malvaviscus arboreus) to feed from.

Female Black-chinned Hummingbirds, Archilochus alexandri are the most common hummers that I see.   I’ll miss their zooming antics, territorial squabbles, and annoyed, bossy chirps when they finally decide it’s time head south–which will be any day now.

Transitioning from summer to autumn provides interesting viewing of common and uncommon critters, while enjoying more pleasant temperatures.  I hope your garden is full of wildlife happenings and ready for autumn color. Please share your wildlife stories for this past month and remember to leave your link when you comment.  Good wildlife gardening to you!