Welcome to Wildlife Wednesday for December where all things feathered, scaled, and furred are appreciated and lauded for their contributions to a healthy environment and simply for being.  Bees, butterflies, and birds are still active in the mid part of autumn and are visiting and/or residing in my gardens. Gardens are richest when they reflect the natural world in complexity and diversity of plant and wildlife.  A wildlife garden is a refuge for insects and animals by providing ample food, water, and protection for critters and it’s also a challenging and educational endeavor for gardeners.

Additionally, wildlife are tricky to photograph, or at the very least, not always in cooperation with the photographer’s goal.  I was attempting a pollinating shot of this Horsefly-like Carpenter bee,

…but the bee was too fast for me and my camera.  However, I’m pleased at the shot of her in flight between the blooms of white Tropical Sage, Salvia coccinea.

I spied this gorgeous caterpillar on  a single fallen Shumard Oak leaf. 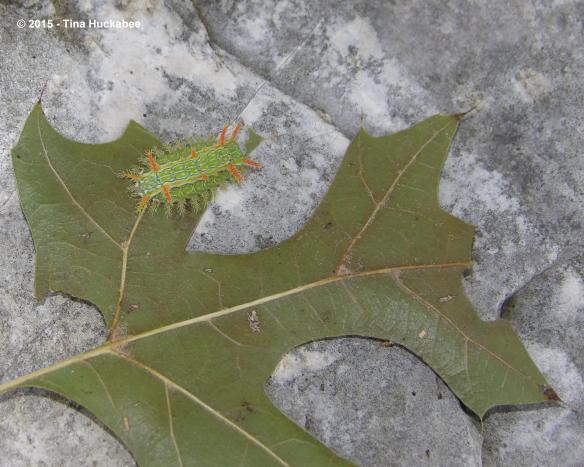 A  Spiny Oak Slug Moth, Euclea delphinii, I knew better than to touch this caterpillar because it can deliver a wallop of a sting–birds and gardeners alike are forewarned by coloration and spikes.  I placed the leaf up on a branch, entwining it with another leaf,

…in the hopes that the moth larva would continue its eating in preparation for pupating to its adult form.  When I checked later, the moth caterpillar was off to other munching territory.  Happy trails to you, buddy!!

A Giant Swallowtail, Papilio cresphontes,  visited and pollinated before the weather turned wet and chilly,

A year-round resident of Central Texas is the Queen, Danaus gilippus, who is a relative of the migratory Monarch Butterfly, Danaus plexippus,  and is nectaring on Gregg’s Mistflower, a favorite nectar plant of this species. 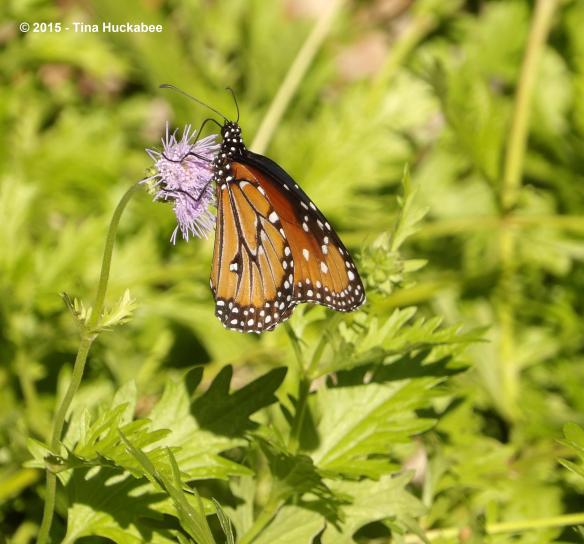 Here, a male Queen rests and poses on the same Gregg’s Mistlfower plant.

I see a few Queens on warmer days, though lately, Queens and warmer days are fewer in number.

Early one morning, this  Northern Mockingbird, Mimus polyglottos,  landed near to where I was working and hung out, practically begging me to take some photos.  I obliged: 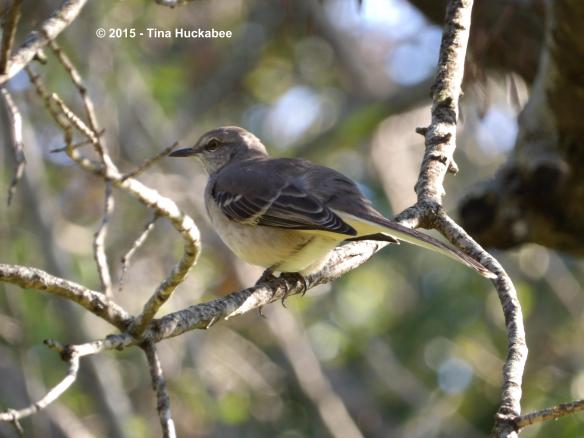 The belly on this beauty is a very light yellow, but often Mockingbirds sport grey bellies. The color differences aren’t entirely gender related, but judging from photos in my various bird books, might be age related.  I think this might be a first year female.

I was tickled at the success of this photo of a  Carolina Wren, Thryothorus ludovicianus.

These little birds are common in my garden, often announced by their lovely (and loud!) songs, but are quick-moving and hard (for me!)  to photograph.  They flit among the under-story shrubs and low branches at the back of my beds, looking for spiders and a variety of insects, but I do see them at the bird feeders, snatching sunflower seeds along with other birds.

Lesser Goldfinches, Spinus psaltria,  are a favorite bird species of mine.  They love, REALLY LOVE seeds of aster plants.  In the summer, they visit my large Sunflowers and Purple Coneflowers and in the fall and winter, the seeds of the Goldeneye. 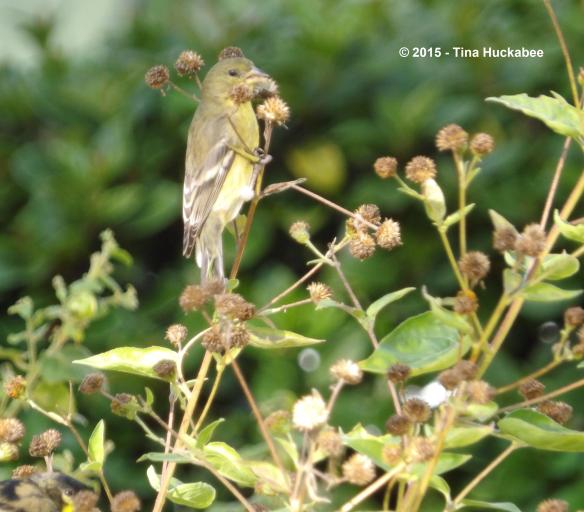 There are still some flowers blooming and those will seed out in the next month or so.  I should enjoy observing the Goldfinches, on and off, through much of winter.  More importantly, they’ll have a food source readily available in my gardens for a long time.

There are two Carolina Chickadee, Poecile carolinensis,  pairs who regularly visit my feeder. 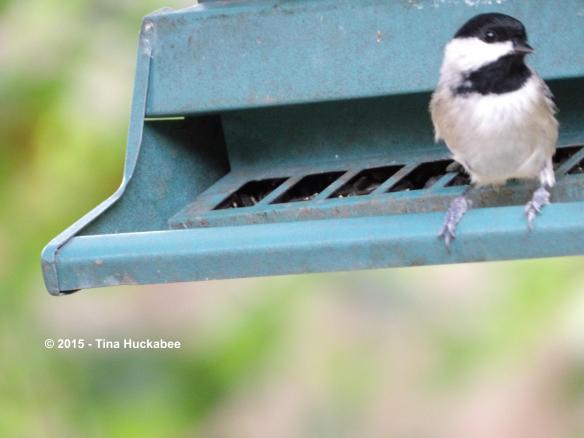 Like the Carolina Wren, the Carolina Chickadee enjoy spiders and insects, but also eat seeds and visit backyard bird feeders.  “My” couples feed in tandem with a pair of Black Crested Titmice, who have been very shy with me this month, thus no photos of either Titmouse.

Finally, there was this Northern Cardinal, Cardinalis cardinalis.

I watched this guy for about a week, mostly seeing him in the brambly part of my back garden.  I would also see him plopped on the ground, in a rather lazy dove-like position, munching away on sunflower seeds which the Blue Jays and squirrels messily and generously  knocked out of the feeder.

I didn’t, however, see him fly.  He’d flit, low to the ground, and waddled along if I made a move toward him.  I noticed that he didn’t have tail feathers, 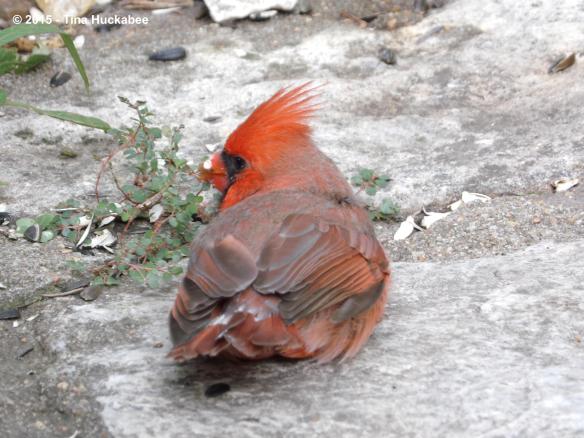 …but his wings appeared to work normally, not as if he had a broken wing.  He never gained height in flight, but fluttered through the garden, and when landing, he’d tumble, as if he couldn’t quite land on his claws. I’ve wondered if he’s the mottled juvenile Cardinal that I wrote about in September’s Wildlife Wednesday, but I have no idea.

This past week, as the weather was turning wet with potential flooding (that didn’t happen) and cold (which did), I decided to intervene and catch this odd little bird, rather than have one of the neighborhood cats or perhaps a nighttime rat or raccoon do him in.  I was able to catch him very easily, which isn’t a good sign.  If I  can catch a bird with little effort, how easy would it be for a predator to catch him? 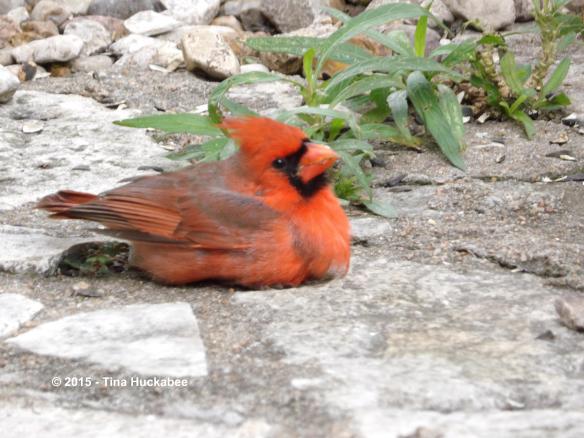 Had it been a normal week, I would have taken him to Austin Wildlife Rescue, but the Great Cardinal Catch was the day before Thanksgiving.  I’ve volunteered at Wildlife Rescue in the past and though I didn’t often work with birds, I know the basics of provisions:  gentle handling while wearing gloves, a quiet, protected spot for the bird to rest, water and food.   Ironically, my best cage is my cats’ carrier–but I don’t mention that to the birds that I’ve rescued.   Nor do I mention the trapped and vulnerable birds to my cats.

The Cardinal seem to do well for the first 24 hours–from Wednesday through Thanksgiving Day. He ate and I thought that I would take him in to Wildlife Rescue on Friday, or perhaps, if he improved, release him.  Alas, he was dead by Friday afternoon. I’m not quite sure what was wrong with him, but he wasn’t a normal looking or acting Cardinal from the first.  Post-mortem, I looked over his body and didn’t see any obvious signs of injury and I’m sure of his wings were in good shape.  That he couldn’t fly well or land properly and that he didn’t have tail feathers, which makes me think that he was askew in his development or may have had an injury that wasn’t obvious.

Should I have nabbed him and placed him in the cage?  I don’t know.  I am sorry for his death, but I don’t think he would have survived in my garden in the cold and wet weather and it’s probable that even the dedicated staff at Wildlife Rescue couldn’t have helped him.

This is a sad note to end on for this month, but a realistic one.  There are many factors that impede the health and normal lifespan of wildlife; I sometimes wonder that any  survive the myriad day-to-day obstacles they face.  Northern Cardinals aren’t in any way threatened or endangered–they thrive in a wide geographic range and have adapted well to human urban development.   But that’s not true for many bird (and everything else) species.   North American bird species are in serious decline and that’s been happening for 5-6 decades.   With the advent of industrial farming and urbanization (both of which are major ingredients in climate change), as well as habitat destruction and widespread chemical use in gardens–the list of damaging factors to the natural world, unfortunately, goes on and on–insects, birds, amphibians, and mammals need our support and consideration.

We don’t want to be responsible for creating a silent spring.

If you don’t yet grow for wildlife, why not give it a whirl?  It’s easy:  plant natives and non-invasive, non-native perennials which provide nectar, pollen, seeds, fruits, and cover.  Get rid of some (or all!) of your sterile lawn–there’s nothing in a typical mono-culture lawn that feeds wildlife.  Plant large native shade trees, under-story shrubs and small trees, perennials (evergreen and herbaceous), and ground-cover. Avoid using any poisons for insects (or any other critters, for that matter) because most insects are, in fact, beneficial.  They pollinate, feed on other insects which can damage plants, and comprise a major food source for all species of animals.  Most insects live and feed on native plants (remember my Spiny Oak Moth Slug from earlier in this post?) and rarely, if ever, “kill” a host plant–insects and host plants usually engage in beneficial symbiotic relationships. If the balance of the food chain is maintained, everyone wins:  critters, people, and the environment!

Make water available for your wildlife visitors; it is the stuff of life.

If you provide these things, no matter where you live, wildlife of all sorts will settle in your garden.  You will learn about your garden residents and visitors and also help repair the world, just a little and in your own plot of the Earth, by assisting those who cannot speak for themselves.

Did you have wildlife visit your garden this past month? Please post for December Wildlife Wednesday–share the rare or mundane, funny or fascinating, beneficial or harmful critters you encounter. When you comment on my post, please remember to leave a link to your Wildlife Wednesday post so readers can enjoy a variety of garden wildlife observations.