In the garden, if no where else, this spring has been normal:  irises, columbines, and poppies set forth their early blooms exactly on time.  As the days lengthened and temperatures warmed, coneflowers, salvia species, and sunflowers flowered-up, right on cue.  Bees, butterflies, and birds are out-and-about doing their things: mating, nesting, seed-eating and pollinating.

What has been weird and also wonderful (or mostly so) are appearances by a variety of reptiles that I rarely, if ever, see in my garden.  I’ve enjoyed a quick look from a Texas Spiny Lizard, never before seen in my garden, and visits by two different Texas Rat Snakes, a large adult and a small young one.  It’s not odd to see one rat snake from time-to-time, but several look-sees within a couple of weeks is a special treat.

My most recent reptile encounter was with this critter, a Common Snapping Turtle. 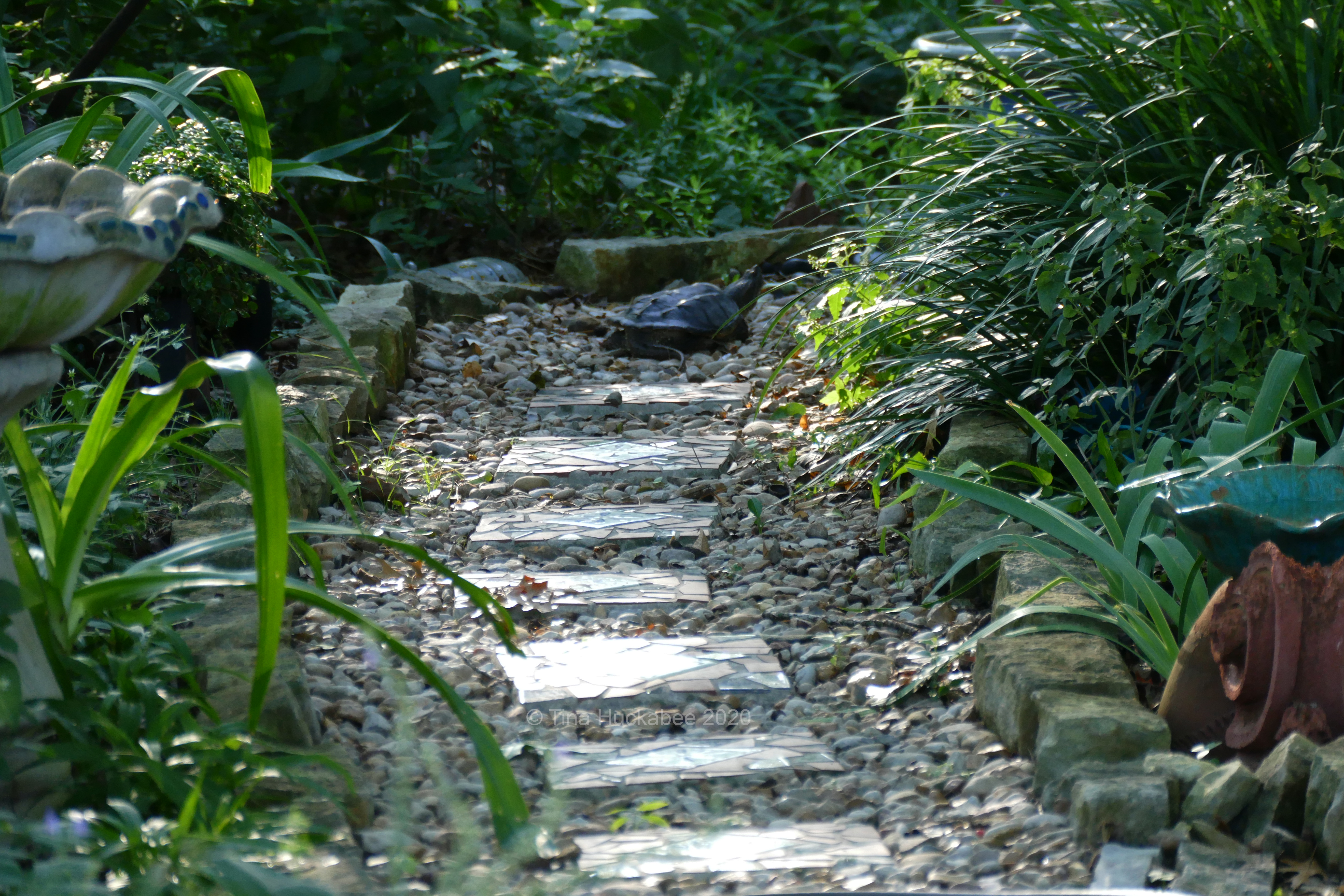 I was gazing out a window early one the morning, trying to recall what day it was, coffee cup in hand, when I saw plants waving in the wind at the border of a path.  From the greenery emerged a turtle, bumbling onto the pathway.  By the time I approached the turtle, it had stopped its lumbering, no doubt because it sensed a larger predator nearby.   I’m confident this is a Common Snapping Turtle, Chelydra serpentina, because its geographic range is wide and includes Austin.  Another turtle species, the Alligator Snapping Turtle, Macrochelys temminckii,  is threatened, living in a limited range, primarily in East Texas.   Also, Common Snapping Turtles, while spending time in water, are also found in brush, whereas Alligator Snapping Turtles are mostly aquatic creatures, on the ground less often.

I think this turtle is relatively young, as snapping turtles can grow quite large

I like this shot:  live snapping turtle headed one way on the path, ceramic armadillo (with accompanying ceramic babies) headed in the opposite direction.

Astrud the Cat was enjoying her morning garden stroll and padded over for a look. 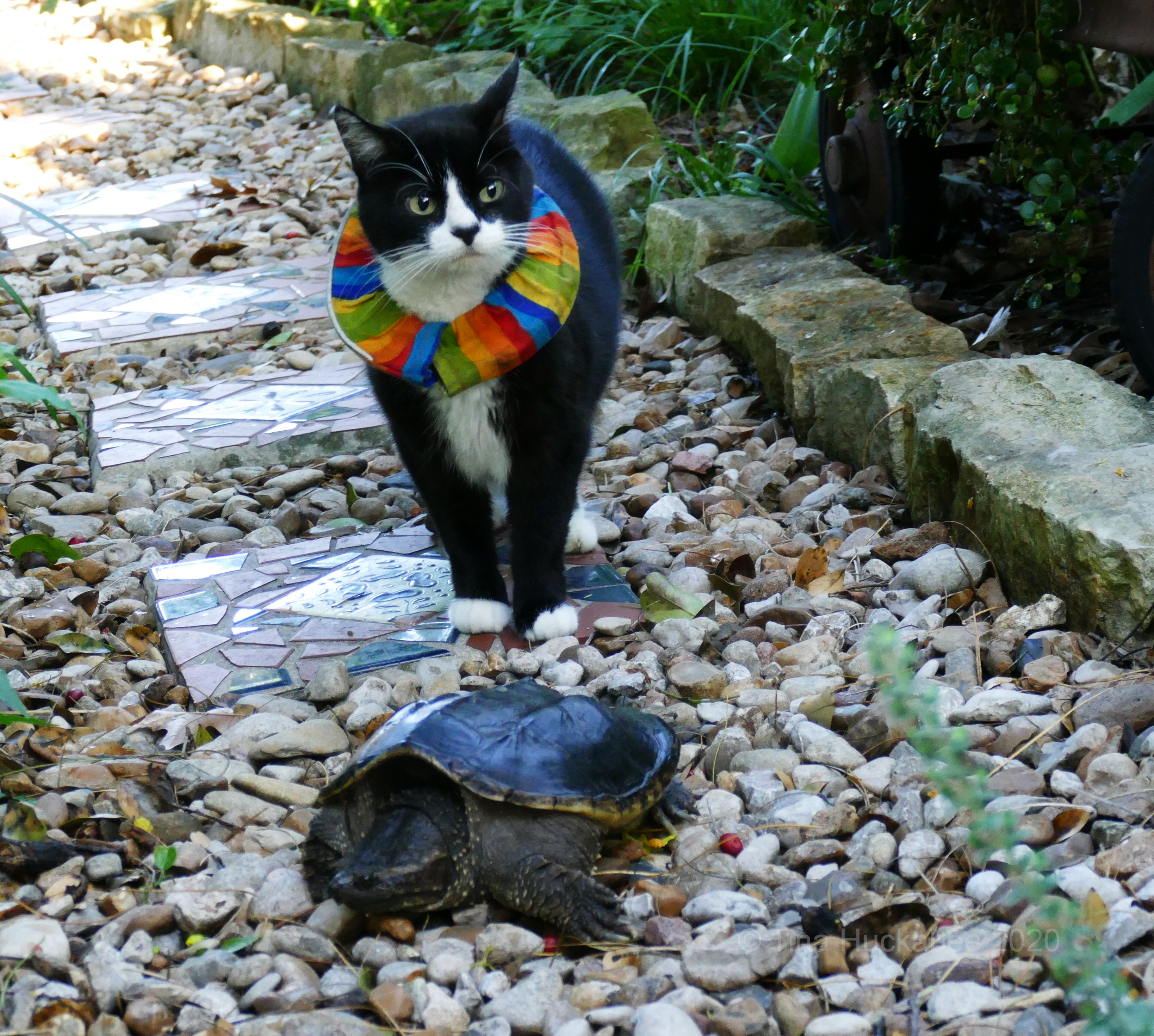 She wasn’t quite sure what to make of this new garden creature.

Whatever this thing is, I’m going around it–who knows what it’s up to?!

Well, the turtle had been up to something and that became clear over the next day or so.  My pond normally looks like this in May.

This photo was taken a year or two ago, but the pond plants are all the same.

After spring pruning and lily re-potting, the lilies send up stems topped by new foliage–lily pads.  The foliage spreads out, covering much of the pond’s surface.  The foliage protects the fish from the hunting eyes of predators and also helps maintain the average temperature of the water during the upcoming hot months.

The day of the turtle sighting, I noticed that all the lily pads were arranged in a half-moon shape around the edges of the pond, the pads all bunched up, with no social distancing. Had something disturbed their normal pattern? The water was also murkier than normal.  Raccoons have sometime mucked around in the water, though no real damaged has ever resulted, other than terrifying the poor little fish.  I didn’t think much about either bit of evidence until the next morning, when I observed that of the lily pads remaining, most were upended.  The pads had clearly been chopped off from the base of the plants.

This pad found itself in the bog area, face down, stem up: 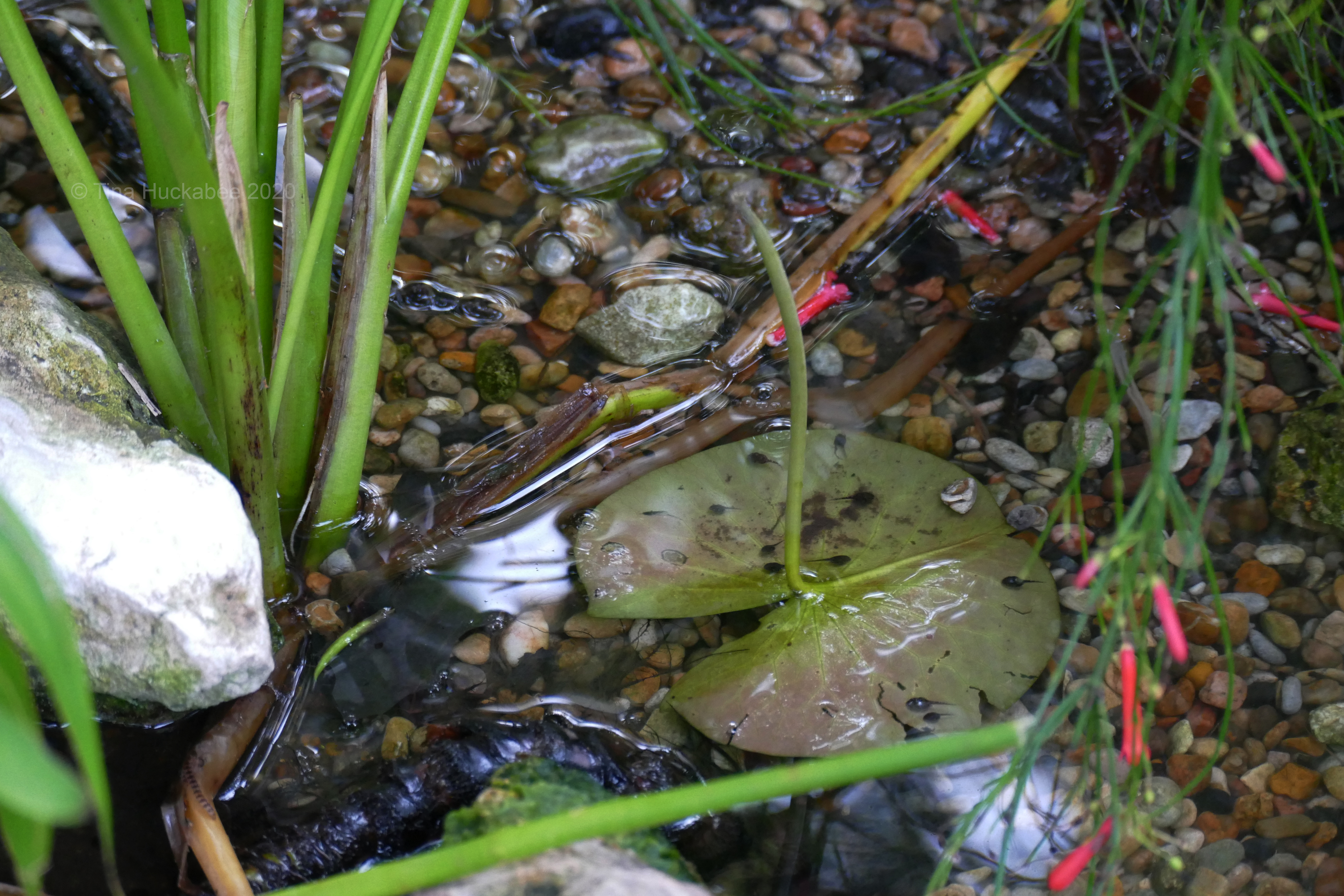 Look at the the lily closely. Do you see the tadpoles swimming in the water covering the bottom of the lily? Toads of the future!

Other lily pads were free-floating on the pond’s surface, untethered from their roots.   I fished out the wayward pads and tossed their decapitated heads into the compost bin.

I lugged the lily plants to the surface and they were definitely eaten down, practically to their base.  Someone had a lily stem late-night lunch.  Or dinner.  Or breakfast.

Common Snapping Turtles eat just about anything, including plant matter–and so he/she apparently dined in my pond!   I didn’t notice any goldfish missing, but it would be hard to tell if the turtle ate any of the gambusia (mosquito fish), as they’re small and  too numerous to count.  The turtle definitely ate greens and its meal might have included a side of protein.

Since the turtle-led lily decimation, the pond’s water has been cloudier than is typical, in part because the lilies, along with the bog plant, Pickerel Weed, help filter the water, keeping it clear.  Interestingly, the turtle didn’t bother the stems of the Pickerel Weed, which is a bog plant;  they remain intact and unmolested.

The not-so-wonderful part of a snapping turtle in the garden is that the pond is lacking in lilies, it is nearly lily-less, and has resigned its moniker as lily pond–for now. 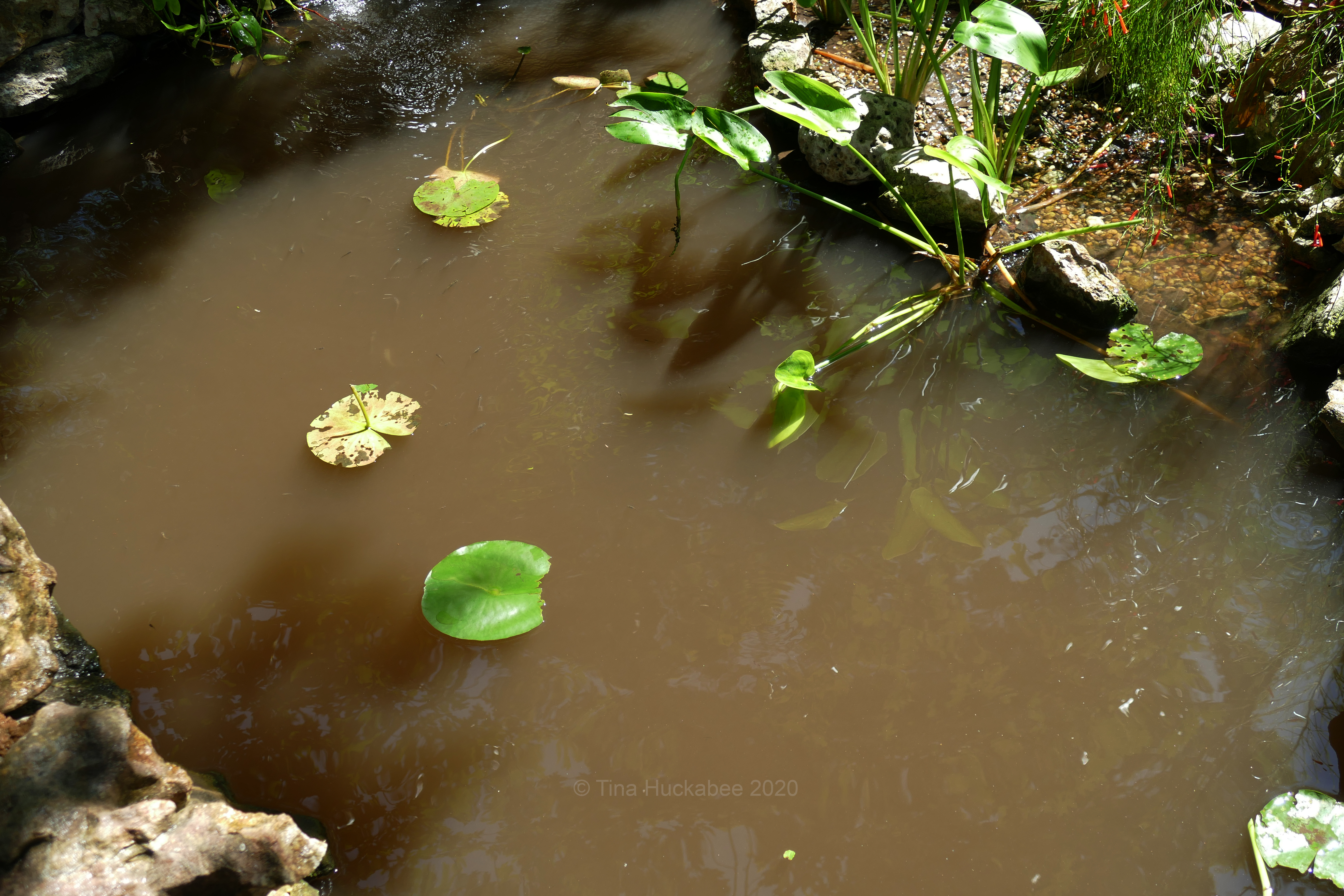 The lily plants should recover and probably quickly;  I’ve already spotted some new stems, stretching upwards, making their way to the surface.

Will the turtle come back for more pond salad?  I would prefer it move elsewhere, but my garden is open to wildlife.  Sometimes, toleration of wildlife wildness is part of a wildlife gardener’s commitment to critter survival.

For more information about snapping turtles, check out this short, educational video illustrating the differences between the Alligator and Common Snapping Turtles.  Watch your fingers!

We live in wild times, that’s for certain.  But the good kind of wild occurs in the garden, with the occasional munched plant(s) served up as sacrifices.  I hope your garden hosts both captivating critters and pleasing plants.  As well as being Wildlife Wednesday, I’m also joining with Anna and Wednesday Vignette.  Please post about your wild garden happenings and then pop over to Flutter and Hum for vignettes, garden and otherwise.  Happy wildlife gardening!