I watched the Downy Woodpecker, Dryobates pubescens, for several minutes.   She was rock-still:  nothing moved, not a feather, despite the gentle sway of the feeder and the clasped piece of peanut in her beak.  Because she was motionless–abnormal for a bird–I realized that there must be a predator nearby. 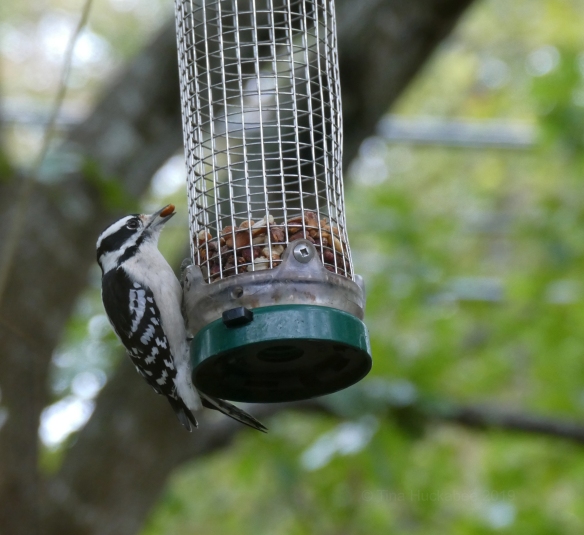 I Downy-watched from my kitchen window, my favorite bird blind.  Even with my movements at the window–slow and careful, as not to startle the little bird–she didn’t move: no head turn, no shuffle of claws, no gulp of the prized peanut, nor snatch of another.  From my standing position, no predator was obvious, so I squatted at the window, looking up into the oak tree just beyond and around at the outdoors as best I could see.

I finally spotted that which froze, in fear, the heart of the would-be feeding woodpecker. The culprit perched far across my property, high in the neighbors’ elm tree.

The photo is poor, taken through the window and at some distance, with plenty of foliage and limbs as distractions.  The hawk is a big one, probably a Cooper’s Hawk, Accipiter cooperii, as they’re common here, especially in autumn, winter, and early spring.

The Downy was still for a good five minutes, maybe longer.  Finally the hawk took flight toward my house, but high above.  A split second afterwards the Downy pushed off from the feeder, heading in the same direction as the hawk, though much farther below and toward the protection of a large evergreen shrub.

I don’t know if the hawk swooped in for the woodpecker, though I doubt that’s what happened; there’s too much cover which would serve as safety for the woodpecker and too much interference for the hawk’s dive.  I imagine the hawk winged to another part of the neighborhood in search of an easier catch, one less aware of the hawk’s existence.

It was an eat or be eaten life-cycle moment.  I’m certain the woodpecker finally ate her peanut, because I’ve seen her since.  And I’m equally certain the hawk found something to eat; I’m just not sure what, when, or where.

Appreciative for the life lessons a garden bestows, I’m joining today with Anna and her Wednesday Vignette.   Check out her beautiful Flutter and Hum for musings of various sorts.