At the beginning of 2018, I wrote about the de-bugging of Buzz, our Langstroth beehive who met its end late last summer.  Buzz lost its queen in spring of 2017 (who knows what happened?) and we were never able to successfully requeen the hive (we tried, we really tried!).  The hive declined because there was no mated queen replenishing the population of workers and once the hive reached a weak enough tipping point,  it was invaded by wax moths.

I cleaned Buzz in winter and in mid-April, two weeks before we left for a trip, we rehived our beloved Buzz.

A package of honeybees await release from their traveling cage. I wonder if they’re staring at their new home?

It’s a good idea to feed newly hived honeybees for the first month or so.  The feed is a 1:1 sugar/water mixture and helps the girls establish a solid beginning in their new home.  When we feed our bees (with a new hive, during a severe drought, or at the end of winter, before much is blooming) we use boardman feeders which are placed outside the hive, on the entrance board. 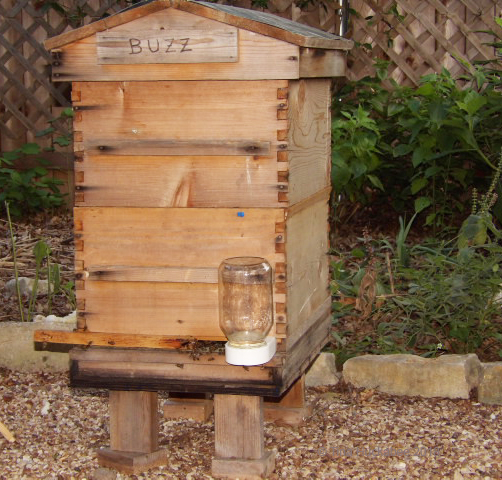 Buzz doesn’t need much sugar-water now, but I’m still supplementing a bit using a boardman feeder.  She has made such progress in comb-building, egg laying, and honey production, that we’ve recently added a second box. Go Buzz!

Our trip was couple of weeks long and we didn’t think that asking pet/house sitters to change the bees’ sugar water would be met with much enthusiasm.  It’s one thing to ask folks to care for cats and even an elderly dog, but honeybees?  The ones who sting when they’re annoyed? That’s a whole different ball of wax.

Instead, we opted to purchase an internal feeder which holds about two gallons of sugar-water.  We’ve liked the boardman feeders and they work fine when we’re around, but the internal feeder holds significantly more liquid and that’s perfect for when the beekeepers are out-of-town.

The feeder holds a deceptively large amount of fluid.  The openings are feeding tubes. 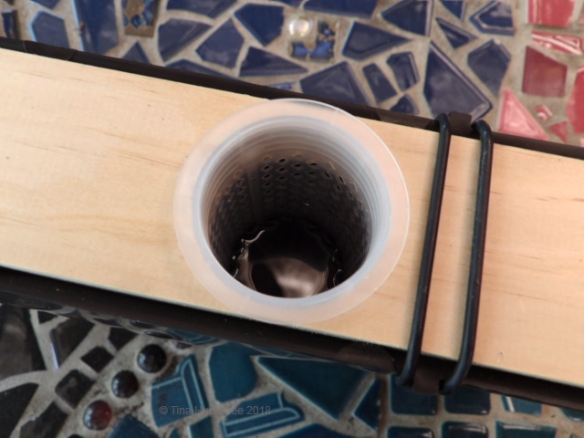 You can see the top of the sugar-water.

The feeder tubes are plastic, with tiny holes along the sides.  Bees hold on to the sides and drink, drink away.  Before we left home, our industrious bees imbibed two full rounds of sugar-water feed and I filled the box with two more gallons of the stuff the morning we left.

Once we decided that the internal feeder was the way to go while we were gone, we picked up our bees at a farm south of Austin and rehived our dear Buzz.  We had purchased new frames and hammered them together, so we slid them in the box.  Initially, we only placed four frames because we left space for the internal feeder,

…and for the box of eager, beaver honeybees. 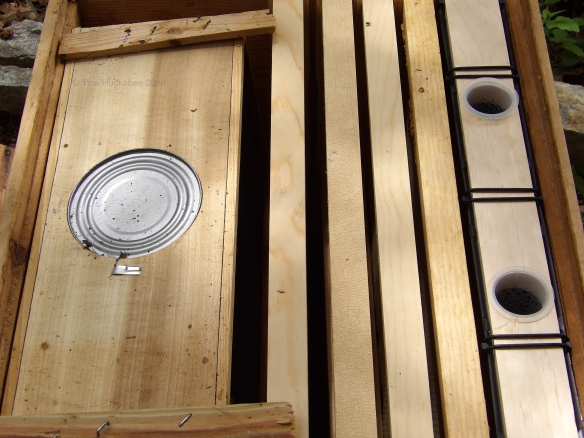 BeeWeaver Apiaries sends their packages of honeybees (one mated queen with 10,000 workers) with a can of sugar water so that the bees can eat-n-drink as they’re transported from BeeWeaver’s farms to the pickup sites, and then to their new homes–like my back garden!  I popped out the can,

…and the bees were ready for their new digs.

I dare you to stick you hand in there!  Actually, I did. I needed to manuever the queen cage out of the hole, so an ungloved hand is the best tool for that job. The girls were very nice. They don’t become cranky until they have larvae and honey to protect.

The queen cage is affixed to the top of the bee box.  The queen is sequestered in the little cage, but her workers have access to her and her pheromones. 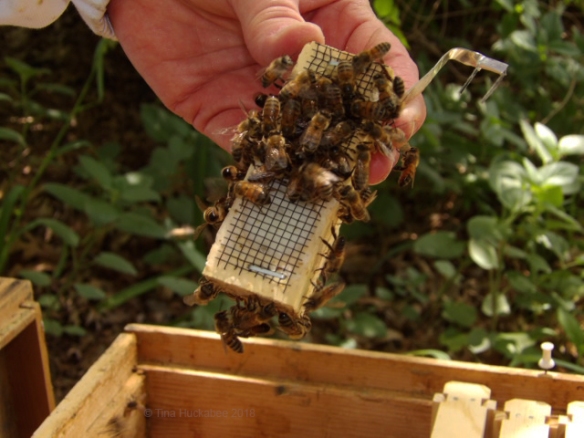 They adore their Dear Leader. 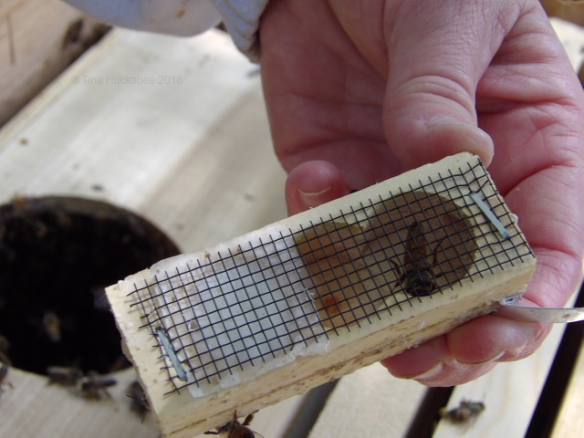 Queen honeybees have longer abdomens than worker bees. They have to store those eggs somewhere!

I hung the queen cage between two frames.  She must eat through the sugar fondant (the white end of the cage, above), in order to exit the cage, meet her subjects, and get going on her only job:  to lay eggs–and lots of ’em. 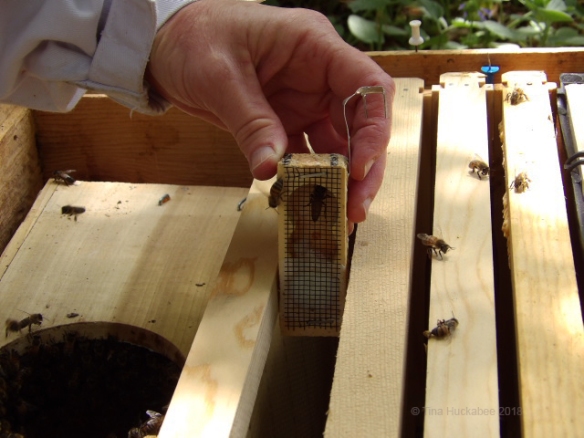 After rehiving, we covered the box and high-fived one another on the newest Buzz!  A week later we checked Buzz; the queen was out, some comb was built and the bees were off to a good start.  At that point, we removed the traveling box and added the other frames.

While doing our bee thing with Buzz, we opened Woody for a quick look-see and found that she had honeycomb, but also lots of cross-comb in her top box. 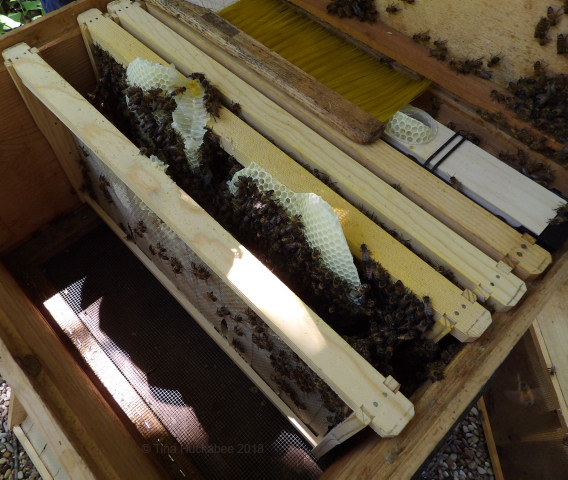 Because it’s messy and difficult to deal with, we scraped off the cross-comb.  Since then (mid-April) we’ve checked Woody and have noticed the same issue: comb placed inappropriately.  To clarify, it’s really an issue for the keeper; cross-comb is perfectly fine for the bees, they don’t care where or how they build honeycomb, they’re just driven to do so.  We’ve since figured out why they were building cross-comb, but more about that later. There’s always something new to learn–or be reminded about–with honeybees!

Their comb-building might be wonky, but the egg-laying is perfect!  Look at all these baby bees:  snuggled in their cells, just waiting to grow-up and be bees. 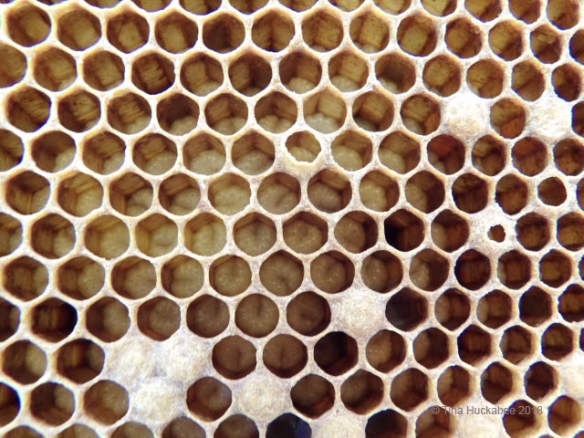 …and sip water from bird baths or ponds so that honeycomb is made and their homes are successful.