The Carolina Wrens are at it again.

The flower that the wren is singing to is a Purple Bindweed.

Singing loudly, this little one serenaded its companion, the lavender flower of a Morning glory vine.   While I could only manage one clear shot of this particular adult on the morning of the glorious concert, it was a family of four–both parents and two fledgling wrens–who were chirping and feeding in the area along a fence covered in vines.

Carolina wrens are delightful native songbirds living and breeding throughout a wide swath of the eastern and southeastern parts of the U.S.  I suspect that the wren couple currently visiting my garden are on their second brood for this year, as there were some fledglings in late spring (May) and now, two new little wrens accompany their cheery parents on their neighborhood rounds.  Wrens have never nested in my garden, but they nest nearby and visit daily.  Wrens are well-known for building nests in odd spots:  little eggs laid in hats left abandoned, then transformed into bird nurseries;  hungry chicks with mouths wide open in empty pockets of blue jeans or work shirts left hung on clotheslines; tiny birds peeping hungrily from typically quiet mailboxes, and wren babies settled in nesting material atop patio ceiling fans are examples of the quirky nesting choices made by wrens.

Busy birds who don’t stay still for long, wrens eat insects and spiders, as well as the occasional lizard and small snake.  In winter, my wrens love the commercial suet that I hang in the garden.  They hunt for food in brushy, shrubby habitats of both urban and rural habitats where they’re well-hidden by foliage. As wrens forage low to the ground, I spot them only because the limbs of shrubs and perennials wave mysteriously and when I investigate, a Carolina wren–or two–dash up and away from the foliage cover and insect buffet. This is an ideal environment for wrens because it’s full of native plants (paired with non-natives, too) which provide cover and food,  along with available water.

Wrens climb trees, snipping insects and bark lice as they go; when they forage on the ground, they sweep leaf  detritus in their search for munchable meals.  Their pointed, slightly curved beaks are ideal for grabbing insects, whether hunting on shrubs, in trees, or on the ground. 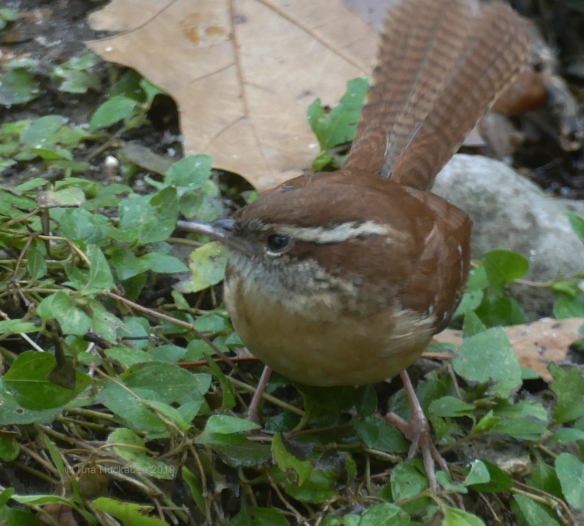 Like other wildlife, wrens benefit from brush piles because the piles are rich with diverse insect populations and provide cover for the wrens as they feed.  The vines on my back fence act similarly by providing habitat for abundant insect life and leafy protection from predators as the wrens hop from one area to another in the never ending search for their meals.

Carolina wrens are monogamous for each season and defend their territory year-round, which means that they sing all the time and I’m privileged to enjoy their beautiful songs and calls.  Carolina wrens are comfortable in my garden; we–birds and gardener–are partners sharing a healthy habitat. 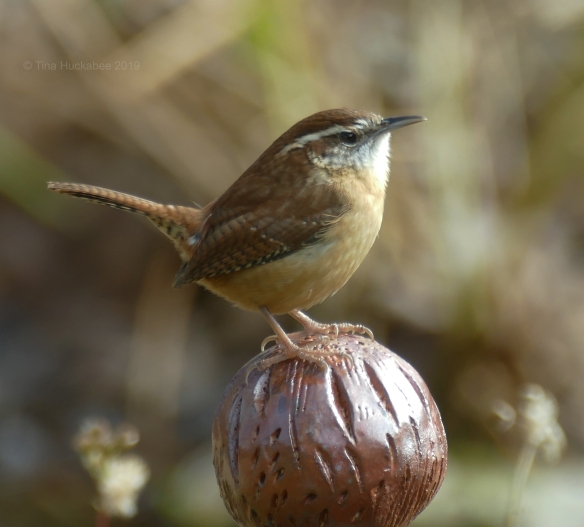