Don’t get excited, it happened four weeks ago and didn’t change much, though it was fun to watch.

Honeybee hives procreate by swarming and the swarming season lasts from spring into summer.  Swarming is the natural, normal act  of a queen leaving a hive, taking upwards to 70% of the workers with her in order to establish a new hive in a new place–that is how honeybee hives reproduce or procreate. Many people are frightened of swarms, but in fact, honeybees are at their gentlest when they swarm:  they have no home, honey, or brood to protect and are docile as they and their queen look for new real estate.  If you’ve ever seen photos of people with bee beards, those bees are swarming and are not in the least scary, they just look scary.  (Really dude? Insects–with stingers–on your head?  What are you thinking?!)

I mentioned in Sugared Bees, Anyone? that we found supercedure cells (emergency queen cells) in Buzz, so is that where the swarm came from?

I don’t think so, anyhow…

What I witnessed weeks ago was an energetic and buzzy bunch of bees vacating the hive in droves, wings vibrating and roaring, and bees filling the air.

(Please excuse the lame video.  This swarming business was totally unexpected and once we (and they) were deep in, I hastily tuned to my camera’s video recording, which I’ve never used.  As if that’s not obvious.)

Within a few minutes, the bees clamored around a limb of the Red oak tree under which Buzz resides, where they clustered together with a measure of calm and quiet for about 20 minutes.

Then, after a respite of tree-hugging, the bees were once again airborne, reversing their flight direction,

…and eventually, crawling back into the hive.

The whole event, from the first mass of bees leaving the hive, to stragglers marching back in, lasted about an hour.  It was awesome!

But was it a swarm?  The bees left the hive in swarm-like fashion, but returned to their home base.  I think that’s a honeybee hive procreation non-starter.

When honeybees swarm, it’s the “old” queen who leaves to establish a new hive. leaving a new queen and some workers, both queens-n-workers ready for honeybee action and hive building.  That’s all fine and good, but in our Buzz, the “old” queen is a queen that we purchased last June who is marked (with a white dot for 2016–yearly color markings are an industry standard), and whose wings are clipped.

So what happened?  Did she leave the hive with the worker bees and go into the tree?  Or, was it all some sort of honeybee joke?

We have some theories, but we don’t really know.

Once queen cells (the normal ones, not the supercedure ones) develop,  beekeeper wisdom is that the bees will swarm and there’s nothing that a keeper can do to prevent it.  My experience (which is limited) suggests otherwise. We’ve pulled off queen cells before and added space for the honeybees to grow and have avoided the natural process of spring hive swarming.  We attempted to do that with Buzz two weeks prior to the non-swarm swarm, but apparently, mis-timed or mis-applied our swarming-fix. So the procreation pheromones revved-up, the bees engorged on honey, and the word in the hive was GO!

What happens to a queen who can’t fly off with her workers, the ones that she messaged through her pheromone directive that it’s time to fly the coop? Maybe she waits at the front door, waving at them to come back, or perhaps, she plops off of the landing board and onto the ground, where her attendants surround her.

Lots of bees pouring out and onto the ground.

And might this be that clump?  The clump of buzziness was there for the duration of the tree-bound bees, but they crawled back into the hive with the others at the end of the adventure.

Bees clumping on the ground and near the entrance of the hive.

… and fewer still. They’re almost all back into their hive.

Imagine the bee-conversations taking place on that tree branch as the swarming workers are awaiting the arrival of their queen:

Do you bring Queen Buzz?

No!  I thought you had her!

I thought Beatrice Bee or Brittany Bee escorted her out!

Did we lose her?? Where is she?!!  Where’d she go?!!  Did one of those dreaded Summer Tanagers eat her?

Oh, man–look!  She’s still on the ground–what do we do?! No queen on the branch, what’ll we do?

BUZZZZZZZZZ!   I guess we’d better get back down there, Queen Buzz must have changed her mind.   Bummer, I was really looking forward to new digs.

And with that community decision, back into the hive they all went–presumably, with their brave, but clipped, queen.

What we know is that there was one “old” queen (who can’t leave the hive and who, for whatever reason, wasn’t  laying eggs) which is why there were supercedure cells in Buzz. What we saw when we checked a week later, was a brief glimpse of a queen–unmarked and presumably victorious over the others who would have also emerged from the supercedure cells–who disappeared down into her realm of hive frames.

Unfortunately, since that event, here as been little-to-no-new brood in Buzz. Obviously, the old queen is kaput and apparently, the new queen is not interested in fulfilling her queen gig–or she’s kaput too.  Maybe she just couldn’t find the right guy, or guys.  To save this hive, we ordered a new queen who will be delivered in early May.  I need to forewarn the new postman.

Woody hasn’t swarmed, but like Buzz, apparently had a queen who decided that egg-laying is for the birds after her initial early spring egg-laying frenzy.  Fortunately for us, BeeWeaver’s headquarters is in a neighborhood 15 minutes from my house and I was able (with a whining email to an accommodating and kindhearted apiary owner) to acquire a new queen for Woody.

With two new, strong queens, both hives should thrive–making bee babies and lots of honey.

These honeybees–they’ve produced much drama and no small amount of comedy this spring. 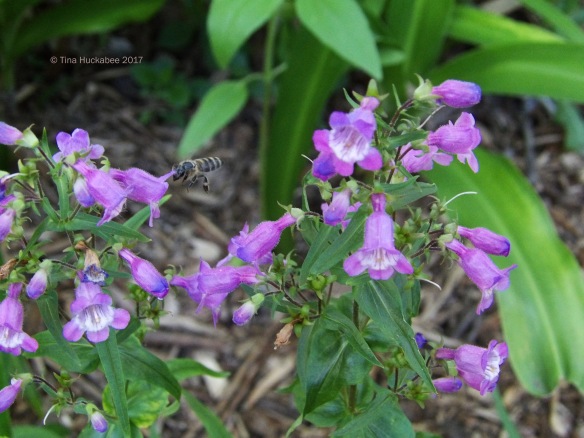 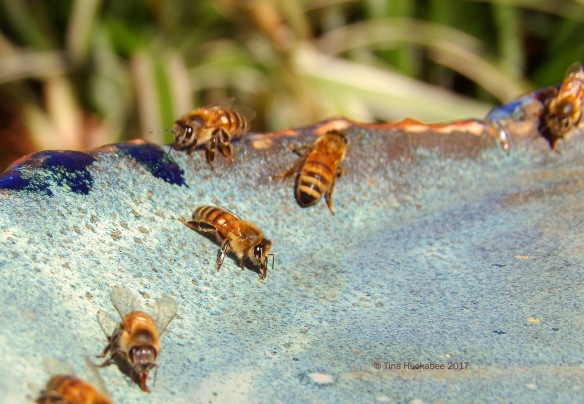 Sipping water from a birdbath.