For those in the Northern Hemisphere, spring has sprung and we’re savoring the warming, blooming results.  For those in the southern part of our little Earth, the growing season is winding down.  But for all who pay attention, wildlife is around:  living, breeding, hatching, or, fledging and becoming independent, and preparing for winter.  Welcome to Wildlife Wednesday, celebrated on the first Wednesday of each month.  We gardeners love our blooms-n-foliage, but it’s the critters who need and rely on the blooms-n-foliage that  bring life to the garden. Viva wildlife!

At the end of February, I spotted the first of the Blue orchard bees, Osmia lignaria, who’d burst out from their bee nurseries after pupating for a full year.  These deep blue, metallic bees were raring to go: ready to pollinate, mate and create new incubators for their bee babies.

Empty pupa shell. It housed the Blue Orchard bee for a full year.

Love among the blue bees!

As I write, the few adults left are adding their final touches on the eggs’ nests.  Their incubating progeny is tucked-in and safe for the coming year.

Caught in the act! One of the last adult Blue Orchards packing her nest.

There were so many bees looking for nurseries this year, that I scavenged more blocks of drilled wood and some extra cut bamboo to fill the housing needs. 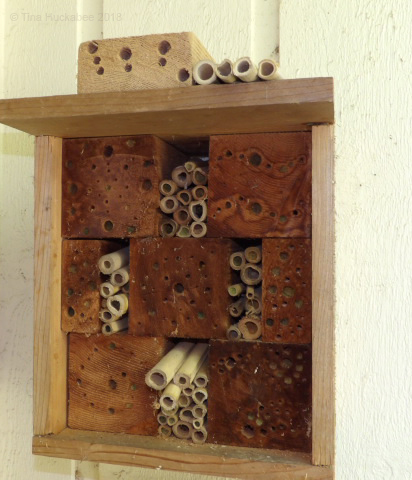 There are empty holes in this hotel, but we need to make more bee nurseries for the later season, different  bees.

I’ve placed an order with Bee Daddy for more holey wood and cut bamboo for next years’ bee babies.  So long Blue orchard bees–and thanks for your work in my garden.

Winter avian residents are eating, drinking, bathing, and squabbling in the garden.  That said, spring migration is imminent and I’ll soon say a bittersweet farewell to the feathered winter Texans that who share my garden.  The Ruby-crowned kinglet,  Regulus calendula, was a shyer fella than either of last years’ pair, but I managed glimpses of his cuteness.

I saw more American goldfinches, Spinus tristis, than I usually do in winter, though only captured a few shots of these yellow, black, and white beauties. 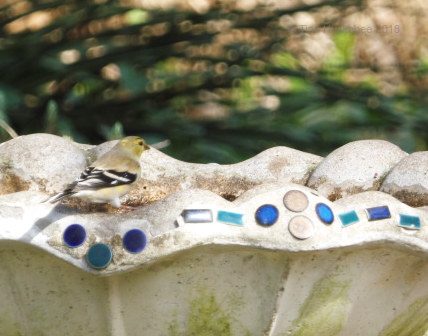 A handsome male in his not-quite-breeding plumage.

I usually see greater numbers of Lesser goldfinches, Spinus psaltria, throughout the year, but this winter, they’ve been scarce.  Still, there were a few.

Interestingly, my sister-in-law, who lives in west Austin (we’re in central Austin), experienced just the opposite:  plenty of Lessers, few Americans.  Wildlife have their preferred hangouts–much like people–critters appear in greater or fewer numbers, depending upon what’s available in food sources and cover–and whatever unknown quality they’re looking for at a particular time.

A favorite bird showed up this past month!  Cedar waxwing, Bombycilla cedrorum,  flock together on the wing and in the trees.  These gregarious birds typically perch too high (and invariably, it’s too windy) to capture good shots, but I lucked out a few times. 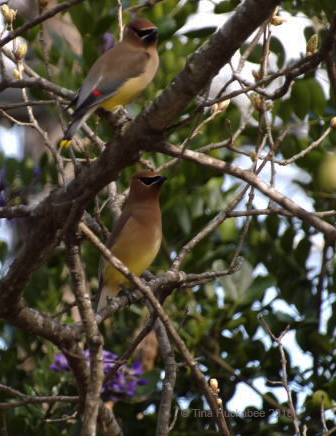 You can see the red “wax” on the tip of the wing of the upper bird. It’s not clear what this bit of bright red is for, but may be related to attracting a mate.

Rakish mask, bright yellow flare at the tip of the tale, and a splash of red–who wouldn’t find these birds attractive?

It’s rare to find them alone; they enjoy one another’s company and sometimes, the company of others.

Cedar waxwing chatting up a female House Finch.  I love the look on the finch’s face.  Whahh???

I’m still hearing them as the flock from tree top to tree top.  They’ll be around for a while, but they breed far north of here and they’ll migrate soon enough.

This is the third year that at least one Lincoln’s  Sparrow,  Melospiza lincolnii,  has visited in late winter/early spring. 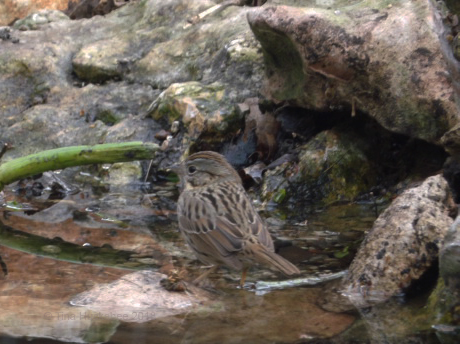 The coloring is subtle, but lovely. 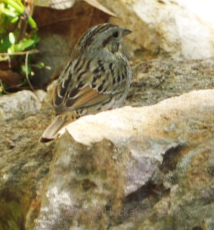 A view from behind; it’s a beautiful pattern in those feathers.

An elegant looking little bird, Lincoln’s Sparrows hop jauntily through the garden in search of seeds and flutter and flap in the bog of the pond.  There have been at least three of them at various times, though I certainly can’t tell one from another. 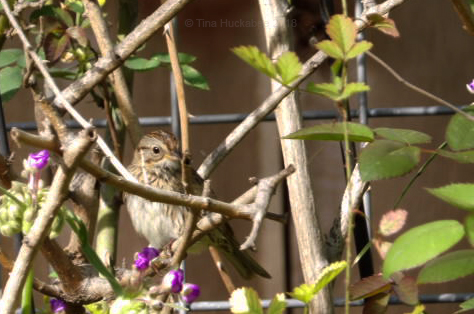 Named for a traveling companion of John James Audubon (yes, THAT Audubon), Mr. Thomas Lincoln, these charmers are in my garden briefly before they migrate.   I sure enjoy watching them hippity-hop for seeds and preen-n-shake after baths.

Another winter Texan whose appearance I anticipate is that of the Yellow-rumped warbler, Setophaga coronata.  Butter-butts (as Yellow-rumps are affectionately known) have been no-shows in my garden until recently; only in the last couple of weeks did one (actually, three) appear.  I’m happy to welcome them–better late than never!

Not a great photo, but you can see his yellow rump and isn’t that what it’s all about??

Look how cute I am!!

I’ve put the commercial suet away, as it’s too warm now, but the one Orange-crowned warbler, Oreothlypis celata, who enjoys the suet, still shows up to bathe. 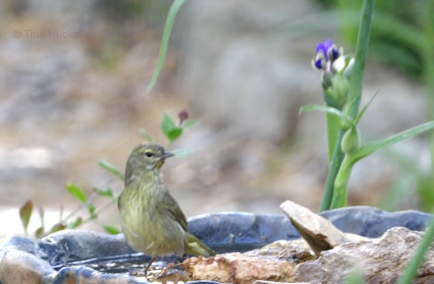 The streaking on the breast is pretty. I wish I could capture the orange crown. Maybe next year…

He’ll be leaving soon too. Sniff.

As for the year-rounders, they’re always welcome.   A rare set of photos of the female Red-bellied woodpecker,  Melanerpes carolinus, shows her beauty. 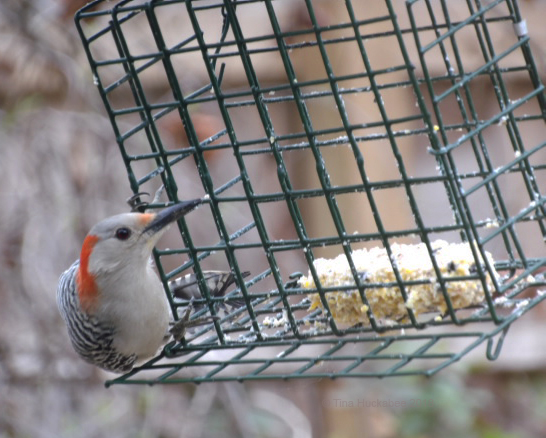 The male’s head is completely red;  it has no gap in the color,  like this female.

Red-bellies are shy birds;  I see the male daily; the female is a rarer visitor, but both love  suet.  Since removing the suet, they partake of the black-oiled sunflower seeds.  I don’ t know where they nest, but hope to see their offspring later in the year. 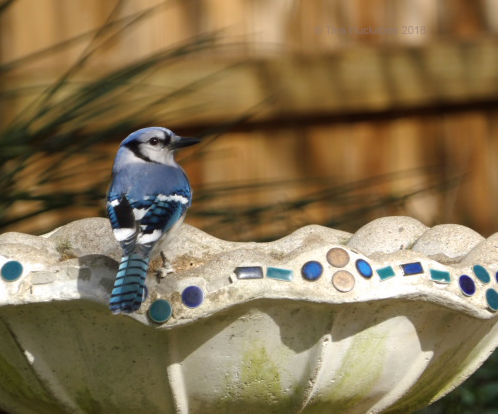 Are you talking about me?

This winter was different from the last few winters: fewer Starlings (yay!), but also, fewer Yellow-rumped and Orange-crowned warblers (boo!).   There were more American goldfinches and fewer of the Lessers.  Hawks wouldn’t stay out of the garden, but the Eastern Screech owls, who’ve been nightly companions for years, have vacated the neighborhood.  Things are changing and as migration season kicks in, I hope to observe unusual birds as the come to rest, feed, and bathe on the path to their breeding grounds.

Yup, these cuties are back and rumbling around!  The unofficial mascot of Wildlife Wednesday–Green Anole, Anolis carolinensis, hasn’t lost his wariness of this gardener.  He has nothing to fear from me, I adore these charmers.

As an aside, I was asked by the nice folks at Gardening Know How to write as a guest blogger and wrote about our beekeeping adventures.  You can find a link to the articl here.    Thank to Gardening Know How for the opportunity to spread the word about bees–some of my favorite critters!

Whether you’re gearing up for growing, or settling down for resting, what critters kept you company this past month?  Please share your photos and stories of wild critters this past month.  Remember to leave a your link when you comment.