Cut the cake!!  We’re celebrating a birthday today, or maybe it’s an anniversary? Whatever it is, it should involve cake (as everything should), and more importantly, a hats-off to you garden bloggers who made Wildlife Wednesday so much fun this past year.   Each first Wednesday, notwithstanding my own angst at readying my post for publication, I eagerly awaited the fascinating stories and stunning photos that graced my screen at the click of the  mouse.  Thanks to all of you for what you taught and shared, and for your enthusiasm and participation–Wildlife Wednesday wouldn’t exist if it wasn’t for you! And if you’ve read, but never submitted a post, please do–I know I’m not the only one who enjoys reading about wildlife in our back yards.

What has this year of hosting Wildlife Wednesday meant to me?  Aside from the knowledge I’ve gained by observing and identifying wildlife and also with photographing that wildlife, I’ve come to better appreciate what lives in and contributes to my gardens. I’m awed at the complicated and remarkable interactions of that garden life.   I’m more committed to welcoming and nurturing the dynamism of the natural world, even if, or perhaps especially because, it’s in the microcosm of my own little urban garden.

So on to the wild visitors who graced my space this past month!

When the pond pump gurgles and croaks, it’s time to clean out the filters.  It’s not a chore I particularly care for, but one that yields yummy food for the resident roses and often, a sleeping toad.

I think the toads in my pond are Gulf Coast Toads, Incilius valliceps.   They’re in the pond at night, and in the various quiet and dark places during the day, including the pond pump and intake container.

And these little ones,

…are everywhere in the garden at the moment.  Baby toads!!  All that adult croaking and posturing netted some action for the toads guys and toads gals and tiny, hopping toads are the result. This is an “average” sized baby, 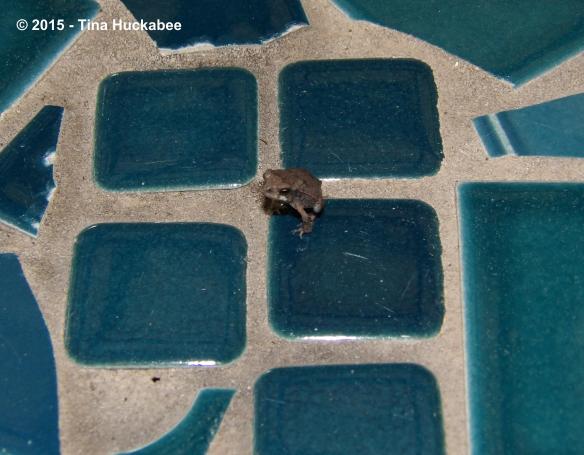 …but I’ve seen a few that were smaller.

The croaking of the adult toads ebbs and flows in my back garden during spring and summer.  I’ll hear them at night for a week or two and then there is blessed silence for a few weeks.  I once read that toads are favorites of Eastern Screech Owls, Megascops asio, and  my assumption is that the owls hunt the toads to the point where there aren’t many adults left.  A few weeks elapse for the new generation of toads to reach sexual maturity and then they’re back at it again–letting other toads, and the owls, know where they are.

The Screech Owl couple is still around!  Though they suffered a squirrel-induced end to their brood this past spring, there is apparently enough for them to hunt (see above paragraph) and they hang out now in the back neighbor’s trees.  If I’m out at sundown, I’ll see one, rarely both, swooping silently through the trees as they begin their forays into the night.  One afternoon, I heard noisy Blue Jays and witnessed Mamma Owl harassed by a group of Blue Jays.

She turned this way and that, as the Jays flew near to her and squawked, registering their protest at her roosting in the tree.

Eventually, the Jays gave up their bullying and moved along and, as if obnoxious Jays aren’t enough, she spotted garden paparazzi gawking and snapping photos. 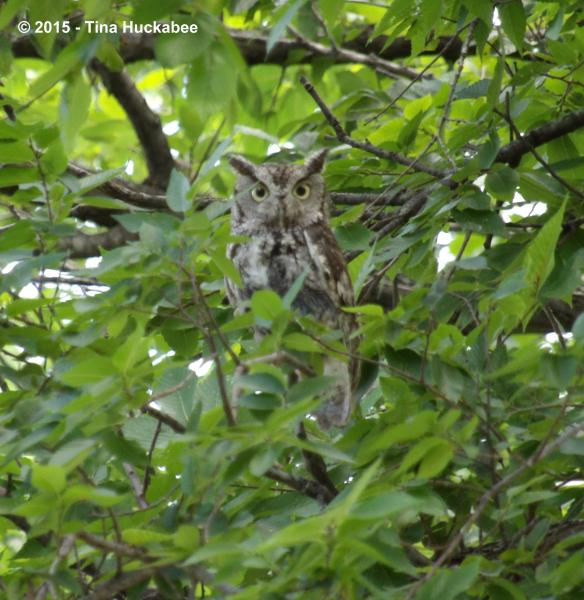 I’m pleased that the owls are still in the vicinity and if this year is representative of past years, they’ll remain through mid-summer and then, scarcely, if at all, be seen.  But sometime in December or early January, the trill of the male will once again be a fixture after sundown and the owls will take their place in the thread in the garden’s fabric.

One lazy, relaxing weekend afternoon, I was treated to the posing of this Neon Skimmer, Libellula croceipennis.

A handsome male,  he rested, keeping company with me for quite a long time, him on the foliage of the Softleaf Yucca, me in the swing.

There are lots of dragons and damsels this year, owing to our inordinate spring rainfall, but they’re always welcome in my garden.  This male Blue Dasher, Pachydiplax longipennis looks like he’s staring me down, just daring me to take his photo. 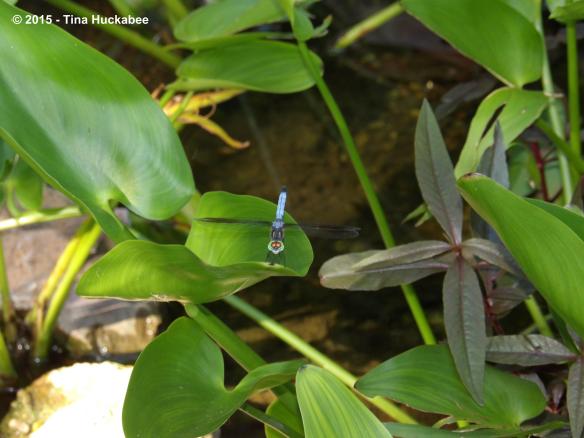 The butterflies and their offspring are active, as well.  Fennel is a popular hangout for Eastern Black Swallowtail caterpillars, Papilio polyxenes, like this one. 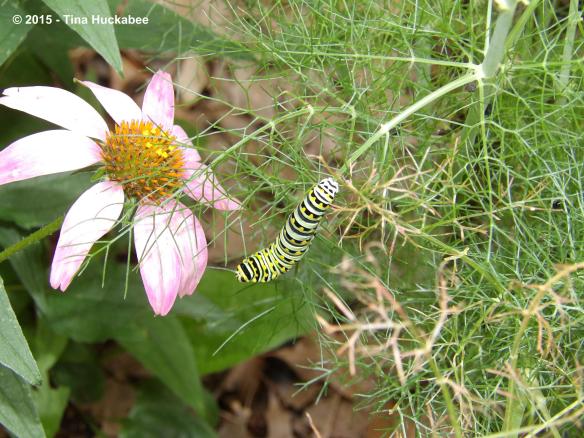 I like photographing the caterpillars; they don’t move as rapidly as the adults.

An unwelcome guest, or I should say guests, enjoyed some of the Purple Coneflower blooms.

I never narrowed down the identification of this caterpillar.  Normally, the Purple Coneflowers have no insect problems, but given our tropical-like conditions this year, it’s not shocking that there are more “bad” bugs. There are in fact, very few bad bugs-in my gardens or anywhere else for that matter. Most insects are beneficial, some are neutral, and only a very few are harmful to plants. Even these Coneflower fiends didn’t do much damage.  A petal or two went missing, but that’s about it.

I left them where I found them on the flowers.  There are a few insects that I’ll get rid of like aphids and some of the sucking insects that attack my veggies, but other than that, I take a benign view and limited actions toward insects in the gardens.

I’m tickled that my gardens are hosting Common Buckeye, Junonia coenia, this summer.

Despite the name and that they’re regularly found in this region, I rarely spot adults feeding in my gardens.  I am growing native ruellia (Ruellia drummondiana) that have matured and that plant is a host for this species of butterfly.  I wonder if the ruellia is the reason for the Buckeye visits?

I think this Purple Coneflower lover is a Southern Broken-Dash, Wallengrenia otho,

…but I would have done well to get side and overhead photos to better view the wings.

There are plenty of big, showy butterflies too.  This Tiger Swallowtail,  Papilio glaucus,

Another butterfly visiting on a regular basis is the Question Mark, Polygonia interrogationis.

Latin species name notwithstanding, I never quite understood the “question mark” part of the name.  Here’s a good shot of why it’s called a Question Mark.

See the little white curved mark and the dot on the underside of the wing?  To me it looks more like the musical notation, fermata.  I suppose Question Mark butterfly rolls off the tongue more easily  than Fermata butterfly, but I would have named it differently. These butterflies prefer rotting fruit, dung, and tree sap and only if those are not available will they sip from flowers.  I often see these butterflies in my compost bin. I guess that’s one good thing that comes from not regularly turning the compost pile.

Zexmenia is an unassuming little perennial which blooms throughout the growing season and there is almost always something feeding on its flowers or foliage.  It’s a must-have plant for the wildlife gardener in Texas.

I confess that I’ve always felt a tinge of guilt about making a place for this passalong daylily.

My decisions concerning plant choices rests with several questions, a chief one of which is: What does it feed?  I’ve never noticed anything eating from this flower and therefore couldn’t really give a good reason to host this plant in my not-so-big urban lot–except that it’s pretty.   I’ve  rationalized it as one of the junk-food plants that I occasionally indulge in.  Well as it happens, this non-native, but Southern garden summer bloomer, is a favorite of native, metallic sweat bees in the Halictidae family. 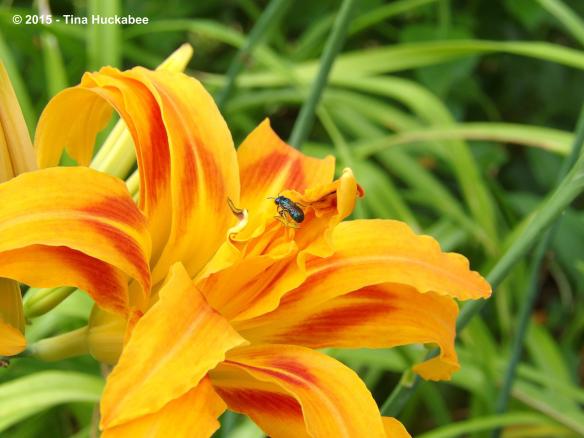 I won’t hazard a guess as to the exact identification of these bees, but several of them liked the daylilies well enough to regularly visit the blooming lilies. 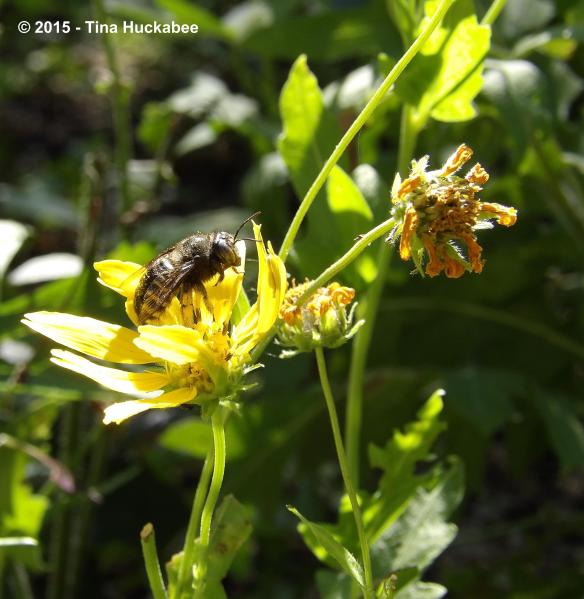 They vie with the honeybees for the Best Bees of the Garden award.

As June winds down, the rogue sunflowers are seeding out.  Members of the  Lesser Goldfinch, Spinus psaltria, crowd are visiting daily.   This male worked the spent blooms,

…as did this female.

Lessers, like most finches, love seeds, and I thought that she was munching seeds, until these shots!

Yummy petals!    The Cornell Lab of Ornithology site that I’ve linked to mentions that Lessers will “…occasionally supplement its diet with insects such as plant lice.”  Maybe she was eating lice, but it looks to me like she just needed her leafy…yellows.

Lastly, I couldn’t resist this shot of an Eastern Fox Squirrel, Sciurus niger, taken early one morning, as he was draped along the edge of the roof solar panels.  He looks like he’s hanging out, deciding what to do for the day. Do I raid the bird feeder?  Or scold the cat?  Or chase other squirrels around the tree?  Dig holes in some potted plants? So many things to do!

I know squirrels are pests, and that they chatter and annoy dogs and cats, and I haven’t quite forgiven one of its kind for ruining the family of my Eastern Screech Owls, but it doesn’t get cuter than that.

Maybe that’s why I wildlife garden.  For the cute.

Many thanks to all of you who garden for wildlife, no matter how much or little:  you’re part of the solution.  I hope your gardens received wildlife visitors this month and that you will join in posting for July Wildlife Wednesday. Share the rare or mundane, funny or fascinating, beneficial or harmful critters you encounter. When you comment on my post, please remember to leave a link to your Wildlife Wednesday post so readers can enjoy a variety of garden wildlife observations.