The fall yellows are out, brightening already sunny days, cheering the rare gloomy ones. One of the stalwart yellows is Zexmenia, Wedelia acapulcensis var. hispida, and it’s blooming once more after its end of summer sabbatical. Pollinators are busy at the small blooms.

This Gray hairstreak rested from its flitting just long enough for me to capture it with the camera.  Occasionally, it shared flower space with honeybees and two different native bees. 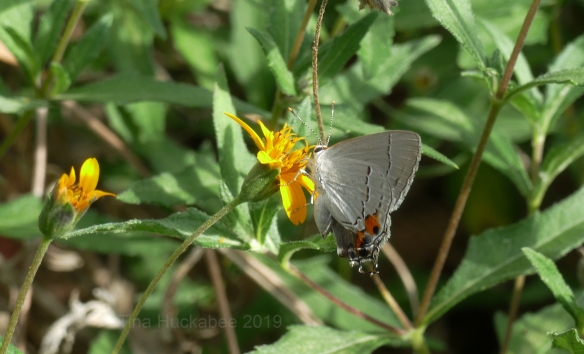 The brightest of the bright are the flowers of Plateau goldeneye, Viguiera dentata.

Goldeneye grow into unwieldy, floppy shrubs, more so if not pruned sometime in late summer.  I neglected to prune by half several that I grow, resulting in too large shrubs, some of which are now toppling over, heavy with yellow goodness.

This one stands tall, a well-behaved daisy extravaganza.

Multiple blazing blooms fill each shrub–top to bottom, inside and out.

Honeybees are all over the flowers and even finches are in on the buffet, as flowers fade and seeds appear.  Check out the orange pollen on this bee gal’s corbiculae, also known as pollen baskets, or in Tina-speak, pollen pantaloons.  The pollen pantaloons on this bee are the puffy orange pillows situated on either side of the bee. 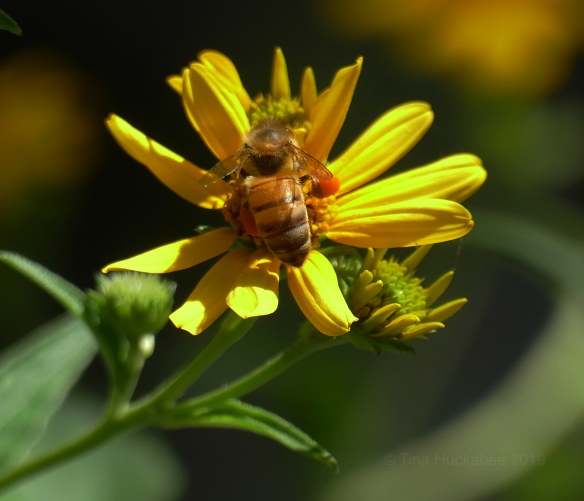 A favorite fall flower of mine is the Texas Craglily, Echeandia texensis. 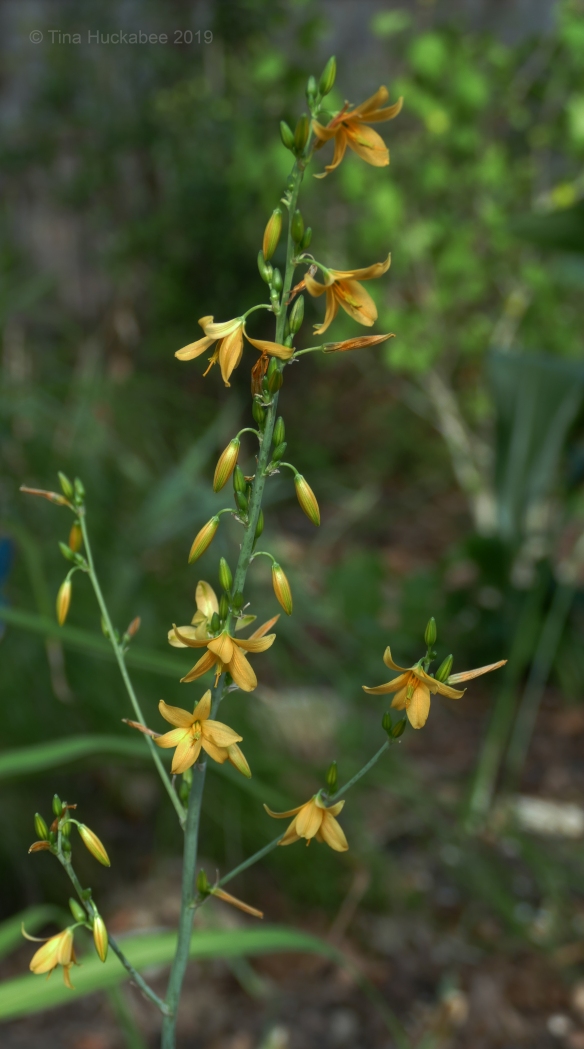 Not as brilliantly yellow as the other two perennials, this pretty produces somewhat muted yellow-orange, petite lilies.  It’s a showstopper, with the multiple flower stalks rising above the soft, green foliage.

I didn’t get any photos with pollinators, but I have noticed that it’s mostly the native bees and smaller butterflies which visit these belled beauties. Craglilies are graceful, remarkably delicate looking, but truly tough Texas perennials.  Fleshy grass-like foliage appears late in spring and remains green and fresh during summer;  slender stalks reach skyward during September and October.  The stalks are dotted with lovely little lilies.  In my garden, the Craglilies are happy in a spot with some direct sun, but are shaded during the hottest time of the day.

Rain or shine, each of these yellows are fab fall flowers.  With an abundance of cheer for the gardener, they also provide late season sustenance for pollinators and seeds for wintering birds.

15 thoughts on “The Yellows”