With scary Halloween just around the corner, I don’t want to alarm readers with the Bloody Red title.  Rest assured, it doesn’t indicate gory events ahead, but instead, something bright and cheery–and bloody red.

Oxblood lilies, Rhodophiala bifida, are naturalized autumn bulb beauties scattered throughout Central Texas. The plants originated from Argentina and Uruguay and were introduced to Texas by German immigrant and botanist, Peter Henry Oberwetter, who settled in Texas during the mid-1800s.  He collected plants, gardened, and bequeathed following Texas gardeners a legacy of brilliance.  Scott Ogden, in his book Garden Bulbs for the South, writes that Oberwetter made both Oxblood lilies and the Texas native Rain lilies, Cooperia pedunculata, available for the budding nursery industry.

The first fall rains which typically occur in late August and September–those soakers tasked with breaking the summer heat and drought–give permission for Oxblood’s fleshy stems to stretch up and out from the buried-in-the-soil bulbs, seemingly overnight.  In the next days buds appear, with gorgeous crimson flowers to follow.

My Oxbloods were a little late this year owing to our hellish hot and dry September, but they’ve arrived with the dribbles of October rain.  Pops of scarlet look at me! flowers are peeking out from underneath and up alongside, other plants.

The little crew in the above photo will need transplanting to another spot, or perhaps, to several spots, because they’re currently snuggled underneath a shrub that will become denser with time.  The Oxbloods will eventually be overgrown and disappear–and I don’t want that, do I?

I’ll mark the spot with a stake so that next spring I remember to dig up the bulbs and transplant them to a new place in the garden.  After the Oxblood flowers fade, green, grassy foliage replaces the blooms and stalks, and that foliage remains evergreen for winter.  At some point in spring (that I never notice until too late) the foliage disappears.  If I don’t mark the spot in the next months, by spring the foliage will have vanished and I won’t recall exactly where the bulbs are located.  Been there, done that.

Why not dig up the bulbs now?  An Oxblood truism is that it’s best not to transfer bulbs until the foliage has faded so that the plant completes its natural cycle.  That said, I have been guilty of moving Oxblood bulbs just after they bloomed.  The Oxblood world did not come to a crashing end, though I can’t remember if blooms happened the following fall.  My guess?  Probably there were no blooms until the following year. Plants whose life cycles are disrupted, sulk, and then get their revenge by refusing to bloom.

Because I am able and I know it’s the right thing to do, I’ll be a fastidious, rule-following gardener, staking precisely and transplant appropriately.

The bloom period of individual Oxbloods isn’t long–just a few days each–but with a number of these bulbs planted throughout my gardens, the blooming is staggered over several weeks, providing a lovely splash-of-scarlet show and welcomed fall color. 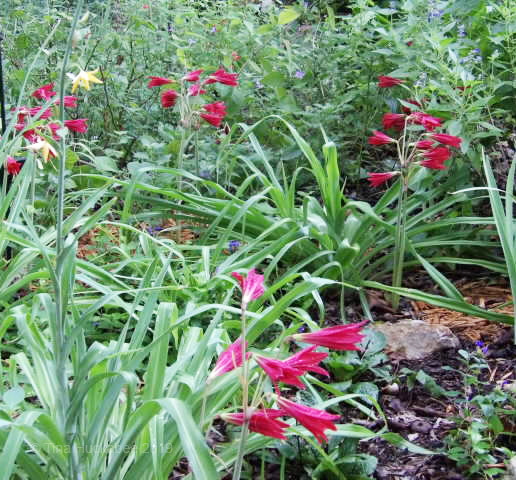 Boasting of a bit of Texas (botanical) history and bloody beautiful Oxbloods, I’m joining today with Anna and her Wednesday Vignette.   Check out her beautiful Flutter and Hum for musings of various sorts.