Standing strong and upright, my tree to study for the remainder of 2015 and most of 2016 is the American Sycamore, Plantanus occidentalis. 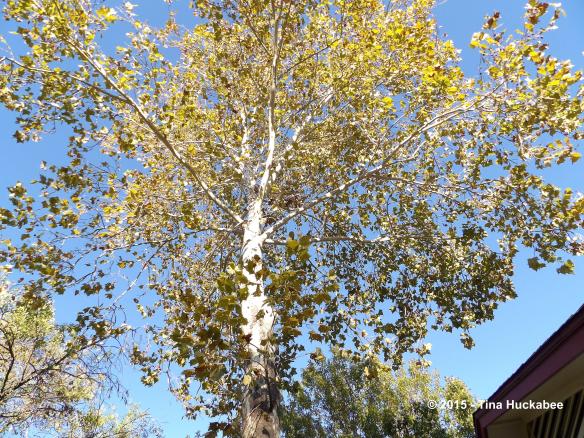 Also known by the names Eastern Sycamore, American Plane Tree, Plane Tree, Buttonwood, and Buttonball Tree, I’m sure there are other namesakes, but I like the Lady Bird Johnson Wildflower Plant Database as a main reference when profiling native-to-North America plants and those are the names listed in the database on American Sycamore and I’ll stick with that list.  Who am I to argue with the Lady Bird Johnson Wildflower Center??

I call my Sycamore Shed, which rhymes with Fred, but isn’t. As this post and the year with Shed progresses, you’ll understand why Shed is a good name for this tree.

A member of the Plantanaceae family, the Sycamore is deciduous and grows quite tall, upwards to 100 feet.  I estimate that my Sycamore is about 55-60 feet tall.  I might be off a few feet, because height estimation isn’t my best thing, but I’m in the ball park.  It dwarfs my one-story 70’s urban home.

As a general rule, the Sycamore is considered a wetland plant and prefers more, rather than less, water. In nature you’d find this tree along stream and river banks, as well as in floodplains.  So why is it planted at my house in arid Austin, Texas?  Well, it is a native to this region, though we’re at its southwestern edge, and this region busts and booms with drought and flood.  Though we are tending toward a drier climate in the last couple of decades, Sycamore trees are still commonly planted and mature specimens thrive. I wouldn’t choose to plant a Sycamore if I was in the market for a tree because it does prefer a wetter foot, but my  tree was already established when we bought our home and I wouldn’t remove a healthy tree.  It’s been a good tree for my garden:  it provides shade in summer and in winter, reasons for me to complain when leaf clean-up commences.  Additionally, it’s a great resting spot for birds, 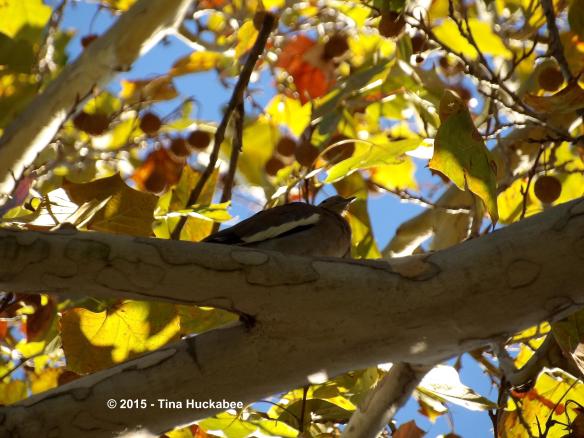 What has it done this past month?  It dropped some limbs, (remember the Shed moniker??), after strong winds from a cold front. 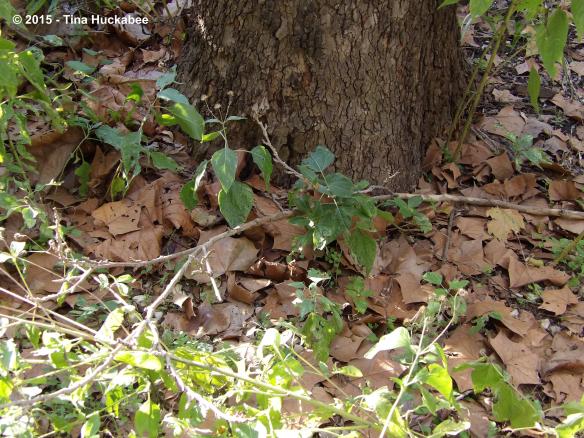 Actually, that last photo is of a limb that bludgeoned to the ground early in the summer and that I haven’t pruned and placed for the nice yard waste folks to remove.  I like to keep some limbs around in my garden for the wood-nesting bees (and anything else that digs wood) and that large limb isn’t in the way, so I’ve left it alone.  I frequently find very small limbs on the ground under this tree; here is one, with long-dead leaves attached, that has broken and is caught in the crook of larger branches, but has yet to fall. 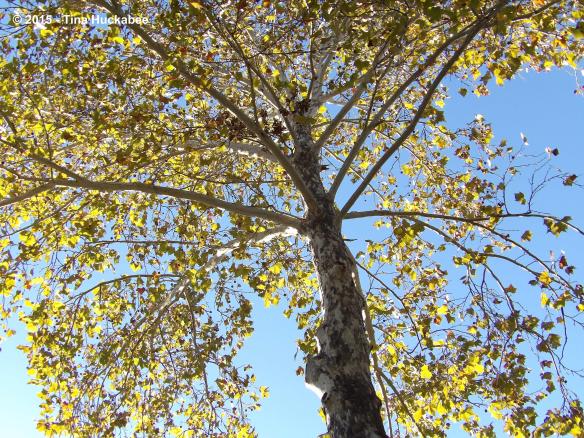 Eventually, I’m sure that mess will end up on the ground for me to place in my yard waste bin.

After the bluster of wind with our first cold front, I found this along my front raised bed, which Shed overlooks and…sheds on.

These are the individual seed remains of some of the seed balls that are a signature feature of the American Sycamore.

It’s a little odd that some seed balls disseminated now, as it’s usually in spring that the Sycamore seed balls explode and spread their seedy selves, but it was a blustery wind.

Most of the seed balls dangle in the tree and haven’t yet busted apart and floated to terra firma –but they will.  Eventually. 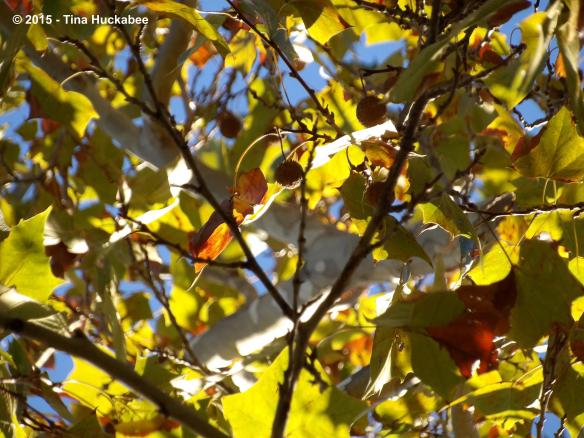 The foliage of my tree is just beginning its autumn color morph, which can be quite attractive, especially when viewing the total tree, as opposed to individual leaves.

American Sycamore’s leaves are large and thick–bright green in spring, summer, and early fall, turning a golden-yellow before they drop.  They also can suffer some insect, disease, and heat problems depending upon the seasonal weather issues.   Because of our heavy flooding in May and June, I think there was some damage to the foliage from either insects and a possible bout of Sycamore anthracnose, which is a troublesome, though not fatal, fungal disease of Sycamores.  The current condition of many leaves, with some brown patches, 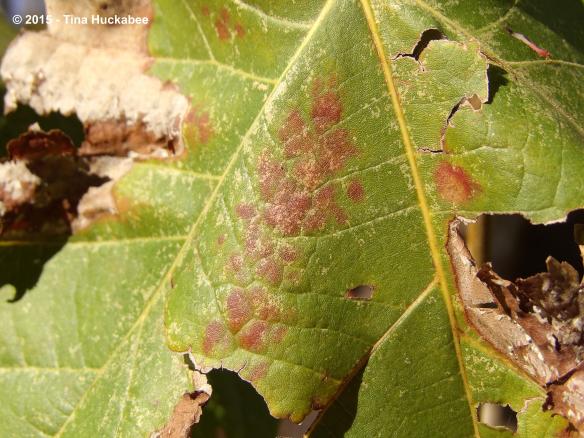 …give me reason to think that during our very wet spring, the tree was under some assault and stress, though I must admit that I wasn’t paying much attention to the Sycamore at that time.

I rather like the splash of red on the leaves, but I can’t tell you if the coloration is normal.

Perhaps in a year’s time, when I’ve followed, watched, and learned, I can speak more knowledgeably about this tree.

The American Sycamore is a hardy tree, foliage quirks notwithstanding, and even when anthracnose is pervasive and a tree defoliates, the tree flushes out with new growth and continues its Sycamore leaf thing for the duration of the growing season. 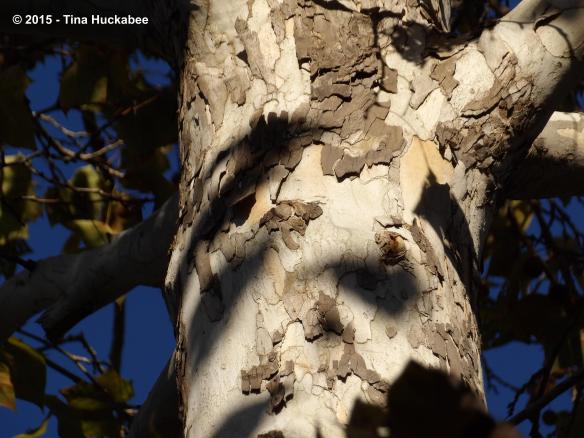 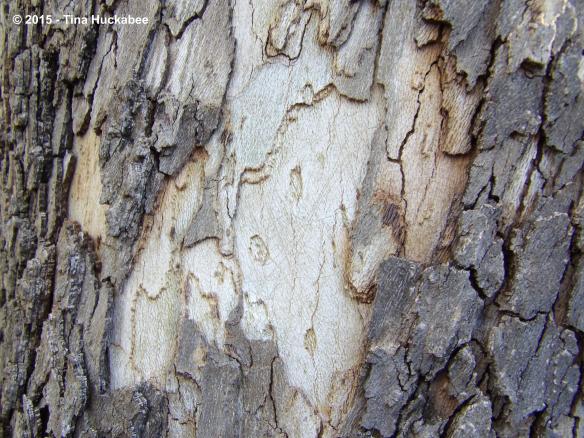 …and the tree’s height makes a definitive statement in my garden. 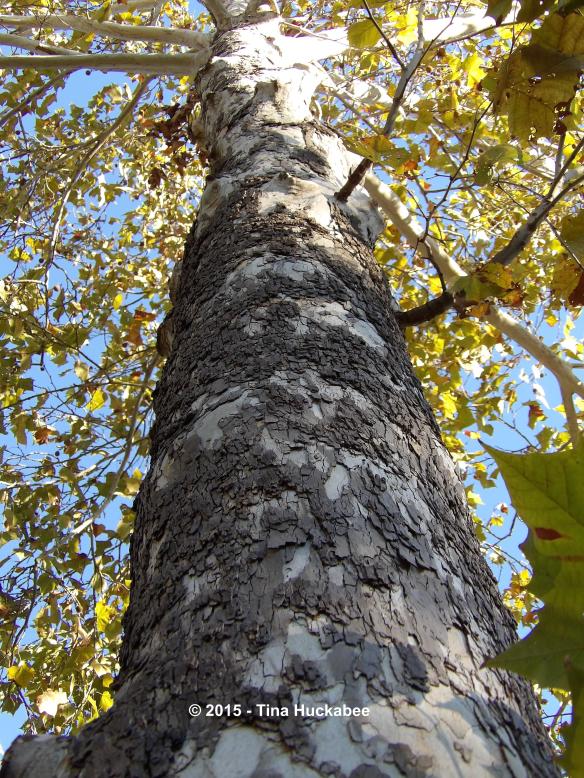 It’s a tough survivor, which is one of the reasons I’m choosing to follow it and learn more about Shed, the American Sycamore.   Many thanks to  Pat at The Squirrelbasket for hosting Tree Following.  Please pop over to her blog and learn what her tree and many others are up to for the December’s Tree Following.

17 thoughts on “Tree Following in December: Getting to know the Sycamore”