What a wild month May was for Central Texas.  Heavy rains caused severe and deadly floods in a number of cities and smaller communities in Texas, including my own.  Along with the bad, some good happened too:  in most areas of Texas, the drought of these past eight years is declared “over”.  The downside, of course, is that the drought ended with  massive rain “bombs” which exacted a high cost in lives and property.  So far, 27  people are confirmed dead, with several still missing.  The property damage is estimated at least $27 million.

I’ve continue to hear that 35 trillion gallons of water fell on Texas in May. While I’m not quite sure how that’s measured (buckets?)–it’s a lot of rain.  Here in Austin, the official rainfall total was 17.59 inches for May, compared the the “normal” of 4.37 inches.

Texas weather is dramatic, to say the least.  As National Public Radio’s Texas reporter extraordinaire, John Burnett, stated in one of his stories last week about the disastrous  Texas floods:  It seems to affirm a quote attributed to a meteorologist in 1927. Texas is a land of perennial drought broken by the occasional devastating flood.

Wildlife perseveres through it all though. Native flora and fauna have developed mechanisms to thwart, or at least, mitigate, nature’s challenges, be it drought or flood, and all other things being equal, will recover–in time.

Early in the month, there was plenty of wild and honeybee activity on native blooms in my gardens. I fear that some of the ground nesting native or wild bees that live in and around my garden were flooded out, but mason and wood nesting bees continue, mostly unmolested, by the rains.  There will probably be a dearth smaller metallic, sweat and other ground nesting bees for a time, until their populations rebound.  My gardens will be ready for them when the next generation emerges.

I identify bees (and other insects and birds, for that matter) by visually comparing my photo(s) with an example found on a legitimate website like bugguide.net or The Jha Lab of The University of Texas–assuming I can find a photo, that is.  Then I research whether the critter-of-choice photographed elsewhere visits the same or similar plant species–or if there’s any related information on feeding or behavior. I usually confirm with at least one more reference, if possible.  If I can draw a connection, either by physical similarity and/or behavior, to what I’ve seen in my gardens, combined with information gleaned on scientific websites, I feel reasonably confident about my identifications. As I’m only just learning about the multitudes of native bees in Texas (300-plus species), keep in mind that my identification of wild bees are worth what you paid for them.  Come to think, that probably holds true for most of the insects I name.

This is a Miner Bee, Perdita ignota, I believe.  During the first weeks of May, several crawled around the Engelmann or Cutleaf Daisy, Engelmannia peristenia, blooms, ending up covered in pollen–which is typical of the way bees, especially wild bees, cross-pollinate so efficiently. 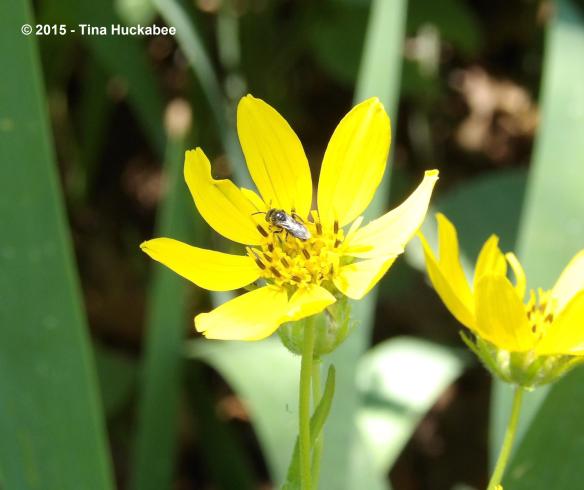 I haven’t seen any adults for a couple of weeks and because these particular bees ground nest, I’m guessing that some nests were flooded out with heavy rain.  Poor bees. 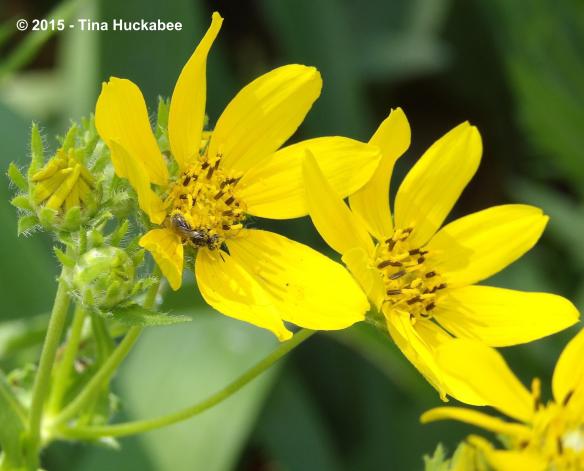 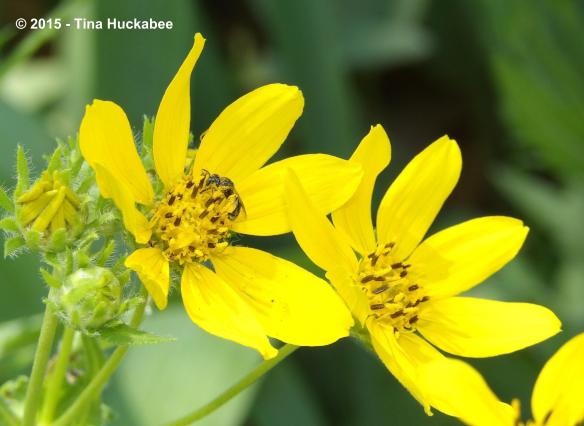 I like the sharing of flower-space between this very tiny bee and the Ladybird Beetle (one of the good guys).

But there’s an unwelcome visitor to the neighborhood in the guise of the Spotted Cucumber Beetle.  These beetles certainly chomped their share of petals and leaves recently, which I’m not thrilled about. Squishing is my preferred method of destruction (yes, I wear gloves!), but honestly, they’re pretty quick-n-crafty, therefore uncatchable.

I think the bee on the flower left of the “Native Bee” label is a Minor Bee, but the tiny bee on the right is a mystery.  It might  a wasp or even a fly.  But the body form looks bee-like to me: wider body, not so skinny, and no dangly-wasp legs.  I’m sticking with a Teesny Bee ID.

I witnessed these two Ceratina ssp., Small carpenter bees, in the process of making more bees.

After the untangling and with full pollen sacs, the female will have placed the eggs in wood or maybe masonry, then closed off the opening by packing with pollen and soil so that the eggs can hatch in privacy and protection.  The larvae will develop as they eat the pollen,  but it might be a while for the next generation pollinates and nectars–and creates more of the same.

In between rainstorms, this  Eastern Carpenter Bee, Xylocopa virginiana, visited the Barbados Cherry. 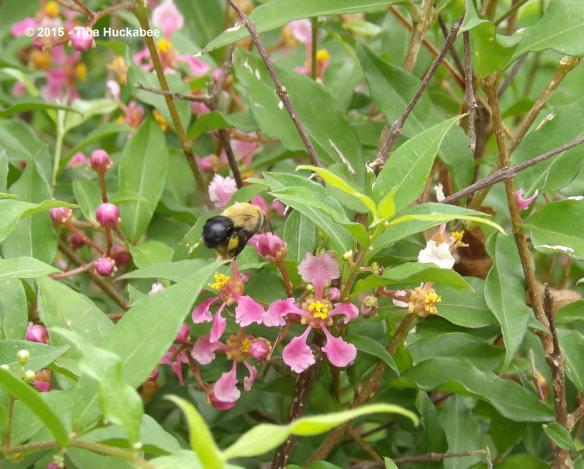 That’s quite a load, eh?   There’s something comically cute about bees carrying pollen–I always smile when I see full pollen pantaloons, whether on my honeybee gals or native bees.  And I wonder,  How does she fly with that mass of pollen? 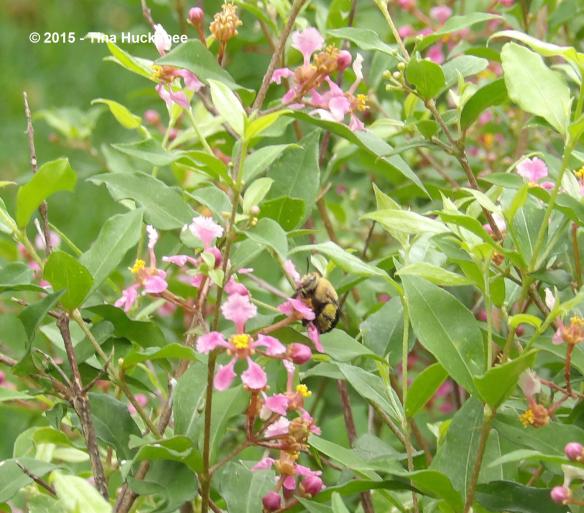 I guess she rests at some point.  As I watched and photographed her, she was vibrating along the plant, near an open bloom.  Native bees shake or vibrate to induce the flower to release pollen.

I think this one, sipping nectar at  Purple Coneflowers, is a another Eastern Carpenter Bee, though her coloring is a little different. 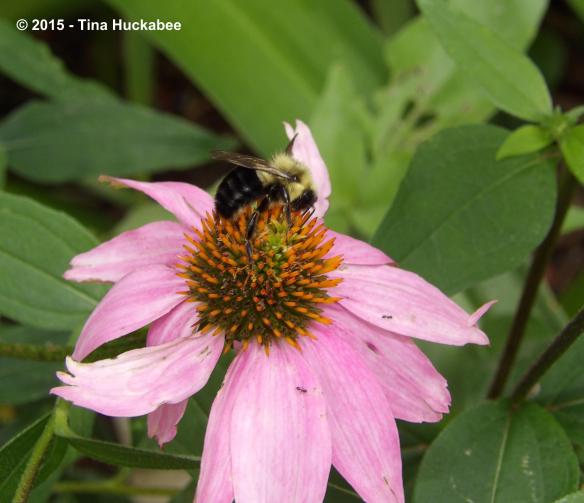 Most of the carpenter bee species  I’ve observed in my gardens are black with stripes or black with puffs of yellow, here and there.  This gorgeous, shiny black bee (or maybe fly?) is pure, glistening black. 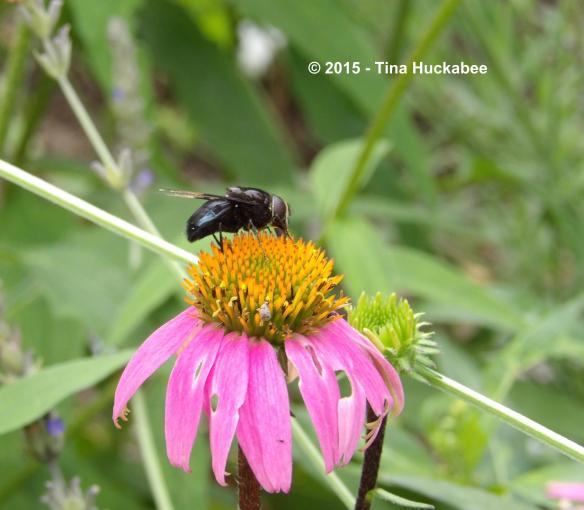 I couldn’t find a fly which meets this description, so I’m hazarding a guess at another carpenter bee species type.  There are differences in coloration between males and females (on their faces) with carpenter bees, but, I’m stumped about this one.  Any ideas?  Fly or bee?  Bee or fly?  Shall we take a vote?

It doesn’t matter all that much to me because all  pollinators are welcome in my garden.

The Syrphid Flies continued their love affair with the Engelmann or Cutleaf Daisy in my back garden. 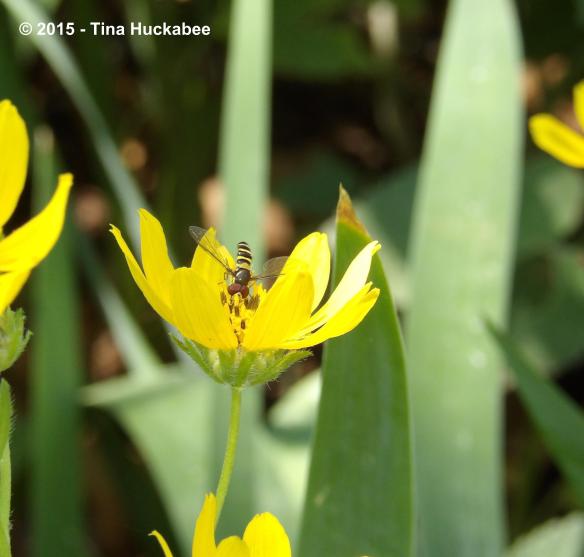 Syrphidae, also known as Flower Flies, are great pollinators and are beautiful garden visitors.  They come in a variety of color combos, but his yellow and brown is the one that I see most often and alights long enough for photographs.

Because of that, they are my favorite of the Syrphidae.

This fetching Long-legged fly, in the family Dolichopodidae, rested on the large leaf of a non-native Sunflower. Such a pretty fly, its metallic green color mirrors its chosen plinth.

Green Lacewing, Chrysopidae, insects are a personal favorite of mine.

So graceful and fragile looking, they are garden beneficials in larval and adult form.   The larvae eat spider and insect eggs, as well as aphids.  The adults feed on nectar and pollinate, as well as, adding crunch to their diet by consumption of smaller insects and eggs.

An influx of the Four-lined Beetle, Poecilocapsus lineatus, proved a problem in my garden this past month, especially on the foliage of the Cutleaf Daisy.  The Four-lined Beetle is handsome in its suit of red-to-yellow stripes, but I don’t like what they do to MY plants.

These true bugs feed on foliage, sucking the juice of leaves, causing this stippling. 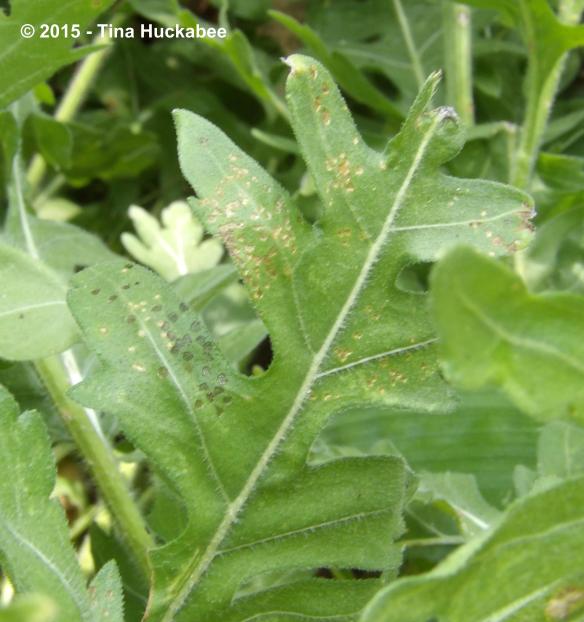 Other insects with sucking mouthparts cause discoloration to or rotting of foliage.    Not friends to the garden, that’s for sure.

The butterflies and moths are making a comeback after the floods and ready for summer action, as witnessed by this Little Yellow, Pyrisitia lisa, feeding on a Four-nerve Daisy, Tetraneuris scaposa. 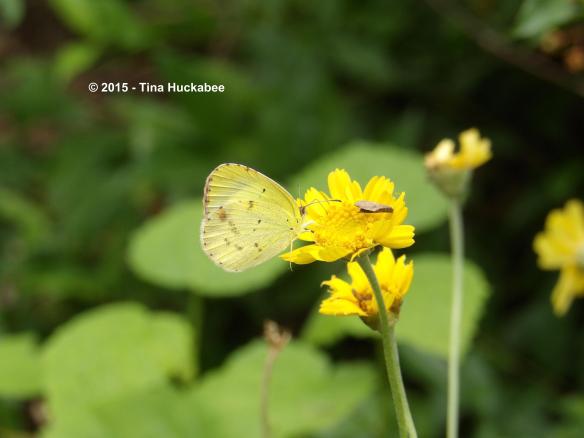 I used to see these interesting pollinators, Snowberry Clearwing Moth, Hemaris diffinis, frequently in my gardens,

…but they’ve been scarce in the drought years. I was tickled to watch this one and hope to see more of them through the summer months.

This Little Brown Grasshopper-thing, (actually, two different ones), have tooled around the Winecup, Callirhoe involucrata. 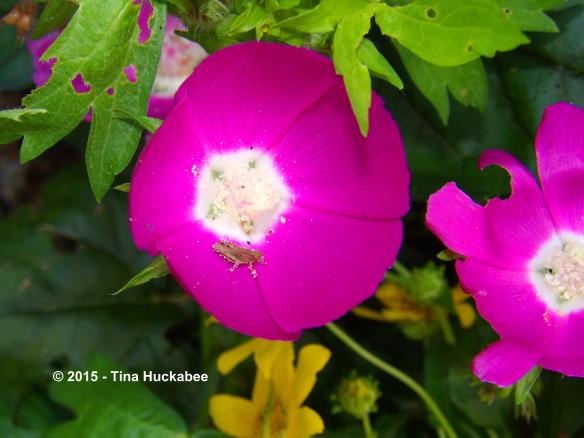 I gave up identifying this guy/gal–there are too many different grass and leafhoppers to narrow down an identity.  I have one or two other things to do, you know.  Whatever it is, I love the powder-sugar sprinkling of pollen grains and appreciated their cooperation for the photo shoot.  The photo above doesn’t show damage on the Winecup, though the one below does.  What I don’t know for certain is whether it was the grasshopper who was the villain or whether the grasshopper was in the wrong spot and at the wrong time, where the botanical crime was committed..

As for avian visitors, May was no slouch in that department.

During fall migration, I saw a male American Redstart, but due to his fast movements through the trees, I never got a good photo. I did, however, enjoy observing him for a day or two, before he headed southward.  This female or immature male American Redstart, Setophaga ruticilla, flitted through my trees and shrubs for a week or two this past month.

There were several, actually and I think they’ve headed north–I haven’t seen any of these warblers in the last couple of weeks.  I look forward to their return in September/October.

Finally, I was charmed by the antics of this Gray Catbird, Dumetella carolinensis, helping himself to my Brazos blackberries.

I feigned annoyance at his or her thieving, but I don’t mind wildlife sharing the garden bounty.  I had a bumper crop of blackberries this spring and where this particular vine is located is an ideal spot for Gray Catbirds:  it’s a tangle of various shrubs, including the blackberry vine, which provides shelter and respite.  And blackberries.

I hope your gardens benefited from wildlife visitors this month and that you will join in posting for June Wildlife Wednesday. Share the rare or mundane, funny or fascinating, beneficial or harmful critters you encounter. When you comment on my post, please remember to leave a link to your Wildlife Wednesday post so readers can enjoy a variety of garden wildlife observations.