Paraphrasing an advertising tagline from the American beef production industry, I think Bees-they’re what’s for dinner is applicable  to the Summer Tanagers, Piranga rubra,  who are visiting my garden.  In the last month, I’ve observed at least three different Tanagers flitting around my back garden. 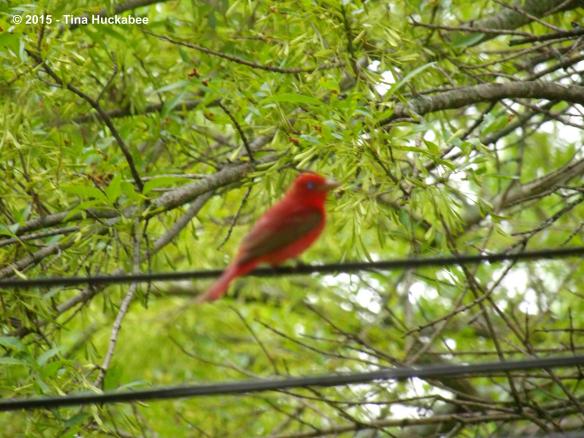 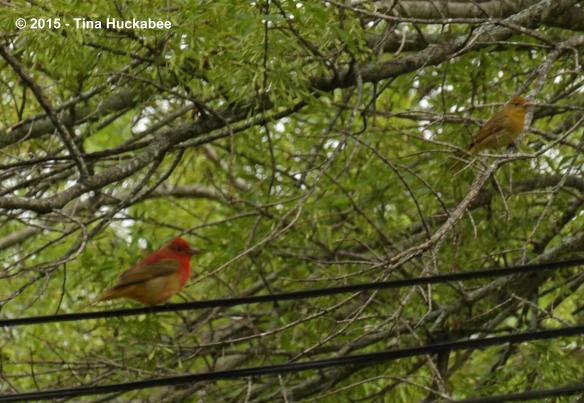 You’ll have to excuse the photos–I’ve yet to take a clear pic of any one of these stunning birds, but the male is pure bright red, the female is yellow, and the red/yellow combination is an immature male.  I have no idea where they’re nesting, but these eye-poppers breed in Central Texas and surrounding areas west, south, and eastward during summer.

When I first saw the birds, all three over the course of a weekend, I was baffled about why they were landing only on the house side of the Shumard Oak tree and nowhere else in the garden. They’d land in the tree, hop from branch to branch, moving constantly. Occasionally one would flit to the Retama tree or, more likely to the electric/cable wires adjacent to the Shumard.  Eventually each bird would fly back to the neighbor’s tree, or beyond, which is the direction they always come from.  I couldn’t figure out what they wanted from that particular spot in the Shumard.  The Husband mentioned off-handedly, “Maybe they eat bees.” 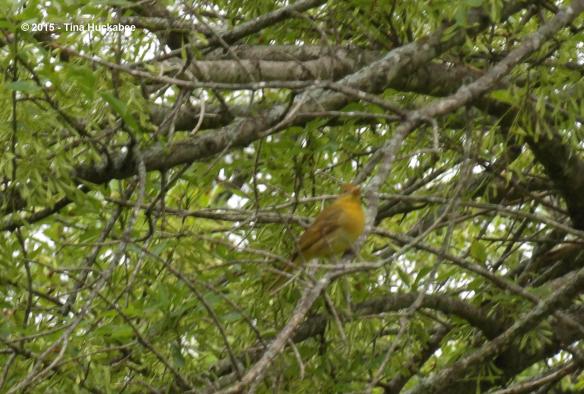 Really?  The birds and the bees?  One is the hunter and one is the prey?   I checked the Cornell Merlin phone app while I was watching the Tanagers that Sunday afternoon and Summer Tanagers are, in fact, bee and wasp eaters. The Tanagers were landing in the Shumard just above where the honeybee hives are located. 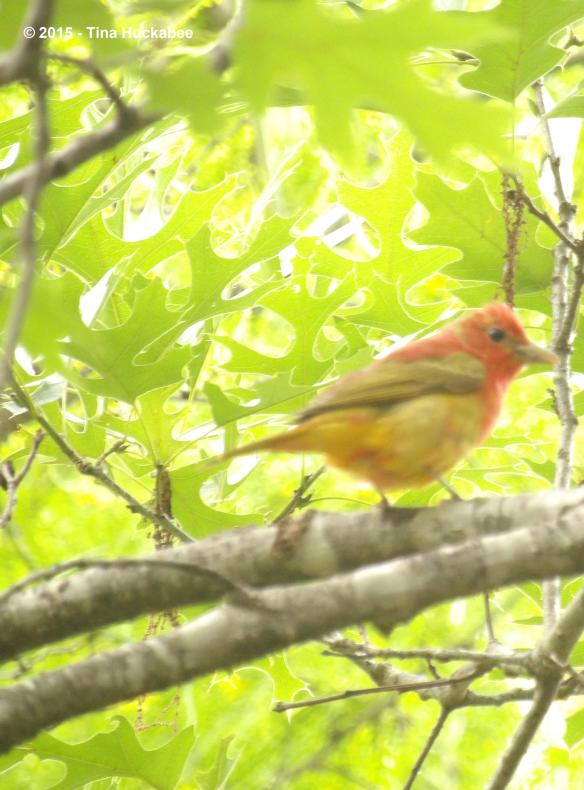 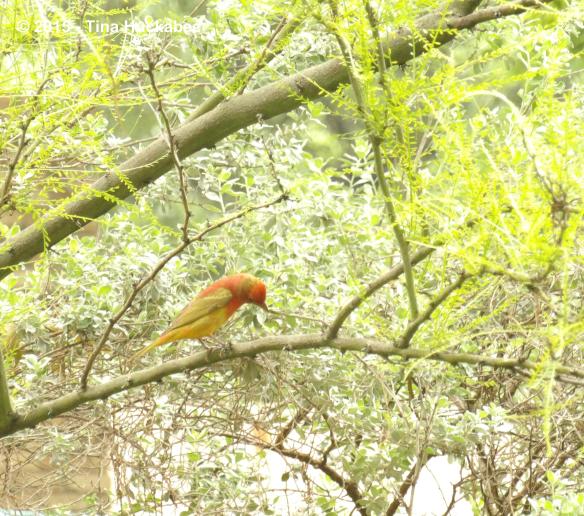 Indeed, I’ve watched them fly into the flight path of my honeybees, swooping in, then banking off sharply as if they caught something; I assume the brilliant hunter flew off to an unseen spot to eat.  I’ve witnessed an immature male Tanager flutter just above a Purple Coneflower, where a native bee was hard at work nectaring.  The Tanager hovered briefly, then seemingly decided that maybe honeybees were more easily picked off for a meal and he flew away. 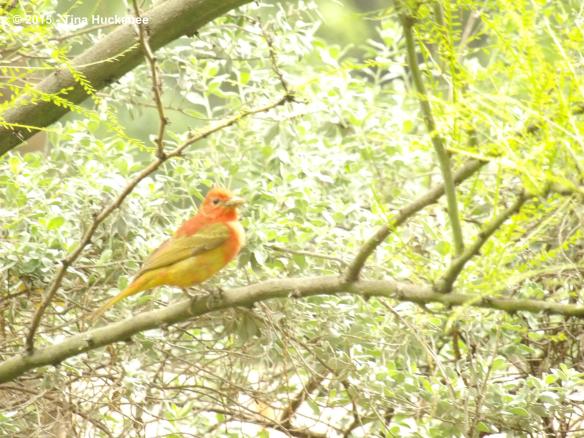 At about the  time that the Tanagers were making daily, or nearly daily, appearances, I also realized that both of our honeybee queens were dead.  I’m not sure what happened to the queens, as they were dutifully laying eggs at the beginning of spring. We might have accidentally rolled them during a hive check (probably) or, they might have simply died or were so weak that the worker bees decided to replace them–that happens.  The previous weeks, as part of my spring beekeeper management, I’d conscientiously destroyed queen cells (that the girls insisted upon making), in order to quell their desire for procreation.  I did such a good job that the ladies were left without their leaders.

Beekeeping is hard.  Especially when the beekeeper doesn’t know what in hell she’s doing.

So I found myself in a bit of a fix: two dead queens, which means two dying hives–and   Summer Tanagers gobbling honeybees on a regular basis.  Even without the hunting birds, the bees are doomed if I don’t requeen both hives, and the Tanagers assure that inevitability sooner, rather than later. What to do?  A quick check on the Beeweaver Apiaries website showed that they were sold out of queen bees until June.

JUNE!!  My hives won’t make it to June.  I emailed  the owner, whom I met last year, explained my predicament and she took pity on me, or more likely, my hapless honeybees.  She immediately ordered two queens sent, via UPS, on an overnight shipment to me.  Beekeepers stick together and help each other.

The queens were to arrive on a Thursday and when they didn’t as expected, I shifted into sleuth mode  to discover where my queens were stranded. UPS claimed that the package was delivered to my address at 9am.  I wasn’t home at that time, but Bee Daddy was and there was no delivery of queens or anything else.   I combed the neighborhood on my bicycle, searching  for a misdelivered queen bee package. I received some odd looks from neighbors when I explained what I was looking for and that proved interesting.  And weird. I won’t go into the details about what I did to find the package of bees, but the queens and their attendants were misdelivered that morning to an address that was one number off of mine and about ten houses away.

Yes, I made a formal complaint to UPS.

The hives were requeened and new bees are hatching as I write–there will be plenty of honeybees for the Tanagers to eat. 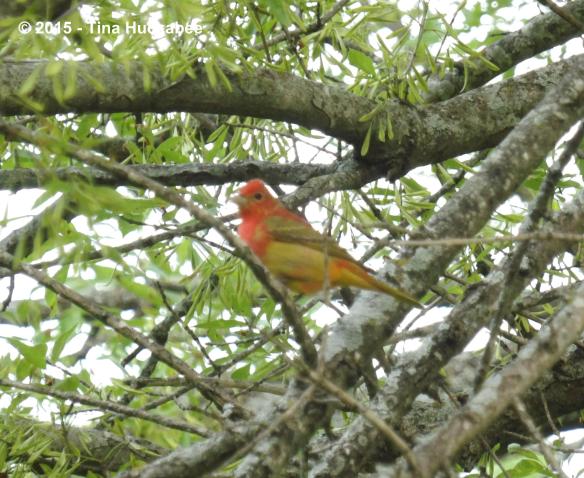 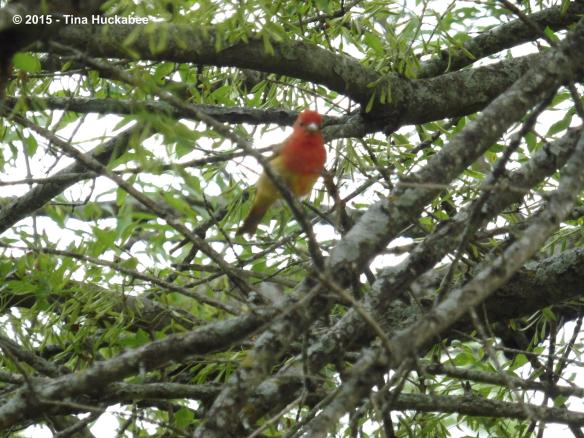 But hunt and eat they do.  One of my bedroom windows is just above where the hives are located.  One morning recently, I opened the window to a gorgeous male Summer Tanager, perched in the Shumard,  gazing hungrily down at the hives.  He was so intent on snagging a bee for his breakfast that he didn’t notice  my movement at the window.

This past Sunday morning, my little Astrud cat was staring at something as she sat on that window sill, as she often does. 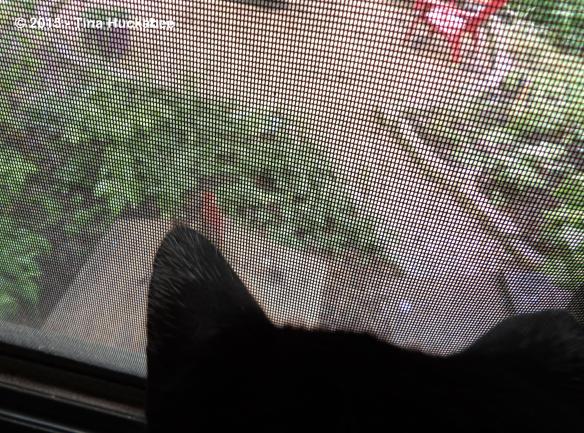 Can you see him through the less-than-pristine screen?  The Tanager is poised on top of Scar (one of my hives).  The beautiful avian scamp flew downward for a second, likely to the entry board of the hive, then flew back to the top with his prize: a honeybee in his beak  for lunch.  He mangled my beloved little bee and deposited her down his gullet–while perched atop the hive.  That takes a certain amount of impertinence.

Additionally,  I have  mixed emotions about witnessing the effrontery.

Do I mind the Tanagers hunting the bees?  No, actually, I don’t.  I do feel a little sad about the hardworking foragers, toward the end of their lives, being snarfed down by the gorgeous feathered fiends.  And having hives readily available is tantamount  to shooting fish in a barrel.  After all, it’s not even like the Tanagers have to hunt that hard. The hives are right there and the bees are coming and going constantly, with no thought to their own personal safety–the health of the hive is what drives them.

Meanwhile, the Tanagers have found a pretty sweet deal.

In targeting my honeybees for the benefit of their tummies, the Tanagers won’t decimate my hives.  Yes, they’ll kill some and if they’re around all summer, many.  But the honeybees are in much more danger from pesticide or herbicide use on a plant they might forage from than they are from the Summer Tanagers. I don’t garden with chemicals, but the bees forage within a three-mile radius–who knows what they take nectar and pollen from? The Tanagers will kill some bees, but they won’t cause either of my hives to collapse because of harmful chemicals. The balance of prey to predator won’t be disturbed–as long as all other factors remain relatively equal.

Ahem.  Good beekeeping practices are part of that equation. 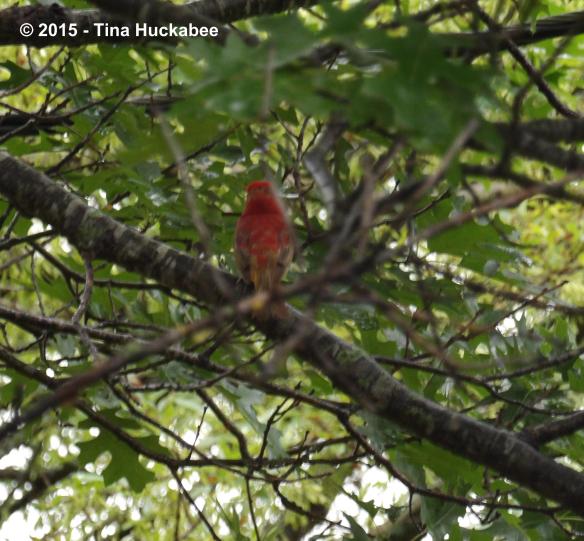 So I’m welcoming the Tanagers to my garden and consider myself fortunate to observe these fascinating and beautiful birds.  I don’t see them everyday.  In fact, a couple of weeks passed and I didn’t see any Tanagers.  Then, saw one or two for several days–hanging around the beehives, of course.  Besides bees and wasps, Tanagers also eat fruit, though I didn’t see  them at the ripening blackberries. 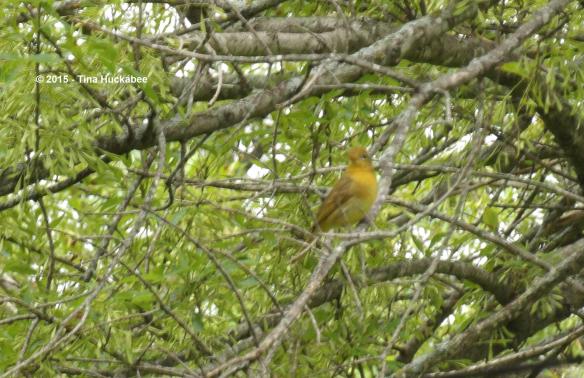 Apparently, the Tanagers have plenty to eat.  Truthfully, I rather them dine on the honeybees than the native bees, since the honeybee hives are protected and have a healthy location in which they thrive.  The native bees nest in and around my gardens, but they also nest elsewhere and may not always find such a tolerant and beneficent host.

Beekeeping and wildlife gardening–a tricky balance with those two, but there clear advantages with both endeavors and my garden and the surrounding environment are the winners.

I’m sure the bees are delicious to the Tanagers, but I think I’ll stick to eating honey.