We’re all just hanging out, lumbering through these last few weeks of true Texas summer and waiting for rain.  Like this little guy, a Carolina anole, Anolis carolinensis.

He appears to me as if he’s expecting raindrops to cascade down the rain chain–any moment now!   Along with the rest of us summer-weary Texans, he would love it if some of the wet stuff would break the Texas August heat and end our summer doldrums.

In 2011, during the record-breaking drought and high temperatures of that hellish summer, we suffered through almost 100 days of over 100 degree temperatures.  That summer, I once saw an anole creep up to a dripping planter after I had hand watered.  The little anole parked himself under planter and commenced licking the few drops of water.   Poor little guy– he was so thirsty and there was so little moisture in that garden, until the planter dripped. It was a simple but poignant reminder, underscoring to me the necessity of water to all: wildlife, plants, and people.

I’m sure this anole hasn’t searched much for moisture this summer as there was rain earlier, though not in the last month or so. 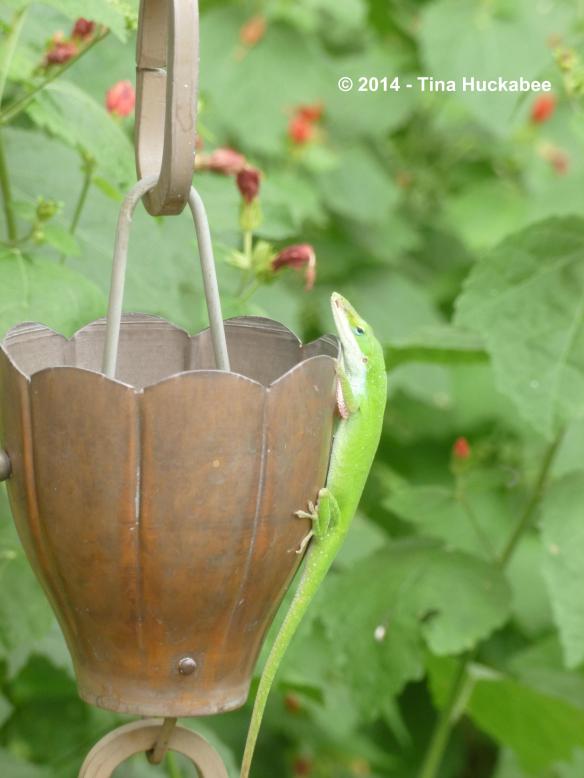 September Wildlife Wednesday happens next Wednesday, September 3rd. Will there be rain and some cooler temperatures before then?  Stay tuned!

Wildlife Wednesday.  Join in and post about those wild critters, looking for rain or not, who visit and live in your gardens.

September and its promise of cooler temperatures, more regular precipitation, and softer days is almost here.

4 thoughts on “Waiting For Rain”