Recently, several people have mentioned to me that they’ve planted Barbados Cherry (Malpighia glabra) and asked, “why is it taking so long to grow and bloom?”

Barbados Cherry is a slow-growing, mostly evergreen shrub, native to Texas and Lands South Of The Border. It isn’t an exciting plant.  It’s not something that catches the eye and takes the breath away.  But for a tough and hardy hedge for privacy, you’ll find none that serves better.   It’s also an excellent plant for attracting wildlife to your garden.

In Austin, Barbados Cherry will freeze when it gets below 32 for any length of time.  I’ve never had it die back completely–usually it stays leafy on at least some parts of the shrub.  I used to prune at the end of winter, but now  I just  wait until spring and reliably, the leaves flush out–bright, cheery, little  green leaves all over the branches.  I  prune only for shape, (or if the branches are rubbing up against a car, since mine is planted along the driveway).

I planted this group about fifteen years ago.  It took FOREVER for them to do anything.  After year four–Boom! The group really took off. This has been a great hedge for privacy and the birds love to hang out in its thicket.  Birds also love the bright red fruit that develops after the blooms.    Currently this is the only fruit on any of my plants.

I’ve observed some mockingbird action lately, so he/she/they might have gobbled the others up.  (There is also a Turk’s Cap planted in the same area and a mockingbird has been dining on that fruit too.)  Additionally, Barbados Cherry is a  host and nectar source for bees  and butterflies. The flowers look like tiny Crapemyrtle blooms to me. 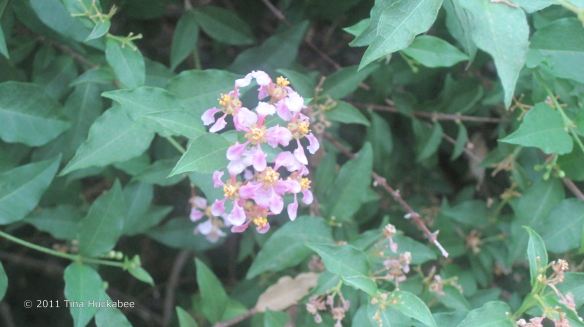 According to  the NPIN site, one of the common names for Barbados Cherry is Wild crapemyrtle.  The bloom-time  lasts four to six weeks during both spring and fall and appear all over the shrub.  Usually, though not this year,  there are both blooms and fruit on the shrub and this red-pink combination is striking.

I planted this group at the back of my garage about four years ago.

They have a while to go before they reach the mature height of five to six feet. 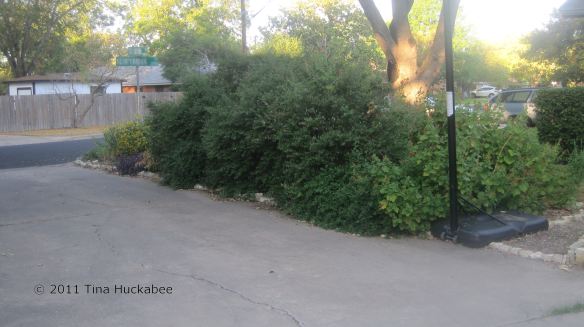 This past Summer From Hell, I watered four times, by hand.  That’s it.  There was a point, in early August when the shrubs were droopy–I don’t think I’ve ever seen that in this plant before.  But with a little drink,  they perked up and survived the heat.  They’re still surviving the drought.

So, if you’ve planted lovely Barbados Cherry recently, be patient–with time, it will grow up to become a large shrub that requires very little care.

And may the (gardening) force be with you.