I let it happen again.

Somehow I managed not to notice that the Coral Vine (Antigonon leptopus),  was draping, ever-lower, over the rickety arch.

Every year, I promise myself that in August, as the Coral Vine begins its fall growth spurt and bloom-up, that I’ll control the vine so that it doesn’t grow too low into the arch.

And once again, I was so entranced with this lovely vine and its sweet, little blooms, that I didn’t have the self-discipline to better control its growth.  So, until it freezes, we have to bend over to walk through the arch.  We’re not a tall family, but we’re not hobbits, either.

Well, there are worse things to deal with in the garden.

My garden hasn’t experienced the first frost of the year.  I know some outlying areas around Austin dipped below the freeze point, but  in central Austin, we’re still green ‘n growing.  Even so, I thought it best to snap a few photos of my Coral Vine before winter’s chill.

This gorgeous vine is native to Mexico, but very common in the mid-to-southern parts of Texas.  It has lovely heart-shaped leaves,

and strands of lacy, pink blooms.

In Austin, it tends to bloom in the latter part summer and into fall, until the first freeze and then, it’s a goner.  It grows from a large tuber and the new strands will appear late in the spring.  Established plants grow remarkably quickly once the temperatures warm.  I  don’t spy new growth until late April and my arch is usually covered within a month.   Coral Vine is drought and heat tolerant.  It will produce a smattering of blooms in the summer, 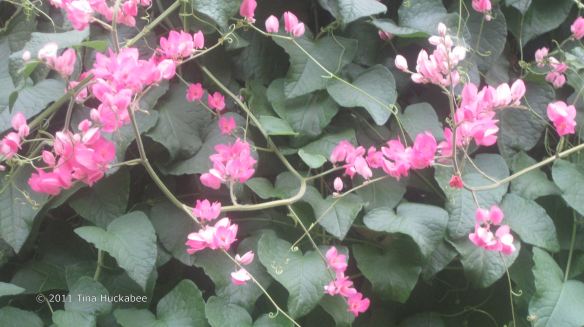 but its main bloom time begins in August.  Mine is usually swarming with bees–so much so, that the arch is animated with movement.  However, in this drought year, the vine didn’t grow quite as rampantly, didn’t bloom as prolifically  and there weren’t as many bees buzzing about.  Still, Coral Vine remains a favorite of those who do visit.

About three years ago, the Coral Vine was completely covered with blooms and therefore, with bees.  I frequently observed an anole lizard, who apparently lived in the vine.  He would saunter out from somewhere in the vine to bee hunt.  I only saw him actually snatch a bee once for his meal, but he was a big, healthy guy, so I guess he was getting plenty of bees to eat.

Coral Vine is a wonderful vine to grow on a trellis or fence.  It’s beautiful, easy, fast-growing, a great wildlife plant. 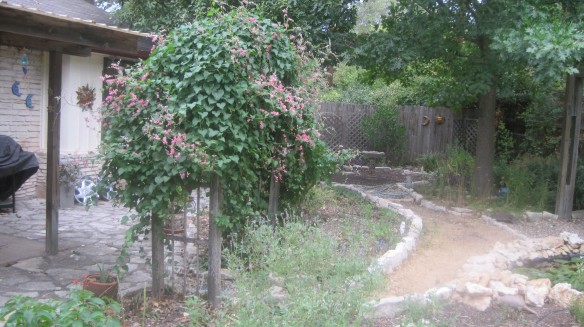 Just make sure that it doesn’t grow so much that you have to machete your way through its thicket.

2 thoughts on “We’re Not Hobbits”