This is what became of my lovely Soft-leaf Yucca, Yucca recurvifolia.

The nascent pup shows the discoloration common with a probable fungal infection from growing in a too-wet soil.

Additionally, the large root came out of the ground without complaint and was rotted, stinky, and mushy–those last two terms aren’t technical, but they are descriptive. 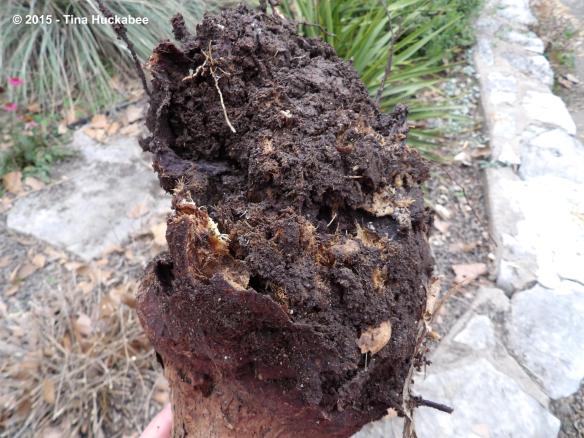 I don’t have a good shot of them, but there were also fat, gross grubs in the mass of squishy, smelly root.  The grubs crawled back into their fetid lair before I took these photos and I wasn’t going to stick my hands or even a trowel into the disgusting mess to look for them.  You’ll just have to take my word that they exist.

Here’s a head of one, though, in case you’d like to look at it. 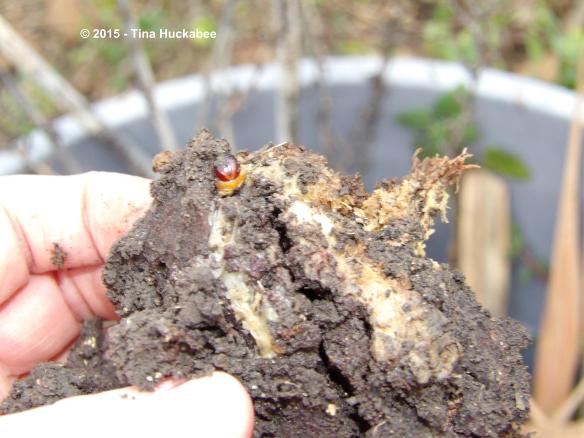 I wrote about my concerns for this yucca in December 2014 in this post.  Once I removed the mature plant, I hoped that the root with the yucca pup would survive and thrive. At that time, the pup looked healthy and the root was firmly ensconced in the ground, so my positive outlook for the health of the yucca was reasonable.  Alas, I believe over watering by the neighboring lawn zealot truly did this yucca in during winter.  I think fungal problems were established and the damp of winter took care of the rest.

It’s a bummer, losing this yucca.  I’ll miss the evergreen form and gorgeous, twice per year bloom stalks.  Oddly, I don’t have a photo of the deceased yucca, but this is another Soft-leaf Yucca in my garden, 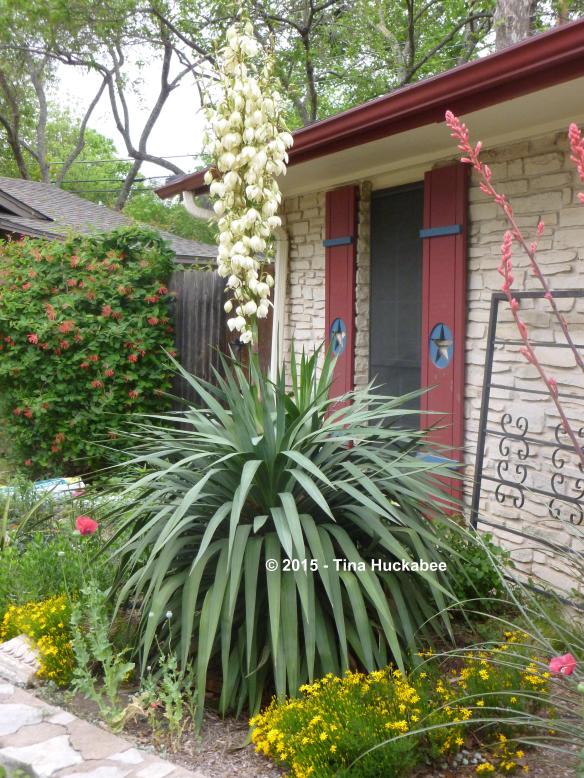 …and it, as well as the other eight specimens, seem healthy.  Soft-leaf Yucca is  striking in the garden–foliage and blooms add so much in grace and structure.

I’m not going to run out and buy anything to plant in the newly vacated spot.  If design was my priority, I would replace the yucca with something else that is evergreen with interesting structure.  Instead, I planted these two dormant Plateau Goldeneye, Viguiera dentata.

They’ll flourish in the western exposure and they can handle much, or little water–whatever is dealt them. I pulled these two out from a work area at the side of my house where they receive no water from me–they established themselves because that’s what Goldeneye do.  An excellent wildlife plant, attracting pollinators and birds, Goldeneye are pretty too.

The two perennial Goldeneye, planted together with others in this garden, will make a bold statement along the street and edge of my property and provide sustenance for wildlife throughout the growing season.

I’m continuing to mark Texas Native Plant Week which I began on with this post on Sunday. This week, I’ve written about Rock Rose, Pavonia lasiopetala and Turk’s Cap, Malvaviscus arboreus.  Today, we visit Sunflower Goldeneye or Plateau Goldeneye, Viguiera dentata. Also, today is Wildflower Wednesday, so I’m joining with Gail at clay and limestone for our monthly tribute to all flowers wild.

There are lots of lovely fall bloomers here in Central Texas, but none which brighten the garden more than the Sunflower Goldeneye–which I usually shorten to just plain old Goldeneye.

There’s nothing plain about this eye-catching ray of sunshine! 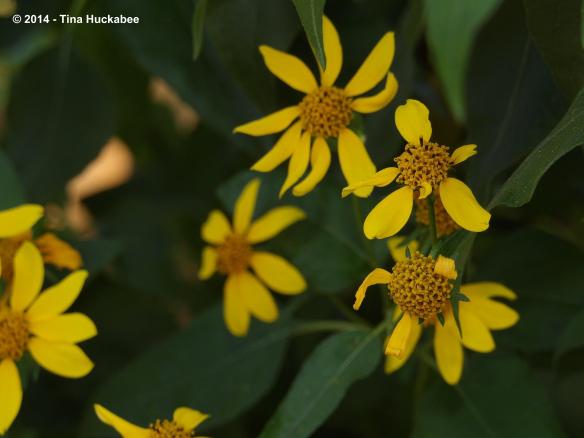 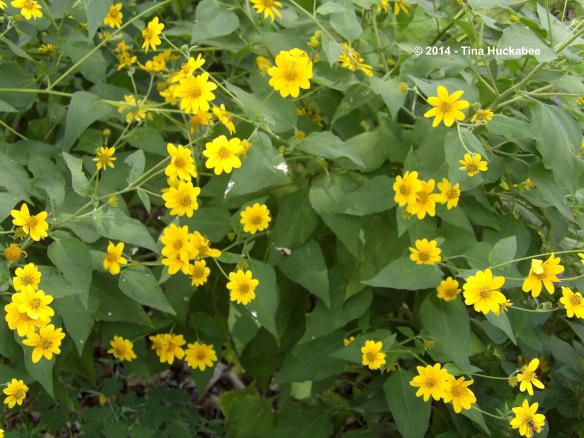 I love this blindingly cheery perennial sunflower!  Native to Central Texas, west to Arizona and southward through Mexico and Central America, this plant packs a powerhouse of wildlife goodness.  Goldeneye is the host plant for two butterflies, the Cassius Blue and the Bordered Patch (neither of which I’ve ever observed around my Goldeneye), but is also favored by bees and other butterflies.  In my gardens, my hived honeybees are so all over the Goldeneye that often the plants look like they’re  moving. 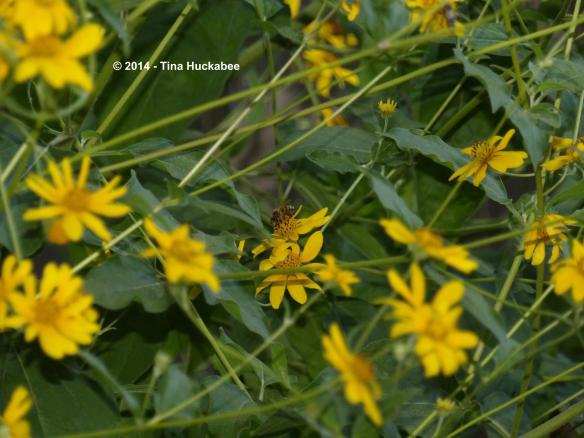 And once the flowers are spent and seed production begins?   It’s a finch feeding fest!

Specifically, the Lesser Finch really love the seeds of Goldeneye.  They’ve entertained me well this past week.

After the first hard freeze, the Goldeneye die to the ground.  They’ll reappear though in late spring, growing fully and rapidly.  During the course of summer, there will be a smattering of blooms, but mostly this perennial is all about its foliage in the summer, which are typical of sunflower leaves, large and rough textured. As Goldeneye fills out, it’s lush and neat in appearance. But after the first late August-September rains, Goldeneye burst forward in height and width and blossoms with masses of sunny, yellow blooms. 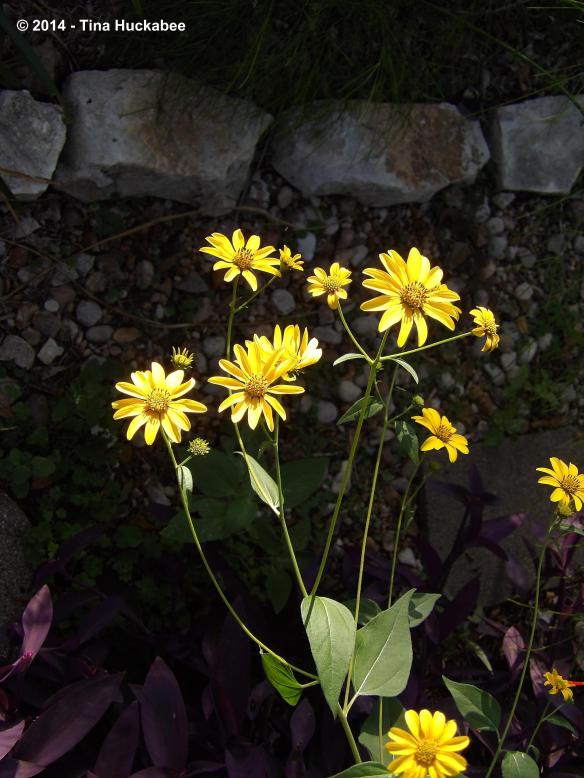 Like all wildflowers, there’s always some variability and difference between individual plants.  Some Goldeneye flowers are larger, some smaller; some Goldeneye have very narrow petals,

…and some have wider petals.

I appreciate that each plant has its own “personality”–just a little different from its neighbor.

These sunflowers grow and bloom in shade, but they get tall and lanky and tend to flop over once they are bloom heavy,

…which they will become in the fall.  In mostly sunny spots though, they tend to remain more compact and stable.

As with other wildflowers, you should tolerate the rangy growth habit toward the end of Goldeneye’s growing season. 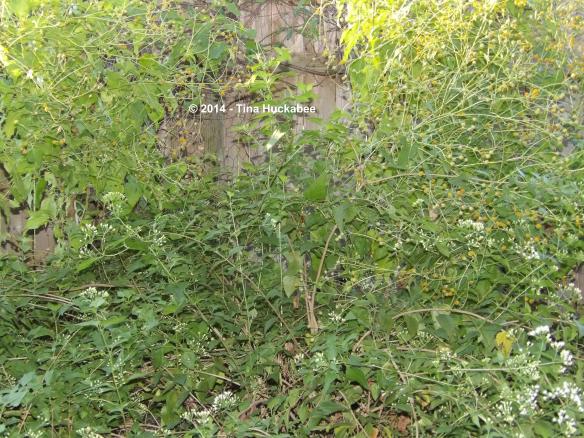 As lovely as most native plants and wildflowers are to us, they didn’t evolve to look pretty for people, but to provide food and cover for wildlife. Wildflowers are beautiful in our cultivated gardens for most of their growing season, but there’s almost always a short period of time after blooming and seeding, that wildflowers look spent from their wildflower production activities.  Be patient with your native wild plants during that period of time. 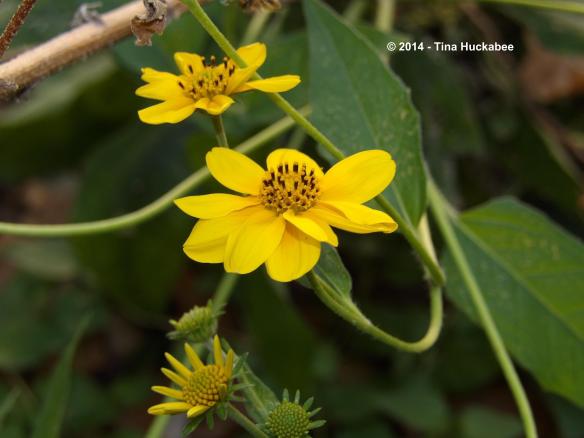 You’ll be glad you did!