Winter’s bare trees allow for good bird watching, especially when it comes to the local raptors.  It’s also the time of year when we prepare to host Eastern Screech Owls, Megascops asio, as they court, breed and fledge their young in the Red Oak tree in our back garden. We’ve been privileged to observe these shy beauties for the last 8 years and certainly hope that they once again choose our back garden for their home territory in these next few months.  I haven’t seen an owl yet this season and I’ve missed them this winter.   Once in early October and then once more in early November, I heard a Screech Owl whinny  announcing to others this is MY territory!, but I haven’t  heard the common owl trill as the owls are living their lives: hunting, flirting with a potential mate, and then working with that mate to raise a family.

Not a great shot, but you get the idea.

…as well as occasionally scuttling through my garden early in the morning.

I also suspect the same opossum as the thief who had stolen a small board at the entrance to one of my honeybee hives–I found it in a corner of my garden, weeks after it went missing, dropped nowhere near the hives.  Because I’d noticed bits of non-oak leaves and Mexican feathergrass shards caught in the branches just below the owl nest box, I thought the opossum might be squatting in the box, but I  never actually saw her enter or exit. Squirrels have moved in to the nest box in the past and I hoped that a rogue opossum would be too large.

I hoped, but I was wrong.

As Screech Owl breeding season is nigh, we’re placing a new camera in the owl house this year because we enjoyed watching Mama Owl in her box last year–until the camera pooped out just after she laid her 5th egg.

This past weekend, the ladder out and up and tools at the ready, The Hub was up in the owls’ tree.

I remained terra firma and sollicita because 2016 wasn’t a great year for his bones–all 20 that he broke due to a bike accident and related glitches. That’s all we need: for him to tumble off the ladder in the service of wildlife watching. Thankfully, he didn’t tumble, but he did find an owl box interloper in the guise of this fella:

Actually, I suspect she’s a young, possibly pregnant, female opossum. What to do with a malingering marsupial snuggled in an owl nest box?

I have no objection to opossums. I don’t mind them sipping at the pond and bird baths, eating from the compost bar, or even rummaging through my garden, but I do mind, very much, that this one has decided she needs the owls’ house for her own.

Once the top of the box was removed, the opossum didn’t comply readily with our wishes for her to vacate the premises, nor did she cooperate when The Hub attempted to scoop her out onto a branch with a long stick. She peeked over the top of the nest box once or twice,

Too high up to jump! 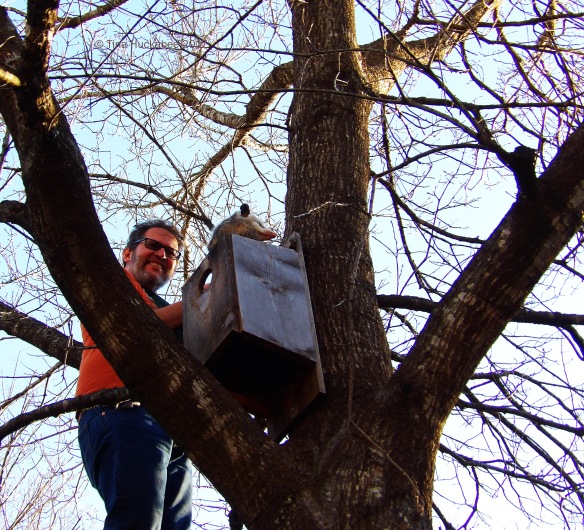 Is there an opossum-sized ladder I can use?

…but decided that staying put and hissing was her best bet. With The Hub remaining up in the tree, we contemplated our options:  leave the opossum in the house or scoot her out, forthwith? We decided that the best thing to do–for us, the opossum, and the nest box, would be to carefully lower the nest box to the ground, 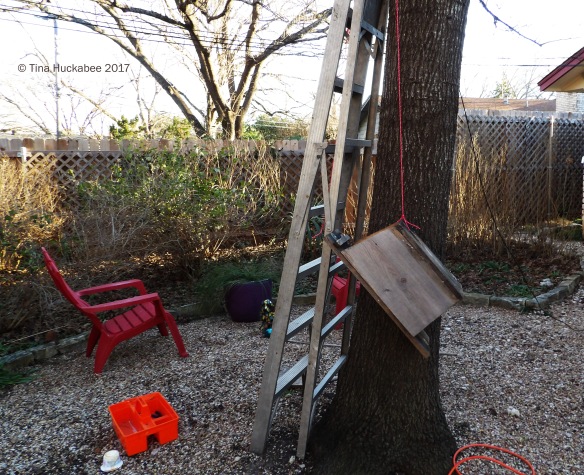 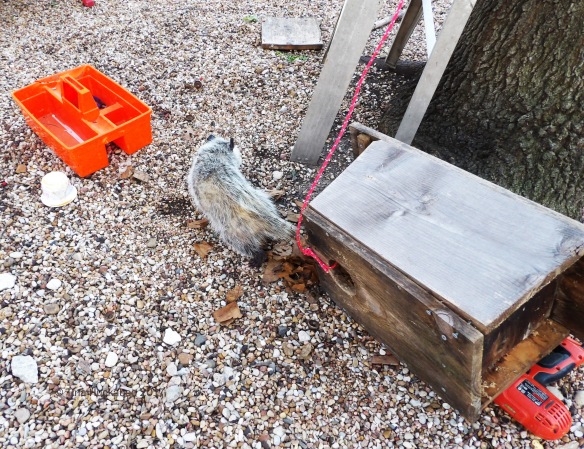 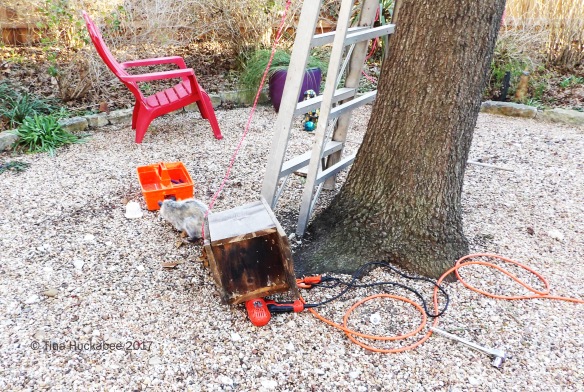 …allowing her to safely waddle off,

I admire her steadfastness at claiming the box and for the obvious efforts at collecting leaves and grass for her nest and I do feel badly that we evicted her from such prime real estate.  But we didn’t build the box for her and I’m sure she’ll soon find another cozy spot in which to nest.  Opossums are not the brightest of critters, but they are remarkably adaptable–they eat almost anything and can nest almost anywhere.

Opossums thrive in urban environments–like my back garden.

We’re leaving the nest box down for the week and plan to put it back up into the tree, camera affixed and ready to go, by next weekend.  Learning about and enjoying the life cycle of the Eastern Screech Owls has been a great pleasure for us.  I hope that we can continue with that this spring.

As for Ms Opossum, I have no doubt that we’ll cross paths again.

Every winter, we clean out the Eastern Screech-Owl house in preparation for the upcoming brood season. This year, when The Husband took down the owl house for its yearly cleaning, he decided to quickly cobble together another because the one used for a couple of years was worse for wear. Screech Owl houses are easy to build.

We installed the newly constructed house and waited to hear the tell-tale trill of a male Eastern Screech-Owl, Megascops asio, letting his partner know that he has, indeed, found a lovely home in which to raise a family.

I heard him trill one evening in December, just after sundown, but only a few times since.  I also haven’t spotted an owl head poking out of the hole at sundown–which typically happens once the couple settles in for breeding and brooding and it’s a pretty cute thing to see.  No observable owl isn’t  that unusual–Screech Owls, while comfortable in and adapted to urban settings, are shy and elusive, although I usually see and hear more activity than has been the casethis year.

I wasn’t particularly concerned, until I saw this:

He or she moved in and has been quite comfy squatting in another’s home this winter.  I forgot this might happen–usually it’s a young squirrel and I’ve engaged in this battle of wills before: a fuzzy-tailed rodent moves into the house, cranky gardener chases him off and round it goes until the squirrel moves out and the owls move in. This year though, Squirrel Nut-twerp (SN) has been quite the recalcitrant squatter.  On and off throughout January and February, SN has outsmarted me.   I placed an old pillowcase early in the mornings,

…that I’d remove at night.  I didn’t do this everyday, but as often as I felt like I needed to in my quest to dissuade SN from his desired digs.

I’d think to myself: Ah ha, e’s gone!  Victory is mine!!  Then he’d be back in the house, looking cute and if I might suggest, just a little smug, at besting me. 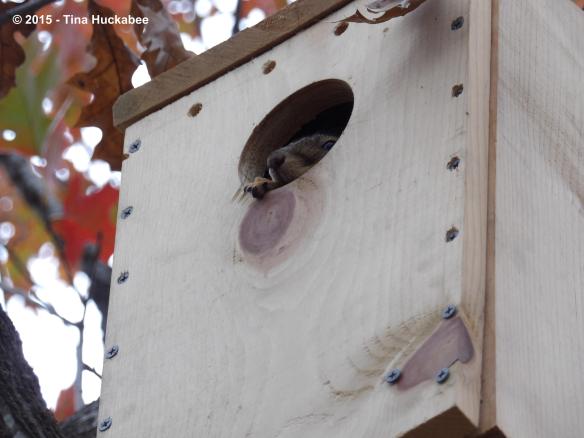 Last Thursday, as the sun sank to the west and as the coldest night of the year commenced, SN was in the brood box, looking askance at me, clearly wondering what I was going to do.  You gonna chase me out again, lady? The forecast predicted rain, freezing temperatures and ice.  He looked at me, I looked at him. I capitulated. OK, Bub. You can stay there for the night.  I didn’t have the heart to chase him off. Truthfully, I’d given up on hosting an owl family this year.  I’ve seen and heard so little from the neighborhood owls, that I assumed the couple moved on to a less squirrelly location. My adored owls and I were vanquished. Squirrel Nut-twerp was the victor in the annual maneuvering for desirable tree trunk real estate.

Just after sundown on Saturday evening, I stood outside, looked up in disappointment once again at the hole being devoid of  a fuzzy owl face and I turned away.  Feeling quite disconsolate and sorry for myself, believing with full conviction of my abject failure as a wildlife gardener, I morosely stared off into the opposite distance from the brood box, appreciating the form of budding trees against a darkening sky.  After a minute (probably less), I turned around and saw two perched owls in the tree–the female (the larger of the two), whinnied in the way of Eastern Screech-Owls and her mate, who sat just beyond her, on a different branch, quiet and probably annoyed at me.  We regarded each other, though I’m sure they saw me more clearly than I saw them.  One swooped off, the other followed, both in complete silence.

Happy, happy wildlife gardener am I!

Sunday morning, I noticed Squirrel Nut-twerp nosing around the brood box.  First, he climbed on top, timorously looking in from above.  Then he scampered to the limb in front of the box, poking his nose close to, but not into, the hole–then withdrawing in a hurry.

Hmmm, that’s a good sign that something scary resides in the box.

Further circumstantial evidence of inhabiting owls presented when I stepped outside a little later to the raucous  kerfuffle from 10 birds, perched in the tree, pointedly cawing at the brood box. Wrens, a mockingbird, blue jays all in noisy chorus,  protesting…something. New neighbors? That’s one of the sure signs of Screech-Owl inhabitants:  other birds, as well as their offspring,  are potential meals of the owls and once owls move in to the brood house or tree hole, those prey make known their displeasure about the predators. As a friend of mine said:  there’s nothing like some killers moving in to galvanize the neighbors into action.  I understand the birds’ trepidation. While I cheer about the rats and mice hunted by the Screech and Great Horned Owls, as well as the various hawks in the neighborhood, I lament the loss of fledglings and migrating songbirds who will, undoubtedly also be prey.

Sunday afternoon, absolute proof of the Screech couple and their choice of house.

Isn’t she adorable, even if she looks a little grumpy?    I don’t know where Dad Owl is, close by more than likely, but I haven’t spotted him yet.

I’d like to think that I helped my owl buddies by annoying Squirrel Nut-twerp to the point that she moved on, but I suspect it was all the owls’ doing.