Like last month, February wildlife adventure was all about the birds; it’s been a bit too cold on a regular basis for much insect goings-on.  That’s fine–I enjoy feathered friends and entice them to my gardens in winter with food and water.

I’ve seen this single gal-I think she’s female because she’s quite large, perched atop trees around my home many mornings throughout this past month.

She’s a Red-tailed Hawk, Buteo jamaicensis, and I hope a juvenile hawk, not ready to take a mate yet, rather than an adult without a mate.  That would be sad.  I’ve also seen her hidden in Live Oak trees, upsetting the Carolina Chickadees and scattering the feathers remaining of her meal of White-winged Dove. 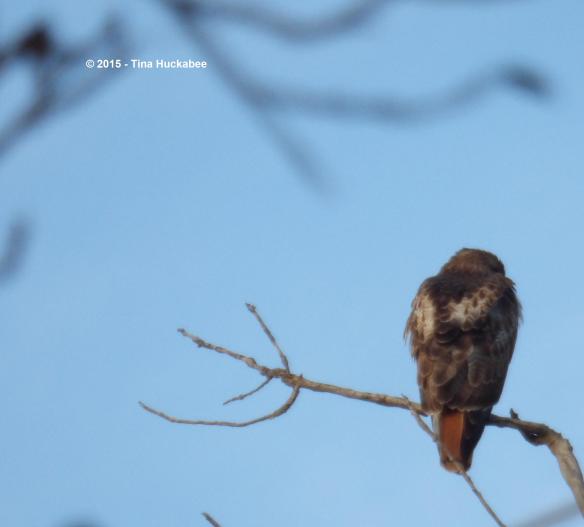 She’s magnificent, sitting at attention early in the morning or as she glides from tree to tree, on the hunt in the neighborhood.

House Finch, Haemorhous mexicanus, is a  common species of bird living year-round in my gardens.  I realized that I didn’t have any photos of this charming, gregarious finch. Here, this male munches a sunflower seed.

I need a companion photo of a female House Finch–they’re not as colorful, but cute and perky, nonetheless.

Every February I look forward to the hordes of the migratory bird, Cedar Waxwing, Bombycilla cedrorum. I usually hear them before I see them; they travel in groups and sing with a high-pitched keening as they swoop across the sky to settle in trees. 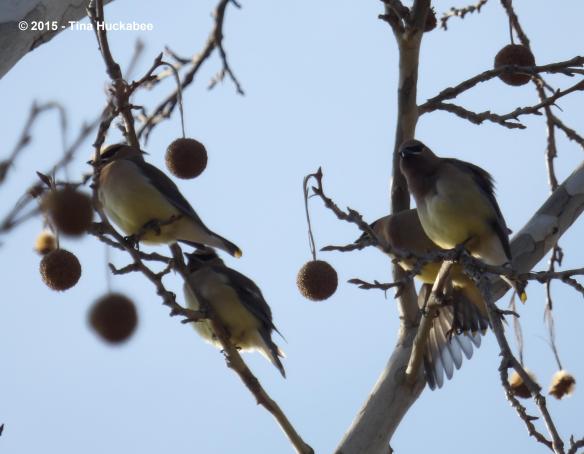 They are gorgeous birds and maybe just a little vain.  They’re always preening,

…and displaying their pretty feathers for all to admire,

…and posing so you can view them at best advantage. 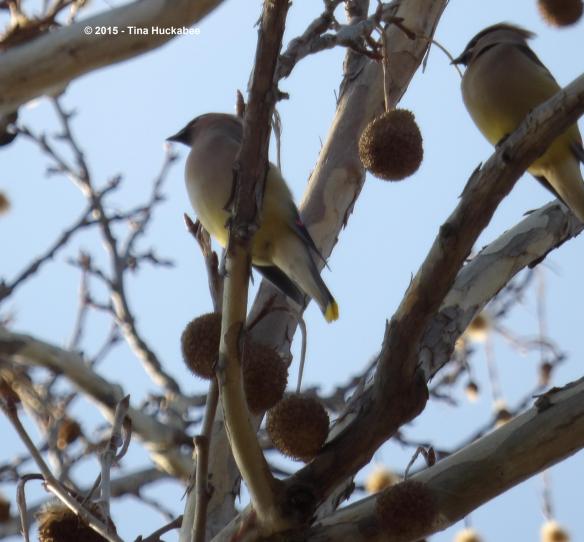 Cedar Waxwings are social birds too; they remind me of those girls in high school who can’t do anything alone–they go everywhere and do everything in a group. 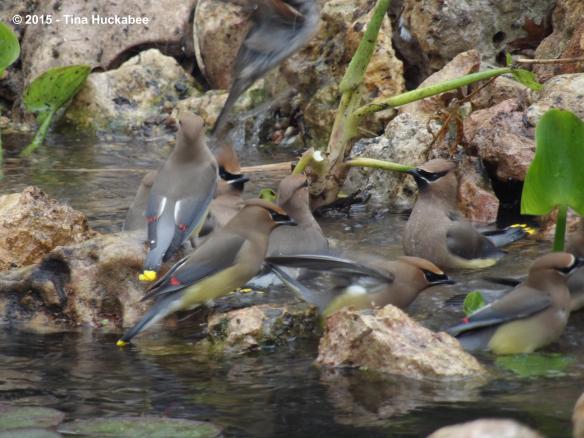 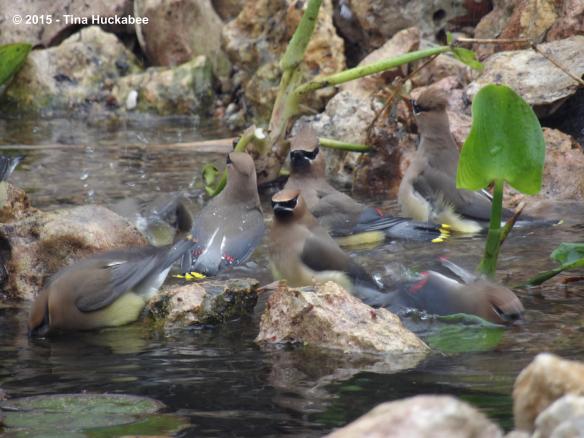 They are clearly having a grand time bathing in the newly cleaned pond,

….splashing, with flashing of red and yellow, and dashing in their Mardi Gras-esque masks. Can birds be full of themselves?

I see male Northern Cardinals everyday, but the ladies are shyer and elude the use of my camera with their quick movements through the cover of trees and shrubs.  I find them as attractive as the masculine of their kind.  This lovely lady Northern Cardinal, Cardinalis cardinalis, was not so flighty as is typical of her female friends. 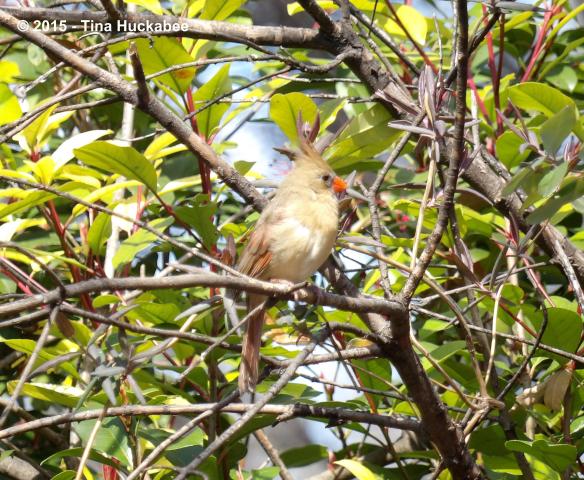 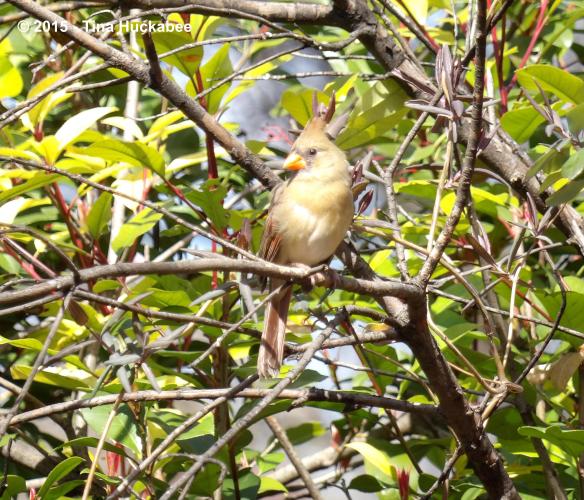 She landed and sat in the woody shrub for a long while before taking flight to another.

I love the funny, quizzical look on this female Lesser Goldfinch, Spinus psaltria, stopping for a sip at the bar.

I meant to do that. 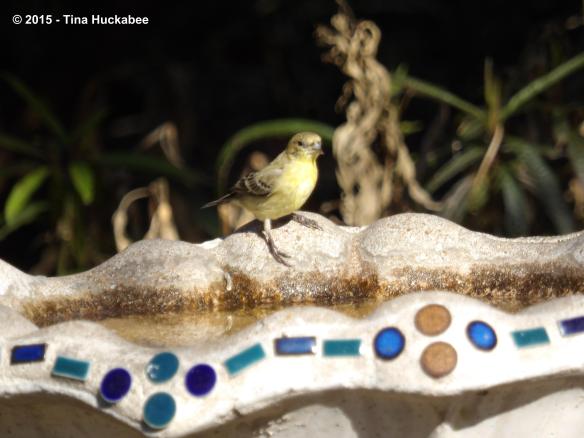 This Black-crested Titmouse, Baeolophus atricristatus, landed in a small tree after snatching a seed from the feeder. 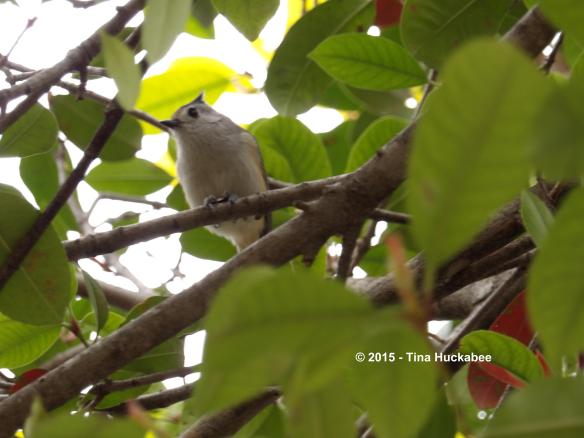 He pecks to the left,

….and pecks to the right,

…and finally, mmmmm, that seed is tasty.

I introduced this handsome dude, a Red-bellied Woodpecker, Melanerpes carolinus, in my last post.

He’s part of a couple, no doubt gearing up to raise a little family of redheads, though I don’t know where their nest is.  Not in my garden unfortunately, but he does visit.

I hope wildlife shared your gardens this month, even though winter retains its icy grip on so many places. Please join in posting about the wildlife in your gardens for March Wildlife Wednesday. Share the rare or mundane, funny or fascinating, beneficial or harmful critters you encounter. When you comment on my post, please remember to leave a link to your Wildlife Wednesday post so we can enjoy a variety of garden wildlife observations.

Let me tell you ’bout the birds and bees and the flowers and the trees….

That’ll be in your head all day. You’re welcome.

This past month, it’s really all about the birds in the gardens.    I’ve seen the occasional bee–honey–my little gals.  There are no native bees around, as they’re all hibernating, but I’ve set out logs of fallen tree limbs, some rotten, some not-so-much, so that they have plenty of choices for nesting next season. Also, there have been a few fast flying little moths and butterflies, though too fast for me to catch by camera.

And always there are squirrels.

But the birds take center stage for this February Wildlife Wednesday.  I’ve fed them. I’ve not fed them. They’re around.

The first order of business though is to correct an identification from last month’s Wildlife Wednesday. Toward the end of that post, I identified a favorite bird of mine as a Tufted Titmouse, Baeolophus bicolor, which is incorrect.  This adorable songbird (there’s probably more than one of the species) who visited in December and January and stops by still,

…is instead, a Black-crested Titmouse, Baeolophus atricristatus.  It’s a mistake that I made because that assumption thing.  Again.  The ranges of the two species overlap, so here in Central Texas, it’s possible to have both, though during the winter, the Tufted is apparently rare.  I’m fairly sure I’ve seen the Tufted in my gardens, though the titmouse(s) visiting this winter are definitely Black-crested.  Additionally, the Cornell Lab of Ornithology suggests that the Black-crested was considered a subspecies of the Tufted.  They are similar in appearance and habit, though different birds physically.  The Black-crested,

…is light grey between its black crest and its beak.  The crest is the defining physical characteristic between the two species:  on the Black-crested, the crest is very dark; on the Tufted, the crest is roughly the same color as the other grey coloring on the bird, but there is a dark spot between the beak and crest.

I made the mistake because I assumed my visitor was a Tufted, without verifying that it was.  And it wasn’t.  I hope I’ve learned my lesson: always verify.  Ahem.

One weekend morning, as I opened the blind of one of my bedroom windows, I saw something big fly by the back garden and land on a utility pole behind my property.  This beautiful Cooper’s Hawk, Accipiter cooperii, was that winged thing in the sky. 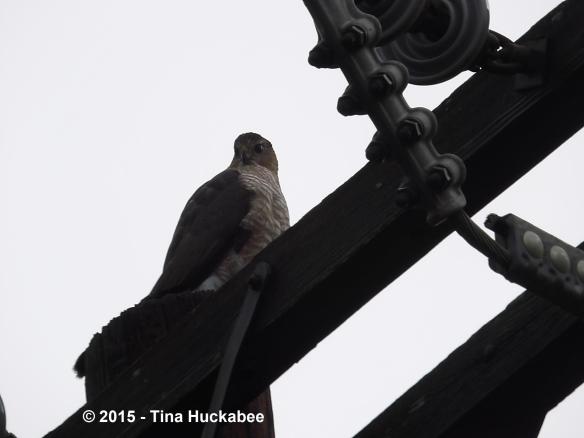 He made appearances all over the neighborhood in those couple of weeks, mid-to-late January:  a neighbor photographed him in her back garden and I’d also spotted him in yet another neighbor’s front garden sitting in a large Live Oak tree, upsetting the Blue Jays.  I haven’t seen him since, but I’ll bet he’s around.

A small band of the charming Lesser Goldfinch, Spinus psaltria, made a return visit to my gardens to finish off the remaining Goldeneye seeds. 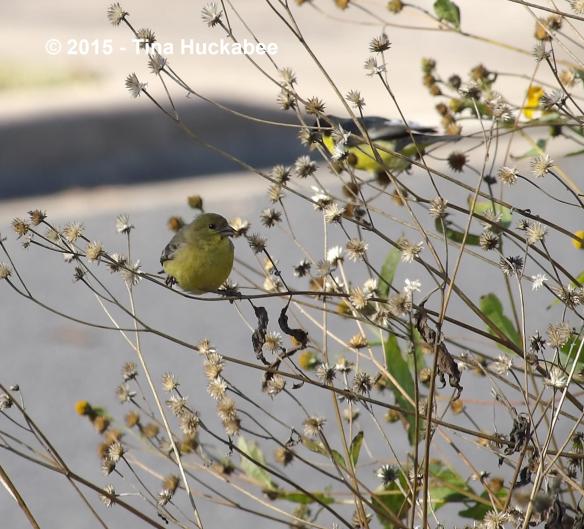 I was happy to have them back.  Their chirping is melodic and their sunny, though sometimes hard to see, plumage, is colorful in the winter garden. I like the white underwing bands of this fluttering male as he takes lunch with his partner.

The Cedar Waxwings, Bombycilla cedrorum, are beginning to make their presence known, casing the neighborhood and checking out all the available berries which they will, no doubt, gobble up all in one afternoon. 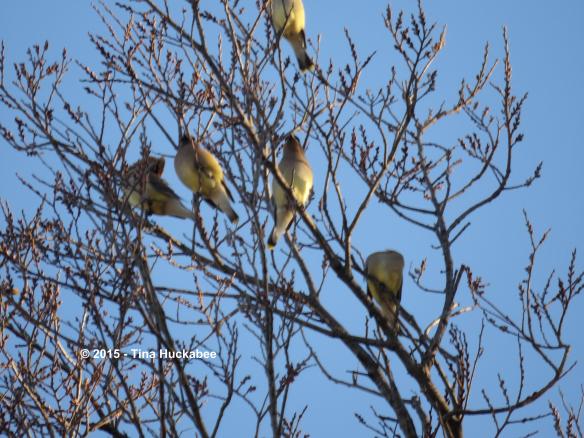 This group was at the tip-top of my back neighbor’s tree last week, sitting, grooming, generally looking gorgeous.  I love the black bands across their eyes and the yellow tips of their tails and those perfectly accented brilliant red markings, placed just so, along the wings. Cedar Waxwings are beautiful birds.

These photos are better than I thought they would be. Cedar Waxwings are the flightiest birds–one slight movement, and they’re off.  I was attempting to get the photos in a hurry (and I don’t do things very competently when I’m in a hurry, especially early in the morning before the caffeine has kicked in) because I know that those birds don’t hang around. I expect to see them again, though.  The Possumhaw Holly, Ilex decidua, is ripe for the onslaught of berry-seeking birds.

For part of January, I was in Eugene, Oregon, visiting my son who attends school at the University of Oregon (Go Ducks!). On several occasions, I walked some of the pathways of the partially restored Delta Ponds, which is now a city park.  The area was originally a river floodplain along the Willamette River, with accompanying channels and tributaries and was an important and rich wildlife habitat and flyway for migrating birds.  Once settlers commandeered the land for farming and then for urban growth and later, the building of I 105, the original environment was essentially destroyed.

Between 2004 and 2012, a restoration project was undertaken to reconnect the Willamette River and the Delta Ponds, to provide a habitat sanctuary for native species such as beaver, juvenile Chinook salmon, western pond turtle, river otter, and many migratory birds. This area, through natural management practices, has become a beautiful and educational addition to the park system in Eugene for walkers, bikers, and wildlife watchers.   I’m sure there are probably better times of the year to visit, but I saw plenty on my walks: 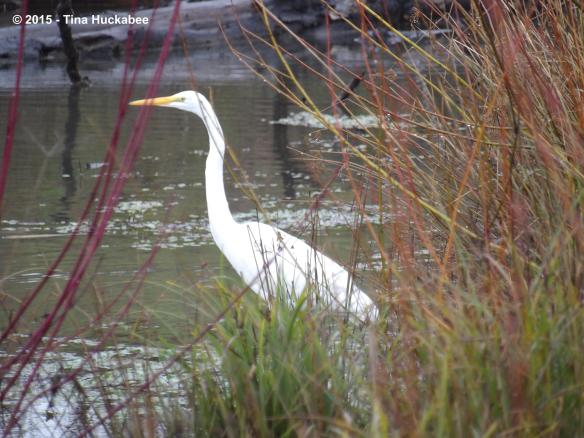 …and a female  American Robin, Turdus migratorius, who posed very graciously for me. 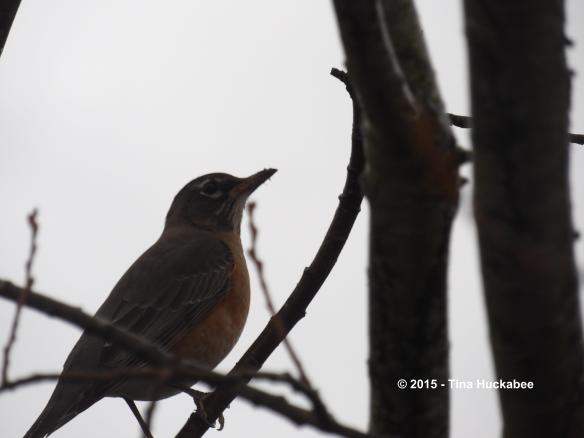 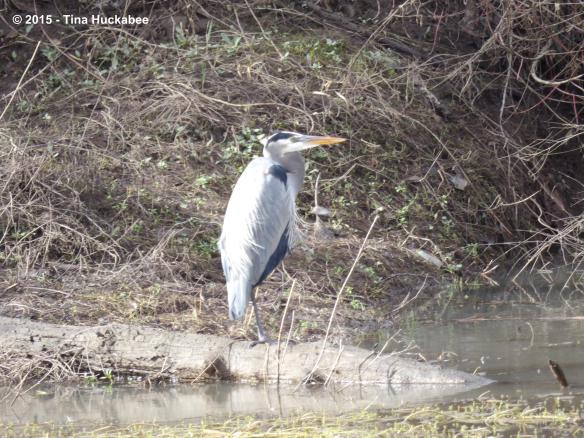 …and another who looks perturbed, but I was at a distance, so I think he was annoyed by something else.

I hope I didn’t bother him.

On other pathways in wooded areas of Eugene, this Hairy Woodpecker, Picoides villosus, pecked and flitted and was difficult to photograph.

Similarly, this Black-capped Chickadee, Poecile atricapillus, was also hard to see through the brush along the same path.

In the area known as the Valley River Center, I witnessed this Canada Goose,  Branta canadensis, along with many others of his kind, strutting jauntily, grass in bill, as if he hadn’t a care in the world. 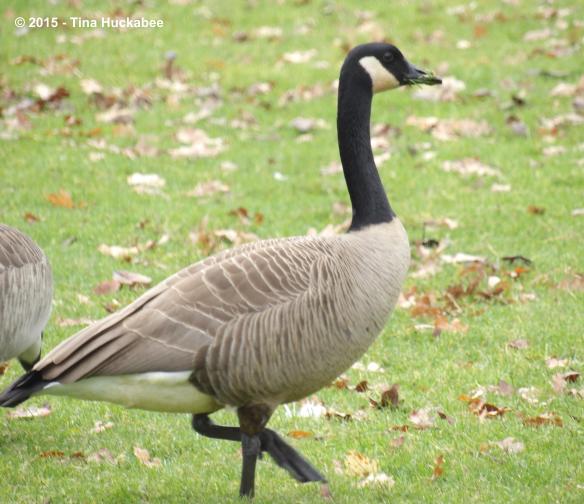 Back at Delta Ponds, there were also Mallard Ducks,  Anas platyrhynchos.         . 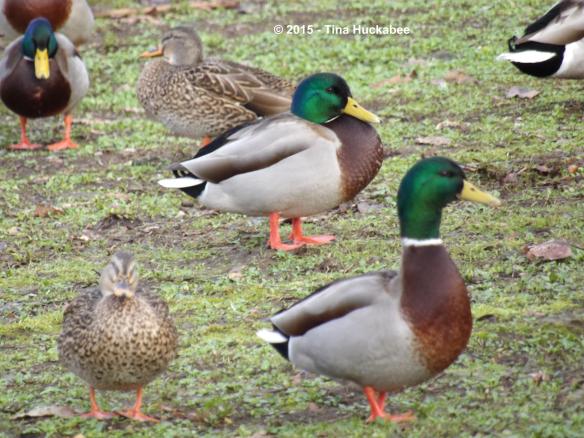 I guess the obvious thing to say here is:  Go Ducks!!

My garden enjoyed wild visitors this past month and I’m sure yours did too. Please join in posting about the wildlife in your gardens for February Wildlife Wednesday. Share the rare or mundane, funny or fascinating, beneficial or harmful critters you encounter. When you comment on my post, please remember to leave a link to your Wildlife Wednesday post so we can enjoy a variety of garden wildlife observations.