I’ve grown an unknown crinum lily for many years.  It’s a passalong from my parents’ garden and I’m certain that it was my mom who bought or was gifted this lovely thing, as flowers were the key driver to her gardening passion.  Dad liked his veggies, green shrubs, and fruit trees, but Mom was all about the blooms.

For a long time after I planted it, the crinum didn’t bloom.  Of course, I was disappointed; similar to my mom, blooms are boss in my gardening heart.  But I like the foliage and have contented myself with appreciation of its beauty.  The glossy, arching, bright green foliage emerges in spring from large bulbs and by late spring, and through the remainder of the growing season, are lush and graceful focal points in the garden.

In the last few years, the crinums’ years-long sulk over growing in a new home has ended and it has relented its stubborn non-bloom policy, adding some spring-pink to my hot July garden.  The bloom stalks appear, seemingly overnight and I never notice the soon-to-be blooms until shortly before they open up.

The buds tease, at first pointing deep pink toward the summer sky, eventually weighing heavily enough to gently bend their stems in a bow.  The petal tips purse for a kiss, the flowers take time to reveal themselves in full.  But within a day or so, the bell-shaped beauties unlock, curl outward, and soft pink opens itself to the world.

While not a strong attractor of pollinators, I’ve seen a few carpenter bees nose around the inner workings of the flowers; I don’t know if their interest was rewarded with any treats of pollen or nectar.   I typically like my plants to feed something, to serve a purpose more than beauty.  But if the crinums’ role are limited to being pretty faces in the garden, with no real offering of sustenance, I’m fine with that.

I’m rewarded in early-to-mid summer with these charming flowers and for most of the year with the foliage of this tough and attractive plant.

Thanks Mom and Dad–for your flowers and your love.

Clear blue skies dotted with drifts of puffy clouds, warm south breezes creating shadow puppetry underneath leafy trees, and the onslaught of truly toasty temperatures are all reminders that summer has settled in.  This is a relatively mild summer compared to some of recent years and one benefiting from plenty of rain in May and June.  The humidity is high and skin is sticky, hats are worn, sunscreen applied, mosquitoes are slapped, water taken, and air conditioning is always appreciated:  it’s hot July in Central Texas.

As well, the garden is lush, with blooming action to satisfy pollinators and gardeners.

My Retama tree, Parkinsonia aculeata, has bloomed non-stop since May.   The flowers are borne in clusters and bees buzz all around.

Petals are sunny summer yellow, except for one with a honey gland which turns the petal orange-red.

Retama are native to the southern and western states of the U.S., but have proven invasive in other parts of the world.  My tree is about 15 years old and beginning to decline.  It’s only produced a couple of viable seedlings in my garden, one of which is now about 3 feet tall.

I’m quite fond of Tasmanian flax lily, Dianella tasmanica, ‘Variegata’.  I originally planted several individuals for their fun foliage and brightening impact in my shady back garden.  My garden also wanted some structural detail and I’m not a fan of spiky plants,  so softer grasses and grass-like plants appeal.   Plus, flax lily stands strong against our hot, typically dry summers. 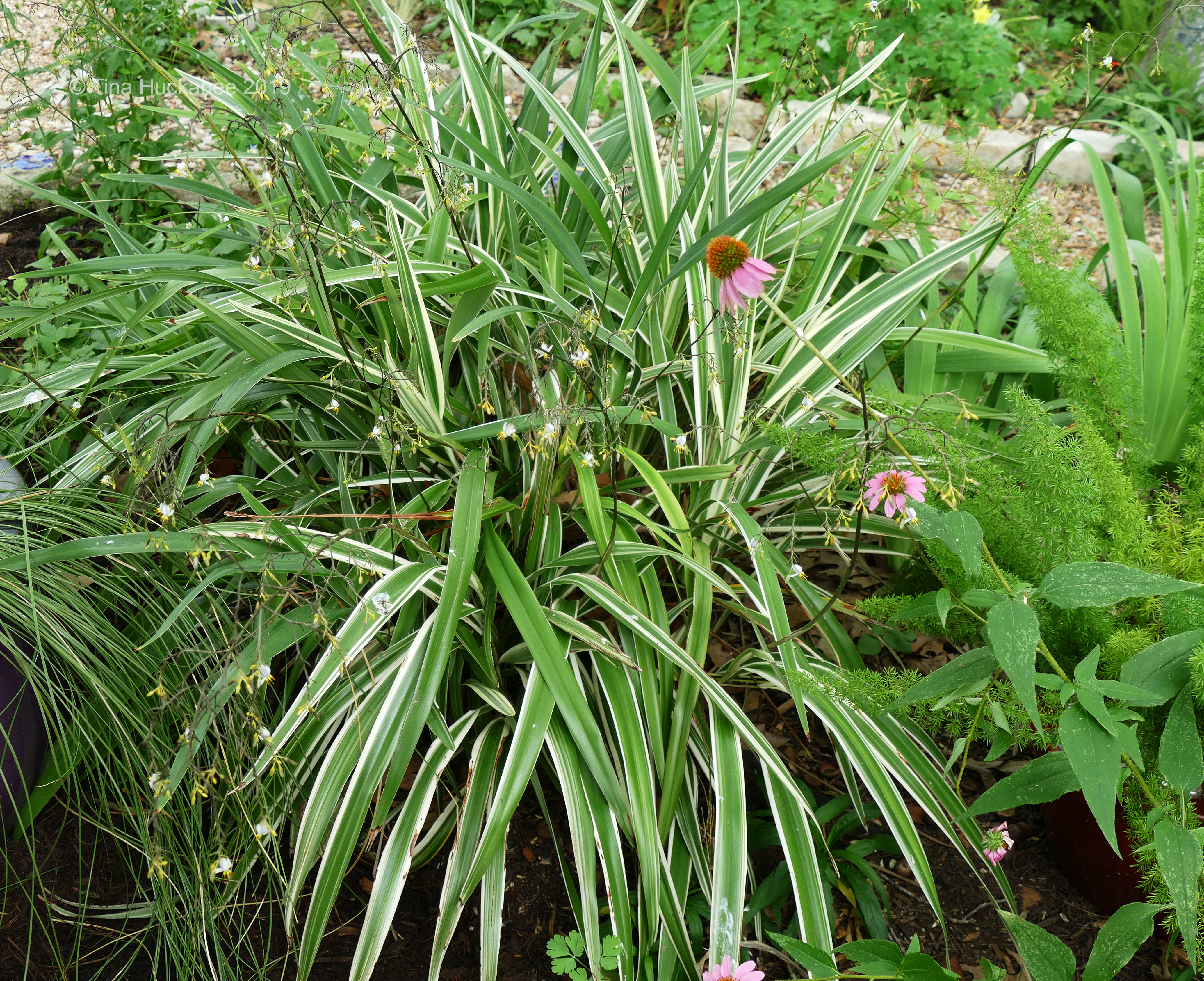 While Flax lily are noted for foliage they do produce blooms.  The slender, slightly arching bloom stalks are graceful and the petite flowers are shooting-star enchanting.  They last for quite a long while.

I recall seeing some small native bees and flies around the blooms last summer, but haven’t spied such things this year.   This flower looks like it’s ready for a pollinator pal.

Some years ago, I was given a tiny seedling of a Mexican orchid tree, Bauhina mexicana.  It was early autumn and I dutifully planted, watered, and mulched  the baby tree.  After a cold winter with a number of hard freezes, I assumed that the seedling orchid tree was probably a goner.  However, it returned and now, a decade (or so) later, it returns each spring after winter freezes, and in mild winters, remains evergreen.  This little tree blossoms on and off through the long growing season.

With a rangy, shrub-like growing habit, my original specimen sports pure white flowers.  A favorite flower among the pollinator crowd, the larger swallowtail butterflies are enamored with the gorgeous orchid-like blooms.

The original has bequeathed several seedlings, some of which I’ve given to gardening buddies, but one I kept and planted in my front garden and it’s flourished.  The blooms on this tree are tinged pink, rather than the pure white of its parent.  In the photo below, check out the smeary green metallic bee (left side) heading with determination for a taste of Mexican orchid nectar. 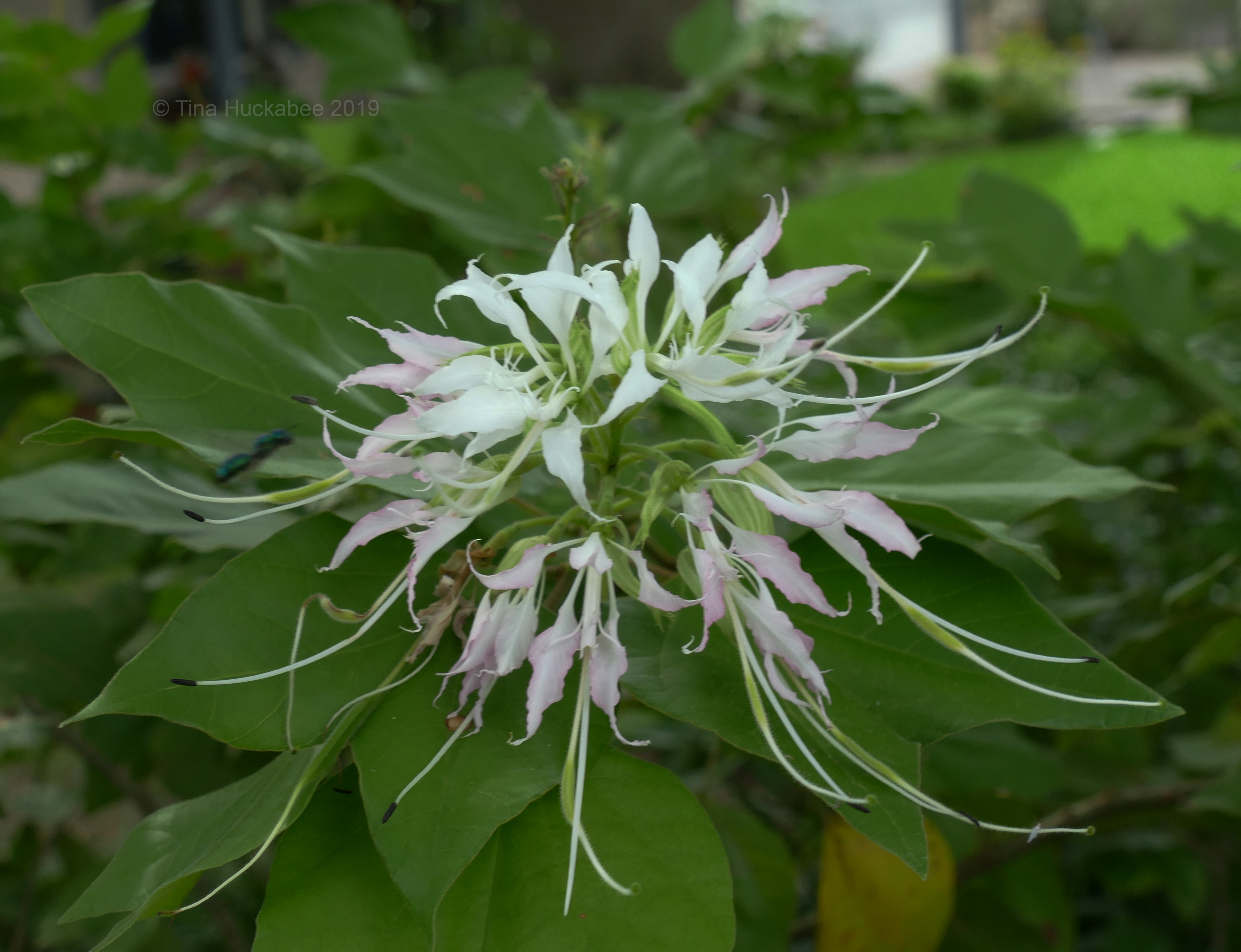 Nothing says summer like sunflowers!  I feed my urban bird visitors black-oiled sunflower seed year-round and each spring dozens of individual sunflowers germinate from those very seeds.  I cull most of the seedlings, but allow some to stay.   They always grow tall, but with this year’s rain, they’ve grown Jack-in-the-beanstalk giant.

It’s not a difficult task to find someone feeding on these happy flowers almost anytime of the day. 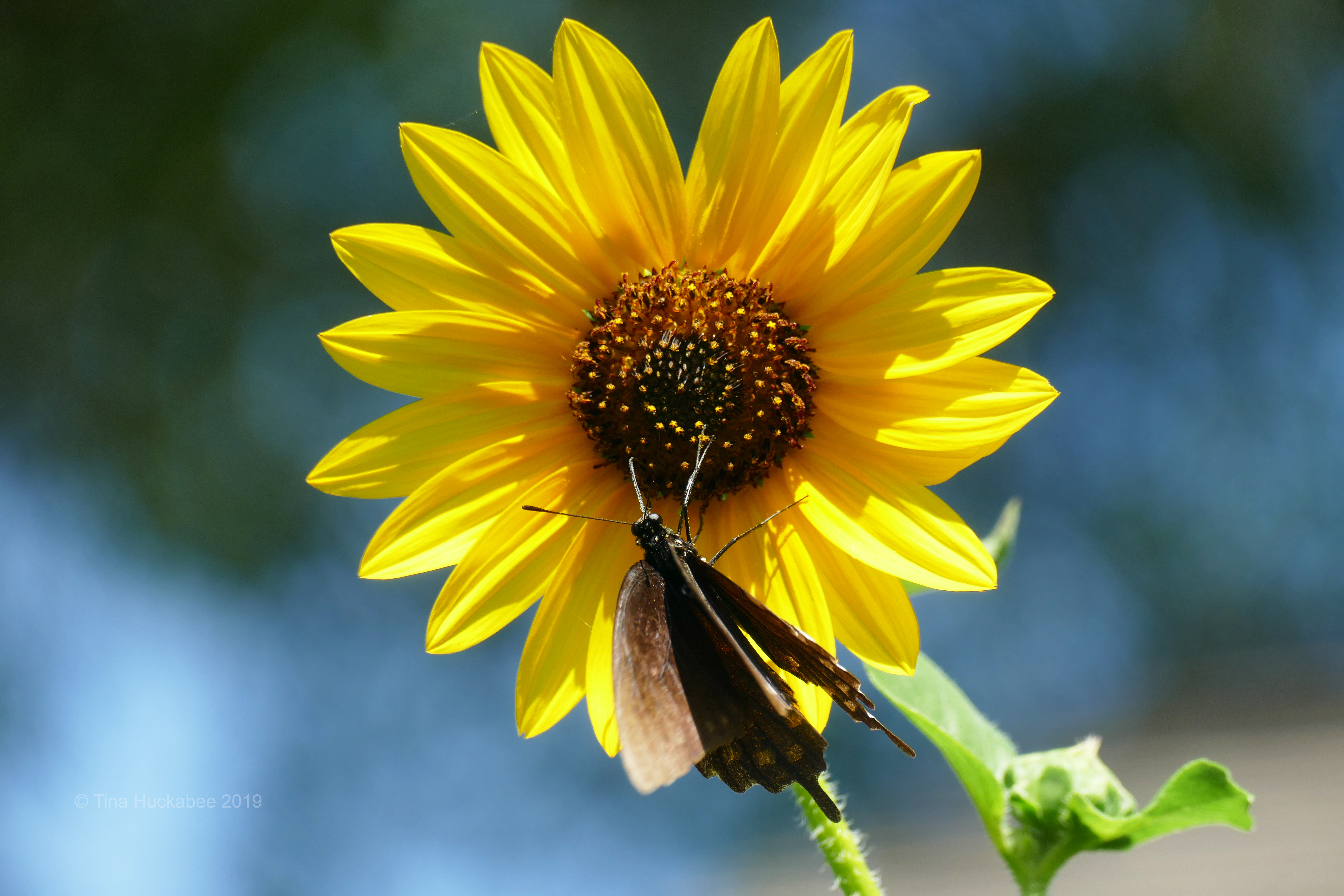 As the flowers fade and seeds replace blooms, House and Lesser goldfinches (and other birds, too) become feeders-in-residence on the tall annuals.

My pond gurgles and flows in increasing shade each year.  The water isn’t impacted by the shady situation, but the pond flowers bloom less, though still manage some lovely and welcome flowers.  These pink pretties are waterlily Nymphaea ‘Colorado’.  Soft pink petals paired with golden centers, the flowers float among fish and fins and lily-pad foliage.

A pond colleague, Pickerel rush, Pontederia cordata, sits in the bog section of the pond.

In contrast with the lily flower floaters and their spider-like spread of leaves, Pickerel rush is upright in both floral and foliage form.

If this were March rather than July, the Yellow columbine, Aquilegia chrysantha,  would be a resounding choice as a main garden bloomer.  But this is the first year EVER that I’ve seen columbine bloom in my garden through June and into July.  These summer columbine blooms came from one particular columbine plant and the blooms certainly weren’t as prolific as they are in the spring, but the individual columbine shrub flowered until about a week ago.  Of course I’m not complaining about the summer appearance of a typical spring bloom, I’m just baffled at this bit of serendipity and have assigned credit for the bonus blooms to our rainy June.

The columbines are done for the year, I believe, but I enjoyed their long bloom cycle in 2019.  I’d love it if this summer’s blooming business signals a trend, but I’ll be surprised if the summer columbines make an appearance next year.

My mother was a gardener who planted.  She didn’t particularly care about color or form or name of plant–she just like plants and especially flowering plants.  My parents gardened near the Gulf of Mexico and in their garden grew this crinum lily.

Long ago, before they both died, they gave me a number of bulbs which I planted in my own back garden.  I don’t know the crinum’s name, nor do I know from where it originally hails.  Blooms from this lovely lily have been rare treats in my garden; usually, it’s one stalk per year in mid-summer and that’s it.  Most years, no blooms appear and I’ve long contented myself with the crinum serving as a nice foliage perennial, rather than anything of a floral nature.  This summer–again, it’s the rain–all of my established crinum plants have bloomed and each with several bloom stalks.  What a treat it’s been!

Conversely, the Texas native Turkscap, Malvaviscus arboreus var. drummondii, is normally a powerhouse bloomer in the summer. Not so this summer.  Thanks, rain!

Turks are wonderfully drought tolerant and prefer to live and bloom in dry, shady conditions and my garden supplies plenty of that.  The summer started wet and lots of foliage grew, but not as many blooms popped on the plants–including Turkscap–which prefer arid conditions.  As we’re now in a more normal dry summer pattern, the crimson hibiscus-like flowers are making up for lost time. 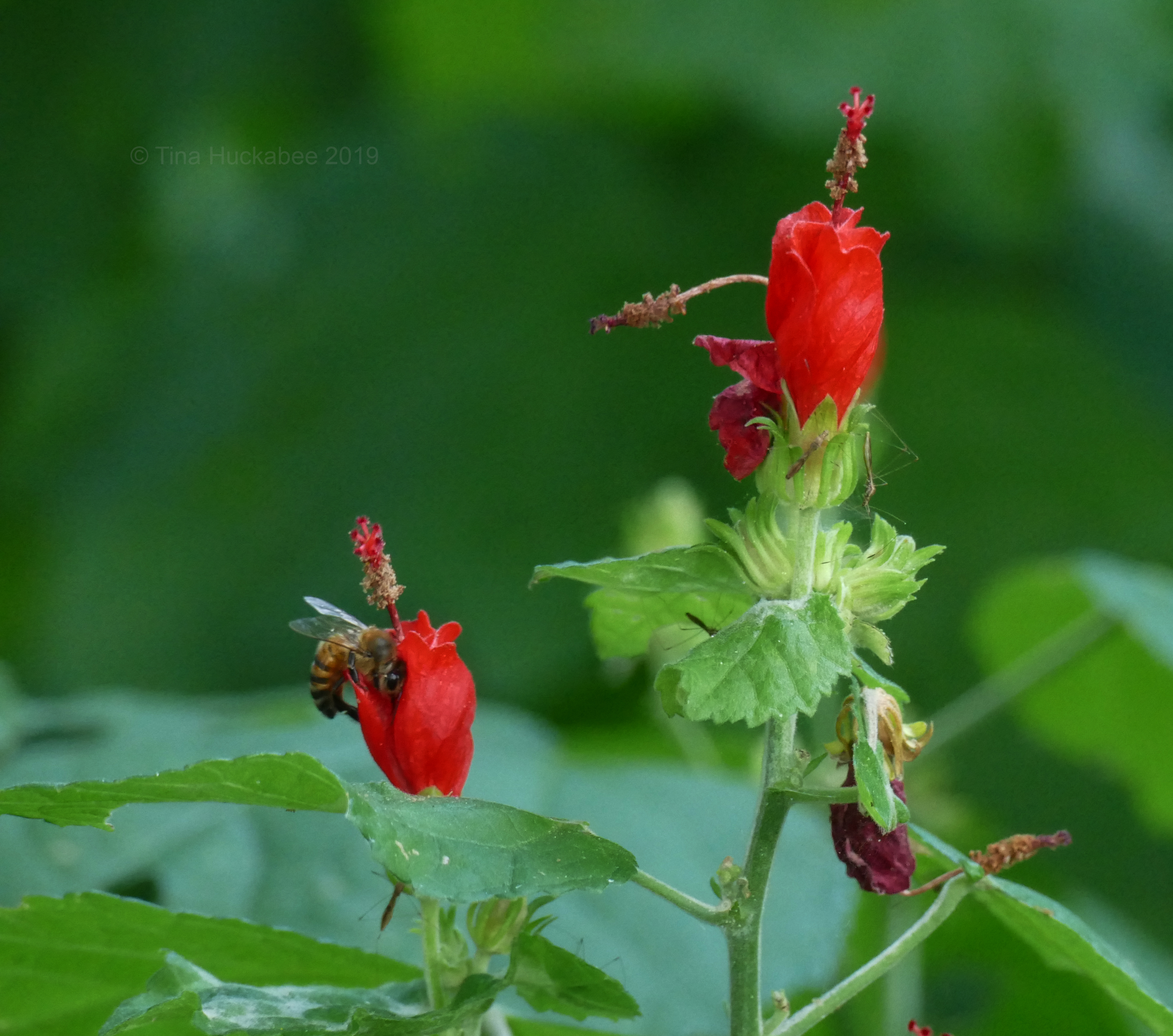 The little honeybee accommodated my photo by flying in and nectaring at just the right moment.

Another summer bloomer grown in Central Texas is the Pride of Barbados, Caesalpinia pulcherrima.  It’s an eye-popping plant with shocking orange and yellow flowers, along with dramatic red stamens.  It’s hard to ignore and why would you want to?

A popular landscape plant,  this prolific bloomer is root hardy here in Austin, but evergreen in the southern parts of the state.  Pride of Barbados is also a pollinator magnet; bees, butterflies, and hummingbirds all spend time working the blooms’ bounties.

I only have one spot that comes near to providing enough light for this sun lover and even there, my specimen is, quite frankly, a little lame.   In the right conditions–full, blasting sun–these herbaceous perennials can easily grow 5 feet wide and 6-8 feet tall.  They are drama queen plants!

July in Austin is a mixed-bag:  blue skies are full of cheer and hope, but hot temperatures wear thin over the long days.  There’s plenty in the garden worth celebrating though and I hope your July garden is providing a good flower and foliage show too.