As summer muddles along here in Central Texas with fairly typical heat and humidity, this gardener slows down. Even so, I can’t resist the daily pull of the garden, even in mid-afternoon heat: too much action, life, and beauty greet my visits and I don’t want to miss it any of it.  Local wildlife isn’t bothered one bit by the long, sunny days–if water is available.  True to form, my mid-to-late summer garden provides good wildlife watching.

During spring and autumn bird migration, I’ll slice fruit and affix the pieces to a fence for the weary, hungry and thirsty birds.   While spring migratory season is over and fall migration has yet to begin, some extra oranges found their way to my kitchen and I wanted to share them with, ahem, the birds.

This rascal isn’t a bird, but I’ll bet you knew that already. 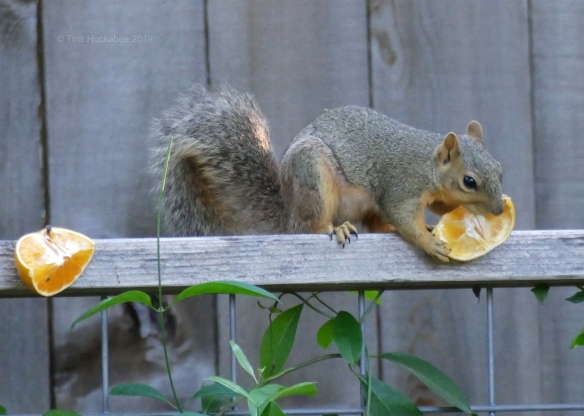 This Fan of the Orange is an Eastern Fox Squirrel, Sciurus niger.  Many types of birds and mammals enjoy fruit, and if you grow–or attempt to grow–fruit trees, this won’t be news to you.  While my orange offers were targeted for birds, I don’t mind (too much) that the squirrel devoured the juicy fruit.

Green anoles, Anolis carolinensis, are active for most of the year, except for the deep of winter.  In summer, it’s rare that I’m in my garden that I don’t see at least one of these garden cuties.  I like the way this one drapes its claw over the leaf edge of the Twist-leaf yucca, Yucca rupicola. The lizard looks like it’s in total command of the situation.  I  expect the anole to don a pair of shades or a hip hat, and sip from an adult-lizard beverage of choice. 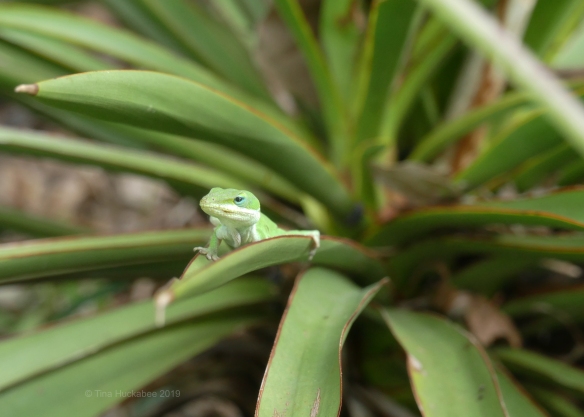 Nature’s life and death dramas play all the time in my garden.  Oregano blooms, favored by a variety of pollinators, make good perches for garden predators and Milkweed Assasin bugs, Zelus longipes, commonly hang out on the oregano and hunt.   This assasin had the poor honeybee firmly vised. 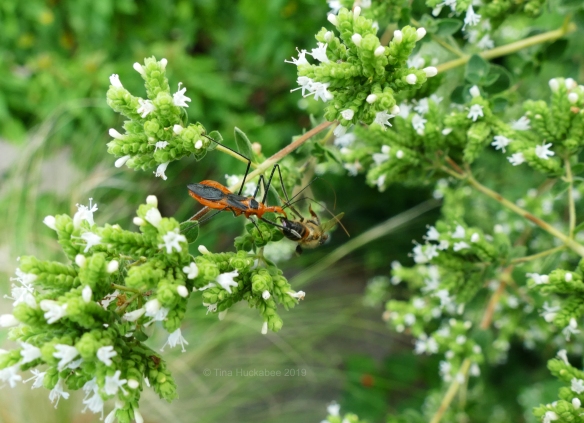 A closer look at the assassination. 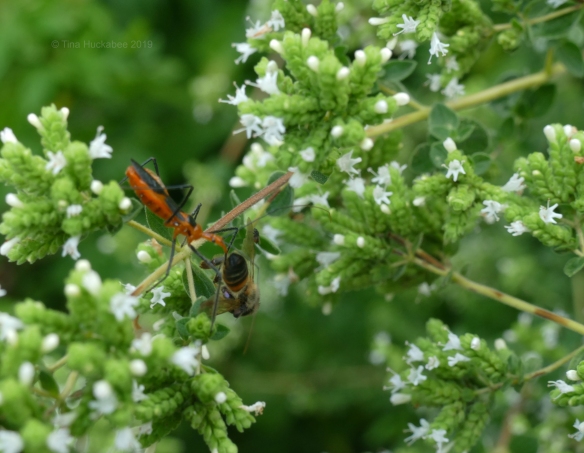 Excepting a surfeit of predators (which I’ve never seen), I let pollinators and predators go about their business–no matter the outcome.   In nature, it’s all about balance.

This has been the Summer of the Bordered Patch butterfly, Chlosyne lacinia.  Several generations hatched, morphed in caterpillar stages, and then flitted through the garden as adults.  I grow plenty of sunflower types and those plants have nurtured a boon of butterflies, which have been pops of moving color in both larval and adult stages. 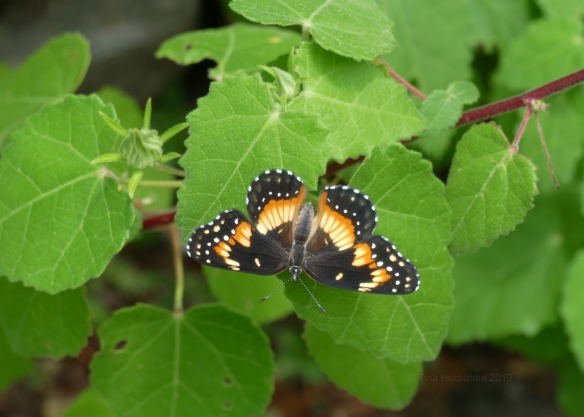 To encourage butterflies in your garden, tolerance for munched leaves is a must. Butterflies and moths lay their eggs on host plants.  Then larvae hatch and eat the foliage of those plants.  The foliage isn’t pristine during the caterpillar progressive meals, but once the eating frenzy is finished and the cats are sequestered in their cocoons, the foliage recovers. A common fallacy is that there is something wrong with foliage that has been eaten, and that the offending insects must be destroyed.  But insects and plants evolved together and share synchronistic relationships:  plants are required for healthy insect populations and insects utilizing their host plants for food eat only what they need for their next stage of development and generally won’t eat foliage to the detriment of plants–nature just doesn’t work that way.  Plants usually rebound to provide for the next generation of pollinators.   As for problematic, invasive insects (for example, aphids and red spider mites), a few blasts of water will usually take care of them.

Big, beautiful Southern Carpenter bees, Xylocopa micans, usually show up in mid-summer and this year a couple arrived on cue.  I like this bum-shot of the bodacious bee. 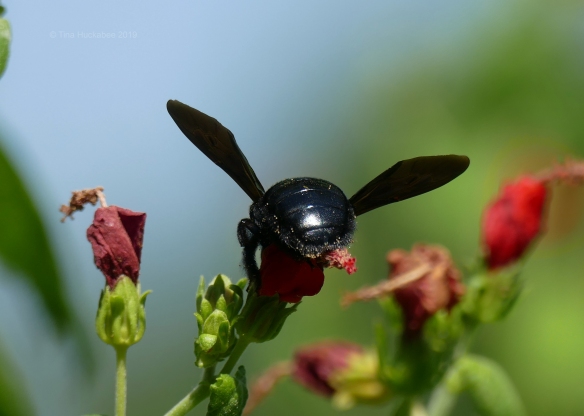 No, it doesn’t have a red tail issuing from its backside, but instead, the bee is perched over the flower, its proboscis (unseen) thrust into the base of the plant, slurping nectar.  This activity is known as nectar stealing or robbing and, at first glance, doesn’t appear to aid pollination.  The thief either eats a hole into the tissue of the flower, or exploits a hole already in existence, then–proboscis engaged–sips away, bypassing the more typical pollination process.

When pollinators land on flowers and drink from the center of the flower where the reproductive parts are located, it’s a mutually beneficial relationship:  the pollinator gets nectar, the plant is pollinated and reproduction happens.  So is nectar robbing actually theft and is pollination averted?  Maybe not, as the insect (or other pollinator), land on the bloom in such a way that its various body parts make contact with the reproductive parts of the flower.  After nectar robbing from one flower while lying all over that flower, the bee then flies to other flowers.  With pollen grains attached to the bee’s abdomen, legs, and parts unknown, grains are deposited on the following flowers and pollination is achieved.

These gorgeous bees are so large that when one buzzes by me, I feel a slight whoosh in the air!  I’ve seen them at different plants, but in my garden they prefer Turkscap, Malvaviscus arboreus.

Addendum:  I thought this bee was probably a Southern Carpenter, but for good measure, before I published, I sent an identification request to BugGuide.net.  The first response I received was, I believe, incorrect as it suggested the bee was a species from California.  That would be hard as the bee and I reside in Texas.  However, I’ve since received a second identification (Friday August 9) suggesting that this bee is a Large Carpenter bee,  Xylocopa mexicanorum.

So…welcome to the wonderful world of insect identification! 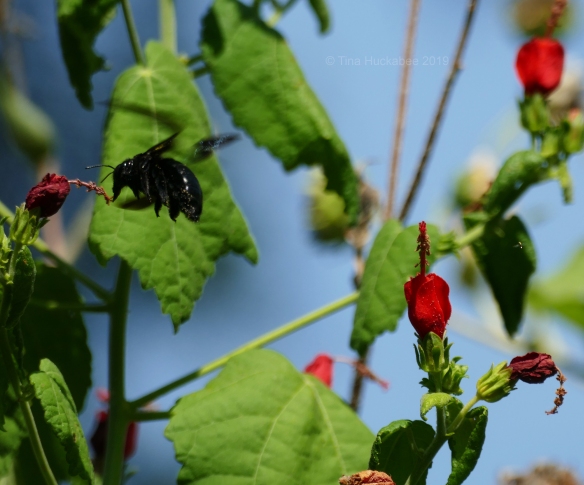 So what’s in your garden as summer plods along?  Please post about your garden critters and leave a link  to your post when you comment here and happy wildlife gardening! 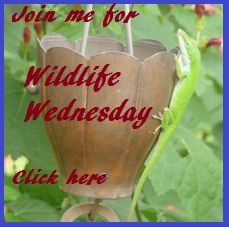