As spring bird migration swings through Texas, I’ve spent a fair few evenings on my back patio, with cell phone, binoculars, and camera all at the ready.  The cell phone is my link to Merlin, Cornell Lab of Ornithology’s bird identification app for phones; the binoculars help me with those close-up views of tiny, flighty birds;  the camera is handy, utilized in the hope of a decent photo of something, preferably a something with feathers.

I was about to wrap the watching up one evening, not too long before sundown and after an evening’s birding bust, when this fella slinked out from the limestone rocks which are dry-stacked around the waterfall of my pond. 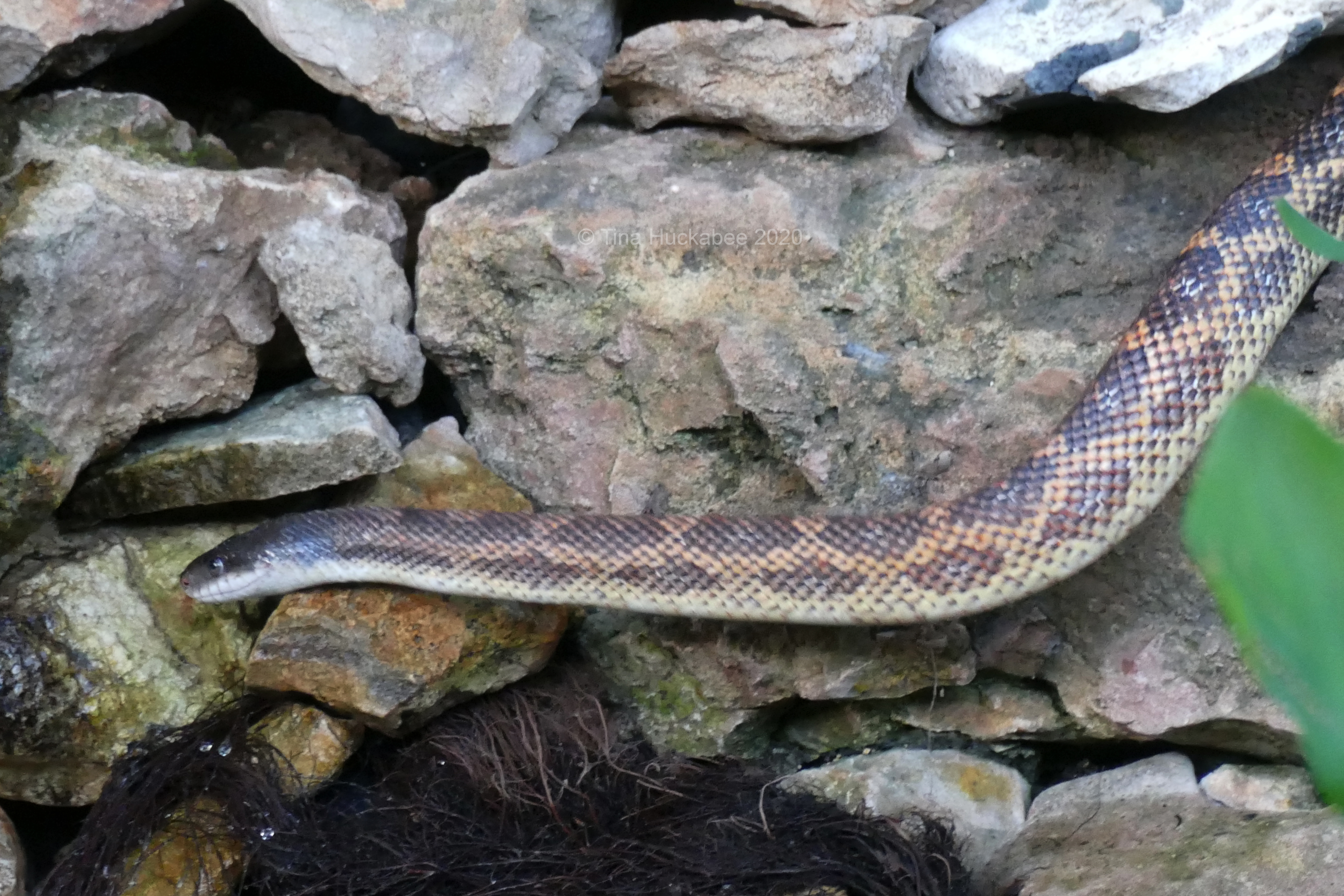 This slivery thing is the neighborhood’s resident Texas Rat snake, Elaphe obsoleta lindheimeri.  Yes, it’s still around and for this particular appearance, didn’t annoy the Blue Jays, as it did when I last saw it, which you can read about here.

I was quite shocked at the snake’s arrival and bumbled as I grabbed my camera; I managed only one decent shot of this lovely creature.  After a sip near the waterfall, and a languid look-see, it lifted its head and with the rest of its long body following, gracefully moved up and over and into the cavern that the piled rocks have created.

Named after one of its prey, Rat snakes also eat bird eggs and birds, especially chicks still in their nests.  I imagine Rat snakes will eat anything smaller than themselves.  I haven’t seen the snake since, nor have I removed the rocks to check if he/she is curled up, hidden from others’ eyes. I doubt the snake is there, as I’m pretty sure it was just a stop-over resting spot, supplying water and maybe, a meal.  Also, if the snake was still there, the Blue Jays would have, by now and vociferously, announced its presence.  There are toads in and around the pond, so rather than snagging a warbler for a meal, I’ll bet it was hunting toad.  Funnily enough, I’ve always fretted, just a little, about a mouse or rat setting up housekeeping under those rocks.  I guess I can now scratch that concern off my list.

As to warbler watching, that evening hobby has ended: the warblers are apparently winging through Texas on a different path, or set of paths, and avoiding my garden.  It’s been well over a week since my last warbler sighting.  I know migratory birds are still observed in Texas, evidenced by birders posting on Facebook’s Birds of Texas group, chronicling the birds’ northward travels to find their mates and create their families.

I’m joining in today with Anna and her Wednesday Vignette.  Sometimes the vignettes are about gardening, sometimes not, but they’re always fun.