Skip to primary content
With thanks to Kurt Weill and Maxwell Anderson for this lovely bit of poetry and to
Sarah Vaughn and Willie Nelson (as a fellow Texan, I must include his version) for interpreting the words so beautifully.
Oh, it’s a long, long while
from May to December,
But the days grow short
when you reach September.
Indeed the days have grown noticeably shorter–not cooler, though.  The cool will come, as will the wet, but patience here in Central Texas for those particular autumnal qualities is still the order of business as heat lingers and summer blooms continue, though autumn is arrived.

Toward the end of its summer show, at least in my garden, is Pride of Barbados, Caesalpinia pulcherrima. I’ve certainly enjoyed the brash and bold blooms these past couple of months, as have a variety of pollinators.  Honeybees, several species of native bees, butterflies, moths, and wasps all partake of these gorgeous hot beauties.  In spots around town where this riot of orange and yellow grow in full sun, the plants remain in full blooming mode.  Mine has blooms, but fewer each week. On a subdued side of the garden is sweet little Pigeonberry, Rivina humilis.   A small, tough native ground cover, its blooming begins mid-summer and lasts until chill sets in–whenever that may be. 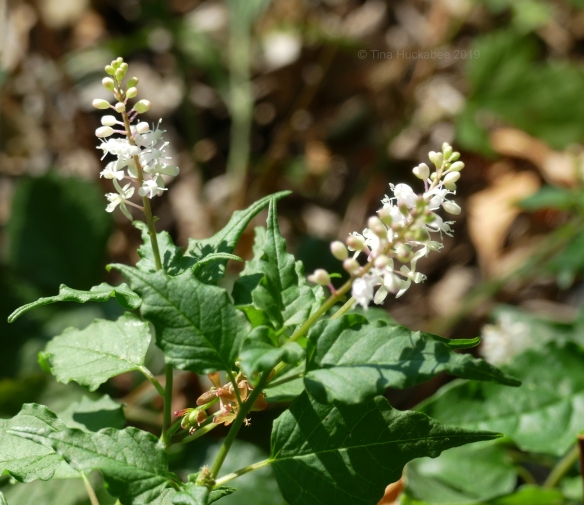 This particular plant has tiny white flowerets on small bloom stalks, but typically,  Pigeonberry blooms are pink.   In the shot below the flowers, spent flowers, and ripe, red berries all share space.  An extra pretty feature of this plant are its ruffly leaves–swoon! 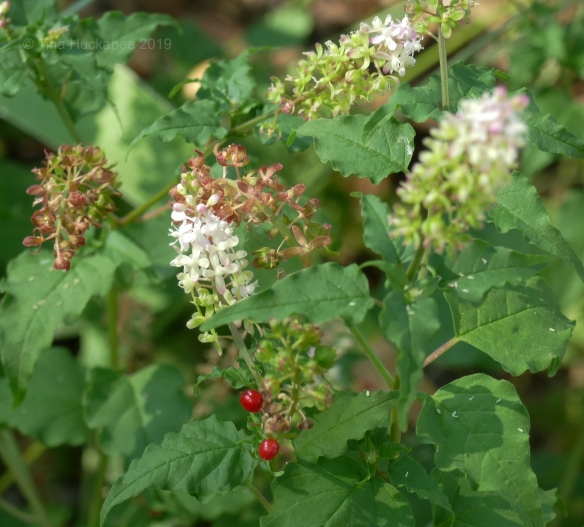 In October and November, there will be fewer flowers and more berries. And yes, pigeons do eat the berries, as do doves and blue jays.

Dainty comes to my mind when I look at Pigeonberry. 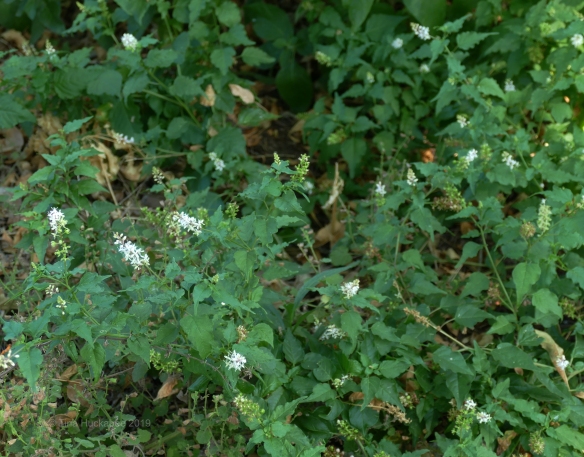 My mature individual Red Yucca, Hesperaloe parviflora usually send up four to eight bloom stalks, each about 5 feet high.   In the past, I’ve noticed that heavy rain during that brief window of time when the bloom stalks make their appearance limit both the number and sizes of the stalks. Just that kind of rain pattern was in place this past spring at that particular time and as a result, every Red yucca I grow sent up one–and only one–stalk.  All were shorter than normal. I’ve missed the drama of multiple stalks decorated at their terminal ends with lovely salmon-n-gold blooms, but each individual stalk fulfilled its duty and produced flowers all summer.

This is one of the last of the season, in full pinky glory and accepting visits from hummingbirds and other pollinators. 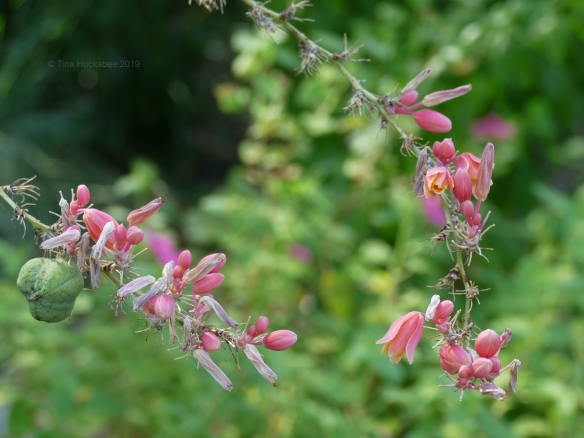 It took a long while before I found the right spot in my garden for a Firebush, Hamelia patens.  Poor thing, I must have transplanted it at least four times.  A sun-lover, this plant is happiest where it’s hottest and sunniest. 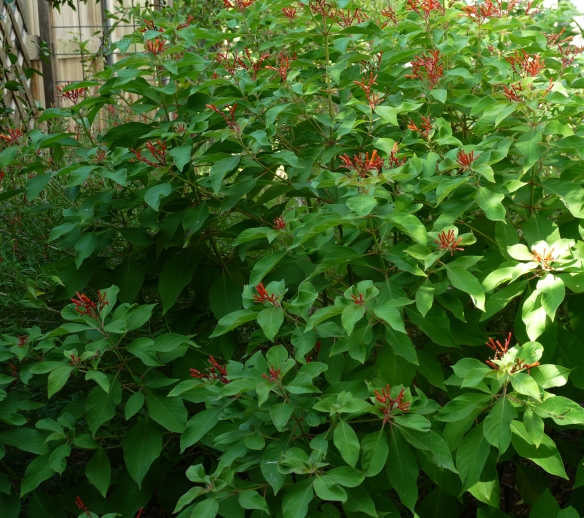 That one best Firebush spot is located at the side of my house, in a narrow strip that no one visits or sees, except for the pollinators and myself.   The tubular flowers are red, tinged orange, and borne in terminal clusters. 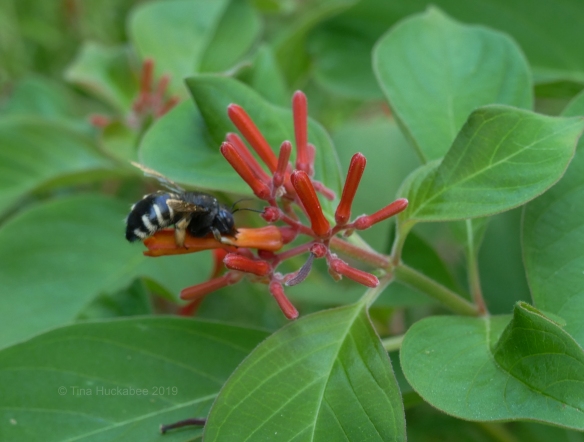 The occasional predator also hangs out, waiting for a meal, looking cute all the while. 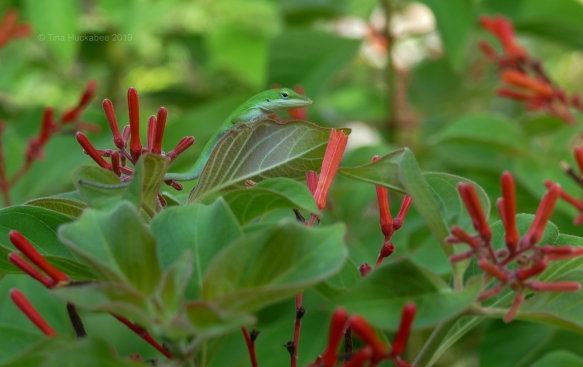 Here you see the Hamelia paired with another hardy heat-lover, Flame Acanthus, Anisacanthus quadrifidus var. wrightii, situated at the far left and toward the back of the photo.  Both of these plants are native to Texas. I wish my garden supported a better stage to showcase both the Firebush and the Flame Acanthus because they’re gorgeous summer-to-autumn bloomers,  water-wise shrubs, and good sources of food and cover for a variety of critters.

Like the Firebush, Flame Acanthus sports tubular blooms, but grows from a woodier shrub and is accented with small, slender leaves.    Its white bark is attractive, especially after a hard freeze with resulting dropped foliage.  It’s a winning garden addition year-round. 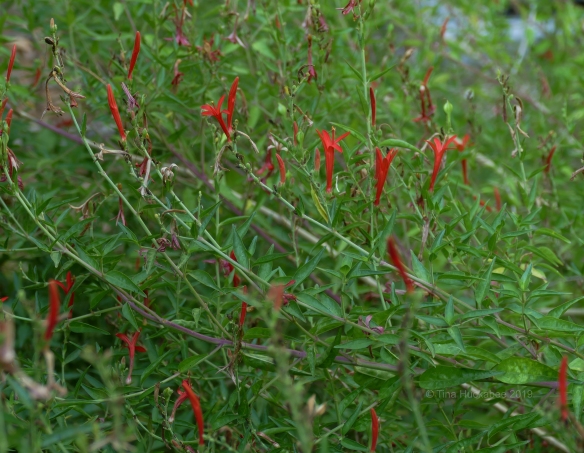 You can bet that hummingbirds make a bee-line for these blooms, too. 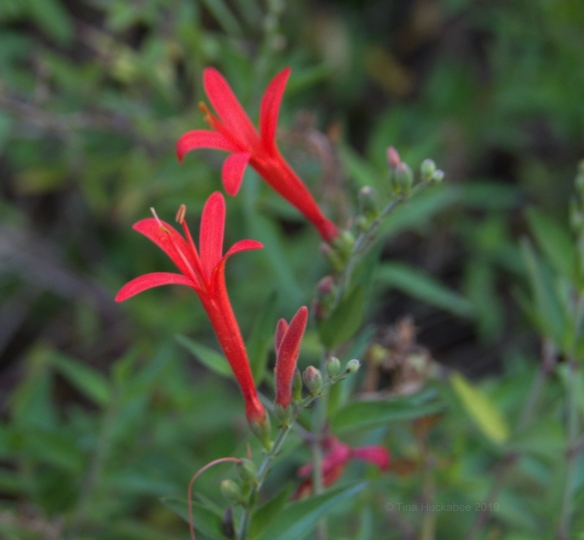 Dwarf Mexican Petunia, Ruellia brittoniana ‘Katie’ is yet another hot weather bloomer, most years flowering from July to October.  A tidy little plant and perfect for the front of a border, the flowers present themselves as a bouquet.  While not evergreen, the plant only dies to the ground during very hard or prolonged freezes; in our milder winters, the foliage remains.  The foliage is dark green and graceful, complementing the rich purple flowers.  In the photo, The ‘Katie’s’ striped companion is foliage from Variegated Flax Lily, Dianella tasmanica ‘Variegata’. 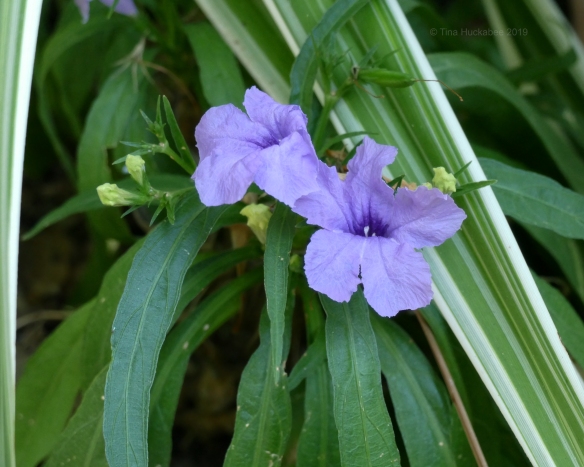 Can’t you just imagine a bride hold this as she marries her beloved?

Another ruellia in my garden is one in which I hold mixed feelings for.  The Pink Ruellia, Ruellia brittoniana ‘Chi Chi’ is another easy-to-grow, hardy plant flowering during our most difficult time of the year and I appreciate that. The blooms are obviously similar to the ‘Katie’s’ Dwarf Ruellia, color notwithstanding.  The foliage is similar, too, but the plant is much taller.  This year, the ‘Chi Chi’ have grown nearly four feet high due to the heavy, prolonged rain of the spring months.  Pollinators, especially bees, visit the flowers constantly, making the it one of the better pollinator plants in my garden during August and September. 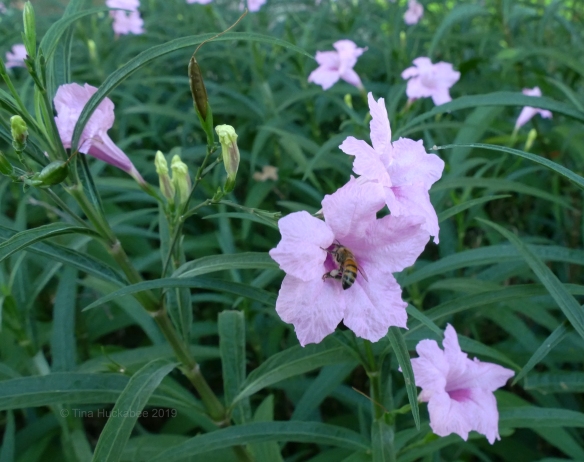 But ‘Chi Chi’ is invasive and I must keep the two groups of this plant in check, otherwise ‘Chi Chi’ would run rampant.  I don’t find seedlings all over the place, but they pop up close to where the main groups grow and ‘Chi Chi’ desires insidious expansion of boundaries.

Nope, not gonna happen, Ms. Chi Chi.  But you are pretty, I’ll give you that and I’ll keep you around as long as I can exercise a modicum of control over you. 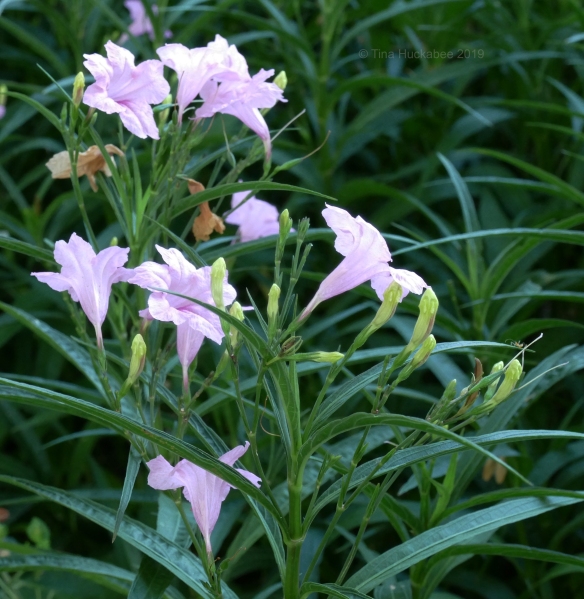 Leadwort Plumbago, Ceratostigma plumbaginoides, is a meandering cutey that I forget about, until those sky-blue flowers grab my attention. Leadwort plumbago, with cheery blooms and lush foliage, hugs the ground closely and wends its way around other perennials.  This plant would probably like more sun, but nevertheless blooms during the latter part of summer and that’s why I grow it.

I once thought that, while the flowers were pretty, they didn’t attract any pollinators.  Happily, I’ve discovered otherwise!  I wasn’t fast enough with the camera, but just as I took this shot, a tiny native bee zoomed off from its mucking around in the middle of the bloom.  I like plants which serve a purpose other than pleasing me. 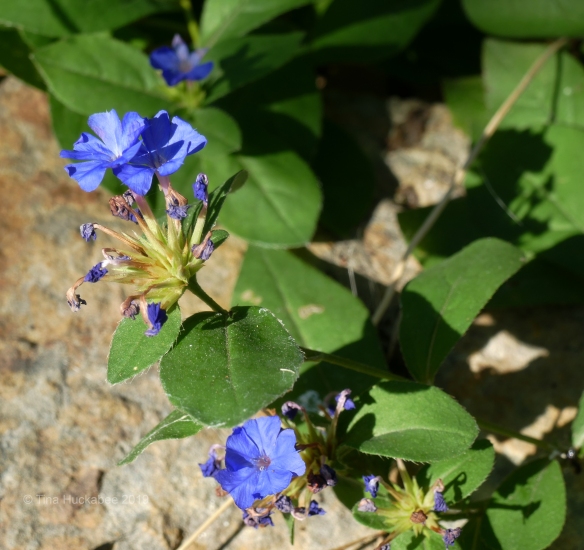 The next two plants I profiled in previous Monthly Blooms posts, but are well worth another visit as they’re still blooming, still providing for wildlife, and still making the garden a good place to be.  The Turk’s cap, Malvaviscus arboreus var. drummondii,  is chock full of hibiscus-like crimson blooms. 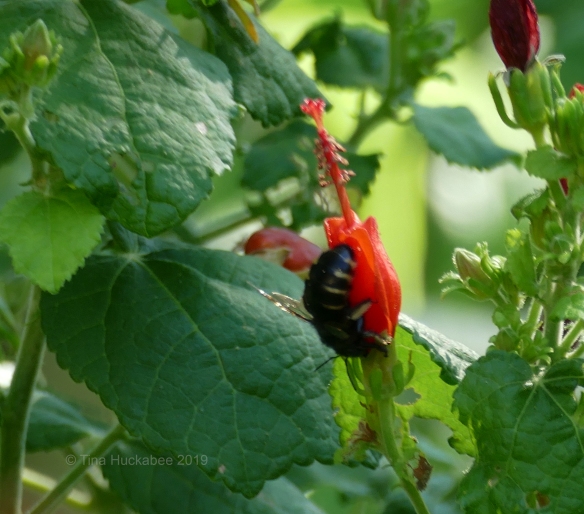 As the season heads the end of its blooming time, Turk’s cap flowers share space with developing fruits, adored by a variety of birds like Blue Jays and Mockingbirds. 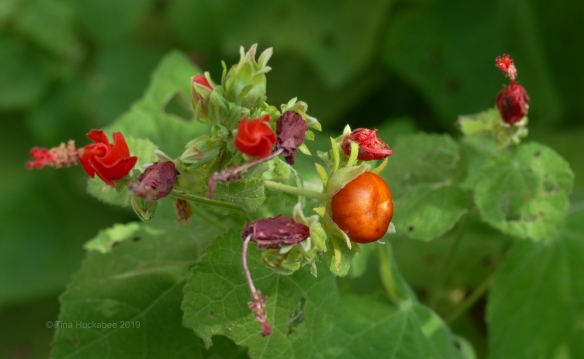 The Branched Foldwing, Dicliptera brachiata started blooming last month, but has hit its stride in September.  Sprinkled all over the diminutive shrub are elegant lavender beauties.  It’s not a showy plant and the flowers require a close-up for full appreciation. 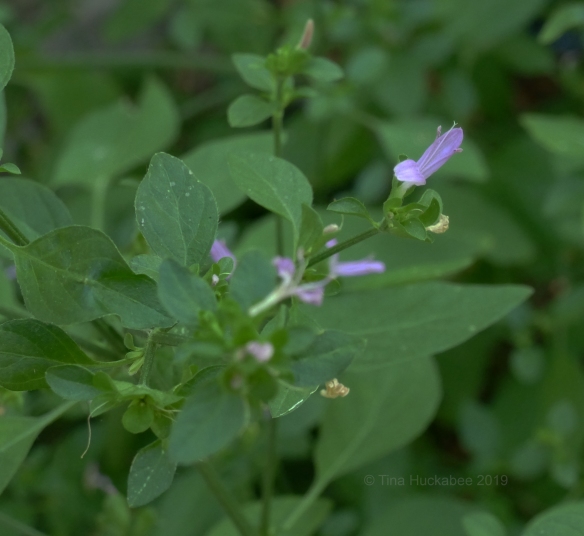 Branch Foldwing appears delicate, but it shrugs off our heat and dry conditions, always looking its best. 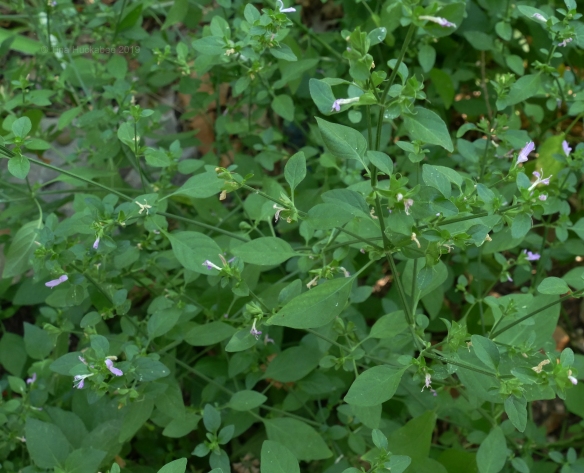 Happy fall, y’all!   September has delivered some nice things for my garden and I hope to yours as well.  Hang in there Texans–it is autumn and time to kick summer to the curb.