I’m guessing that the title captured your attention?  As well it should, because  Martha Gonzales rose and Old Gay Hill China rose are both rose shrubs worth noticing and growing, and both are stellar performers during a (so far) mild, drippy winter here in Central Texas.

I’m not a huge rose fan.  I like them just fine; I sniff the blooms and enjoy the results.  I think they’re pretty, when they’re pretty.  In general though, I prefer other plants in my gardens like grasses, perennials, and wildflowers. But I do like Martha and Old Gay Hill.  Both are antique roses, meaning that folks brought them to the New World, probably before the late 1800s, and planted them in small towns and on family farms. Due to hardy Rosa genetics, the roses flourished without much care and here in Texas, that’s the ONLY kind of rose that you want!

I accidentally purchased my Old Gay Hill rose shrubs some years ago.  I’d read about the rose, but was hankering for a Martha Gonzales, which the nursery didn’t have in stock at the particular point in time that I was hot to buy. But I had money to burn and energy to spare, so the Old Gay Hills came home with me.  I’ve never regretted that trip home as the roses have provided bursts of color, couple with an evergreen presence, excepting during the deep heat of summers and post-freezes of winters.

I’m charmed by the bride-of-Frankenstein stripes of white that each rose displays amid shouts of scarlet petals. New foliage is bronzy, held aloft by maroon-tinged stems, topped with sweet buds which open to generous, fragrant blooms.  Mature leaves are green, with a border of bronze. 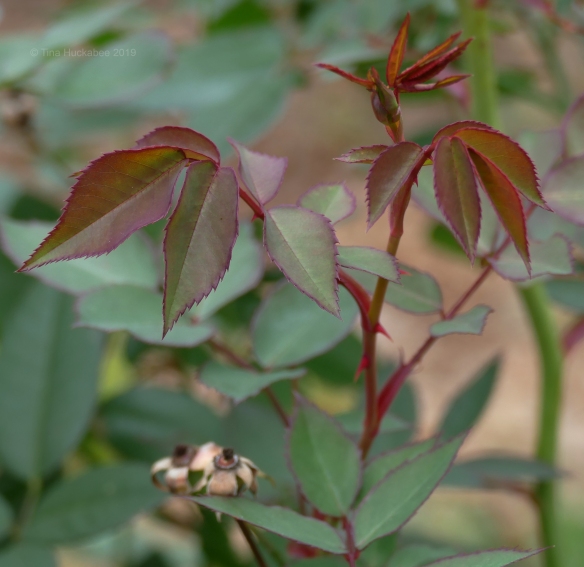 The Old Gay Hill was discovered in Washington County, Texas, near a town called Gay Hill.  It’s listed as a “native” rose in the link above, but many rose species were brought to Texas by European immigrants during the 1800s.  Like most immigrants to North America, the rose varieties settled in, accepted their new home–heat, drought, and everything else–and did what immigrants always do:  they made Texas a better, more beautiful place.

Apparently, I like red roses.  Unsatisfied with growing only Old Gay Hill, I eventually planted the desired Martha Gonzales roses.  The Marthas grow a smaller bloom, but rival Old Gay Hill’s in brilliance and beauty.  The petite roses are deeply fragrant, a delight to the nose. In my experience, the Marthas are better over-all bloomers than the Old Gay Hills, but they’re also located in sunnier spots.  The shrubs are foliage-dense, though haven’t grown particularly tall for me. I’ve seen Marthas grow quite large in both height and width, some in my own neighborhood.  Those are the ones growing with ample, year-round sun.

I’m especially fond of the foliage on this rose shrub.  The leaves are deep green, flushed with a tinge of burgundy, each leaf edged in wine red.   Though smaller than the green leaves of Old Gay Hill, Martha’s leaves are richly colored.  The pairing of carmine blooms with the vivid leaves is stunning.

Both rose varieties are disease free, nearly thornless, and are frequented by many of the pollinators who visit my garden, though right now, there’s not much pollinator action, excepting honeybees on warmer days.  During this mild winter, my roses have been stalwart bloomers and I’m enjoying the flowering.  A hard freeze is predicted in the few next days which may end the the show the immediate future.  If that happens, I have only to wait until  March or April for the crimson tide to return.

Winter red blooms are chasing away the winter blues for me.  Do you have winter blooms cheering your garden?

33 thoughts on “Martha and the Old Gay Hill”