I suppose the title should read:  Bees in Blooms.

Bees of all stripes and wings are active in the late summer garden, sticking their probosces into the depths of flowers and reveling in pollen. This week, I’m crowning the honeybees as the winners of the bee beauty pageant. From a purely self-interested standpoint, honeybees are significantly easier to photograph, as they’re not speed fliers, nor teeny-tiny, like most of the native bees.

A preferred nectar source for honeybees are the charming blooms of the Coral Vine, Antigonon leptopus.

I grow one small bit of this vine and from late summer into fall, the bees are all over it, all the time.  Tagged as an invasive plant here in Texas, as well as some other southern states, in all the years I’ve grown my vine I’ve only seen two or three seedlings develop. That said, I probably wouldn’t grow it if I live in a rural area and not smack-dab in the middle of a city, at some distance from a green belt.  Rural gardeners should steer clear of this plant and choose native-to-region plants instead. 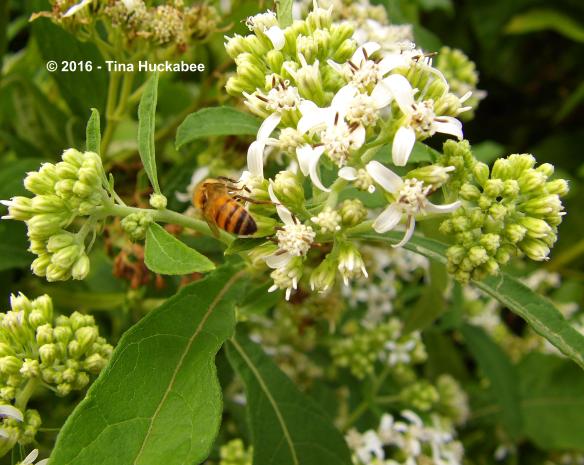 Majestic sage, Salvia guaranitica, is lush with its royal blooms this wetter-than-normal summer.   Typically, I see one or two native bee species at this plant, but honeybees have shown interest in stealing nectar.

Zexmenia, Wedelia texensis, always hosts a variety of  native pollinators who work its cheery yellow blooms;  honeybees are included in that mix.

Garlic chives, Allium tuberosum, recently began their short bloom cycle in my garden, but it didn’t take long for the honeys to find them.

Another perennial preference of honeybees and many other pollinators is the Rock rose, Pavonia lasiopetala.  I like this back-lit shot with the early morning sun, setting bee and bloom aglow.

As well as this shot, which simply highlights both–and the foliage, as well. 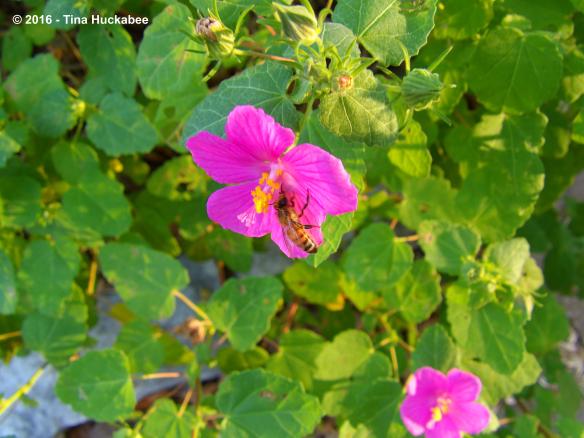 An impulse buy from a nursery a couple of years ago as I observed honeybees clamoring for nectar from its blooms, is this Shrubby blue sage, Salvia ballotiflora.

I’d say that the bee is busy and content with its bounty.  The Shrubby blue sage also attracts several species of native carpenter bees, as well as a variety of butterflies.

The native-to-South Texas, Yellow bells, Tacoma stans, always has bee visitors, but rarely (or so it seems)  at the angle that I can easily photograph.  No bees at this bloom cluster, but these flowers always please.

A bee-less photo, but of a great bloomer and nectar source for many different pollinators.

Another bee-less photo is of blooming Garlic chives and in the background, a purple blooming Autumn sage, Salvia greggii.

Both typically have pollinators in attendance; I happened to catch the combo in a quiet moment.

I thank Carol at May Dreams Garden for hosting this monthly bloom bonanza known as Garden Bloggers’ Bloom Day.  Join in, share your garden pretties, then click over to her lovely blog to see and learn about blooms from many places.

22 thoughts on “Bees in Bloom”