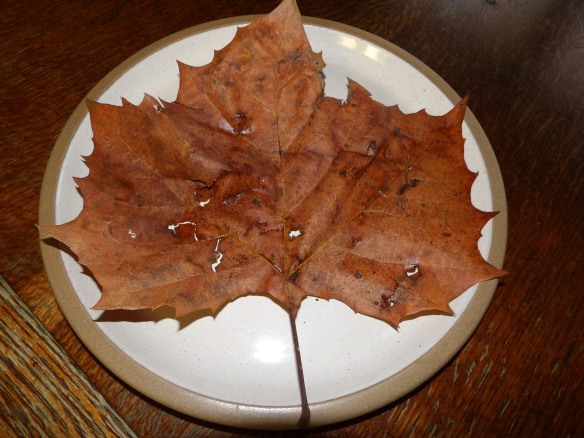 It has a few little dude leaves too. 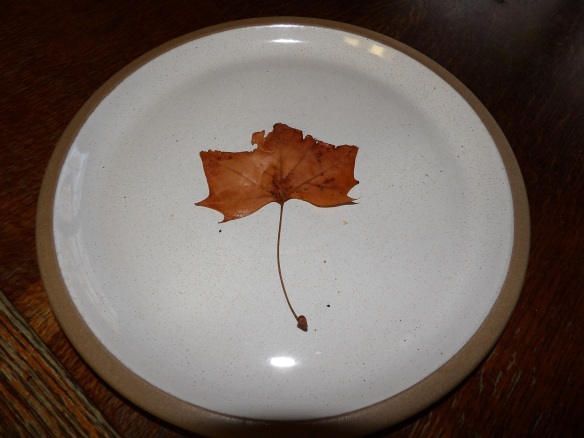 My Sycamore still hosts some leaves, both big and small, though most of its leaves are now on the ground. 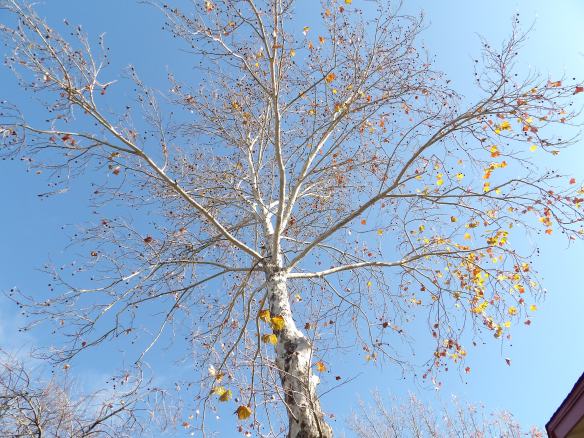 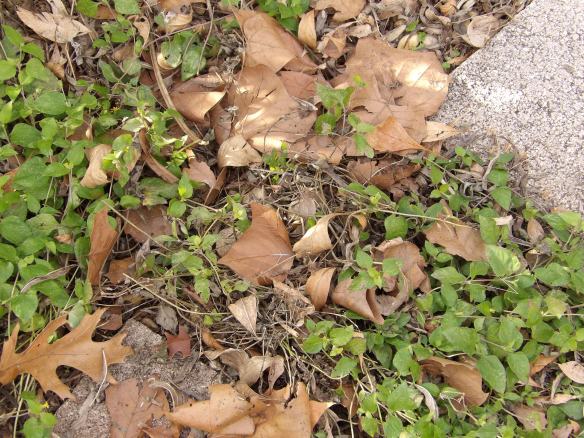 There are leaves over, under, and around shrubs, yuccas and all manner of plant material, as well. 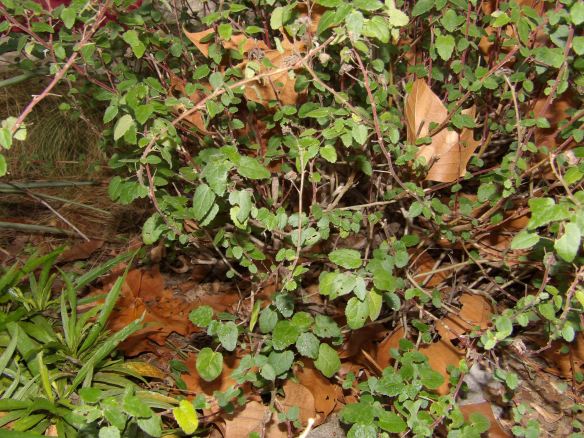 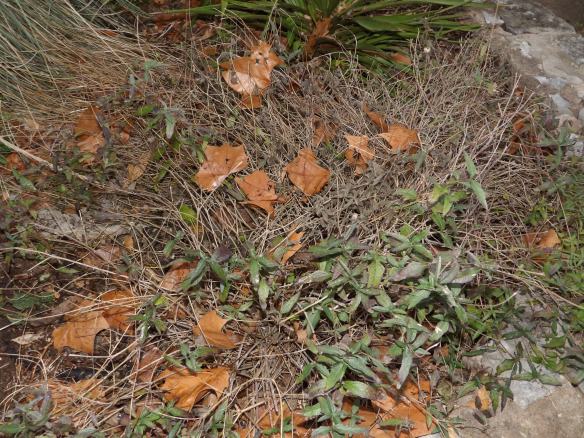 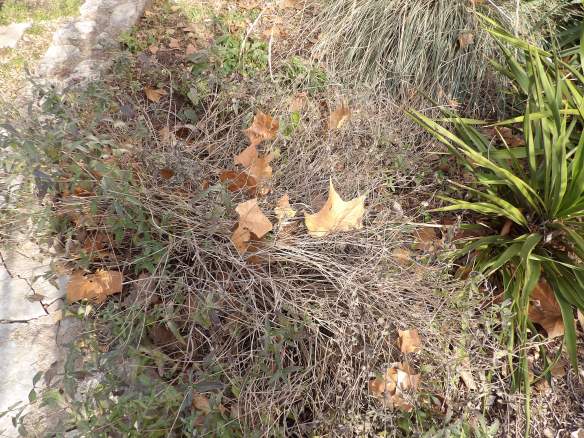 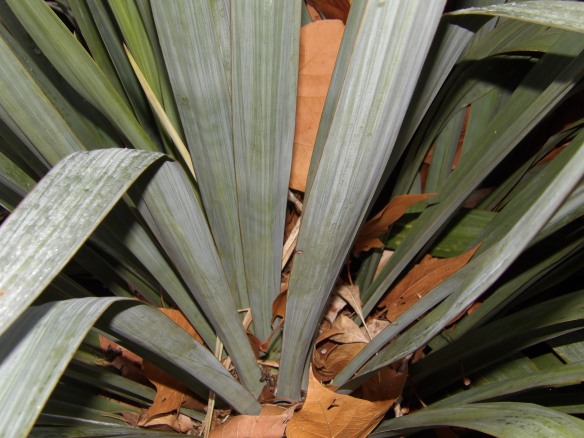 Some have sacrificed their all for the life cycle of the deciduous tree. 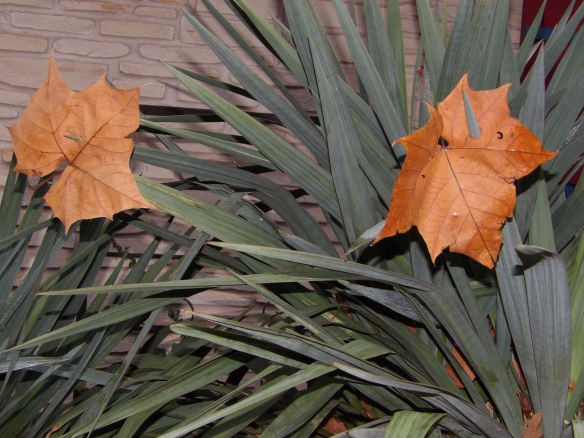 In December’s Tree Following post, the Sycamore’s foliage had begun its autumnal color turn, courtesy of the slow down chlorophyll production and the visual uptick of carotenoid manufacture, but now that turn is essentially complete and leaf function for the tree is concluded for the year.  In botany, the process of leaf drop is called abscission.  Leaf drop typically occurs in late fall and winter, mostly in response to the lessening of light, but also in response to colder temperatures. Abscission also happens during tree stress and, despite its native tree status, the American Sycamore stresses during the hot and dry Texas summer months, some years more than others.  Many of these leaves dropped during July and August when our temperatures soared and the rain ceased. 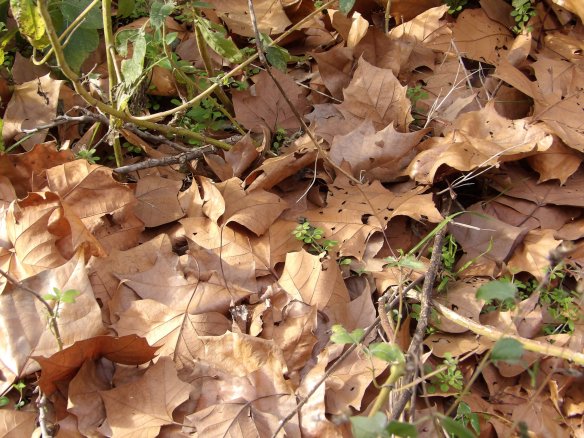 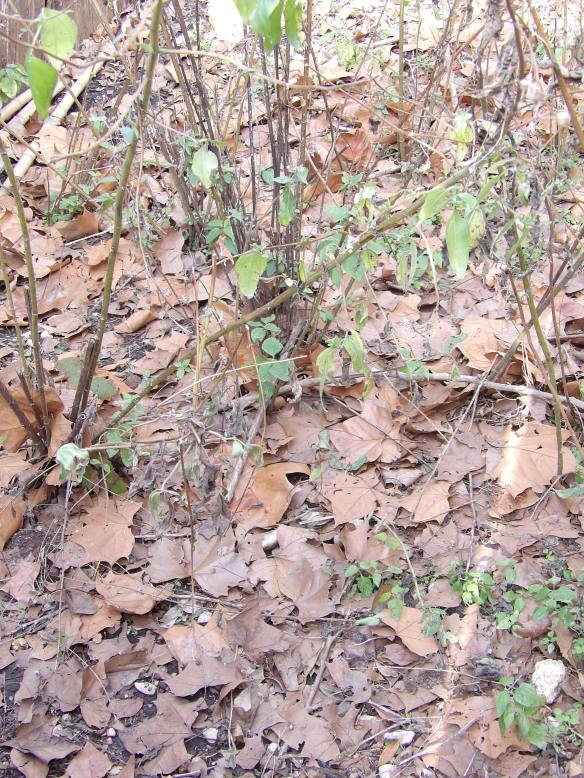 Except where I find them annoying (clustered ahead of the front and back doors, ready to hitch a ride on the dog’s fluffy tail or to get blown in with the slightest puffy breeze as the door opens), I allow leaves to stay on the ground to become leaf mold and to decay.  That’s especially true in the wildscape part of my urban property which doubles as a work area. 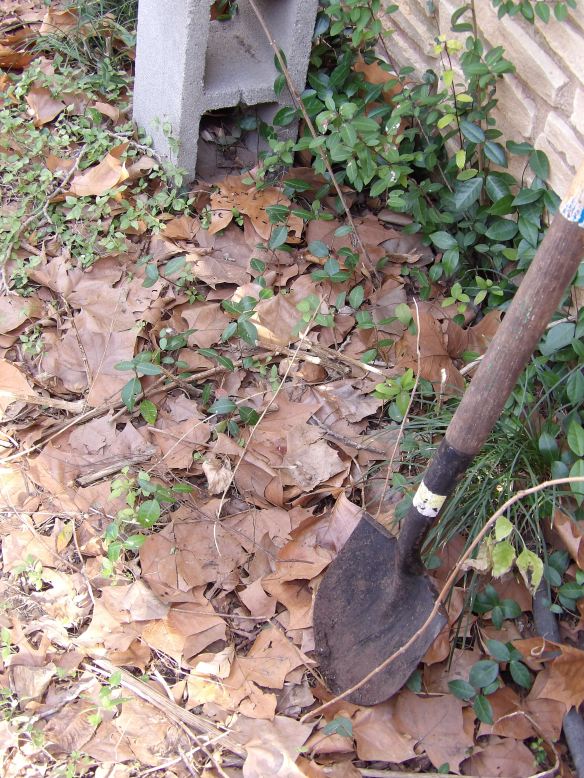 Leaf litter, as part of a wildlife habitat philosophy, is a good thing.  Somehow in the past decades, American society was sold on the idea that leaves on the ground are bad and ugly and must be aggressively removed.  With great fanaticism, we crank up the gas-guzzling blowers and mowers, add massive noise levels to all of our towns and cities, and spew fossil fuel exhaust into our world to rid ourselves of the offending masses of leaves.  Whatever happened to using a rake?

Yes, dropped  leaves are a little messy to the human eye, 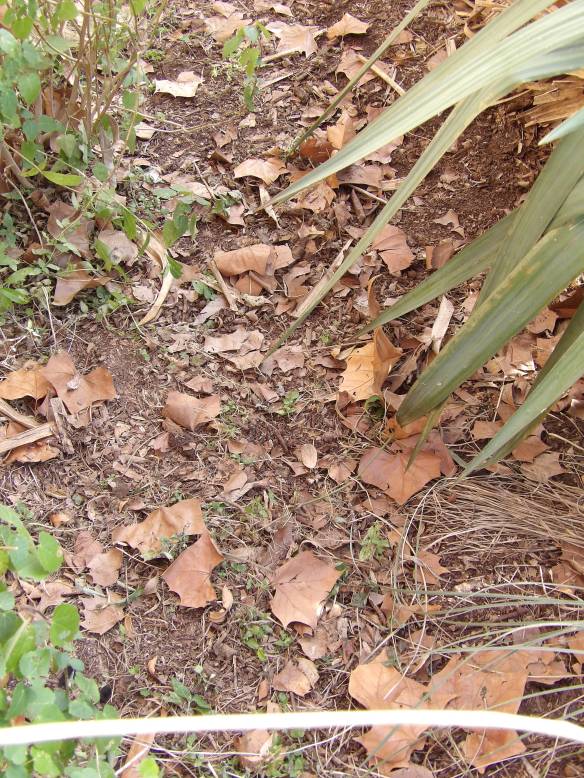 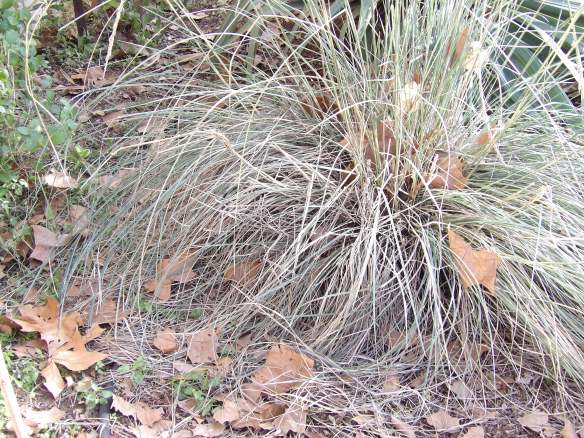 …but leaf litter serves as mulch, as protection for insects during winter, and a part of the system of biological breakdown–all good for those who make nature their home. 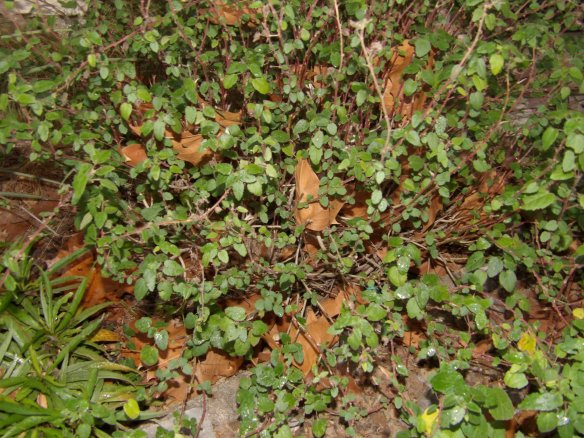 Within reason, I let leaves lay where they fall. Giving in to my neat-freak tendencies and urban neighborhood standards,  I vacuum up large leaves (Sycamore and Oak) with an electric (though still noisy) shredder and place that shredded stuff in spots of my gardens, 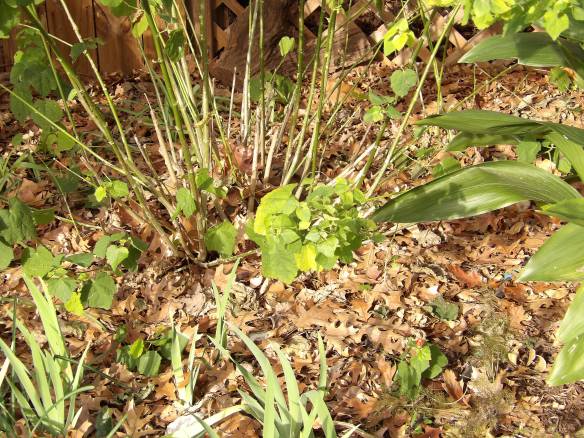 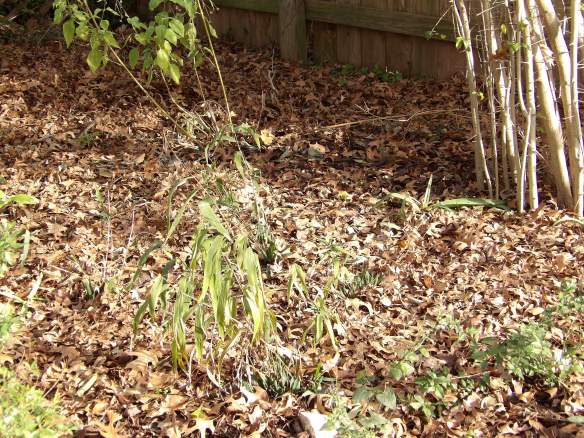 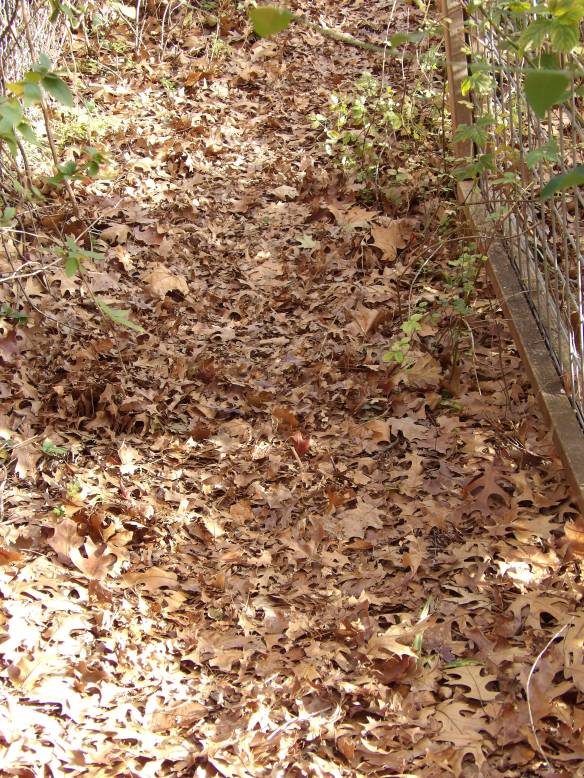 As for the last of the leaves, especially the larger of the Sycamore beasties, I rake them up along with other garden detritus for yard waste pick up.  No worries  about garden “waste” being buried in a municipal landfill, the ex-garden stuff will be combined with treated sewage sludge and sold as a soil amendment. 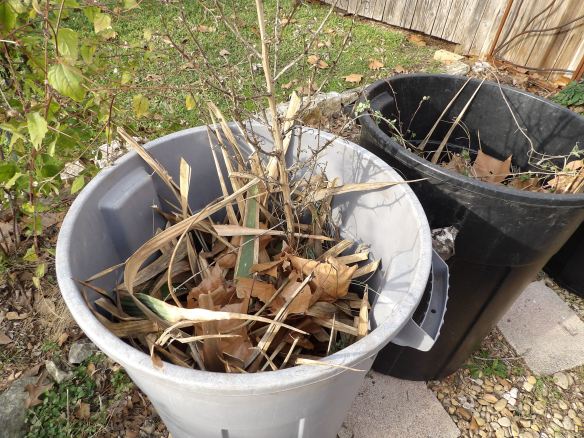 My American Sycamore is nearly barren of foliage now. Leaves have blown away, are blanketing gardens and pathways, or are mingling with other rotting material in the compost. Abscission is when the cells connecting the leaf petiole to the stem are sufficiently weakened and the leaf breaks from the branch. This process naturally occurs over the course of the growing season and when the cells are done-for, 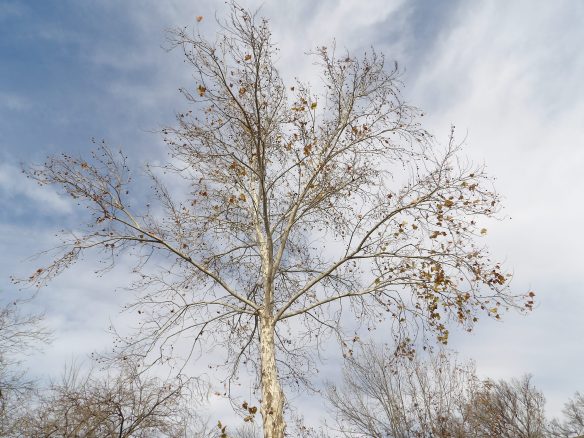 …so are the leaves on the tree. Though most are down, some of my Sycamore leaves hang tough. 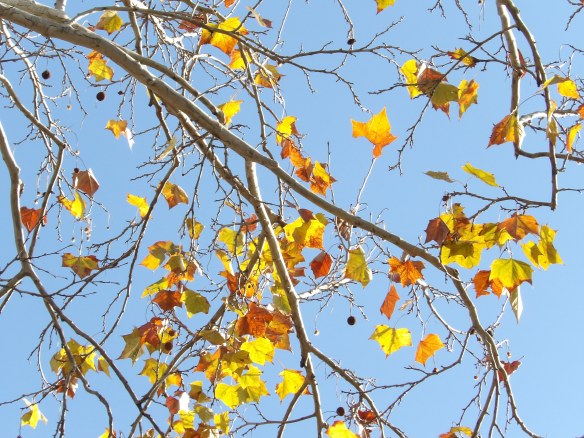 I expect the hangers-on to drop soon–today, tomorrow, this week–soon. Then all that will be left will be those dangly, decorative seed balls. Shall we count them?

Many thanks to  Pat at The Squirrelbasket for hosting Tree Following.  Please pop over to her blog and learn what her tree and many others are up to for January’s Tree Following.