And, unfortunately, not planted or grown commercially nearly as much as they should be.  The Golden Groundsel (Packera obovata) is a beautiful spring blooming perennial ground cover native to much of North America, including Texas.  It belongs to the Asteraceae (Aster) family of plants,

and is a wonderful addition to a shade or part-shade garden.  It can be planted in a formal setting or as drifts in a woodlands garden.  But in either place, it brightens the late winter/early spring  garden spectacularly.

I first became acquainted with Golden Groundsel just over two years ago, when I noticed a patch of bright yellow  flowers in one of the native woodland areas that I garden at the Green Garden in Zilker Botanical Gardens (ZBG).  That patch absolutely resonated yellow! I recognized the plant because I had read about Golden Groundsel before, although this was the first time I’d actually seen it in a garden.  Most of the year, it’s a ground cover with evergreen, oval and finely serrated leaves.

In January/February (in Austin), it sends forward its bloom stalks.  The slender stems grow to about a foot tall, then burst open with shockingly bright, little flowers.

It colonizes well in ideal conditions and is an easy plant to grow.  Its water requirements are moderate and it fits well in a xeric landscape.  If it gets water once a week in a hot, dry summer, it’ll be just fine.  In the Green Garden,  I moved some Groundsel in late spring of 2010 to this spot, 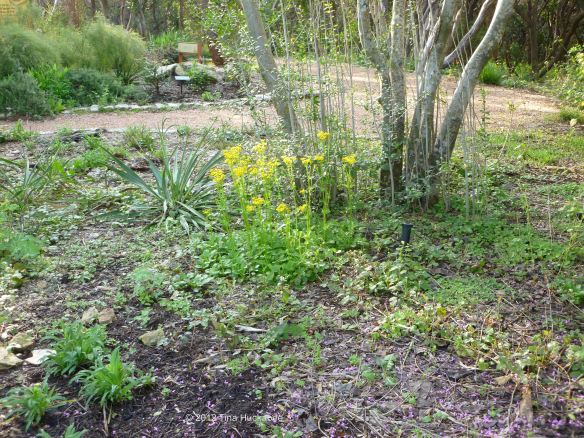 and while it bloomed last spring, it’s even lovelier this year.  Here, it gets mid-day sun in the summer, with dappled light most of the rest of the day.  It also receives irrigation once per week.  Its companions include Turk’s Cap, Twisted Leaf Yucca, Purple Coneflower and also Columbine.

The two other areas where Golden Groundsel is planted in the Green Garden receive more shade and thus, the plants are not yet blooming.  This group is in a native woodland area which receives very little irrigation.

This second group is planted in the Habitat Garden.  This colony began with six starts, about 15 months ago.  It gets regular (once/week) irrigation and dappled light.  The soil is a bit on the heavy side and you can see how well it’s filled in. 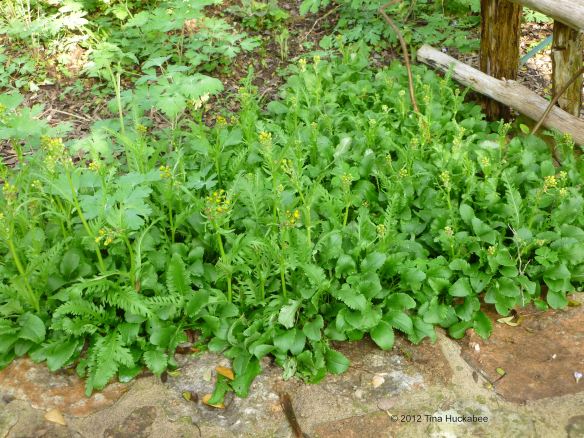 Golden Groundsel is a good nectar source and given that it’s often one of the earliest to bloom, very appreciated by hungry bees and butterflies.  Oddly, it’s blooming a little later this year compared to the last two years.  This is in contrast to so many other plants which are blooming earlier than their normative bloom times.

Golden Groundsel spreads by  roots and by seeds–don’t cut back the flower stalks until the seeds have ripened and dispersed.  It doesn’t seem to spread voraciously by seed though.  My only experience with propagating Groundsel is by root division. When I transplanted the Groundsel at ZBG, I had to be careful about where I dug the plant up from the soil.  Several times I shoved my trowel firmly into the ground, assuming that I was well-underneath a nice root ball, only to realize that the rosette that I was attempting to dig up was connected to another by a runner and there was no root to excavate.  So, if you separate this plant, you must  be sure that the rosette you’re aiming for actually has some root.

When I decided to write about this plant, I called a number of the independent nurseries in and around the Austin area to check for availability and almost no one was familiar with this plant.  Only the nice folks at Barton Springs Nursery  knew anything about Golden Groundsel although they don’t carry it regularly.   I do know that it’s sometimes available at the Lady Bird Johnson Wildflower Center’s plant sale, but I don’t know if they grow it for every sale.

For more information about this great and underused native plant, check out the Central Texas Gardener link–Golden Groundsel was the “Plant of the week” for the  October 1, 2011 program.  Or, as always, you can find information on the page for Golden Groundsel in the Native Plant Database. 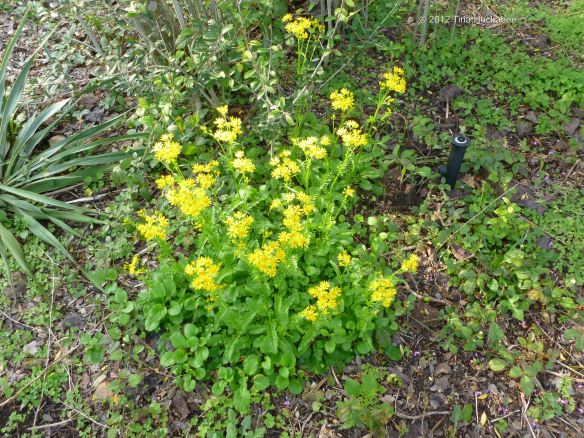 I’m going to purchase and plant this lovely perennial for my own garden.  Gardeners should encourage their local nurseries to carry available, but rare, plants.  In turn, growers will begin to produce these plants for retail sales.

2 thoughts on “What Is It About Yellow Flowers?”