The end of February looms and I’m almost done with the pruning in my personal gardens and the gardens I tend at Zilker Botanical Gardens.  I waited as long as a could before I started pruning, but almost waited too late.  Spring has sprung in mild Austin and I need to wack back the remaining plants that I intend to prune.

I pruned the roses  in my gardens last week.  Most had been blooming for a few weeks, so it hurt to cut back such beautiful flowers.  Gardening sometimes resembles parenting:  the difficult and painful things that you occasionally must do, are often the most important for nurturing growth and blooms.

Philosophical musings aside, the Mutabils (Rosa ‘Mutabilis‘) was big and full of darling blooms.

It had even developed new stems.

But it’s pruned back and now ready for new beginnings and a long year of growth and blooms. 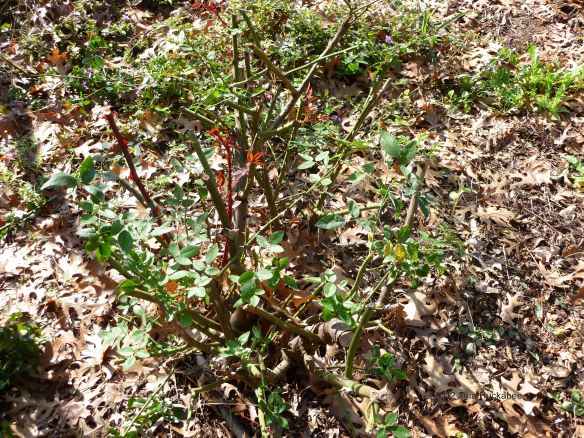 The Knockout Rose (Rosa ‘Knock Out’) produced  lovelies for my kitchen table and to enjoy outdoors,

but it too is reduced to mere sticks.

I’m more careful with this rose than I am with my others (although I don’t think it’s  necessary because this rose is a tough one).  I clean (disinfect) and sharpen the pruners before I start with this rose.  I take care to prune the branches cleanly above a leaf node.

The node is the pinkish bump to the right of the cut, above the thorn.

The Belinda’s Dream Rose is a new one in my gardens, so I’m leaving it as is.

But at Zilker Botanical Gardens, there are two in the one of the beds I tend.   I pruned both down to their major three or four branches.

The other roses in my personal gardens, the Martha Gonzales and the Old Gay Hill, are treated like I treat my hardy native shrubs–I thwack away with abandon!  I transplanted both of these last year,

so they haven’t grown much.  But I did prune them back a little, 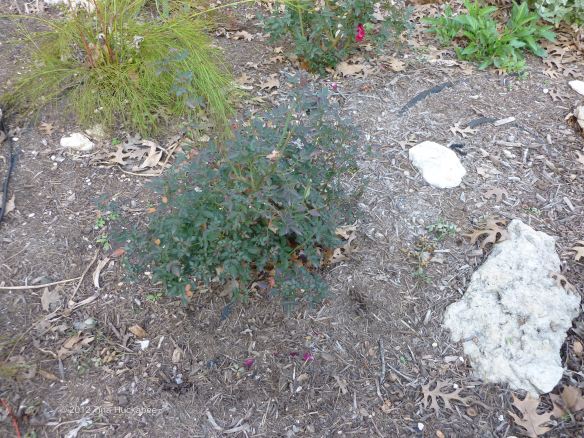 so they’ll be ready for growth in the coming year.  The Old Gay Hill still had buds n’ blooms, so I left them–there’s no need to be heartless, after all.

I cut back the Martha Gonzales Roses at Howson Library Garden last week as well.    This photo is on the City of Austin Grow Green Resources page, under the “Landscape Design” section and can be seen when you click the “Classic” design.

There are a total of eight roses at Howson. This view is of the four at the southern end of the area where the roses are planted.  This photo shows the roses in early fall and by the end of the growing season, they’re even larger.  I didn’t take a photo before I pruned them back last week.  (Oh, no!  That would have made too much sense!)   But, I did take a picture once I pruned.  This is the same angle now, after pruning: 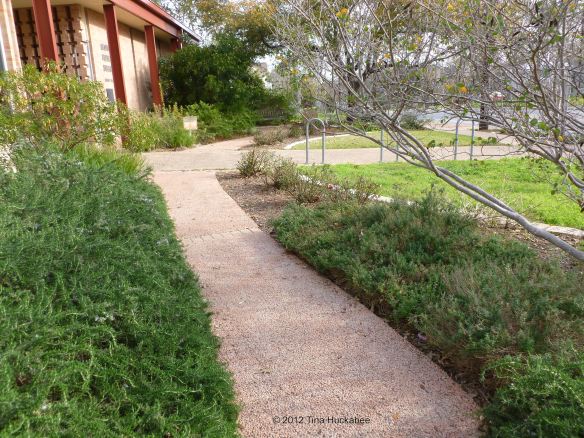 and from the front.

The Martha Gonzales is such a hardy rose that the gardener doesn’t have to be particularly careful about cutting.  I clip off any dead branches, but other than trimming them to roughly the same height and shaping and tidying a bit, not much more is required during pruning time for this beautiful rose.

Pruning roses is easier if you keep the pruners clean and very sharp.  It’s also a great idea for Central Texas gardeners to plant roses that are hardy and tough and don’t require much water.  Check out the “Native and Adapted Landscape Plants Guide”  under “Plants” on the Grow Green Resources page for some examples of suitable roses for our area or visit one of Austin’s excellent independent nurseries for guidance on what roses to plant.

It’s not too late to prune and it’s time to plant some pretty roses in your garden.