I love my dog.

He’s a more loyal companion and friend than some of the people I’ve known. But it’s sure hard to garden with a dog around. 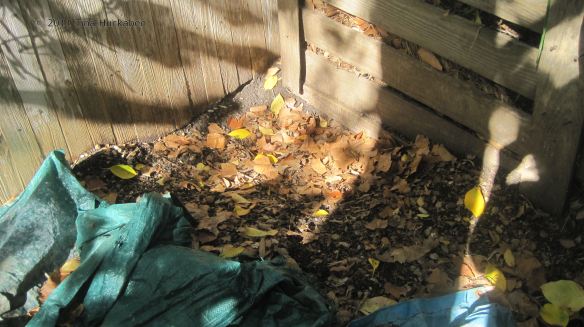 Beside the compost bin.

Behind an old stand of Turk’s Cap.

Under the fence and non-native honeysuckle.

Before you say, “Gee, maybe if she walked him….”  He’s walked two or three times a day, every single day, rain or shine.   And I’ve allowed him the space for digging because he likes it and it’s not damaging any part of my gardens that I genuinely care about.  I have plans for screening that will help hide the one particularly unsightly area (under the fence) that Asher has created, but I wish it hadn’t been necessary to add yet another project to my already long list.

Actually, he’s better behaved than many dogs.  He’s never romped through my gardens, ripping things out with abandon.  He doesn’t dig up newly installed plants.  He doesn’t urinate on seedlings–something to be thankful for.

I never see photos in garden magazines and books, showing the havoc that dogs can wreck in a garden.  Those publications tend to showcase the perfectly coiffed garden–no bloom or leaf out-of-place.  I don’t know what color the sky is in their world, but it isn’t the same as in mine.  In the real world, gardeners have dogs and gardens and attempt to enjoy both without too much fret and stress.

I’ll share a funny story.  So, I let the remains of a large part of my grass area  in my back yard die this past year.   Mostly I did this because I wanted to reduce the turf area, reduce water usage and lessen general maintenance.   Also, my beloved dog  rolled in the grass and there were bald spots developing (in the grass, not on the dog), so I was more than happy to get rid of what remained of the grass.  I used layers of newspaper and then mulch on top, so that any errant roots still alive wouldn’t return.

Every chance he gets, Asher lumbers out to that particular area and rolls,

Right. So much for low maintenance!

It’s true that I don’t have to water, mow or edge the area, but some days I have to brush Asher five or six times so that the floors in my house aren’t sprinkled with mulch and leaves.  My son claims I say, “Damn Dog” every time Asher goes outside and wants to come back inside, oblivious that he is shedding mulch and leaf bits all over the house. (Thank you very much, Asher, but the tile and wood floors don’t need mulch!)

Even our cat, Nuri, thinks he’s an idiot and would never do such a thing. (No, he just catches birds–or attempts to.  Damn cat!)

Caught in the act! 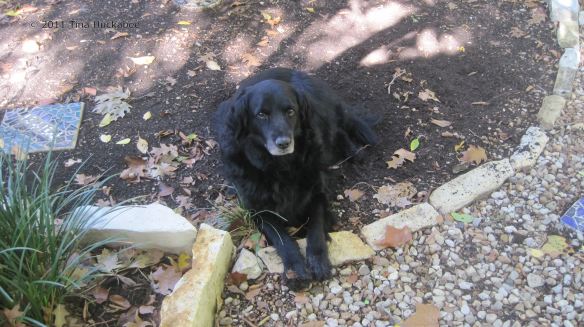 Gardeners with dogs (and cats, too, if they’re causing botanical mischief), constantly must stay a ‘step ahead’ of their pets’ idiosyncrasies.  If the gardener has pets, it’s almost inevitable that some method of plant protection will be necessary.  Solutions for frustrated gardeners include installing physical or invisible fencing around gardens.  As I developed my gardens over the years, I purposely left grass so that Asher (and previous dogs before him) would have that to enjoy.  But the grass couldn’t survive my neglect and doggie overuse and the mulched areas that replaced the grass created other maintenance issues that I didn’t quite anticipate.

That said, Asher’s a good companion when I garden and seems generally content to hang out on the rock and mulched sections of the my gardens.

Plus, I’ve allowed him certain digging privileges, so we’ve come to an accord. 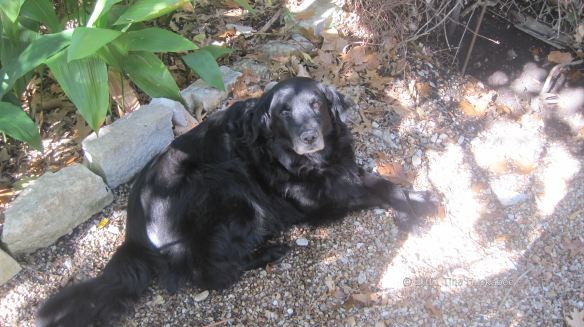 So I’ll let Asher be a part of the garden.

He’s twelve years-old, a great buddy of mine and I’ll use the (many) times that I have to brush him as bonding time.  How’s that for rationalization?  All worthy relationships take work, effort and compromise.

Yes, it’s challenging, though not impossible, to love a dog and a garden simultaneously.

At least I don’t have deer!