At the risk of ridicule from my northern kin–I woke up to snow today! There wasn’t much of the white stuff, but enough for me to bring out the camera and crunch around the garden.   Actually, there was very little crunching as I meandered, because the air temperature was 32ºF (0ºC), but the ground stayed warm enough that the snow which landed on the ground, didn’t stick.

The snow blanketed plants, rooftops, and other assorted surfaces, which was a joy to see.  Here in Austin, Texas, ice storms are more often the norm than actual snow.

I’ll probably kiss my crinum lily foliage goodbye after today.  It’s remained evergreen up until now, but after our “snowstorm,” I suspect it will be rendered frozen mush.  That’s fine,  the mushy straps will be good additions to the compost bin. 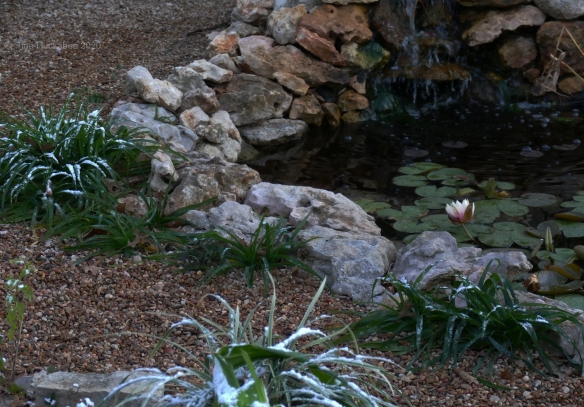 At sunrise, the sky was clear.  With a morning of sunshine, the temperature will warm  quickly.  But for this brief moment in time, snow highlights the textures of the garden.

Snow-pack (snort!) highlights the back garden greenery in white. …and its blue cousin. Brrr!  Snow capped bee hives!   The bees were warmly tucked in, but a short time later, I saw a few venturing out.  What must honeybees think of the snow?

The temperatures weren’t cold enough for the Frostweed, Verbesina virginica, to perform its icy show, but I’d say that this morning, it lives up to its common name:  frostweed.

A patterned Barbados cherry, Malpighia glabra.  The leaves of B. cherry are quite attractive, but more so with a touch of the white. At 10AM, the snow has melted in my garden.

It was fun while it lasted!