After our disappointing winter/spring with no resident Eastern Screech Owls living in the nest box–wooing, mating, and tending offspring–we moved on to other concerns and projects. Personally, I missed the show, though I suspect the owls didn’t miss my oooing and aahing at their antics. And I know that an owl pair raised a family nearby, so that’s a consolation. Mama stopped by for a visit one day to show off the owlets, and occasionally I hear and see one or two at sundown.

Once owl nesting season is done and the family has moved on, I typically don’t pay much attention to the nest box as it sits unoccupied and unadorned in the Red Oak tree. But in late June, and just out of curiosity, I plugged in the owl cam cable into the computer.  Expecting nothing more than a placid scene of lonely leaves and discarded grass, I was surprised to see this: two snoozing Virginia Opossums, Didelphis virginiana. 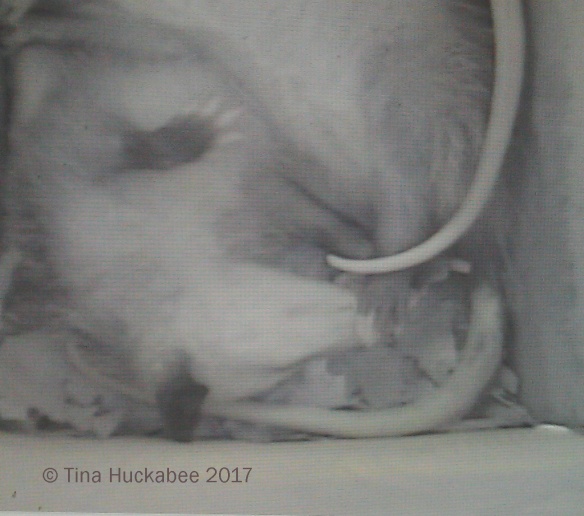 Two?  The second is underneath the top–opossum bunk-bed style–but there are definitely two hairless tails, so unless there was an alien invasion of two-tailed opossums, there were two owl house interlopers on that particular day.

Over the next couple of weeks, I checked the cam daily.  Sometimes a sleeping marsupial filled the box, sometimes the box was sans opossum.  I assume the cuddling two are juvenile siblings, but I only saw them together that one (first) time.  All other nest box peeks have delivered just the one opossum, but I’ll bet it’s one of the pair. Usually, he/she has been asleep, breathing peacefully; once, I viewed a very cat-like grooming session.

Because we built the nest box for the owls and the last thing we need is a repeat of a nesting mama possum settled in the box like last winter’s squatter (which you can read about here), we’ve boarded up the place for the season.

Closed for summer.  Will reopen in December, 2017.

If I could convince the opossums that this is only a summer home for them and I knew they’d vacate prior to the owls looking for their winter/spring nesting place, I wouldn’t object too much to hosting a nest box time-share. However, opossums are notoriously difficult to engage rationally and I suspect that my protestations at their presence and ultimate threats of expulsion would go unheeded. Therefore, the nest box will remain boarded up and none but a few ants and the like will be allowed!

I see a juvenile opossum once or twice each week in the back garden, usually when flip on the outdoor lights to let my girl cat inside for the night.  Kitty Astrud watches the marsupial movements, unimpressed and uninterested, showing no desire to follow.  The individual(s) scurry through the garden to avoid detection; no doubt the opossum is pleased when the light goes off and once again he/she has unfettered access to insects from the garden and partially composted goodies in the compost bin.

16 thoughts on “Boarded Up”