With the blossoms of blooms that spring inevitably gifts our gardens, it’s  easy to overlook the foliage of spring.  New foliage emerges from winter-dormant perennials, evergreen plants flush fresh foliage distinct from older leafy brethren, and gardeners take notice at the greening of their space.  In one corner of my garden, there’s little floral interest at the moment, but plenty of foliage fanfare.

The focal point of this part-shade garden rests on a blue pot full of an eye-catching silver-green American century plant, Agave americana.

Garlic chives (bottom left), Pale-leaf yucca (center), and Autumn sage (bottom right) round out the perennial plants in this garden.

Hugging the fence line is a large clump of emerging-from-winter native Turkscap, Malvaviscus arboreus.   I like the bright green leaves and softer form of Turkscap neighboring the spiky, silvery agave.  Another North American green-grey foliaged native, Heartleaf skullcap, Scutellaria ovata, accompanies the agave and fronts the Turkscap, as well as filling in other spots of this garden.

The leaves of Turkscap are wide and mallow-like, which makes sense because Turkscap is in the mallow, Malvaceae, family. 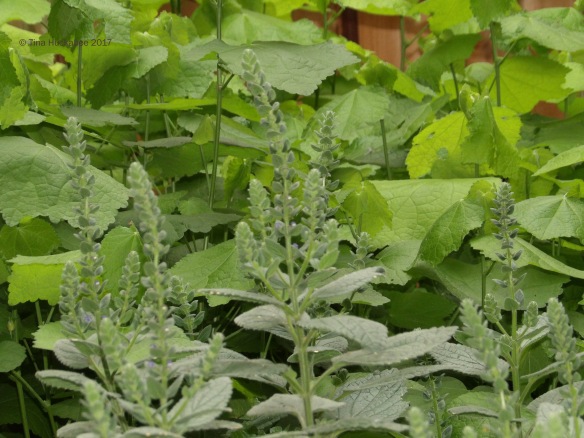 A closer look at Heartleaf leaves and bloom spikes against the Turkscap leaves. 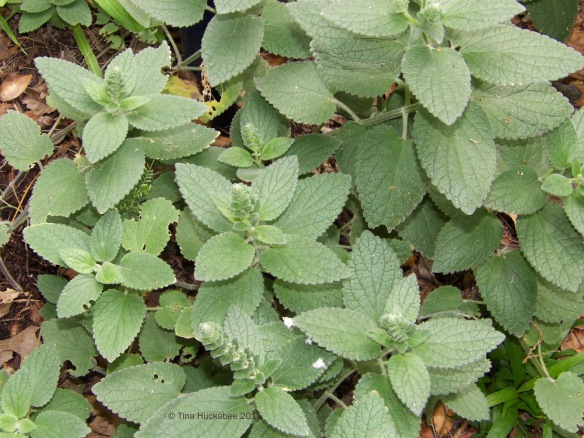 Heartleaf also flowers lovely blue/blue-violet bloom spikes from spring to early summer. The plant is at the beginning of its flowering season and in fact, there are some blooming in other parts of my garden.

Oops–I meant to talk only about foliage for this post!

Blue-grey in color and barb-sharp in form is this Pale-leaf yucca, Yucca pallida, sitting alongside the Heartleaf skullcap,

…and photobombed here by the same plant. 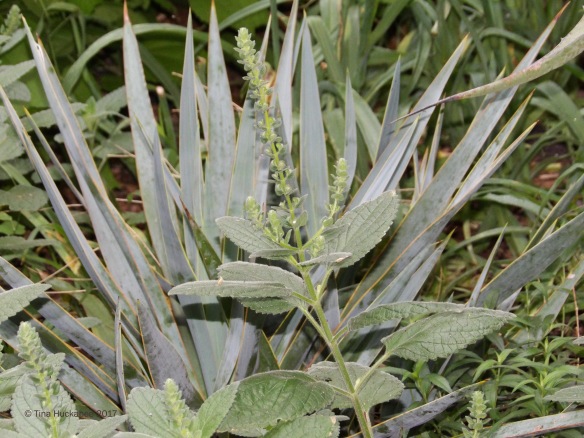 I like this yucca: tidy, hardy, and attractive year round, it’s also one of the few yucca plants that is happy growing in shade and part-shade–and that’s a win for my sun-limited garden.

An emerging Big muhly, Muhlenbergia lindheimeri, just in front of the silly bird, tolerates the Heartleaf buddying-up to it. 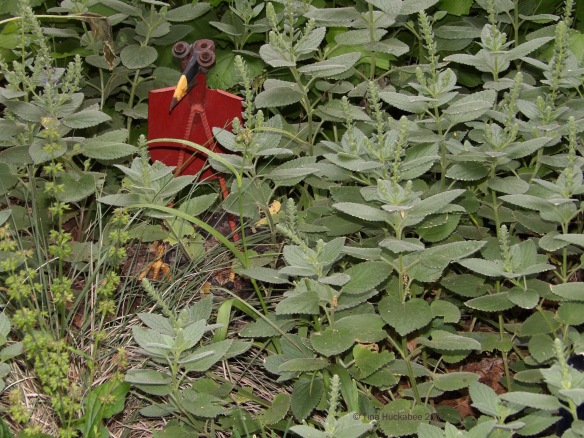 The Big muhly complements both agave plants with its similar shape and slender, grass-like foliage.  Unfortunately, this specimen struggles a bit and doesn’t grow as large or as full as it should; it would thrive with more sun.

Shy, retiring muhly is nearly hidden and definitely overshadowed by the garish Turkscap and the elegant Heartleaf skullcap and Pale-leaf yucca.  The bird shows well though, don’t you think?

Like the juxtaposition of the the silver foliaged agave with the brilliant green Turkscap, Turkscap and Heartleaf (and Pale-leaf yucca!) are opposites which nicely pair with one another.

The Heartleaf continues–yes, there’s plenty of it in this garden– beyond the Turkscap and fronts yet one more yucca-type plant that’s actually another species of agave:  Red yucca, Hesperaloe parviflora.

Garlic chives fill in the bottom right of the photo.

Red yucca’s graceful, slightly arching foliage is a genuine, deep green, rather than the silver/grey/blue greens of Heartleaf skullcap, Pale-leaf yucca, and American agave.  It’s also a gentler plant:  no sharp needles in which to poke the gardener when she’s bumbling around the garden!

Heartleaf drifts into and around three groups of Garlic chives, Allium tuberosum. The chives look spiky, but are soft and malleable. They’re a cheery green, harmonizing well with the Heartleaf, and fragrant too, when stepped on or handled.

At the end of this corner bed, one last vivid green foliage perennial partnering with Heartleaf is Fall aster, Symphyotrichum oblongifolium.

There are a few blooms happening in this garden–the large volunteer sunflower and a couple of red blooms on an Autumn sage, Salvia greggii, but right now this bed is all about foliage and structural plants–both valuable assets in a garden.

Whatever foliage is gracing your garden this April, please check out Christina’s lovely Creating my own garden of the Hesperides Garden Bloggers’ Foliage Day.  Also, happy Earth Day!  Christina’s advice about planting a tree (or two or three!) is excellent; native trees are best, but trees are the life-blood of this planet. Additionally, funding for and promotion of science and research institutions will be this planet’s saving.

12 thoughts on “A Corner Full of Foliage”