The toads were late to the garden party this spring but they’ve finally arrived and are croaking, mating, laying eggs–and filling their niche in the garden environment. 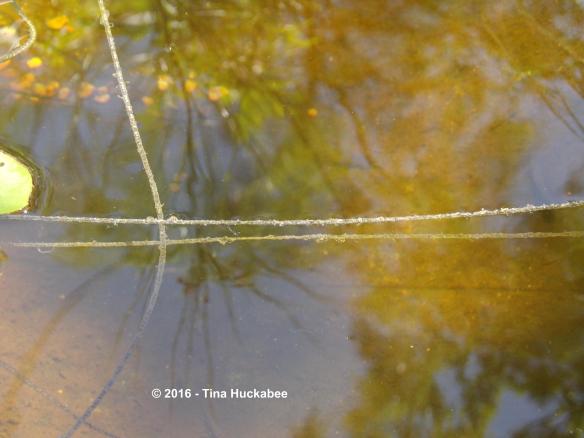 I always think of the gelatinous strings of toad eggs as amphibian strings of pearls–and hopefully that mental image doesn’t put anyone off of wearing the real things. The Gulf Coast Toad or Coastal Plain Toad , Ollotis nebulifer (Bufo valliceps), is the likely species that laid these eggs-in-goo and soon there will be more toads for the croaking, mating, and egg laying. No doubt, some of the toads will make yummy meals for the resident Eastern Screech Owl, Megascops asio, parents and their 5 offspring.

Along with toad eggs and fish, the pond hosts some handsome and varied foliage. I separated the ‘Colorado’ and ‘Claude Ikins’ waterlilies last month; both have since bloomed and very soon, will put on a rapid growth of lily pads, enough to cover about 75% of the pond surface by early summer.

The pads serve as landing strips for bees and dragon/damsel flies, and occasionally butterflies. More importantly, the pads keep the water temperature even during the summer months, as well as cover and protect the fish as they swim underneath the pads.

I also separated the Texas native Pickerel Rush, Pontederia cordata which grows in the bog.

The open, moving water has given the birds, especially the little warblers and finches, a fun place to bathe. Every year, I promise myself that I’ll keep this assertively growing plant from filling in the bog–and every year I fail in achieving that goal. So this year is THE year: I’ll save some space in the bog for the birds to bathe–I’ll consciously weed out the Pickerel rush, even if it’s a weekly chore, so the birds can bathe in moving water.

Another lovely and important pond foliage plant requiring yearly separation is the Ruby Red Runner, an Alternanthera hybrid that grows in the waterfall feature. Like the Pickerel rush, Ruby Red Runner serves as a biological filter for the pond.

Ruby Red Runner grows vigorously, sprawling all over the edges of the pond as the weather warms and the days lengthen.

Taking in a wider view, I’m happy with the perennials which frame the pond.

Across the pond from the perennial garden, is a pea gravel sitting area and pathway. A Katie dwarf Ruellia, Ruellia brittoniana ‘Katie’, and a Rock rose, Pavonia lasiopetala, volunteered themselves for this spot and fit well beside the pond.

These two neighbors sport opposite leaf types: ‘Katie’ is lance-like and deciduous and Rock rose is oval, scalloped, and semi-evergreen.

Nuri the Cat is comfy as he lies on the warmth of the pea gravel. Lazy cat.

The evergreen Soft Leaf Yucca, Yucca recurvifolia, is a pup from the original, now-deceased mother plant. Just in front of the yucca, I recently transplanted some Firecracker fern, Russelia equisetiformis, that rooted out from the mother plant, to its right in the photo.

It’ll be a couple of years before the transplanted Firecracker fern reaches maturity, but I think these two arching perennials paired side–by-side will be a nice addition to the garden and the pond.

The mature Firecracker fern bloomed all winter during our non-winter winter, but is in a resting cycle now. The blooms of this plant are show-stoppers, but the foliage is also special: cheery, spring-green coloring pairs with graceful, arching stems and slender, elegant foliage. 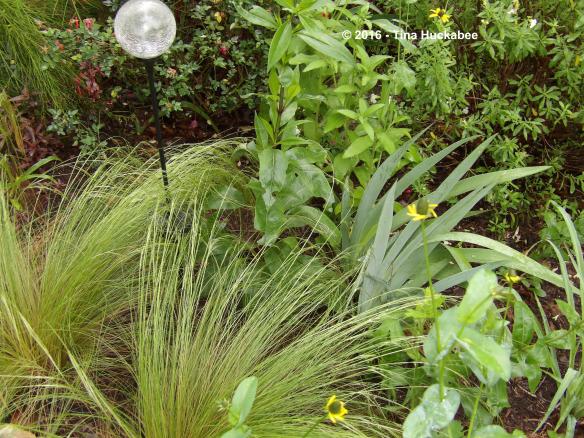 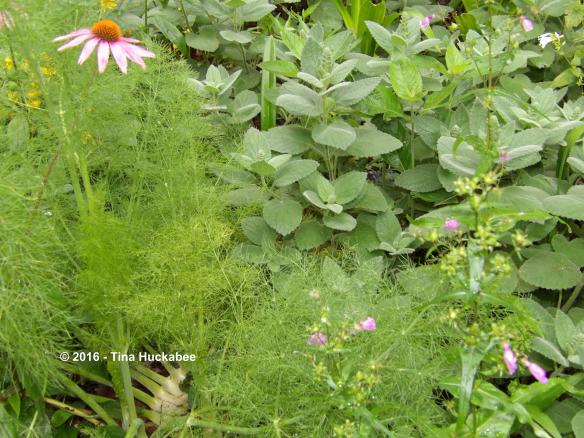 Nearby, Winecup, Callirhoe involucrata, clamors over the limestone rocks bordering the pond.

Individual leaves of Winecup are lobed and hairy. Winecup grows as a ground-cover and spreads about 3 feet wide during the bloom season, which is beginning. 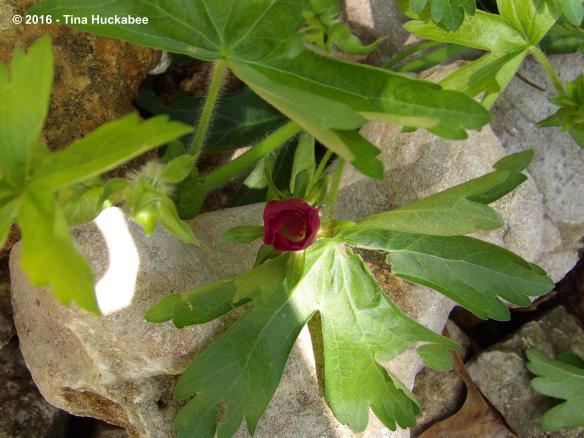 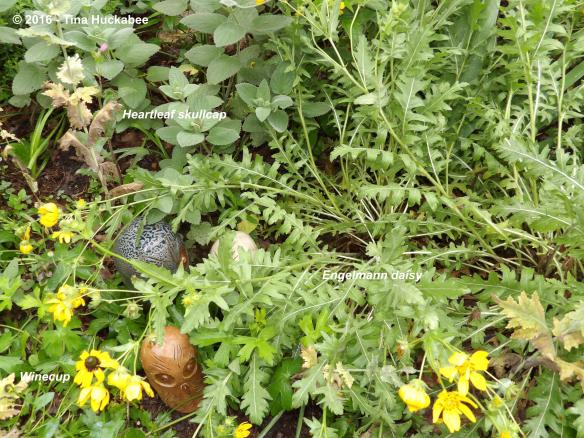 Like the Winecup, the foliage of the Engelmann daisy is deeply lobed–another common name for this spring/summer daisy is Cutleaf daisy. Engelmann daisy is an excellent pollinator plant, the blooms attracting a large variety of native bees, flies, and butterflies.

Celebrating foliage in the April garden, many thanks to Christina and her lovely Creating my own garden of the Hesperides. Check out her Garden Bloggers’ Foliage Day for a look at foliage in many gardens, from many places.

22 thoughts on “Strings of Pearls”