My  American Sycamore, Platanus occidentalis, leafed out this past month.  It began the month in a  mostly leafless state. 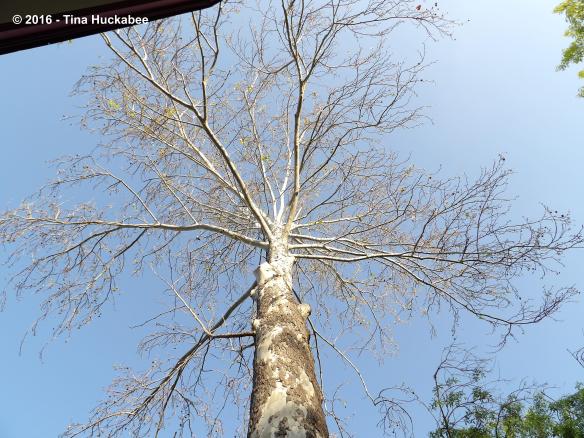 The Sycamore, at the center-left, leafs out later than the Shumard Oak (Quercus shumardii).

It wasn’t too far into March before dots of new green appeared.  I caught the beginning of the leafy action, snapped photos, then went on with my life. 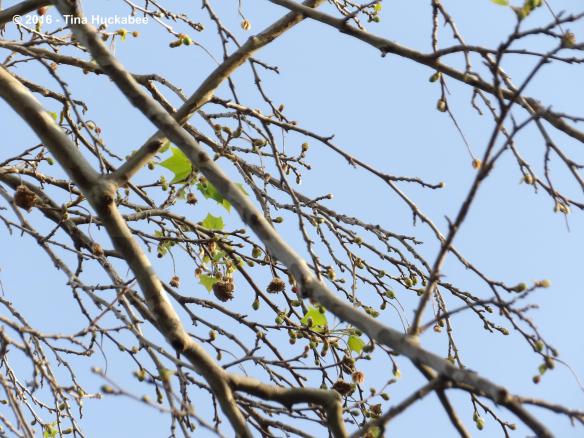 This branch is the only one that is below the roof of my house and therefore, easily accessible. I have no plans to climb on top my roof to get photographs of leaves for this blog.

Sycamore, like most plants, is a monecious plant, which means that each tree has both female (pistillate) flowers and male (staminate) flowers.  As an aside, another way that plants function reproductively is by being dioecious–which means that the individual plants are either female or male.  Fewer plants are dioecious.

I knew that American Sycamores were monecious, but seeing that the tree is monecious is another thing entirely–and that’s the great thing about tree following: I notice these things because I’m paying attention. I assumed that because my tree is tall that I wouldn’t get a good photo of the male and female flowers.  Additionally, I wasn’t trying to get photos of the flowers.   But during in the photo-snapping session mentioned above, I caught both the male and female flowers.

The male flowers sport a sort nubby look along the branches, while the female flowers are fuzzier.  The male flower will break and release its pollen load, usually by wind, but also, by water.  If you recall from our March visit to the Sycamore, we learned about dispersal of seeds by wind, anemochory, and dispersal by water, called hydrochory.  The American Sycamore does both; it’s a good survival strategy to employ a couple of methods of reproduction–it certainly keeps the options open.

You can see that there are plenty of seed-balls for next year’s Sycamore seed dispersal.   For now, the new ones are spring green, 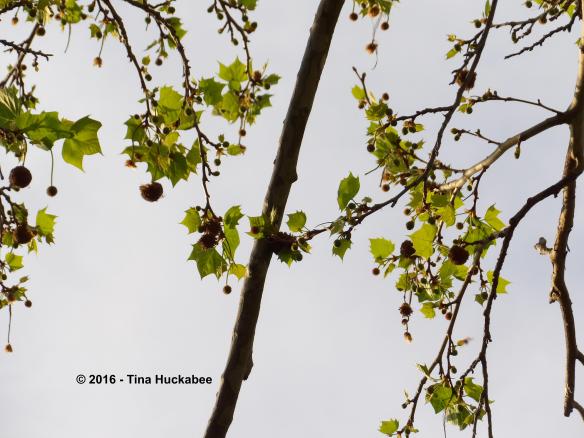 I’ve never seen a nest in the Sycamore, but it serves as a consistent resting spot for a variety of birds like this male Great-tailed Grackle,  Quiscalus mexicanus.                    .

His glorious, purple-black plumage pairs well with the new leaves.  Other birds like White-winged Doves, House Sparrows, Blue Jays, and Cardinals, are year-round visitors to my Sycamore.  As the leaves grow larger and the foliage thickens, it will become more difficult to spot birds resting in the tree.

The foliage is now almost fully flushed out.  Sycamore is usually planted as a shade tree, but also as a tree for urban areas used to thwart air pollution.

Maybe those big leaves will save us all. 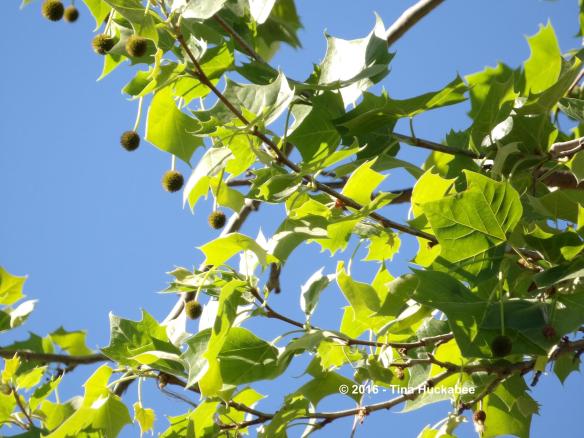 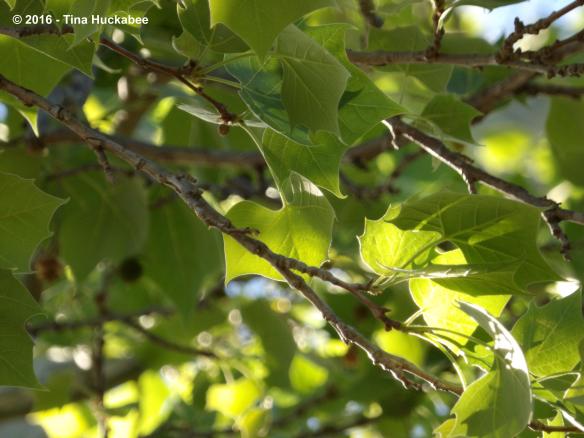 This is the American Sycamore as it enters late spring heading toward the summer months.

Thanking Pat of The Squirrelbasket for graciously hosting this fun meme about trees. Check out her blog for interesting information about trees from all over the world.

15 thoughts on “Green It Is: Tree Following in April”