Some people find this offensive. 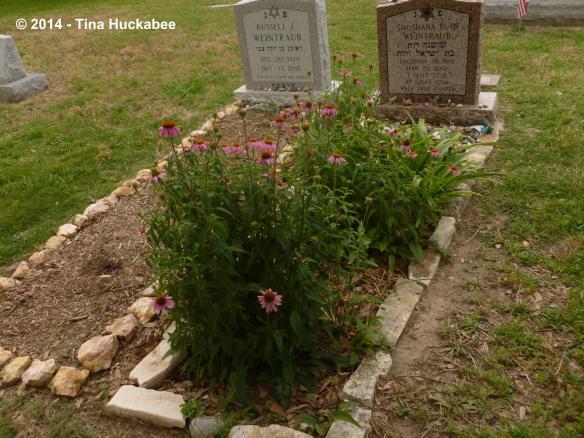 These are the graves of my daughter, Shoshana, and my father-in-law, Russell.  I planted a little garden atop Shoshana’s grave in the year after she died (2006) because I didn’t like the tracks the lawnmowers left on her grave.  I called (at least twice) and asked permission from Austin Memorial Park officials to plant the garden.  I never received a reply. So, I planted.  I’ve tended that grave garden since. I chose the plants for sentimental reasons and also because the plants are either native to Austin or are drought tolerant perennials.  I thought I was doing a good thing.

Russell’s grave is mulched and ready for planting, but no garden exists.  My sister-in-law, Sharon and I were discussing what to plant on Russell’s grave when, in September, quite by accident, a volunteer with the synagogue where I’m a member, mentioned to my husband that everything on Shoshana’s grave would need to be removed.  On Sunday, September 8, I emailed Austin Memorial Park and was consequently forwarded a long list of “you can’t do this” rules.  At that time, we were told the rules had been in force since 2006, but since then, city officials have suggested the rules have been in effect since the 1970’s.  What everyone agrees with though, is that the rules have never been enforced and that those who have buried loved ones have never been informed of those rules.

After Ken Herman of the Austin American Statesman contacted Sharon, myself and others, he wrote several articles about the kerfuffle. A bit of public outcry ensued and Austin Parks and Recreation Department (PARD) delayed the scraping of the graves until November. During  a City Council meeting on October 17, several council members agreed to place a moratorium on any action until “more nuanced rules” could be set in place.  The Austin city council gave PARD six months to develop rules, utilizing citizen input.

On October 24, Austin PARD held a cemetery stakeholders meeting where this issue was allotted a few minutes as the last item on the agenda.  Involving myself in this issue, I visualized a process where city officials and concerned citizens would work together to develop cemetery rules.  The Bureaucrat in charge of Austin Memorial Park (and the meeting) disabused me of that idea at that time.  The meeting was adversarial from the start. Two police officers were posted in the back of the room. Really?  For a general public meeting?  I guess citizens who have loved ones buried at Austin Memorial Park are a particularly scary bunch.  I don’t think there was anyone under 40 at that meeting. I was disgusted at the attitude displayed by The Bureaucrat in charge.  He was dismissive and rude to anyone who disagreed with him.  When asked a direct question, he circumvented the answer.  Several people asked the same simple question, When is our next meeting/where do we go from here?, because he never answered it.   Apparently, he has been adversarial for years.  This was my first experience with this issue and the players involved.  Attendees filmed and recorded the meeting–I remember thinking how odd that was, but by the end of the meeting, I understood.   Having the police officers at the meeting was a clear message: it was meant to intimidate the citizens.  After that meeting and regardless of the City Council’s moratorium, I had no confidence that PARD was going to listen to input from citizens which didn’t jibe with what they had already decided to do.

Except for general email updates (usually only after our request for information), there has been essentially no action toward involving the public in discourse.  From the beginning, the process was behind a wall of city bureaucracy.  There was no action and little communication until toward the end of the six-month moratorium and in March 2014, the city hired a company to “facilitate” discussion.  On April 29, the first formal movement to involve citizen input was announced.   As mentioned,  I envisioned a process in which I, along with other stakeholders would partner with city officials in regular, monthly meetings and work toward developing guidelines, appropriate and fair to all.  Instead, a generic online survey, made available May 1 and which closes May 27, is all the input there will be.   There are two public meetings scheduled over the next few weeks: one is set for June 5 to present the final rules and one on June 18 to finalize those rules.  There is no interim meeting to amend any concerns between the presentation and the finalization of the proposed cemetery rules.   After nine months, the process will be pushed through over a two-week period with little time for genuine public participation.  My initial impressions from that original October meeting were spot on.

There are already some who have exhumed their loved ones’ remains and others who will be doing so because they do not believe the city of Austin and PARD are respectful and understanding of cemetery owners.

There are so many issues with this process that’s it’s hard to know where to begin.

1) My family owns our grave sites; the city of Austin does not own them.  Austin Memorial Park is a  public/private entity.   I don’t believe that I can to anything I want with my private property, regardless of community standards.  But those graves are owned by individuals and as long as what I place there is not profane, dangerous, and is maintained by myself (or my delegates) and I don’t expect the city employees to maintenance the graves, I should be able to place private memorials.

2) There are clear and important cultural differences in how a cemetery is perceived.  Apparently, there were complaints from visitors who walk through Austin Memorial Park (but don’t have loved ones buried there), which may have been the original impetus of the rules implementation.  Some people believe that a cemetery should be nothing but grass and gravestones and that there should be little, if any, personal mementos on graves.  If you read about or visit Mexican or European graveyards, you’ll find a very different aesthetic. In Jewish tradition, we place rocks on graves when we visit–is that going to end at Austin Memorial Park because someone doesn’t think that’s okay?  For those who celebrate Dio de los Muertos, will they no longer be allowed to place items important to their loved ones on their graves?  The placing of flags on veterans’ graves is a violation of the proposed rules.  Will it become a thing of the past to place flags on the graves of veterans?

If you don’t like gardens or toys placed on graves (private property), that doesn’t mean that others agree with you or that you have the right to force your aesthetics.  There are many sweet mementos around this beautiful cemetery. 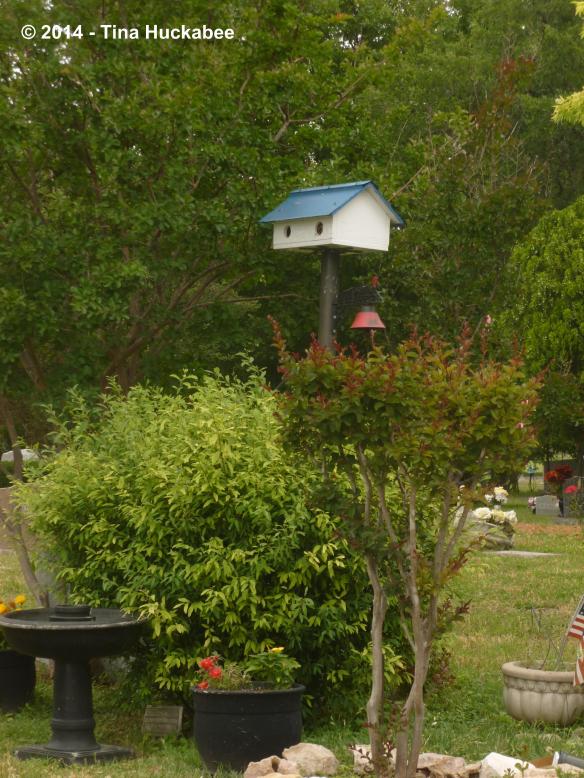 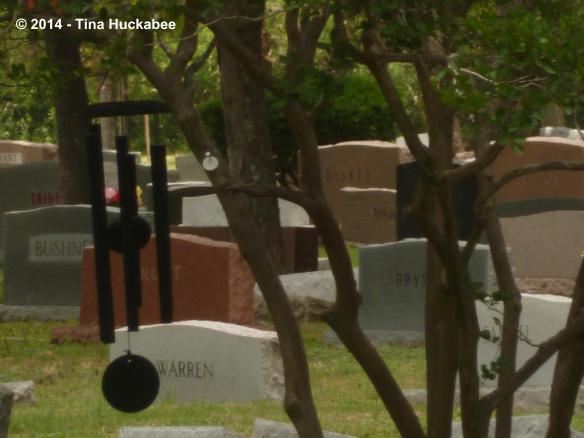 And there are many, regionally appropriate perennials which would be removed.

3) Aesthetics aside, should the city of Austin, which touts itself as a leader in “green initiatives” be planting grass?    And watering that grass with our impending water shortages? And mowing the grass, thus adding more fossil fuels to our atmosphere and ozone?  What if everyone at Austin Memorial decided to do what I did and plant a xeric, pollinator-friendly garden?  Wouldn’t that actually reduce maintenance?  Isn’t that what the city is promoting  for our home landscapes and couldn’t that idea be extended to a large swath of public/private land?  It seems to me that one set of goals in Austin government is deeply conflicted with another.

4) I do believe in rules–I’m quite the rule follower, actually.  I agree that anything which could realistically cause harm to a worker should be removed. Items not placed directly on graves, but left in common city ground and inappropriately or dangerously placed, should be removed.   But one of the examples of banned items are benches.  The city of Austin does not place benches in the cemetery, a place where people go to rest and contemplate.  Therefore many cemetery stakeholders have supplied their own benches.  I agree that if a bench (or anything else) is dilapidated, dangerous, or in the way of workers enough to cause problems,  the city has the right to remove it.  But safe, well-maintained benches are an asset to the cemetery and the rules should allow benches. I am sympathetic with the employees of Austin  Memorial Park.  It’s their job to remove unsafe and long-forgotten items.  Working around individual graves isn’t the easiest task, either. However, Austin Memorial Park isn’t a general use park, it is a place where the people of Austin visit and honor those important in their lives who have died.

It is sacred ground.

5) In Ken Herman’s article in the Austin American Statesman on Saturday, May 24, the PARD official mentions how much money has been spent to bring the process to this point. Your tax dollars paid for the “facilitator” and this waste of money could and should have been avoided.  A once-per-month meeting, consisting of a panel of city employees and concerned citizens would have been more fitting for this sensitive issue.  That is what I thought would happen.  Silly me.

Perhaps a better use of those tax dollars could have been to pay PARD employees to pick up trash along the green-space of our filthy roadways.  (Has anyone else noticed how dirty Austin roadways are?)  Or, maybe they should be employed to remove the bastard cabbage (and other invasive plants) which are infesting our green spaces and replace those invasives with our beautiful, native wildflowers.  Lady Bird must be turning over in her grave.  (Glad she’s not buried at Austin Memorial Park.)

Or, maybe they could be paid to fix the wonky fence around Austin Memorial Park.

5) Why has this taken so long?  PARD wasted the six-month moratorium and now wants to cram proposed rules through within the next three weeks.

I know this is a rant.  I’ve been stewing about this all week and I’ve believed from the beginning that PARD was not serious about working with citizens to develop “nuanced rules.”   I hoped to partner with city officials in regular, monthly meetings to develop guidelines which were appropriate, fair and reasonable. But from the beginning, city bureaucrats shrouded the process and blockaded true public input.

If you want Austin to maintain some semblance of a creative, richly diverse community which promotes individuality, please lend your voice by answering the online survey at:

Many, many thanks to Ken Herman for his perseverance with this issue. 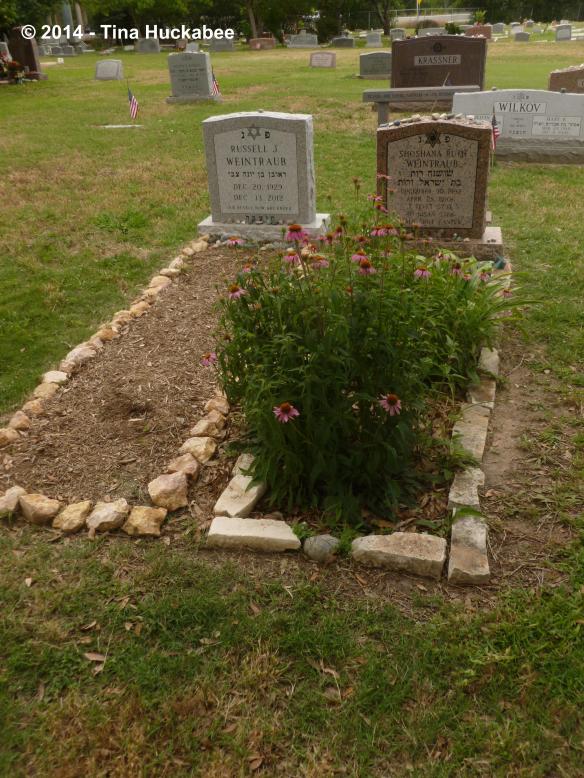 20 thoughts on “Only The Dead Listen”