I don’t know the true name of this iris. These plants (or more accurately, their ancestors), were in a small garden along the driveway when we moved into our home in 1985.  I was 25 years-old.  Was I ever that young????

They were nicknamed ‘Shoshana’s iris’ by Pam of Digging.  She dubbed these ‘Shoshana’s’ sometime after my 13 year-old daughter, Shoshana Weintraub suddenly died.  Shoshana died in April 2006 while on a Kealing Middle School band trip to Chicago.

I don’t specifically remember giving Pam any iris, but over the years, I separated them, moved them around and gave them away to many people. I gave some years ago to my mother in Corpus Christi, but the iris didn’t thrive in her sand and humidity.  Several of my neighbors have grown these lovelies in their gardens for years.  And Pam, in turn, has shared them with other gardeners outside my immediate circle.    Diana, of Sharing Nature’s Garden, recently profiled her ‘Shoshana’s iris’ in bloom, given to her by Pam.  So, it’s nice to know they’re out there in the world, blooming. And it’s even sweeter knowing that many gardeners call them ‘Shoshana’s’.  Any opportunity for Shoshana’s name to be spoken in the universe, is a good thing–whether in the guise of a beautiful flower or someone remembering  what a lovely gift my Shoshana was.

The color of this iris is richer than lavender, but not a true purple.  Lilac?  Okay, I’ll go with that, although to me, it is a deeper hue than lilac.  The fragrance is cloyingly sweet, but then, that’s what iris are supposed to smell like.  And it sports the signature ruffles common to iris. 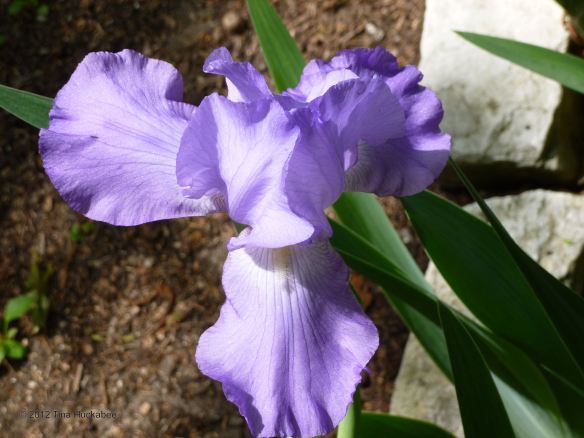 I recall reading in one of Pam’s posts about this iris, and Pam called it “temperamental.”  I never thought of it as that, but it’s true that isn’t showy every year.  I often have a tinge of jealousy when I see another gardener’s ‘Shoshana’s’ blooming well (like Diana’s, this year), when mine are not.  This spring, I had only one stalk, with only four blooms. My other established iris bloomed beautifully, though.  I’ve observed over the years that this iris blooms less frequently than it once did.  Is it because of our generally warmer and drier climate this past decade or so?  Perhaps.  I know that it use to bloom, reliably and prolifically, every spring. Like most iris, it blooms best given more sun, but several of mine are in spots of dappled light to part shade–including the one that bloomed this year.

I enjoy the straps though, throughout the year; they add vertical, evergreen punctuation in clusters throughout my gardens.

Bloom time for this iris has passed, so ‘ll have to wait until next spring, once again hoping that ‘Shoshana’s iris’ will grace my gardens with its large, dramatic blooms.

The name Shoshana means lily in Hebrew.  My Shoshana loved Purple Coneflowers–she thought they were “happy” flowers.  In a little garden atop her grave, surrounded by Texas limestone taken from my garden and accompanying her Texas pink granite headstone, I planted Coneflower and several lilies–some Crinum lilies (unknown name) from my parents’ garden, Oxblood Lily (Rhodophiala bifida) and Red Spider Lily (Lycoris radiata) from my own gardens.

There are no ‘Shoshana’s iris’ on Shoshana’s grave.