My gardens haven’t experienced much of a freeze here in central Austin thus far-just a few light frosts.  Even so, there’s not much in bloom with the short days and chilly weather. Here’s a peek of what’s blooming in my part of the world in celebration of Bloggers’ Bloom Day, hosted by  Carol at May Dreams Garden:

Two views of two blooms on the lovely and talented Globe Mallow (Sphaeralcea ambigua).  I’m smitten with the salmon color of the flowers and the sage green, frilly leaves.  It blooms best for me late winter/spring with fewer blooms in the summer/fall. 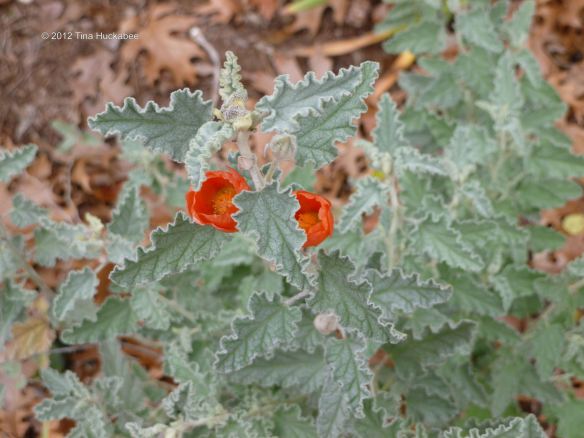 There are still several blooms left on one of the Firecracker Ferns (Russelia equisetiformis).  Some suffered freezer-burn during the light freezes, but not this one by the pond. 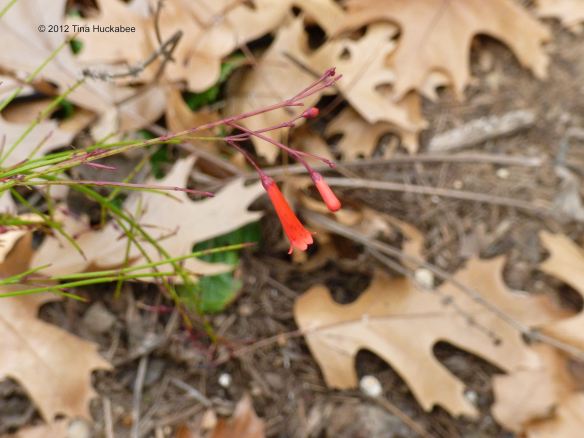 One stand of Goldeneye (Viguiera dentata) still in bloom.  Half the plant shows freeze damage, the other half is in bloom.  Go figure.

There are two Purple Coneflowers (Echinacea purpurea) in bloom. Interestingly, they are situated beside the Goldeneye.  Is the soil especially good there?  (Not that either of these plants care much about soil type.)  Or are they protected from the little bit of cold we’ve had because they’re beside the driveway/street and  benefit from warmth of the asphalt?  Probably, but who knows…. 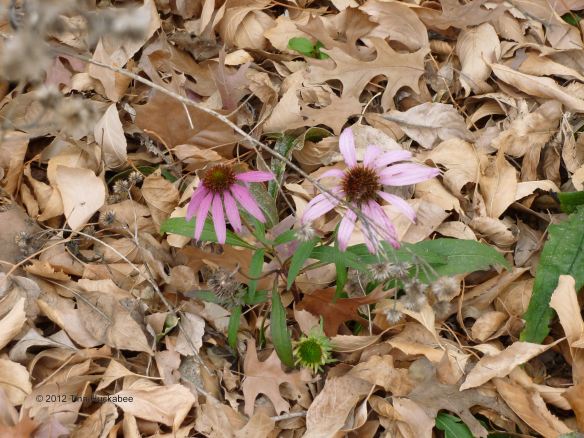 Also by the street, one group of Turk’s Cap (Malvaviscus arboreus), with its one bloom.  Glad it’s still around–I hope any over-wintering hummingbirds know to locate it. 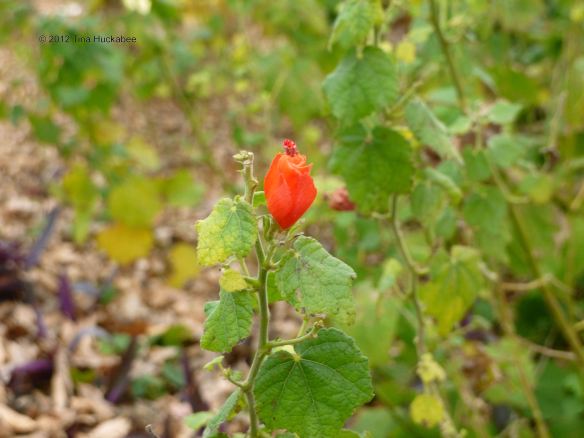 I’m so excited to see a lone, open bloom on my native Coral Honeysuckle (Lonicera sempervirens).  There are others that will open soon.  This little dude is at the bottom of the vine.

Another “lone,” this time in the form of a Columbine (Aquilegia chrysantha).  I’ve seen blooms on Columbines before during the winter (they are a cool season plant), so I’m not shocked to see this one.  It’s on the plant where I observed two blooms back in October, which is very unusual.  I hope it’s getting prepared for its big show in spring.

And finally, there are still a few little blooms on the Blackfoot Daisy (Melampodium leucanthum).  Love, love, love that plant!

I’ve also discovered the beginnings of some blooms on my Barbados Cherry (Malpighia glabra)–if we don’t have a hard freeze in the next week, they’ll be in bloom too.  Wow!

I guess it’s not so skimpy for January.  What’s blooming where you live and garden?