I’ve recently rid myself of the last remaining turf on my property by building a pathway where the grass was.  It’s easy to lay a pathway, especially if the topography is flat. Adding a pathway is also a good way introduce structure to a garden.  A defined pathway gives visitors a specific route for meandering a garden space.

When we built our pond three years ago, we placed it within the border of an established, large perennial garden and adjacent to the remains (swing beam and pea gravel) of the kids’ play-scape.  We hung some nice hammock chairs so that we can sit by the pond and enjoy the fish, flowers and sleep.  (Inevitably, that’s what I end up doing when I sit there and (ahem!) read.)

Because I haven’t been able to decide exactly what I wanted for the pathway, I left a (roughly) half-moon shaped patch of mostly Bermuda grass which leads  from the patio/archway to the sitting area by the pond,

and then onto the next walkway/mulched area. 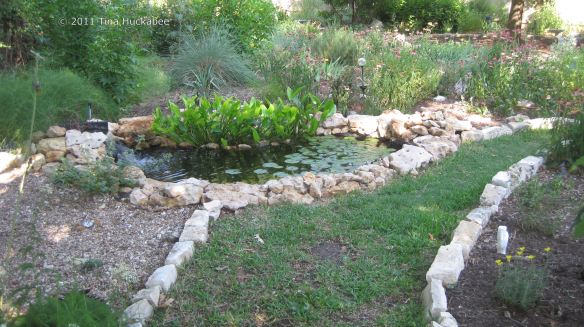 Other than occasional hand and automatic weed-eating at the border of the pond and gardens, I haven’t done anything to maintain this grass area.  After the Summer From Hell of exceptional drought and almost 100 days of over 100 degree temperatures, coupled with no additional irrigation, the grass died. 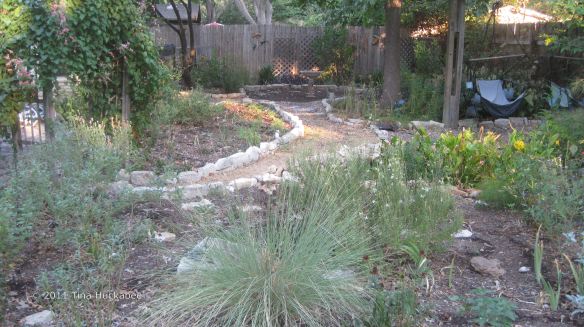 It’s time to build a pathway–I just have to decide what my building material will be.  So…mulch?  Or gravel, (pea or larger?)?  Crushed granite? Or City of Austin crushed, recycled glass?

I prefer mulched areas because I like to walk barefoot and I don’t mind walking on mulch, plus I like the warmth of the earth tones in a landscape.  But I have two large mulched areas already and want something different.  Plus, my sweet dog loves to roll around in the mulch and I have enough problems with indentations in the mulched soil from his back-scratching antics that I don’t want to give him more opportunities to dirty himself.  (More on that in another post.)

I love the look of crushed granite, but I don’t like walking on it barefoot and the dog is still going to roll in it, so no solution there.  And as beautiful as recycled glass is, I don’t think it’s practical for a walkway where we’re going to be barefoot.

Gravel it is!!  I like to walk on pea gravel (feels good on the feet!) and the area where the play-scape was/hammock chairs are, is covered with pea gravel, so this choice simplifies the layout of this area.  My original plan was to have something other than pea gravel for the formerly grass area, but I prefer to keep the lines simple and pea gravel fulfills that desire.

The downside to using gravel is that it will be hot in the summer from about 10 am to about 3pm because of the direct sun.  The area is mostly shaded after that and gravel cools quickly, so other than a few hours during the day where it will be necessary to wear shoes, it won’t be a difficult place in which to walk.  Another related problem is that  the heat generated from the rock might contribute to some evaporation from the pond.  However, I don’t think the evaporation will  be that significant

This was an easy project to complete.

1) I hand pull and weed-eat remaining grass (which there was not much of) and start laying  weed-block.

2) My weed-block of choice has always been newspaper.   I use fifteen layers and overlap the sheets so that the more ambitious weeds can’t get through.  It’s best not to do this on a windy day….

3) I have to excavate about four square feet along the pathway, just past the arch.  That area is flush with the river rock and an embedded stepping stone under the arch.  I don’t want to add weed-block and pea gravel directly adjacent because it will be higher than the stepping stone and that won’t work.

4) I dig out the soil with a sharp-shooter and use the straight-edge of a hoe to even the soil and keep the slope consistent.  I excavate about three inches deep, for about one and one-half feet in length, gradually sloping upward to the top of the soil where it meets the remainder of the established path.

5) The remaining pathway is bordered by five-to eight inch high limestone chopped rock and the ground is flat, so I can simply add weed-block and pea gravel directly on top of the soil.

6) I open bags of pea gravel and pour.  The total pathway area is about twenty square feet, so I purchase individual bags from a nearby nursery.  If it was a larger project, it would be more economical to order gravel from a local landscape supply company.  Except for the excavated area (where I use three and one-half inches of gravel), the pea gravel on the pathway is two and one-half inches deep.

I complete one end, 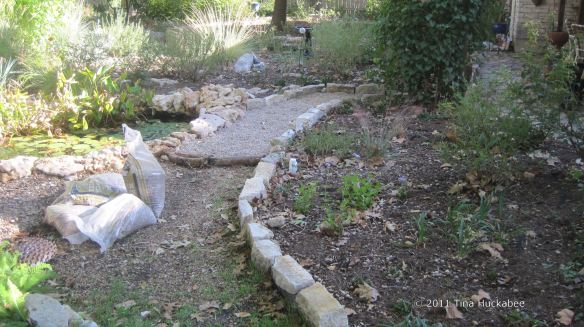 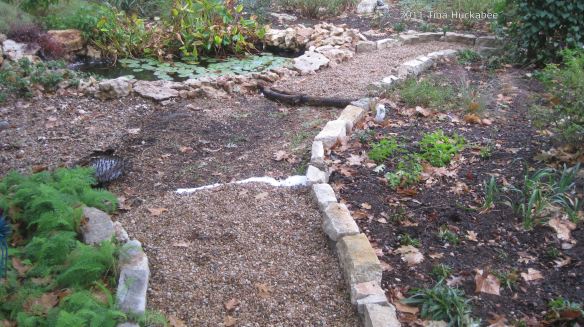 Finally, I finish the whole deal! 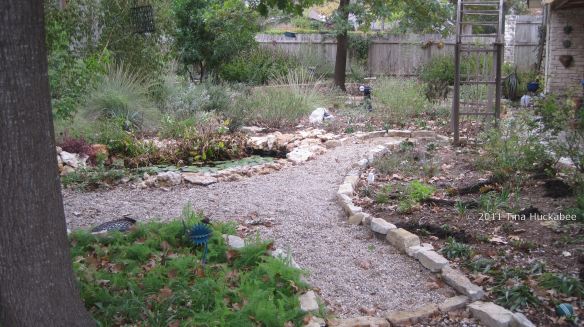 I built the pathway in two or three afternoons, working for an hour or two each, as I had time.

No more grass!  Just nice pea gravel that requires no maintenance and that feels good on the tootsies.  The dog can roll around in it (it’s become his favorite spot) and all it needs is the occasional rake pulled over to keep it level and tidy.

Now it’s time to clean up the billions of Red Oak leaves which are currently falling to the ground and covering everything.  Ugh!

4 thoughts on “Kiss My Grass…Goodbye”