In my post, Cast Iron Crisp, I discussed how one stand of Cast Iron Plant (Aspidistra elatior), in my gardens, suffered leaf burn this past summer. 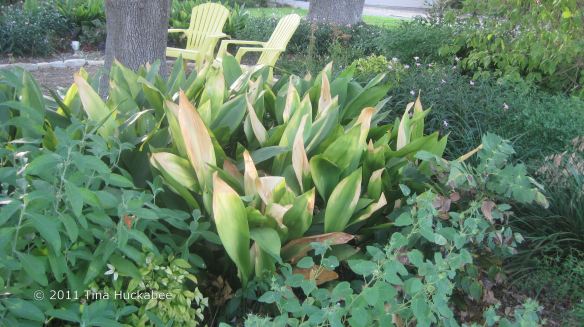 The plants have been in that spot for more than a decade and have never had this sort of damage.

The garden receives dappled shade most of the day, until the late afternoon blast of hot, west sun.  The plants that are in front and to the side  of the Cast Iron are all sun lovers and thrived with no ill effects from the exceptional drought and heat.

My assumption about the damage this year is that it was caused by the extremely hot (more than 70 days above 100 degrees) temperatures that Austin experienced during summer 2011.  Originally, I planned to prune the Cast Iron in winter and observe what happens next year and if it is as hot again and similar damage occurs, I would replace the plants.

I can’t wait that long.

So, once I’ve dug out the sun-burned plants, what do I replace the Cast Iron Plant with? 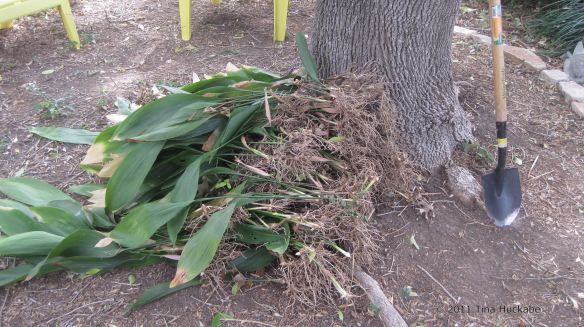 I wanted something that I don’t already have, that can take mostly shade, but won’t burn up with the death rays of the west sun and something that won’t need much water, given the very real possibility of Stage 3 water restrictions in the foreseeable future.

I love the native red Turk’s Cap (Malvaviscus arboreus) and have many of those shrubs in my gardens. I used to have a White Turk’s Cap and enjoyed it as well, but  moved it and it didn’t survive its transplantation.   I’ve never been quite as enthralled with the Pam’s Pink Turk’s Cap (Malvaviscus drummondii ‘Pam Puryear’), although I’ve grown to like it more after observing it at Zilker Botanical Gardens (in the Butterfly Garden) and in private gardens around Austin.  According to those who grow it, it’s as hardy and xeric as the red Turk’s Cap. So, I decided to try two Pink Turk’s Cap as the replacements for the fried Cast Iron Plant.

I laid out the exact spot where I want the Turk’s Cap  and adjusted the soaker hose to pass over the root zone of each plant.

Because it’s late in the growing season, I opted for gallon pots each with a large root base  to better ensure survival odds through winter.  At maturity, these two plants should be four to five feet tall.

Viewing from the street (toward the tree), the Turk’s Cap will fill in the space behind  the Mahonia (Mahnonia repens) and in front and to the right  of the Cast Iron, thus shading the remaining Cast Iron Plant from the sun during the hellish summer months.  The small Giant Lirope (Lirope muscari) in the front/center of the photo, is a transplant from another part of my garden and will eventually be about three times its current size.

Viewing from the tree side of the garden (toward the street), a seedling Chile Pequin (Capsicum annuum var. glabriusculum), is to the right of the Giant Liriope and left of the Mahonia and will fill in the area in front of where the Turk’s Cap is planted. 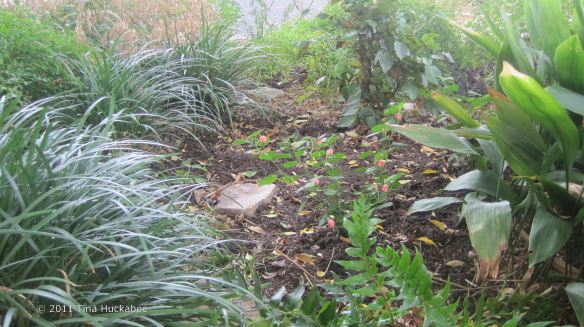 I opted to leave the section of Cast Iron Plant which was not sun-damaged. 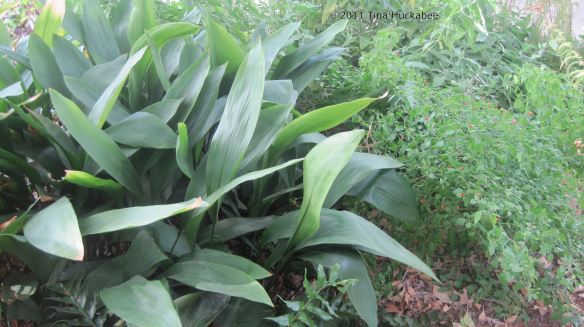 I think this is a good solution to the Cast Iron sun-burn problem.  My greatest concern  is planting during the  continuing drought.  My hope is that I’m ahead of possible severe water restrictions with enough time for the xeric Pam’s Turk’s Cap to establish itself.

Wish them (and me), good luck.  And, think about what you can do to replace drought/sun damaged plants, inappropriately placed, with better suited options.