No, there isn’t a mob in my garden; no large group of kangaroos have arrived for March in my garden. But there are lots of Cedar Waxwings.  Lots and lots and lots. A migratory bird that winters in Central Texas, the Cedar Waxwing, Bombycilla cedrorum, is gregarious, always as a part of a group, rarely seen alone.  In the last few days, I’ve had more of these birds visit en masse than ever before.

I usually hear them before I see them as they’re rapid, high flyers, and they whistle while they work. 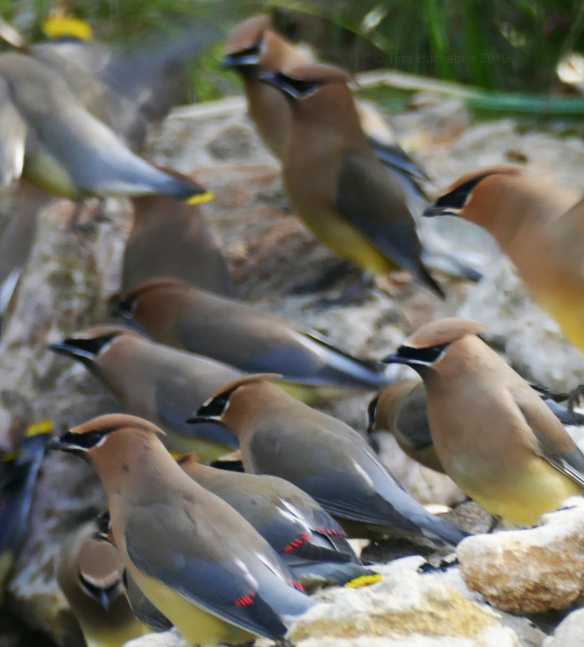 Typically, I see dozens at a time, flying from treetop to treetop in flocks of 10 to 30, vocalizing with their signature shrill calls, flitting in to settle along the branches of my trees,  and maybe, contemplating a dip in the pond. As a group, they’ll swoop down to take the bath and also grab a drink while they’re at it.

Recently, their numbers are in the hundreds and they’re certainly making their presence known:  garden feature-hopping, whistling as they go. 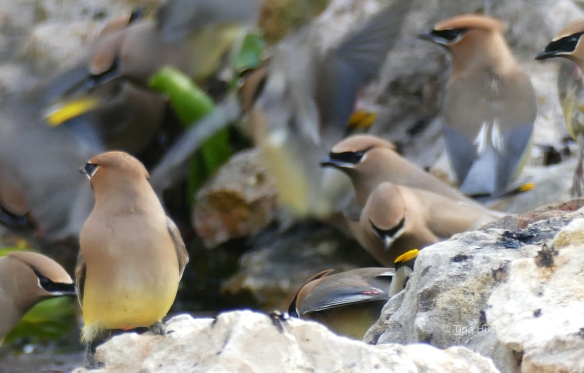 This little group (fella at the left notwithstanding–he’s telling the others how it’s done) are head-down, front-facing as they drink from the bog. 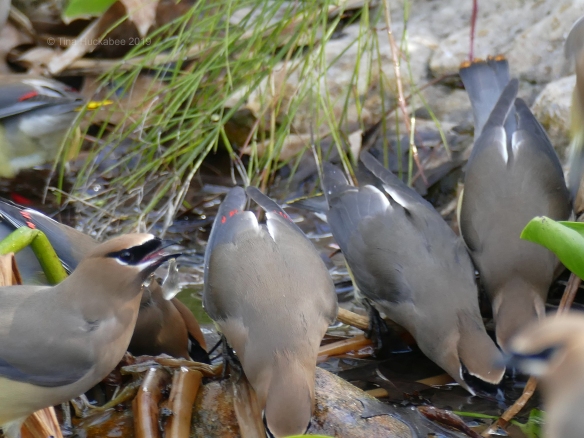 And this group, not wanting to follow along with the crowd, strike a similar, but different pose:  head-down and tail-facing. 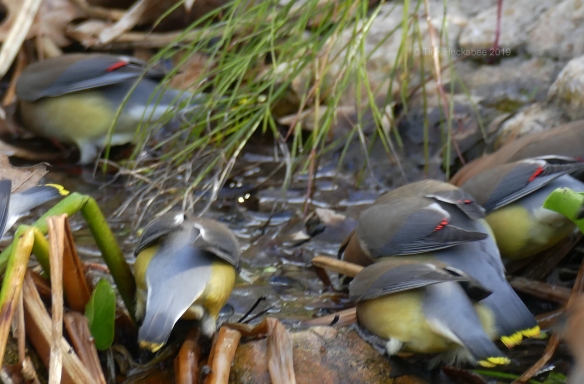 I wonder if this waxwing is engaging its partners in conversation as to whether front-facing or back-facing is best. 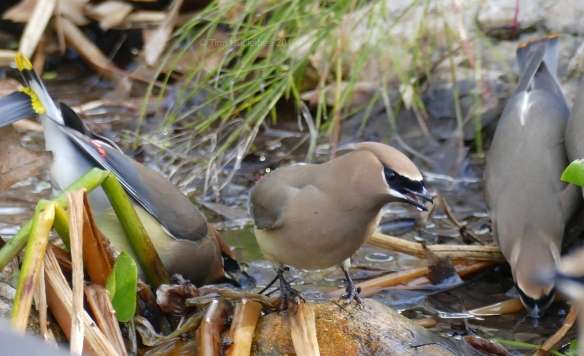 Cedar Waxwings are stunning birds.  Soft and elegant tan-to-grey colors their back and wing feathers, morphing to butter yellow bellies.  Dramatic black masks which are rimmed in white, accessorize their jaunty faces.   Atop their lovely heads is a crest, but often it lies flat. 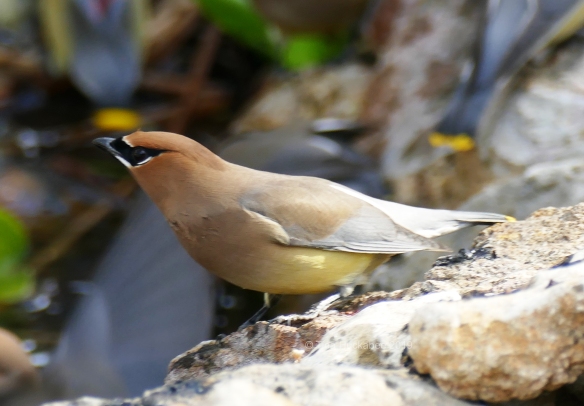 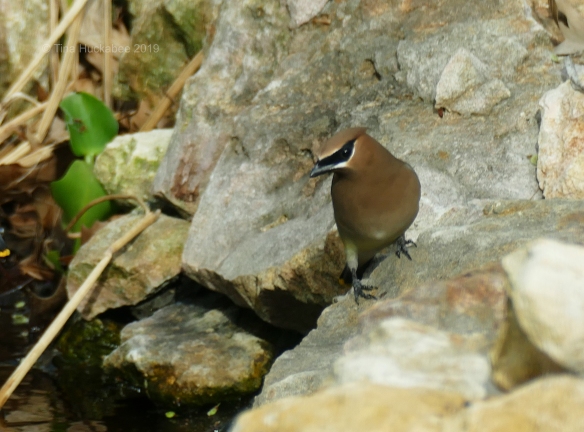 The name ‘waxwing’ comes from the brilliant red tips at the ends the secondary flight feathers, which may be related to attracting mates.  Not all waxwings have these red tips. 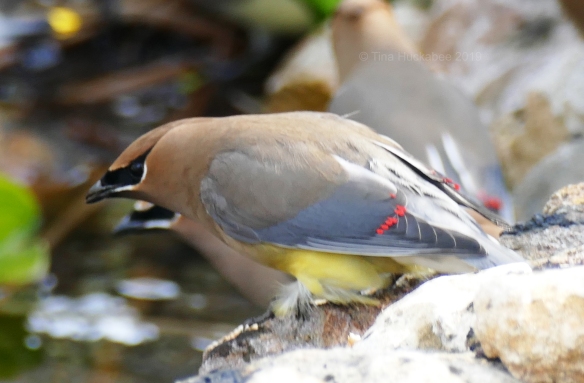 The tips of the tail feathers are bright yellow, a well-appointed echo of the yellow belly. 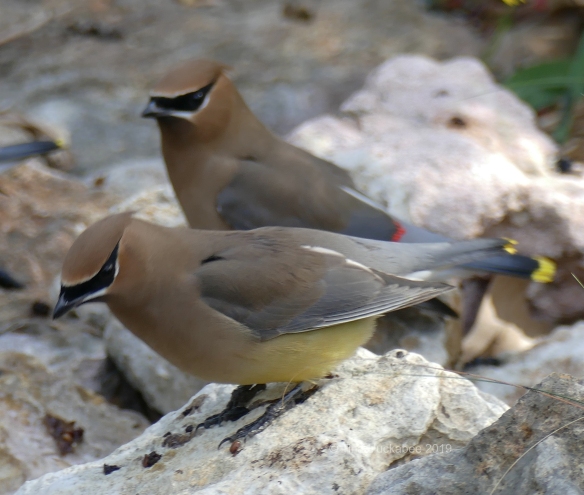 When I first downloaded the photos of these merry birds, I noticed that this individual, 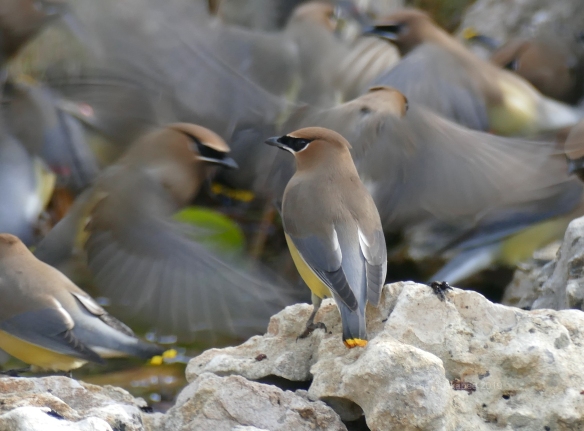 …appears to have orange, rather than yellow, tail feather tips.  If you click on the Cornell Lab of Ornithology link at the beginning of the post, under “Cool Facts” there is a mention that starting during the 1960s, it’s been observed that some birds in Canada and the United States sport orange, rather than yellow, tips on the tails.  Apparently, if a waxwing eats berries from a certain non-native honeysuckle during growth of the tail feathers, the tip will be orange.  Cedar Waxwings winter here and southward, but they breed and raise chicks in the far north of the U.S. and well into Canada, so this orange-tipped Cedar Waxwing must have come across the honeysuckle berry at some point during its adolescence.

Photos don’t adequately capture the exuberance and energy of these flighty birds as they whoosh to the pond from the trees and flap in the water with verve.  Always on the move, they regularly change places and positions with one another, chatting all the while.

Back and forth they go–tree to pond, pond to tree–eventually settling together along limbs, sociably fluffing and drying with their comrades. 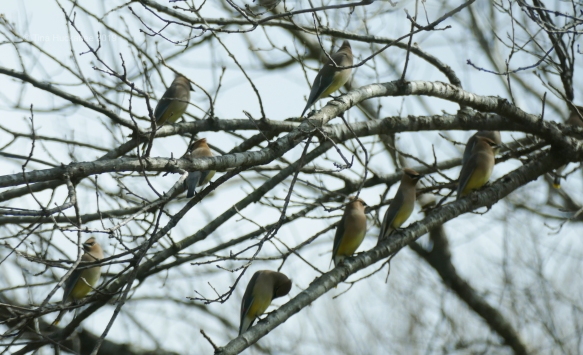 Then, at some signal I’m not privy to, they dart away with wings aflutter and calls sharp.  Sometimes they circle round again, not having had quite enough of my garden’s offerings, but often, they fly away–as a mob–to their next adventure.

Cedar Waxwings enjoy perching in the trees.  They like to preen and look pretty, and it’s a good time to get a quiet shot of these beauties.  Catching one alone?  That’s a real feat. 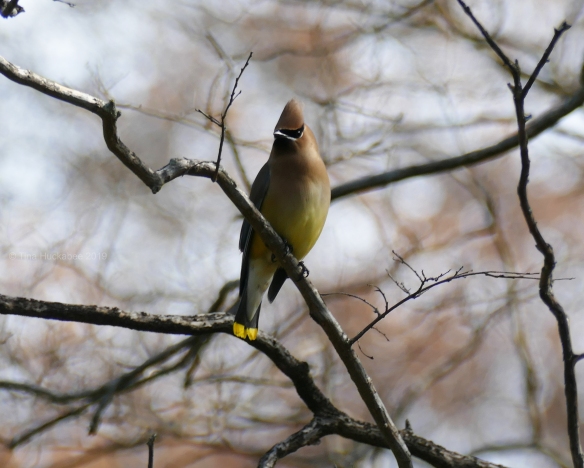 Eating fruit almost exclusively, when they decide that it’s time to for a meal, a group of Cedar Waxwings will strip a tree or shrub of berries in a matter of an hour or two.  In my own garden, they eat the berries of the native Possumhaw holly, Ilex decidua and the non-native Burford holly, Ilex cornuta.  I’ve never witnessed it, but many folks in Austin (and elsewhere, I’m told) report seeing drunk Cedar Waxwings after consuming overripe berries.  Tipsy birds might seem comedic, but in fact, waxwings can die because of fermented berries.

Here’s another, less dire, but still obnoxious, result of the berry diet.  Do you see it? 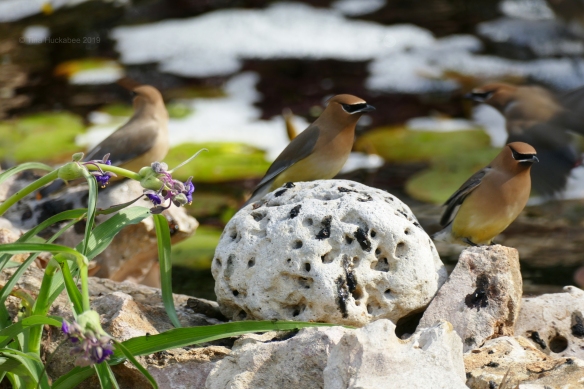 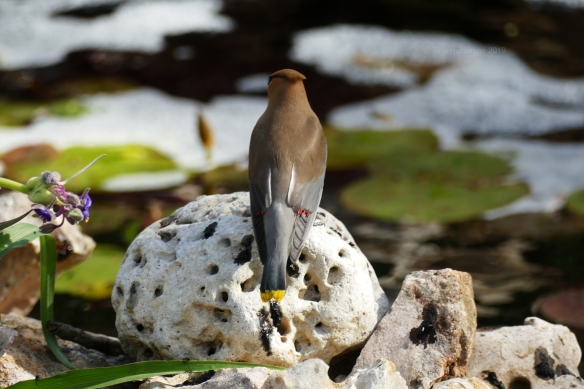 These rocks are not polka-dotted, they’re bird poop-dotted, as is a good portion of my back patio and several walkways in my neighborhood.

Perhaps when I’m out, I should don a hat.

Despite the less-than-appreciated output of these birds, I’m thrilled at their visits in winter and early spring. Their high-pitched calls from the sky, their penchant for companionship wherever they go, plus their gorgeous good looks, brings cheer my heart and a smile to my face. 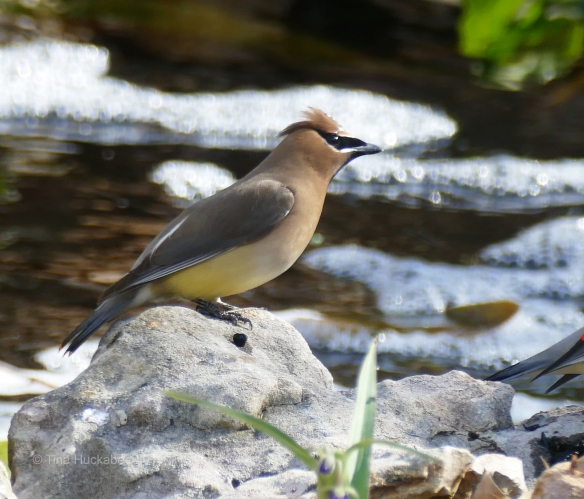