How are your honeybees, Ms. Bee Mama?  Why, thank you for asking!  Scar, Buzz, and Woody are doing just fine, thank you very much. 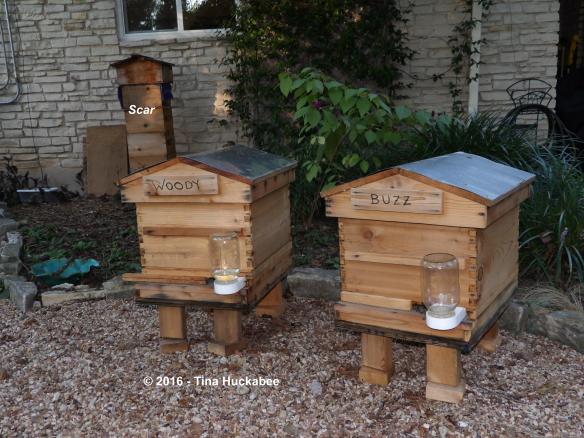 I haven’t reported much on my three hives recently, but all are buzzing along: the  forager bees are reaping the bounties of the garden, 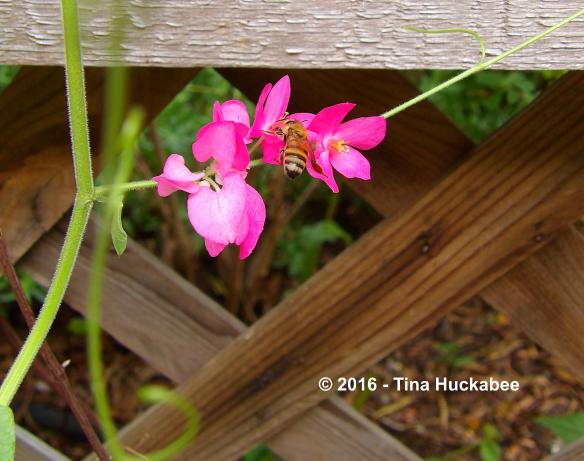 …the other bees are tending to their chores,

…and their queens are laying eggs and keeping up their part of the operation.

It has been an interesting summer with our hives, having hived Buzz and Woody in early June, a little late in the season.   Both of these new Langstroth hives are progressing nicely and are certainly easier to work with than Scar’s Warre hive.  However, in early August on a hot and humid Sunday, I noticed that Woody’s queen had escaped her hive and was crawling along the ground, with bee attendants closely following.   Workers swarmed out of the hive to find their queen when she left, and then back in again when  we caught her and delivered her into the hive.  This happened several times that day and after the last great escape, we installed a queen excluder at the bottom of the box.  A queen excluder is a meshed, usually metal, sometimes plastic, grate that is placed between bee boxes so that the queen can’t move into a new box.

Bee keepers use queen excluders when they want a box that’s purely honey and comb, but no brood.  The queen is larger than the worker bees, and the excluder is designed so that she can’t crawl through it, but the workers can.

Scar, the Warre hive, utilizes bars rather than frames. We placed the bars in the fourth box, and it on top of the queen excluder.

In this photo you can see a Langstroth excluder placed between the third box and a new, fourth box of Scar’s Warre hive.

Scar is thriving and all three bottom boxes have brood, so we’ve decided to let the workers build comb and make honey for winter, but not allow the queen to lay eggs in that fourth box.  You’ll notice that the excluder doesn’t fit Scar’s Warre hive–it’s too big.

Back to Woody.  After the repeated queen escapes that fateful Sunday, I glanced out  my bedroom window the next evening and to my great surprise, saw a swarm of bees. The swarm congregated along the underside of a wooden structure, placed near the three hives, but supporting a shallow water pump/pan mechanism which was supposed to attract hummingbirds.  (As an aside, the hummer water feature was an abject failure–at least as far as the hummers are concerned. The honeybees were enthralled, though. ) I’ve read how to capture a swarm, but never needing that particular knowledge or skill set, I wasn’t quite what sure the swarm-capturing steps were.   It was near to sundown and Bee Daddy wasn’t home to confer with in person, so I called and had him Google “catching a swarm” while I donned the bee suite, mixed some sugar-water, and gathered my tools. After a quick phone tutorial, I caught my first swarm!!

A honeybee swarm is the method by which honeybees hives reproduce.  A swarm includes a queen and many (as many as half) of the workers of a hive, and they seek and find a new home.  Many folks are freaked out by swarms, because they view them as scary, but in reality, swarming is when honeybees are at their gentlest and most docile: they have no home, nor brood, nor food stores to protect–they’re just hanging out with their queen, chillin’.

I lightly spritzed the cluster of bees with sugar-water mixture and brushed the clumps of bees into an unused bee box.  I placed a lid on the box and left the box next to where the swarm congregated so that any stragglers left outside could find their way to their new home.  I said a cheery night-night to the newly housed bees.

In addition to swarmed bees, Woody had few bees in it, so it makes sense that it was actually Woody’s bees who swarmed and not some rogue group from somewhere else.  I don’t know to this day whether the swarm was Woody’s workers and the old queen (who was unnaturally crawling around on the ground) or if the bees made a new queen–which honeybees will do if the queen is weak, sick, or dead.  I never saw any queen cells in the hive (they look different from regular capped brood cells), but it’s always possible that we missed one.  I don’t think it was the old queen who led the swarm, because she waddled away, with one or two attendants and I didn’t see her again.  Regardless, early the next morning, we transferred the swarm to the empty Woody hive.

I placed 4 bars for comb-building in the hive and dumped the cluster of bees in the area left open.  We closed Woody and Bee Daddy and I whooped! and congratulated ourselves on a well-housed swarm.

Except, we messed up.

We should have reopened Woody within 24-48 hours and placed more bars, or better yet, frames with foundation, to fill the entire box, but…we didn’t.  We totally forgot that honeybees build downward and will do so, from whatever surface is handy. Two weeks later, during a regular hive check, we realized that Woody’s bees were happy and healthy, had built gorgeous comb, had a great queen laying eggs, and diligent workers making honey. But there was a glitch:  Woody’s bees had built the comb (with honey and larvae) on the underneath of the lid, NOT along the 4 original bars where WE would have preferred them build. 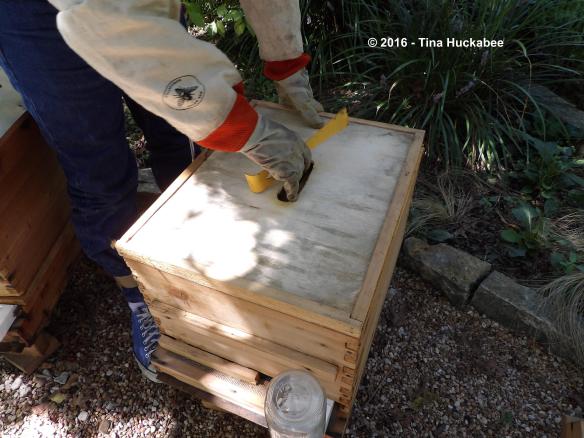 This lid belongs to Buzz, but Woody’s swarm built their comb hanging from the underneath of its lid.

Ooops!  We forgot to make our wishes known and didn’t send out the memo about where we wanted the ladies to build comb.    If we’d reopened shortly after hiving and added the rest of the frames, the busy bees would have built on the frames, not the lid. This wasn’t the bees who screwed-up–it’s squarely on us.  The humans.

A decision of one of two choices was at hand:  we leave their (to our minds) miss-placed comb and never extract honey or conduct hive checks in a reasonable way, or we scrape off the comb and fill the box with full foundation frames.  The second choice would mean that they would have to start over.  Again.

We scraped the comb off the lid, added new frames to fill the entire box, then left that comb on top of the frames, because bees will re-use everything, except wax, to build new comb.

Part of our move to Langstroth hives is that  instead of using simple bars for the bees to build their comb from (like those in Scar) we’re now using full frames, with foundation. Foundation is honeycomb which is fortified with wire and fitted into the frames, so that the bees can build their own comb more quickly directly on the foundation. 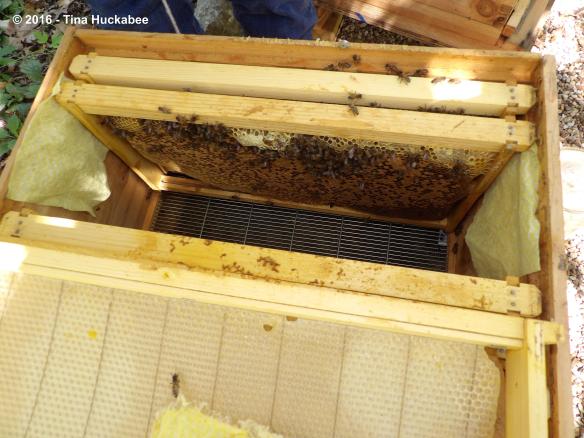 As of early September, in Woody there are only two full combed-out frames with honey and larvae, and another partly built out.  All seems well, though: the queen is laying eggs, brood is developing, and the foragers are foraging. All of that bee drama has meant that Woody is behind in her development.   Woody is a small–and therefore, vulnerable–hive as we head into autumn and winter.  I’ll continue feeding Woody (and Buzz, too) for the foreseeable future to help them along.

Buzz is flourishing with 7 of 10 frames completely combed out.  There’s lots of brood and some honey stores–in short, an active and healthy hive.

The “clean” wood is currently un-used by the bees. 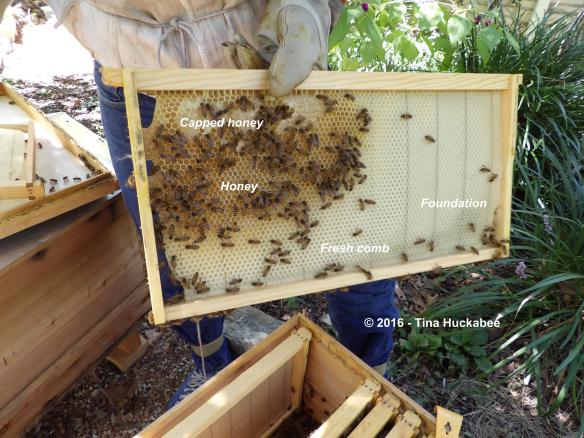 Scar the Warre hive is strong,  as is evidenced by our need for a fourth box.

My biggest concern with Scar is that it still hosts those nasty demons–small hive beetles. We add fresh Beetle Bee Gone cloths, which is a non-chemical beetle control, each time we check the hives in the hopes that the cloths will ensnare the beetles and keep the population controlled. 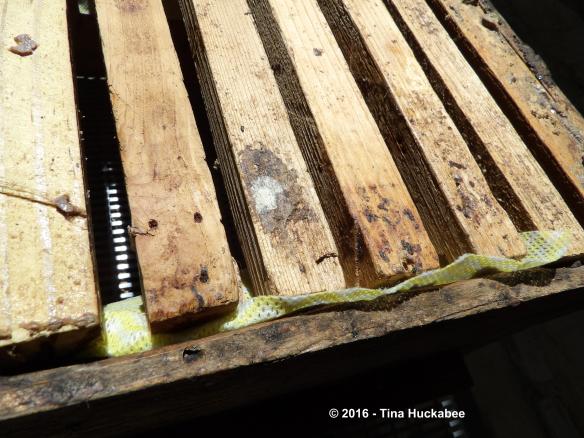 The bees chew the cloths, which makes them (the cloths, not the bees) fuzzy, and the beetles get caught in the fuzz.  If there’s any justice in this world, they die a miserable death.

A partially used Beetle Bee Gone cloth on a frame with foundation.

The method is working in the two Langstroth hives–which have few beetles, many caught in the cloths.  Unfortunately, Scar is still  plagued by beetles crawling rampant, as it has been all summer.  We’ll keep tabs on Scar, but it’s a robust hive and the beetle population should decline with cooler weather. 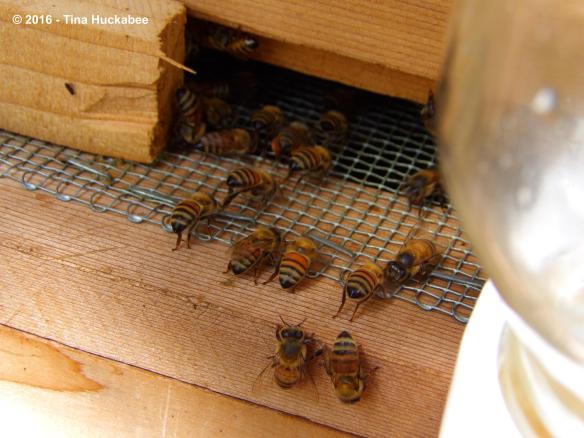 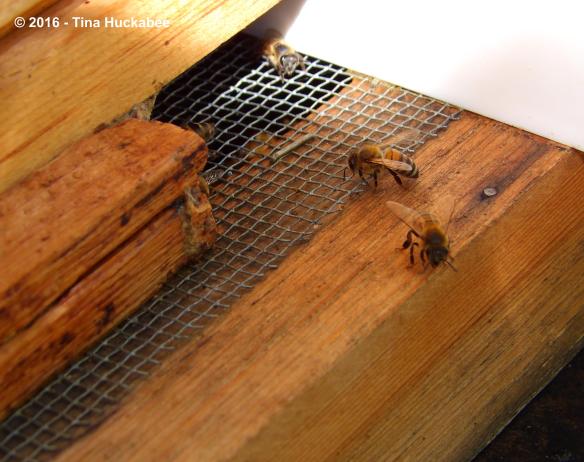 I’m glad to know them. 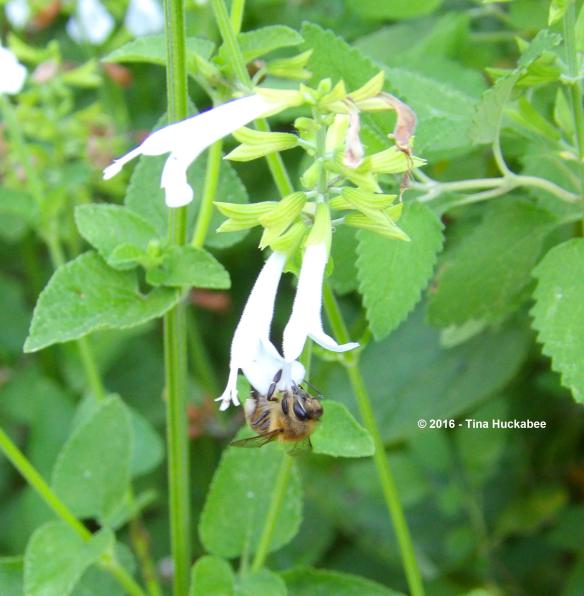