Owlets keep us on our toes.  I missed documenting the appearance of owlet #3 (Frankie? Franky?) on Monday (5/2) evening at the nest box hole, though I saw him/her poking out his/her head briefly when I arrived home in late afternoon.  I intended to take photos, but due to blogger incompetence or distraction by something shiny, no captures of the newest neighborhood raptor ensued.

I figured Mama and Daddy Owl would successfully usher Baby Owlet into their world of dark, trees, foliage, and mice during the night.

At about 6:30 Tuesday morning–the alarm was up, but we weren’t–there was insistent doorbell ringing and a frantic neighbor who’d been awakened by scuffling noise at her bedroom window and a little owlet staring at her in her jammies.  (The neighbor was in her jammies, not the owlet.) Pre-coffee, my husband and I grabbed necessary items–clothes, camera, gloves–and met with the neighbor in her back yard to commence the Great Owlet Rescue.

A darling, but not happy owlet–Frankie(y)(?)–was sitting on the grass.  Mama was nearby, watching with steely eyes, as I gently picked Baby up and placed the forlorn fuzzball in a low crook of a large ash tree. 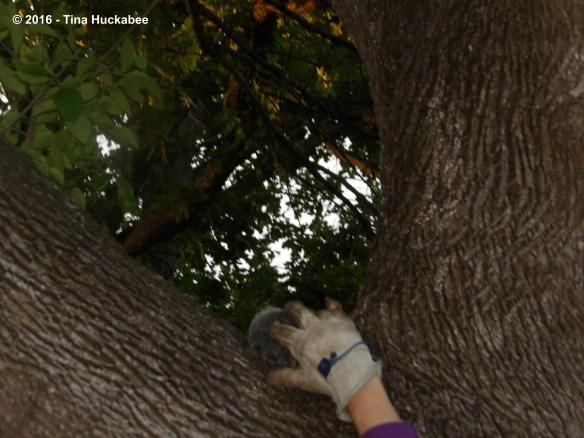 Daddy Owl flew within about 12 inches of my unprotected and early morning face and glared at me as I verbally assured him that I only wanted the best for Baby Frankie(y).

I don’t think he was assured at all.

Baby Frankie(y) sat, confused and bummed, in the tree for a brief period. 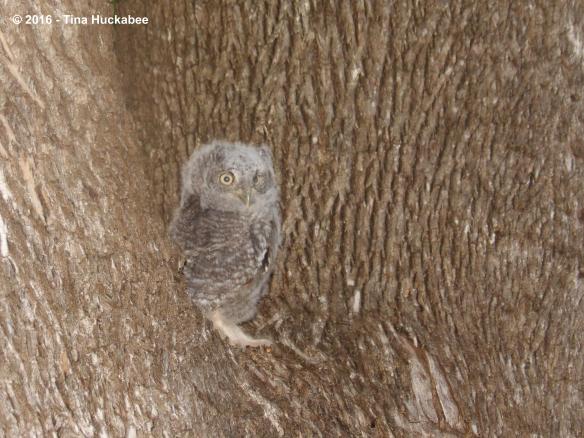 Very brief.  Baby fluttered to the ground almost immediately and three inept humans tried several more times to keep the owlet in the tree, admonishing Baby Owl to “stay!”.  That command doesn’t quite work as well with Eastern Screech owlets as it does with dogs.

Actually, “stay” doesn’t work very well with my dog, either. 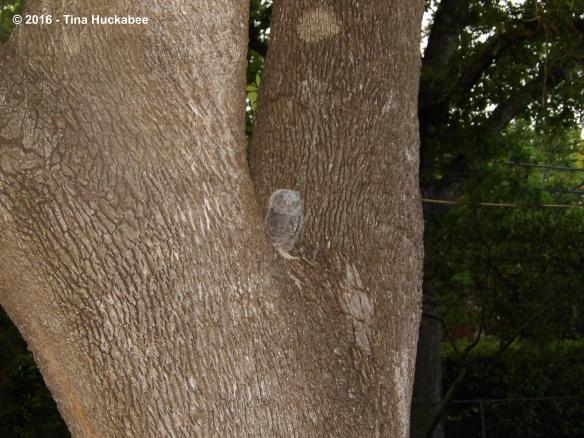 Within a couple of minutes, the owlet flew from the safely of the tree to the middle of the large back yard, just beyond the pond,

…and we decided to let Mama and Daddy take care of Baby Frankie(y). There was no real fear of cats or dogs bothering the owlet and we thought it was best to let Mom and Dad take matters into their own hands.  Er, wings.

Let me remind you, dear readers, that all this avian drama happened PRE-COFFEE! Yes, no caffeine was involved and I would very much appreciate a virtual pat-on-the-back for my rather lame attempts of wildlife rescue prior to my morning fix.

So, basic math suggests that with 5 eggs laid and 3 owlets out of the nest box, there is a theoretical possibility that there are two owlets left to fledge.

Mid-day Tuesday, this little cutey was clinging to dear life on an oak tree branch after its daring daytime escape from the nest box. 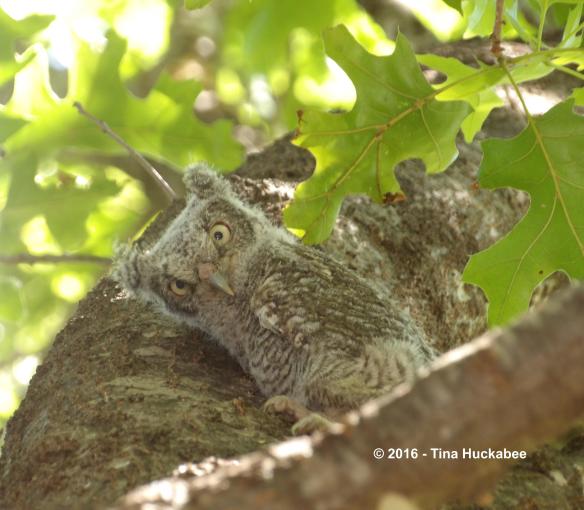 This is owlet #4, named Fritz.  Though, she could be a girl owlet–I don’t know, they all look alike to me.

Left to her own devises, Fritz managed to make her way near the top of the oak tree, where I could barely see her amongst the spring greenery.

The only reason I knew where to look for her is that the little song birds–Carolina chickadees and wrens and Cardinals–were fussing-up-a-storm about something at the top of the tree and my bet was that it was a an owlet who was the offending creature.  I was right.  But Fritz  was undeterred by the noisy little bird-pests and determined to stay in her leafy spot for the duration of daylight hours.

In the mean time, a fifth fuzz face was peeking out of the owls’ nest box–owlet #5, who I think I’ll call Jo–because I can.  As of Wednesday, Jo was still in the nest box, but I’m fairly sure that a plan of action to get out of there was in the works.  At about 9 pm Wednesday night, I stepped outside for a possible owlet look-see and in the sitting area underneath the oak tree was a little grey bit of fluff looking disgruntled.   I picked “Jo” up and place her/him in the Mountain Laurel just as Mama flew by me in warning.  I backed off immediately and moved to another part of the garden.  Mama watched for a bit and so did I, but I decided it was time to vamoose and to give the parents privacy to teach Jo to fly–if only well enough to stay in the trees for the night.

I thought the grey fluff on Wednesday night  was baby #5– Jo– but alas, Jo is still in the nest box as of Thursday afternoon.  Maybe it was Fritz?  Maybe Fritz never left the oak tree?  Who the heck knows? I’m sure that Mama and Dad Owl know who’s in and who’s out–and really, that’s all that matters.

Good luck to you all, little owlets: Jo–and Fuzzy, Frizzy, Frankie(y), and Fritz–may you  fly well and catch plenty of mice, rats, and other assorted yummies.

The excellent Eastern Screech parents raised 5 chicks to fledgling age–an impressive feat, I’d say. I’ve read that the predation rate for Eastern Screech Owl chicks is about 70%–that’s high–and it suggests that with well-learned flying and hunting skills, coupled with some good luck, 2, perhaps 3 of these babies will survive to adulthood.

I always miss the owls–adults and offspring–when the babies leave the nest box.   The intimacy of observing them daily, or almost daily, will cease and I’ll grieve a little bit for my loss, while celebrating their success of a family raised.  I never know which of the babies survives, but I’m sure to see some of them (and their parents) in the coming months, here or there, when I’m outside after sundown. In the next 10 weeks, the babies will be learning the skills they’ll need to improve their chances of survival and eventually, the parents will let them make their way, on their own, in the neighborhood and beyond.  By mid-summer, the owls will melt into the rhythm of the hot Texas summer days and nights and they’ll seemingly disappear. But I know they’ll be around, hunting late at night and resting during the day in the relative safety of lush and leafed out trees.

Later in the year, during some evening in late November or December, I’ll hear the gentle and melodic trill of a male Eastern Screech Owl for the first time in months as he’s looking for a mate, or letting his mate know that he’s found a nice spot in which to raise a family.